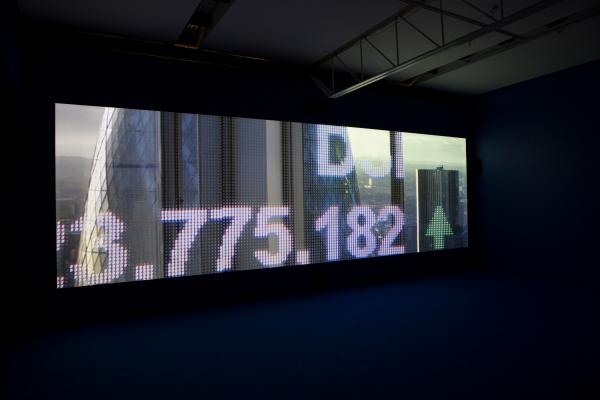 “Immaterial but Objective:” A Complication of Marxism in Isaac Julien’s "Playtime"

A British artist and filmmaker of Caribbean descent, Isaac Julien created his moving-image installation Playtime (2013–14) as a globalized and fragmented reboot of the 1967 French film of the same name directed by Jacques Tati. Each in their unique way, both films assign an aesthetic of isolation to the ironic loneliness of our increasingly interconnected world. Simultaneously set across three metropoles that saw major restructuring following the 2008 global financial crisis—London, England; Dubai, UAE; and Reykjavik, Iceland—the five vignettes in Julien’s film do not intersect at any point in the film. Capital, i.e. money, is their invisible—yet inescapable—common denominator. It’s the ubiquitous force that links the seemingly disparate lives of Julien’s archetypal characters of Hedge Fund Manager, Art Dealer, Reporter, Auctioneer, Artist, and House Worker; each tellingly defined exclusively by their profession.

Though it is not currently being exhibited at LACMA, another film from Julien’s oeuvre, a two-channel work titled Kapital (2013), is key to unpacking some of the denser themes in Playtime. Kapital shows a conversation between Julien and Marxist theorist David Harvey discussing the current state of capitalist society. The artist asks Harvey a question for which Playtime ultimately becomes a poetic response: “Why is capital so hard to depict?” Collectively, Playtime’s five vignettes offer a late-capitalist revision of proletarianism, illustrating the effects of introducing race and gender into the identity-neutral model formulated in Das Kapital. 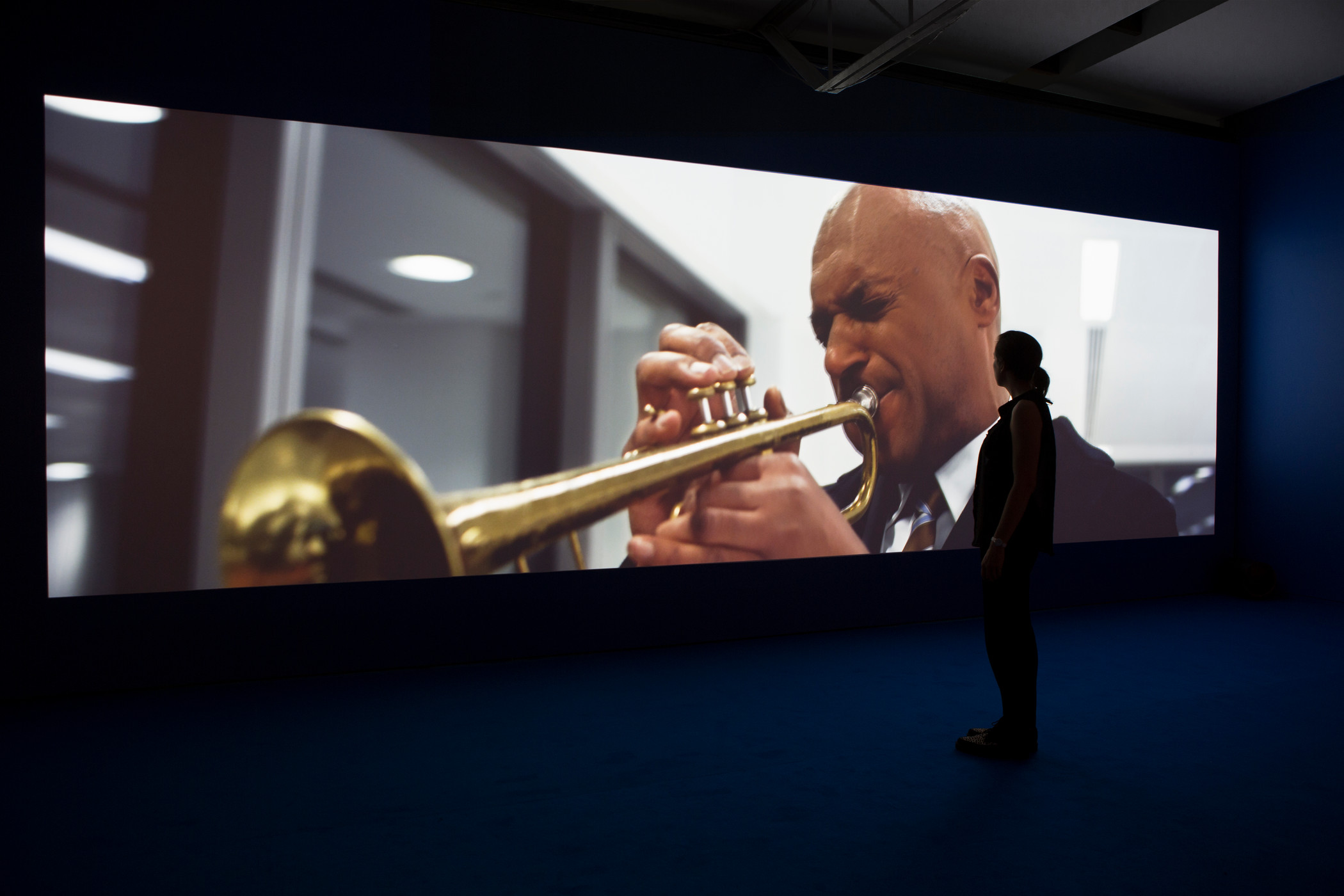 In the film’s first vignette, the Hedge Fund Manager (British actor Colin Salmon) stands in London’s central business district throughout the night while playing the trumpet—traditionally the “lead” instrument in a jazz ensemble and a symbol of his authority. Endless rows of windows in adjacent office buildings, still full of people toiling away, represent the masses he guides with his melody. During a conversation between Salmon’s character and a lower-level executive, the second man repeats a quote by David Harvey in Kapital in which he says, “you can’t grab it, you can’t hold it; you can’t smell it or touch it...it’s a bit like gravity.” The lower-level executive boasts about the hedge fund’s impending financial success, telling his superior that “Everyone, from our board to our cleaners” will directly benefit from their dealings. Julien complicates this stereotypical illustration of the contemporary “capitalist” class by showing executives from three separate strata within the company. Salmon’s character may have authority over the man he is speaking with, but their moment of levity is interrupted by the CEO (played by Diane Henry Lepart, the real-life Founder and Managing Director of the London-based investment firm FEND Capital Partners Limited). The Hedge Fund Manager suddenly looks guilty and becomes much stiffer in her presence. Is he a true “capitalist” if he, like the proletariat, is evaluated by his productivity and responsiveness to authority? 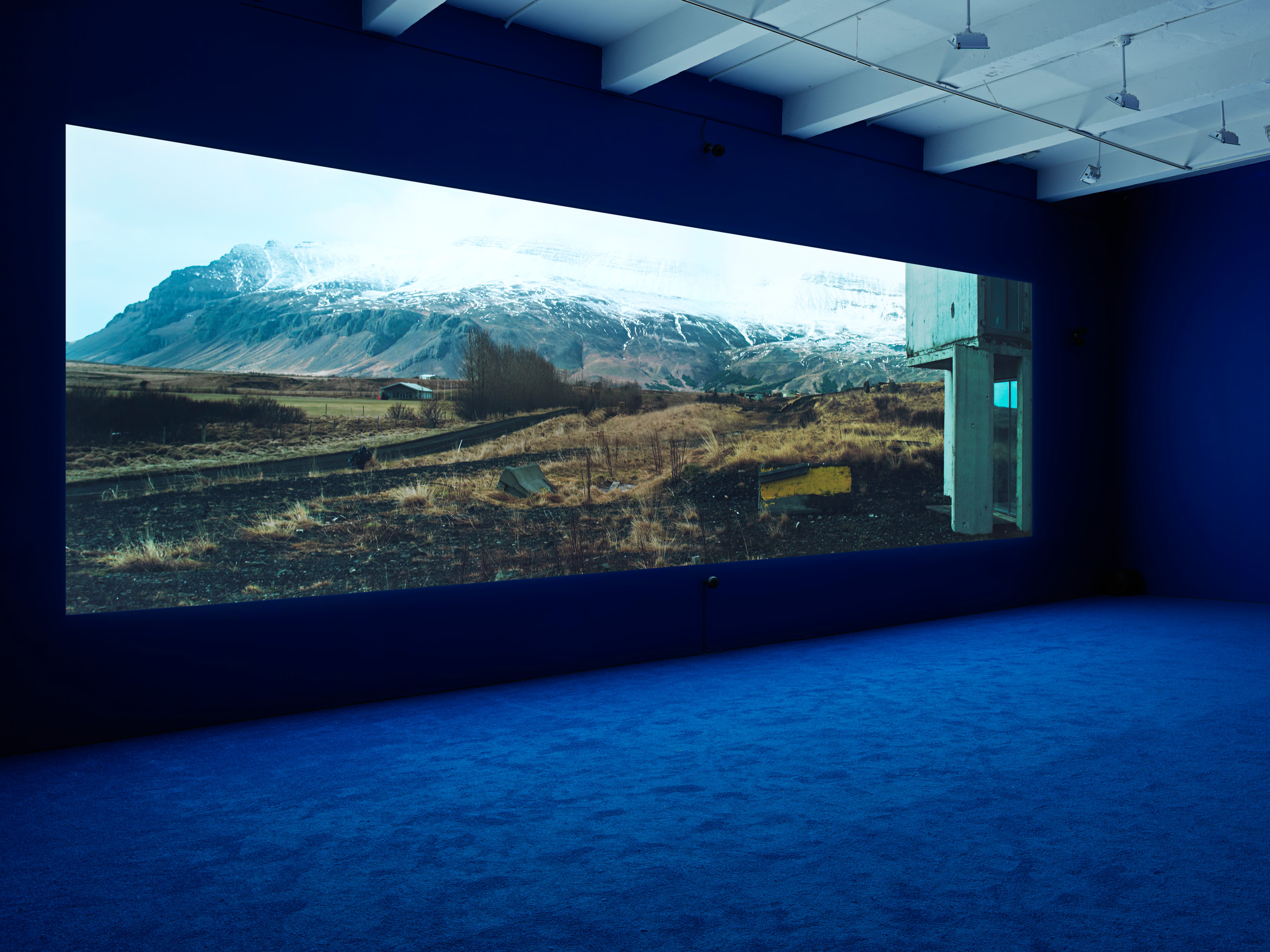 Playtime’s second vignette takes the spectator from London to Reykjavik, Iceland. This snowy, industrial landscape becomes the backdrop against which to observe the Artist as he suffers through a depression brought on by his financial ruin and eventual loss of spouse and home. Played by Icelandic actor Ingvar Eggert Sigurðsson, the Artist recites a monologue that closely recalls countless harrowing stories from the 2008 financial crisis. He speaks angrily of the process of acquiring a mortgage to finance his purchase of a dream home, “...anyone could go to the bank and get a loan for anything.” In one instance, the shot lingers on a faux magazine titled Market atop a coffee table within the home, and a headline that reads, “A View from the Top.” This is to be taken ironically, as this unfolding vignette instead offers a “view from the bottom.” Julien leans into the linguistic connection of low points in both financial and mental health—the nomenclature for both is “depressions”—by using a shadowy, nearly monochrome palette to represent a fate that many proletarians suffer firsthand. The likely exoticism of the Icelandic landscape to many of Playtime’s spectators brings an uncanny dynamic to this tragically relatable story.

Countering the nadir of the Icelandic vignette, the camera follows an Art Dealer as he ascends a flight of stairs, while the non-diegetic echo of an auctioneer is heard exclaiming increasing monetary values. Once he reaches the top of the stairs, the Art Dealer (played by American actor James Franco) struts around a quintessential white-cube space with prohibitively expensive works of contemporary art on the wall. He recites a monologue that identifies the 2008 global financial crisis, as well as the internet, as major catalysts in the exponential growth of the art market. He goes on to declare that the financial crisis caused such a mistrust of “esoteric financial instruments” that the investment into art, antiques, wine, and other luxurious collectibles piqued the interest of the wealthy. This narrative serves to reveal the proletarian status of the art maker relative to the capitalists who invest in their practice. The Art Dealer refers to specific paintings on the wall by the full name of their creators: “The Glenn Ligon,” “The Roy Lichtenstein,” etc., insinuating that the objects are disembodied pieces of the makers themselves. Julien chooses this third story for his own cameo because it most closely exemplifies the connection between him and the labor he is performing. The fact that the white-cube setting is the artist’s own representative gallery, Victoria Miro Gallery in London (where Playtime ultimately premiered) underscores this scene’s self-reflexivity. 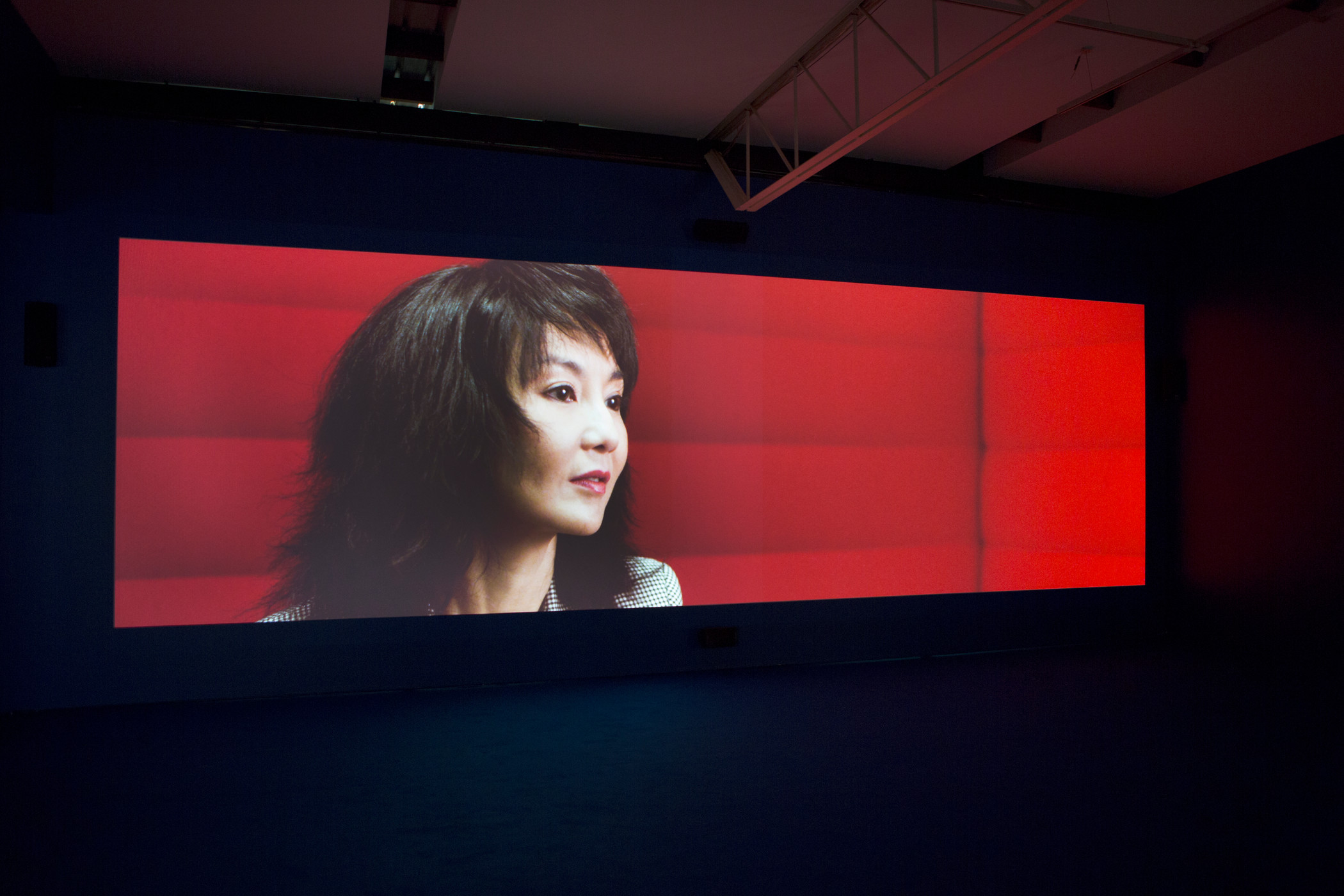 Julien begins the next chapter by introducing the character of the Reporter (Chinese actor Maggie Cheung) visiting the offices of real-life auctioneer Simon de Pury to interview him about his insights into the workings of the art market. De Pury reveals the stress he feels before an auction, the enormous responsibility and pressure to perform—literally entertain the audience—in a way that will maximize sales. As they sit on a red sofa that recalls the color of the Chinese flag, the Reporter asks the Auctioneer about his affinity for superstition. “You know, in China we are very superstitious, too,” she adds. This allusion to the capricious and often arbitrary reality of financial speculation is visually underscored in Playtime’s immersive installation in LACMA’s Resnick Pavilion, as the red in the scene sharply contrasts with the commanding royal blue of the carpet and walls that surround the viewer. By spatializing the dialectical relationship of red and blue, Julien hints at the tensions between communism and capitalism, as well as East and West. 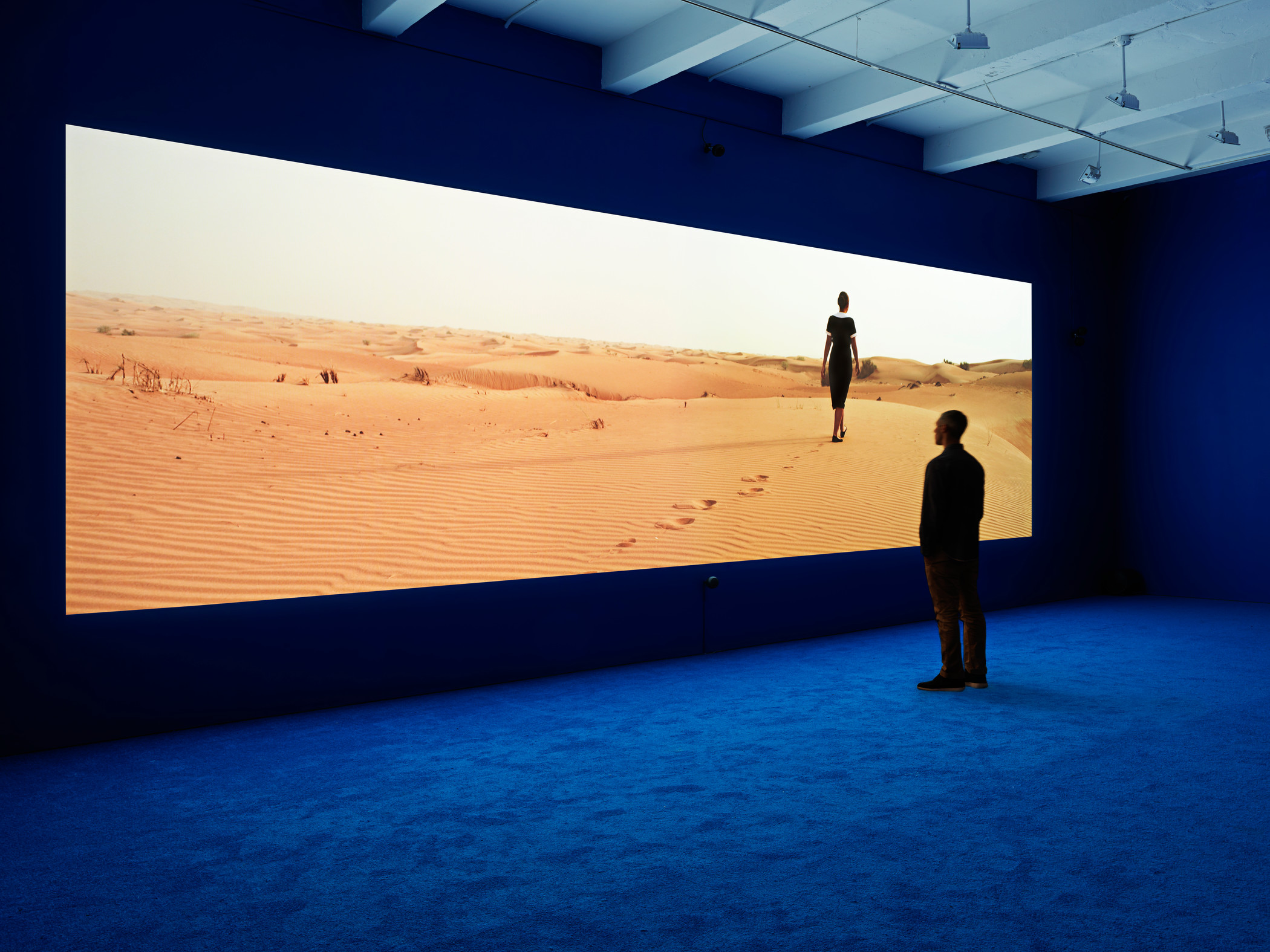 Playtime’s final vignette opens on an expansive desert where the House Worker (Filipina actor Mercedes Cabral), dressed in a modest black-and-white uniform, walks alone. She looks out into the dunes and tearfully recounts how she migrated to the Middle East in order to support her young children in the Philippines. The story then cuts to a busy night in downtown Dubai. Shots of the trading floor, filled with men in full-length thobes, are intercut with images of the House Worker’s commute on an elevated train. She eventually arrives at a soulless penthouse tastefully decorated with modern and contemporary art. Throughout her monologue, Julien occasionally cuts to the construction on the edges of Dubai as evidence of the bustling economy of which Cabral’s character is both victim and participant.

In Playtime, as he does in his larger oeuvre, Julien appropriates the resources and aesthetics of Hollywood and the art market, weaving these together with theory, social critique, and a “politics of the image” to create a genre wholly his own. Julien expands on Édouard Glissant’s idea that Caribbean subjecthood is indelibly wounded and fragmented due to the lived experience of colonization to include the global flow of labor and capital across geographies and systems. This manifests in his approach to filmmaking, one that he likens linguistically and culturally to creolization as a “broken mixture of different languages.” In Playtime, each of the characters helps to convey Julien’s concerns with migration, race, class, and gender, as well as the cardinal question of how identity affects an individual’s earning potential and social mobility. Julien revisits several motifs throughout the film—the verticality of power in urban settings versus the horizontality of impotence in less developed landscapes; the invisibility of capital; the art object as a substantiation of capital; and the questionable morality of wealth—to facilitate nuanced commentary on the geopolitics of the global economy.

LACMA’s presentation of Playtime is the film’s Southern California debut and exemplifies the museum’s engagement with topics such as geopolitics, identity, class, and migration, as well as its mission to contextualize contemporary art and film from the museum’s permanent collection, of which Playtime is a part. Isaac Julien: Playtime is on view in the Resnick Pavilion through August 11, 2019.

This text was condensed and edited from a longer seminar paper written by Jennifer Cernada in fall 2018 as part of the LACMA-ASU Master’s Fellowship in Art History.