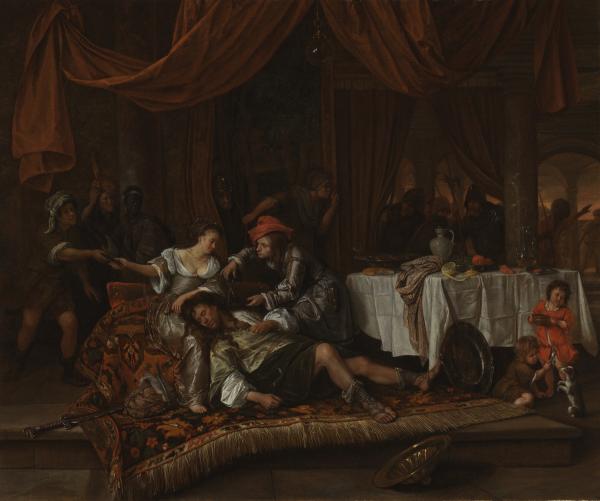 This three-part series of Unframed articles teases out the pictorial details of this painting and the historical circumstances occurring in 17th century Dutch society in order to tackle the question above. In doing so, these articles seek to unravel the layers of social relations and hierarchies gestured at in the 17th century Dutch painting.

The three questions below serve as roadmaps throughout the series.

The painting, for context, illustrates a climactic moment in the biblical story of Delilah, a Philistinian sex worker, and Samson, a judge from ancient Israel with superhuman strength. Samson falls in love with Delilah on his visit to her residence, in the city of Gaza, Palestine. In the painting, Samson is drunk and asleep after partying with Delilah and the other Philistinian characters who are pictured in the background. A cast of supporting Philistinian spectators bear witness to an unknown Philistinian character in a reddish hat about to cut Samson’s hair, the source of his superhuman strength. Delilah is holding the second pair of scissors. Steen contrasted Samson’s inebriated state with two children teaching a dog to stand for its food. While the two children serve as a visual reminder of obedience, Samson’s haircut is the byproduct of his own indulgence. “Samson lives in memory,” according to Suzanne Muchnic’s 1987 Los Angeles Times article about the museum’s acquisition of the artwork, “as an exemplar of sexual passion leading to destruction.”

Steen used lighting and elements of the theater to make clear that Samson, Delilah, and the unknown character with scissors are the protagonists of this painting. The painter juxtaposed the well-lit protagonists and colorful objects near the main characters (i.e., the rug) against the background of dimly lit, sketchily drawn supporting figures. Such a contrast directs the viewer’s eye to the protagonists. The billowy stage curtains at the top of the composition, the large-scale columns akin to Grecian pillars, and the host of ensemble actors watching the protagonists intently are theatrical details that create a visual stage for the pinnacle moment to unfold.

Even as these pictorial details place Samson’s “haircut” centerstage, an unnamed black figure with a pearl earring, an iron chain over their shoulder, and a head wrap positioned behind Delilah stands out. The subject’s wide-eyed gaze and hand gesturing toward a Philistinian spectator indicates the character is one of the supporting actors in the scene. The sole purpose of the dark-skinned onlooker is arguably to contribute to the air of drama looming over Samson’s fate. Yet, this article is interested in how the character’s presence and clothing unlock an opportunity to respectively think through the presence of black individuals in 17th century Dutch artworks and Dutch maritime imperial operations between the countries we know today as India and Sri Lanka. 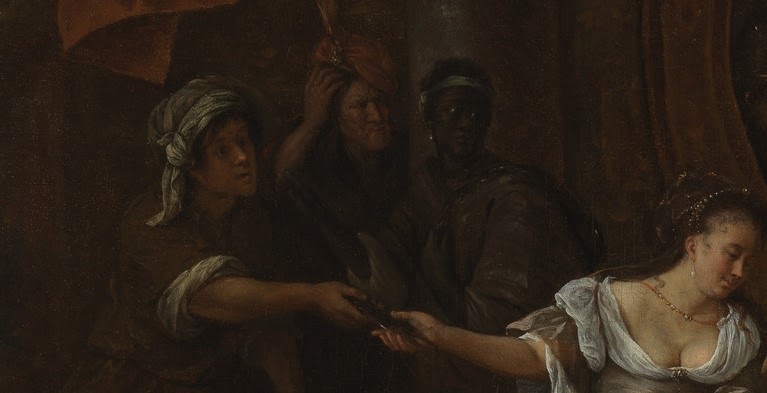 I am using the phrase “black figure” to describe our subject of interest, rather than use the term that Dutch citizens utilized in the 17th century. The Dutch Republic often deployed pejorative terms to characterize black individuals. For example, “Moor” was used to identify any person with a turban or darker-skin complexion, as well as any non-white Muslim individual, regardless of the person’s religious association or cultural heritage. Europeans more broadly applied the term Moor negatively to groups of black Muslim individuals who lived and ruled across Northern Africa, Spain, and Portugal from the eighth century onward. Terms like “Moor” obscure the unique, heterogenous qualities of a person, cultural heritage, and Indigenous groups.

This series follows the lead of the curators of The Black Figure in the European Imaginary at The Cornell Fine Arts Museum in referring to these characters as black figures. Utilizing the term “black figure,” which is more widely used in the later half of the 20th century and into the 21st, connects the subject of interest in the painting to individuals and networks of people on the African continent and in the African diaspora across time and space. For more discussion on describing black individuals in museum artworks, read about The Rijksmuseum's initiative to remove “racially charged” language from its collection.

This series also intentionally uses gender neutral language to describe the central character of inquiry. Such an approach refrains from including pronouns. Gender and the process of gendering non-white, non-European individuals are complicated matters in the history of slavery and imperialism. European slave and colonial business operations imposed and, in many ways, continue to impose European expectations about gender on enslaved and colonized populations. These regimes often distributed resources or punishment to these groups based on the group’s ability to follow colonial gender codes. This enforcement has resulted in not only the loss of many Indigenous knowledge bases about gender and identity, but also Indigenous lives. Gender neutral language is a strategy to acknowledge that the subject of interest, even if fictional, holds an unsettling relationship to Dutch gender rules. The second article in this series further delineates the uneven relationship between gender and the central subject. For examples on how museums and other cultural heritage institutions have grappled with the interconnected legacies of colonialism and gender, see write-ups about Iziko Slave Lodge in Cape Town, Kent Monkman's installation at the Metropolitan Museum of Art, and Stephen Small’s essay “Slavery, Colonialism and Museums Representations in Great Britain: Old and New Circuits of Migration.”

Why is there a black figure behind one of the painting’s protagonists?

Steen’s inclusion of a black character in Samson and Delilah follows suit with other white male Dutch and European artists more broadly in the 17th and 18th centuries. The increase in imagery with black subjects in Dutch art happened concurrently with the rise in population of, and exchange with, black families and communities in the Dutch Republic and the Dutch Republic’s increasing role in the global slave trade. Spanish and Portuguese merchants as well as Dutch privateers continued to enslave black persons at their homes in the Dutch Republic. Free black men occupied professions like soldiers, servants, and sailors and lived together with their families in areas like Jodenbreestraat (a predominantly Jewish neighborhood in Amsterdam). Modern Dutch historians Lydia Hagoort, Mark Ponte, and Dienke Hondius have published recent scholarship about the legal and social conditions of black individuals in the Netherlands in the 17th century.

Aside from depictions of King Balthazar in biblical paintings, black figures appeared in portraiture, still lifes, drawings, and genre paintings as unnamed characters without clear geographic origins. Seventeenth century Dutch artists depicted black subjects in a variety of roles, including merchants, ambassadors, enslaved persons, servants, and biblical characters. Artists like Albert Eckhout illustrated black characters from their own travels to Dutch colonies, while others like Rembrandt based their depictions on black residents in their local Dutch neighborhoods. The unnamed figures cannot be traced to a particular person in the life of the artist nor the person who commissioned the artwork. Museums have mounted exhibitions centered on unpacking these artistic representations, including the Getty’s 2019–20 show Balthazar: A Black African King in Medieval and Renaissance Art and The Museum Het Rembrandthuis’ (Rembrandt’s House Museum) Black in Rembrandt’s Time. Scholarship, like the multi-volume series Image of the Black in Western Art, has also attended to the aesthetic, historical, and political implications of these types of artworks.

The function of black individuals in Dutch artworks can be summed up by Dutch artist and theorist Samuel van Hoogstraten in his 1678 book Inleyding tot de Hooge Schoole der Schilderkonst (Introduction to the Advanced School of Painting), “Any form of animal or plumed fowl, decorates the work: so the eye also finds pleasure sometimes by maidens to add a Moor.” The pleasure Hoogstraten describes, as scholar Julie Berger Hochstrasser thoroughly analyzes in Still Life and Trade in the Dutch Golden Age, speaks to the role of the black figures as visual foils for white persons depicted and the objects they own. Such a contrast is rooted in defining the black subjects as inferior to the white Europeans they are pictured alongside. Dutch families, as an example, included black enslaved persons in their single or family portraits in order to flaunt that they were wealthy enough to own another person (see fig. 2). In still life, a type of work depicting inanimate objects, painters incorporated black individuals, both freed and enslaved, in compositions filled with fruits, textiles, jewelry, dishes, and other household items. These objects originate from European craftsmen or the Dutch Republic's commerce operations in non-European countries (see fig. 3). The driving force for these paintings to include black persons is to assert the figures’ status as a commodity and uplift the individual and nationalist sense of superiority white Dutch individuals projected. Moreover, the images serve to make invisible the processes of trade, colonialism, and slavery that brought the objects as well as black people to the Dutch Republic.

The reason for Steen’s inclusion of the black figure in his painting Samson and Delilah is unknown. Based on Hoogstraaten’s quote, one could speculate such incorporation is for the purpose of adding another visual detail to the composition. Another speculation is that Steen included the turbaned individual in the painting to gesture at black passersby he may have encountered in his town of Leiden and places he visited. Regardless of intention, the subject in Steen’s biblical painting reflects a subtler form of visual hierarchy than still lifes and portraiture. The black figure is faintly pictured in a group of other characters in similar lighting and dress conditions, rather than explicitly compared to objects. This subject “magically” appears in the painting, or without context about how the figure relates to the other subjects depicted. Whereas Samson and Delilah possess clear backstories and names, this character’s origin, or who the source of Steen’s inspiration for this figure was, is unknown. The second layer of hierarchy is between the character of interest and the Philistine supporting actors. The black body is the only one with a chain in the painting. Though the viewer cannot conclusively state whether the chain is a symbol of enslavement in this painting, the fact that the black character is the only one wearing a chain begs questions about how this black body relates to the Philistine individuals. The black individual’s unknown affiliations, name, and history generates the notion that this figure’s sole role is to spectate the lives and drama of the white protagonists.

Stay tuned for Parts 2 and 3 of this blog series where the following questions are investigated: Why is this figure wearing a pearl earring? Where did the pearl earrings seen by Steen originate?