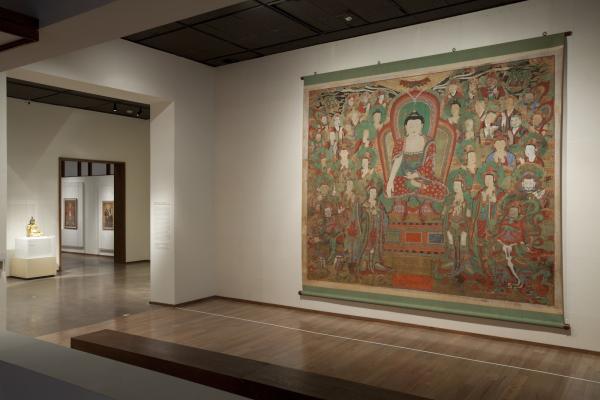 Yeongsanhoesangdo (Preaching Shakyamuni Buddha) in the Korean Art galleries in 2012

Last week, LACMA and the Jogye Order of Korean Buddhism entered into an agreement for the museum to return artworks believed to have been looted by United States Army personnel during the Korean War. The works to be returned are Yeongsanhoesangdo (Preaching Shakyamuni Buddha) and six portraits of Siwangdo (the Kings of Hell), which were originally housed in the Sinheung Temple (Sinheungsa) in Sokcho, Gangwon Province, in northeastern South Korea.

LACMA's relationship with the Jogye Order began in 2015. In January of that year, Director Michael Govan received a letter from the Jogye Order in Seoul, indicating that several Korean Buddhist paintings in LACMA’s collection had been reported stolen from Jogye Order Buddhist temples in Korea. The first of these, Jijang Siwangdo (Ksitigarbha and the Kings of Hell), had been reported in 1988 as stolen from the Yeombulan Hermitage, a Buddhist monastery, and the Order requested any known information regarding the work’s provenance. Curators Stephen Little and Virginia Moon in the Korean Art Department reviewed what was known of the work’s provenance prior to LACMA’s acquisition of the painting in 1994. After further investigation, in April 2015 Little wrote to the Venerable Jeong-an, the Jogye Order’s Director of the Department of Cultural Affairs, with a summary of the painting’s provenance. The painting had been purchased by LACMA in March 1994 from the Kang Collection, a Korean art gallery in New York City. Through further provenance research by LACMA, we learned in February 2015 from the Kang Collection that the gallery had acquired the painting in circa 1990 from Mr. Gene Schwanke in New York, NY, who had purchased the painting in the L.A. area in 1988. According to the Kang Collection, Mr. Schwanke did not remember the name of the seller from whom he acquired the painting.

Prior to LACMA’s acquisition of the painting in 1994, the work was published by the Asia Society in New York, in Hongnam Kim’s exhibition catalogue, The Story of a Painting: A Korean Buddhist Treasure from The Mary and Jackson Burke Foundation (exh. cat.) (New York: Asia Society, 1991), figure 17, no. 19. Following LACMA’s acquisition, Jijang Siwangdo (Ksitigarbha and the Kings of Hell) was published in 2012 in a new comprehensive bilingual (English and Korean) catalogue of LACMA’s Korean art collection, funded by the National Research Institute of Cultural Heritage (an agency of the Korean government): Korean Art Collection of the Los Angeles County Museum of Art, U.S.A. (Daejeon: National Research Institute of Cultural Heritage, 2012): cat. 256. Starting in 2008 the painting was continuously published on LACMA’s website as part of the online exhibition ​Geurim: Fine Korean Paintings at the Los Angeles County Museum of Art. The painting was also exhibited in LACMA’s Korean art galleries December 2000–December 2001; August 1, 2005–November 26, 2006; September 2009–February 2010; March 9, 2012–May 1, 2013; and January 8–February 23, 2014. 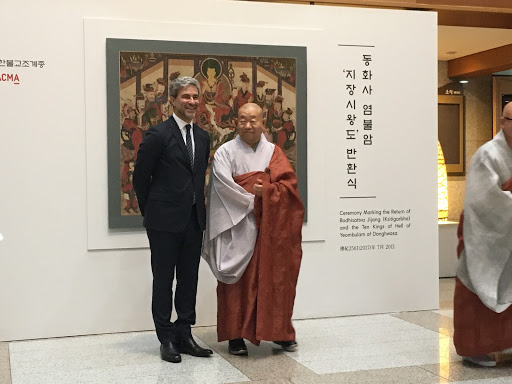 LACMA Director Michael Govan and Venerable Monk Jeong-hyun during the ceremony marking the return of Bodhisattva Jijang and the Ten Kings of Hell in Seoul, Korea, in 2017

In March 2016, the Venerable Jeong-an and other high-ranking Jogye Order monks and officials visited LACMA and met with Director Michael Govan, Senior Vice President and General Counsel Fred Goldstein, and curators Stephen Little and Virginia Moon. The delegation presented internal Jogye Order documents providing credible evidence of the theft of the painting from the Yeombulan Hermitage in 1988. After further discussion with LACMA staff, in July 2016, Michael Govan wrote to Venerable Jeong-an stating that LACMA was prepared to recommend to the Board of Trustees at its October 2016 meeting that the painting be returned to the Jogye Order. We thereupon recommended that this work be deaccessioned and returned to Korea. The formal return occurred at the headquarters of the Jogye Order in Seoul on July 20, 2017, in a ceremony attended by Michael Govan, Stephen Little, and Virginia Moon; this event was widely covered and reported by the Korean press in both Korea and Los Angeles. 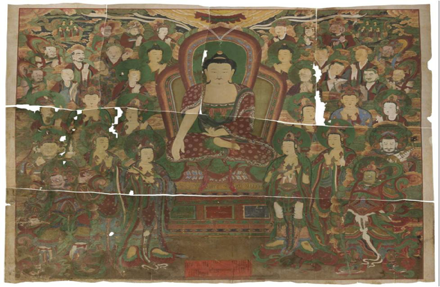 The other paintings reported by the Jogye Order in 2015 as having been stolen came from Sinheungsa and were acquired by LACMA in 1998. These were Yeongsanhoesangdo (Preaching Sakyamuni Buddha) and three sections of Siwangdo (the Kings of Hell). The Jogye Order provided LACMA with evidence that these paintings, acquired in good faith by the museum in 1998 from Mary S. French (who had discovered them abandoned in the attic of a house her son purchased in Hopkinton, New Hampshire), had been stolen from Sinheungsa in 1954, shortly after the end of the Korean War, by American army troops. Subsequent research in 2016 on these paintings, and a site visit to Sinheungsa in 2017 by curators Stephen Little and Virginia Moon, confirmed that Sinheungsa was the temple for which these paintings were commissioned in the 18th century, and in which the paintings were hanging in early 1954 (based on photographs taken at the temple in that year by U.S. army photographer Paul Buford Fancher). Other photographs taken at the same temple buildings in around October 1954 by Officer Richard Bruce Rockwell of the U.S. Marines indicated that the paintings had been removed from the temple’s halls by that time—notably during a period when the entire area, located only several kilometers from the Demilitarized Zone (DMZ), was under the sole control of the U.S. Army. As a result of the accumulated evidence, LACMA’s curators recommended to the museum’s Board of Trustees that these works of Buddhist art be deaccessioned and returned to Sinheungsa. 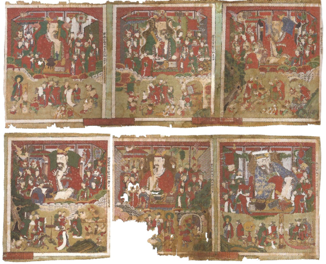 Siwangdo (the Kings of Hell) before conservation

Prior to this decision, the conserved section of Siwangdo (the Kings of Hell) was displayed in a special exhibition, Treasures from Korea: Arts and Culture of the Joseon Dynasty, 1392–1910 (organized by the Philadelphia Museum of Art and shown at LACMA in June 29–September 28, 2014), and both Siwangdo (the Kings of Hell) and Yeongsanhoesangdo (Preaching Shakyamuni Buddha) were exhibited in the LACMA-organized exhibition, Las Huellas de Buda (The Footsteps of the Buddha) at the Museo Nacional de Antropología in Mexico City in the summer 2018. We are pleased to report that these paintings will be returned to Korea in July, and reinstalled at Sinheungsa in Gangwon Province in a special ceremony in August 2020. 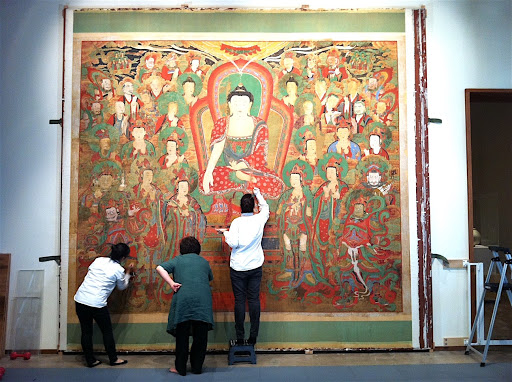 Dr. Park Chisun and her team conserving Yeongsanhoesangdo at LACMA in March 2012

A significant grant from the National Research Institute of Cultural Heritage’s Korean Art Conservation Fund enabled LACMA to arrange for three of the six images comprising the set of Siwangdo (the Kings of Hell) to be conserved in Seoul by Dr. Park Chisun at the Jung-Jae Conservation Center in 2007–09. In 2010–11, thanks to the generous support of Miky Lee and CJ Entertainment, LACMA was able to conserve the painting Yeongsanhoesangdo (Preaching Sakyamuni Buddha) at the museum by a team of expert Korean conservators led by Dr. Park Chisun. In exchange for the return of these sacred works of art to Korea, and in recognition of LACMA’s conservation of these works, the Jogye Order has agreed to collaborate with LACMA on various cultural initiatives, including loans of artwork from each institution to the other for short- and long-term special exhibitions, presentations of related educational programs, and exchanges of human resources. As LACMA curators we are delighted that these sacred Buddhist paintings will soon be returning to their proper home.