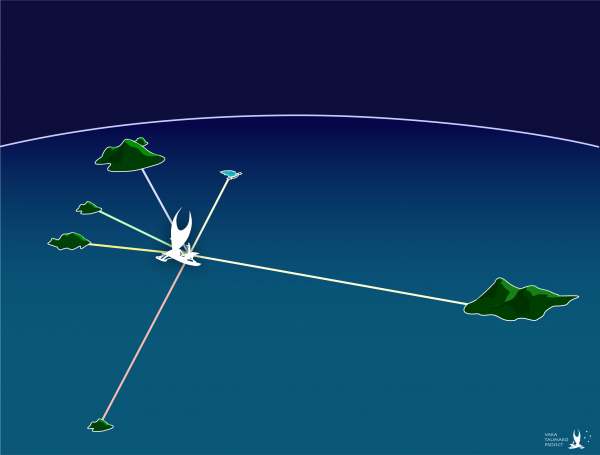 Diagram of a TePuke voyaging canoe in the middle of Temotu province, with lines of different colors connecting the canoe to islands and reefs, © 2020 Vaka Taumako Project and Duff Islands/Vaeakau people

With their project, Te Lapa: Polynesian Navigation Illuminated, 2020 LACMA Art + Technology Lab grant recipients Kyle McDonald, Daisy Mahaina from Vaka Valo Association, and Dr. Marianne George are documenting ancient Polynesian navigation techniques with new technologies. Of particular interest to this endeavor is "Te Lapa": a faint burst of light that emanates from land, but has never been recorded. Although COVID-19 has delayed some of their fieldwork, the group's preliminary efforts have provided some engaging documentation. McDonald reports on these flashes and how he has been working to capture their elusive presence. This project is supported in part by the LACMA Art + Technology Lab, and the National Endowment for the Arts.

For the last two years I have been in discussion with anthropologist Dr. Marianne "Mimi" George, regarding faint flashes of light on the ocean that show the way to land, known as "Te Lapa" ("the flashing"). These streaks of light have been used by many Polynesians and other Pacific peoples for centuries, but there are no photos or videos. Nearly 30 years ago the late Paramount Chief of Taumako, Koloso Kaveia, initiated the Vaka Taumako Project to teach ancient voyaging knowledge to his grandchildren, and enlisted Dr. George to help them to document ancient navigation methods for future generations. I'm applying my experience with imagining technology to the challenge of recording Te Lapa — in collaboration with Dr. George, and Taumakoan cultural documentarian Daisy Mahaina.

What is Te Lapa?

In Fiji, Te Lapa is called "talatala." It has been described by Tiu Tiua Bera of the Lau Group, Fiji:

It is a messenger that connects you and your ancestors. They show you the light. And that light will appear to you fast if you are connected to them. Otherwise you find it hard to see the light. You have families that have passed away, and always you must remember them. Must. They guide you when you are lost. And although they cannot appear by the form of a human, they show you their presence in the form of light.

I learned about Te Lapa in a paper by Dr. George, who was taught to identify Te Lapa by Chief Kaveia and by Dr. David Lewis. Dr. Lewis was in turn taught by expert navigator Tevake of Nifiloli atoll, and Bongi of Matema Island. Bongi crewed for Tevake, and Chief Kaveia was steersman when David Lewis sailed to Taumako with Tevake. Bongi described Te Lapa as a "compass to show where land is."

The first documentation of Te Lapa by outsiders comes from Dr. Lewis in his book, published in 1972, We, the Navigators: The Ancient Art of Landfinding in the Pacific. The most comprehensive published description of Te Lapa comes from Dr. George's 2012 paper "Polynesian Navigation and Te Lapa." The appearance of Te Lapa varies based on location, origin, and possibly other factors like swell patterns, but generally it is:

Given these qualities, we can identify constraints on the equipment we need to help document Te Lapa.

For the imaging system we are testing two solutions, both with a 50mm f0.95 lens:

These cameras will be combined with an external battery-powered recording system for multi-hour recording, and a gimbal for stabilization.

In preparation for eventually sailing on a boat for a few nights with experts from Taumako, I've been pushing the low-light capabilities of these cameras to their limits. The first test was off the Venice Beach breakwater, where we were able to capture the glint of Jupiter reflected in the ocean.

This glint was barely visible to my own eyes even after 30 minutes of dark adaptation. This is a great sign that a dynamic luminous phenomena like Te Lapa, on the edge of human perception, might still be visible to the right camera.

I also took the α7S II near a dark site in the desert, east of the California-Arizona border. It was a pleasant surprise to see details in the Pleiades and lens flare from Mars. This video gives hope for the possibility of identifying the exact path of Te Lapa by referencing GPS-located video against the background of the night sky.

The next steps are to complete the splash-resistant enclosure, power system, and mounting system for the camera rig — and to identify the right timeline and location for capturing Te Lapa in collaboration with navigators from Taumako. We hope to shoot our first test videos on the Pacific in Spring 2021, and record with Taumako navigators in August 2021, contingent on COVID-19 safety.

The Art + Technology Lab is made possible by YouTube Learning and Snap Inc. Additional support is provided by SpaceX.