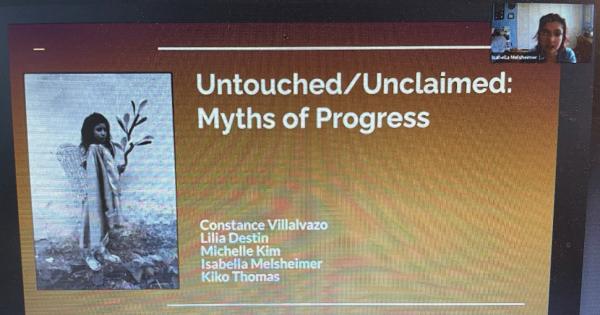 LACMA recently hosted its sixth Mellon Summer Academy, which, because of the continued COVID-19 pandemic, was a two-week virtual experience in 2021. The 15 undergraduate students still had eye-opening experiences learning about the inner workings of museums, considering multiple career paths related to art, art history, and other fields of study, connecting with their peers, and creating engaging final projects that showcase what they want to see on the walls at art museums. The Summer Academy is a component of the Andrew W. Mellon Undergraduate Curatorial Fellowship Program, which is generously supported by The Andrew W. Mellon Foundation.

For the 2021 Summer Academy's virtual exhibition project, the three student groups co-curated a virtual exhibition based on photographs from LACMA’s Marjorie and Leonard Vernon Collection. They selected photographs around a theme of their choice, researched the artists and artworks, wrote gallery text and object labels, determined the installation of the show, and considered outreach efforts and public programs to engage visitors. Each student group also had a Mellon Undergraduate Curatorial Fellow or alumna as an advisor on their project, enabling the participants to spend time with an individual who is in the next phase of the program. On the final day of the program, each group of students presented their exhibition ideas to the museum’s director, the donor’s family, staff, family, and friends.

Over the coming weeks we will take a closer look at each group’s final presentation.

Untouched/Unclaimed: Myths of Progress
Photographs from the Vernon Collection

Using images from the Vernon Collection at the Los Angeles County Museum of Art, Untouched/Unclaimed seeks to explore the romanticized imagery of rural and urban spaces created by photographers during the turn of the 20th century with a critical eye, bringing forward discussion of colonization and the innovation of industry at the cost of Indigenous communities.

The decades after the Civil War brought a sweeping transformation of North American lands. An industry boom demanded the construction of factories and urban centers, inspired thousands of Americans to move from rural areas to emerging cities, and attracted immigrants seeking new economic opportunities—the birth of the modern-day myth of the American Dream. With military protection and the financial capital of railroad barons, settlers of varying ethnicities settled in Western territories inhabited by Native tribal groups. It has been tradition to glorify this era of immense change, but recent dialogues reckoning with our nation’s history of race and colonialism require us to face this post-war industrial period with a practical and critical lens.

Manifest Destiny and the American Dream inspired settlers to move west with a sense of inherent ownership over sprawling territories “untouched” by European settlers. American artists, such as those in the Hudson River School and an emerging class of photographers, would develop a style of idealized pastoralism. However, history testifies that plains would be plowed over, bison eradicated and replaced by industry cattle, and Indigenous nations wiped out and exploited by settlers coming from the east. 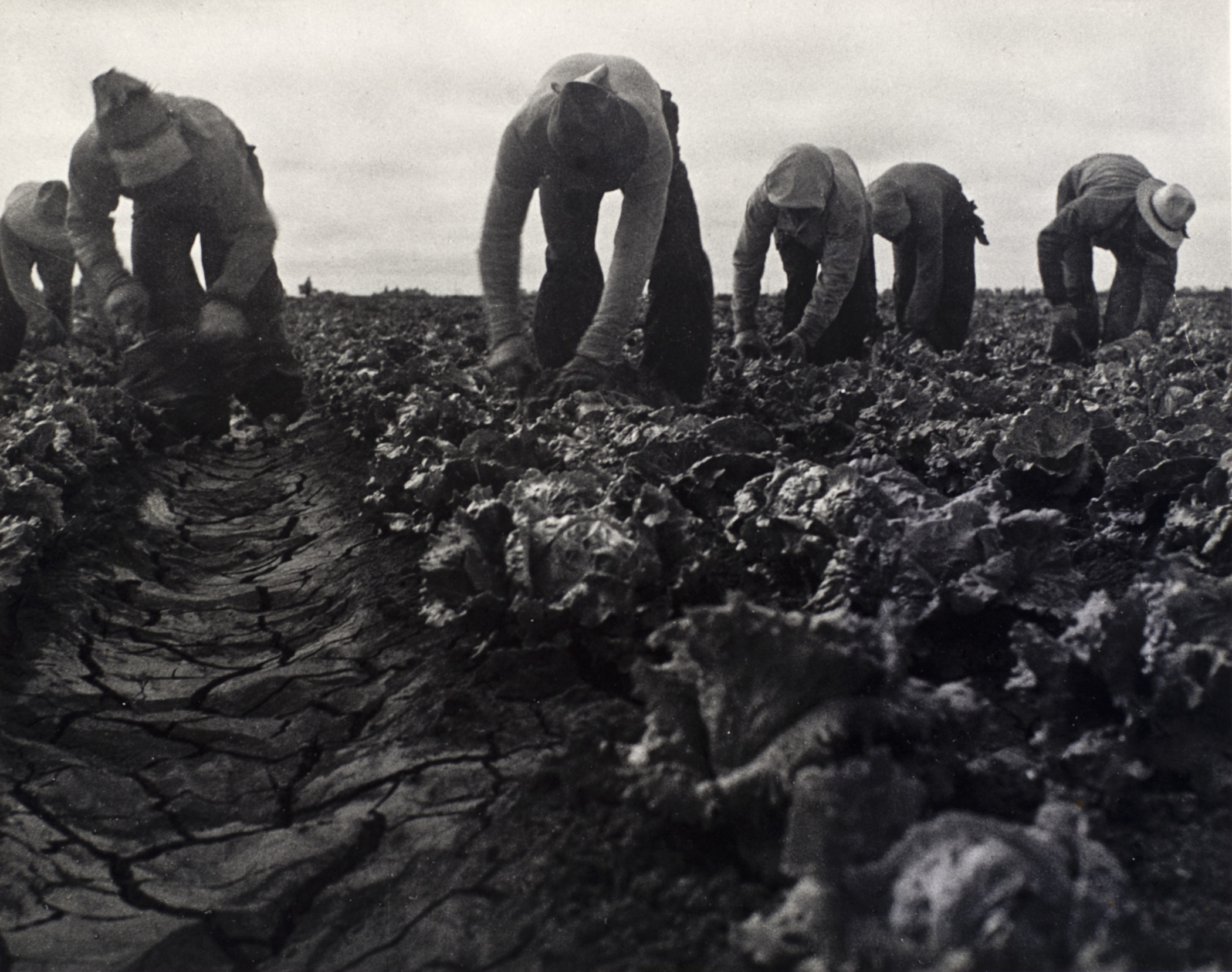 Lange photographed these six migrant laborers while employed by the Farm Security Administration in the 1930s. The work, alternately titled Filipinos Cutting Lettuce, gives a worm’s-eye view of the workers, whose obscured faces and uniformly bent posture give them a collective rather than individual identity. The cracked dirt path draws the eye upward towards the horizon where the stooping laborers are backlit against the light sky. 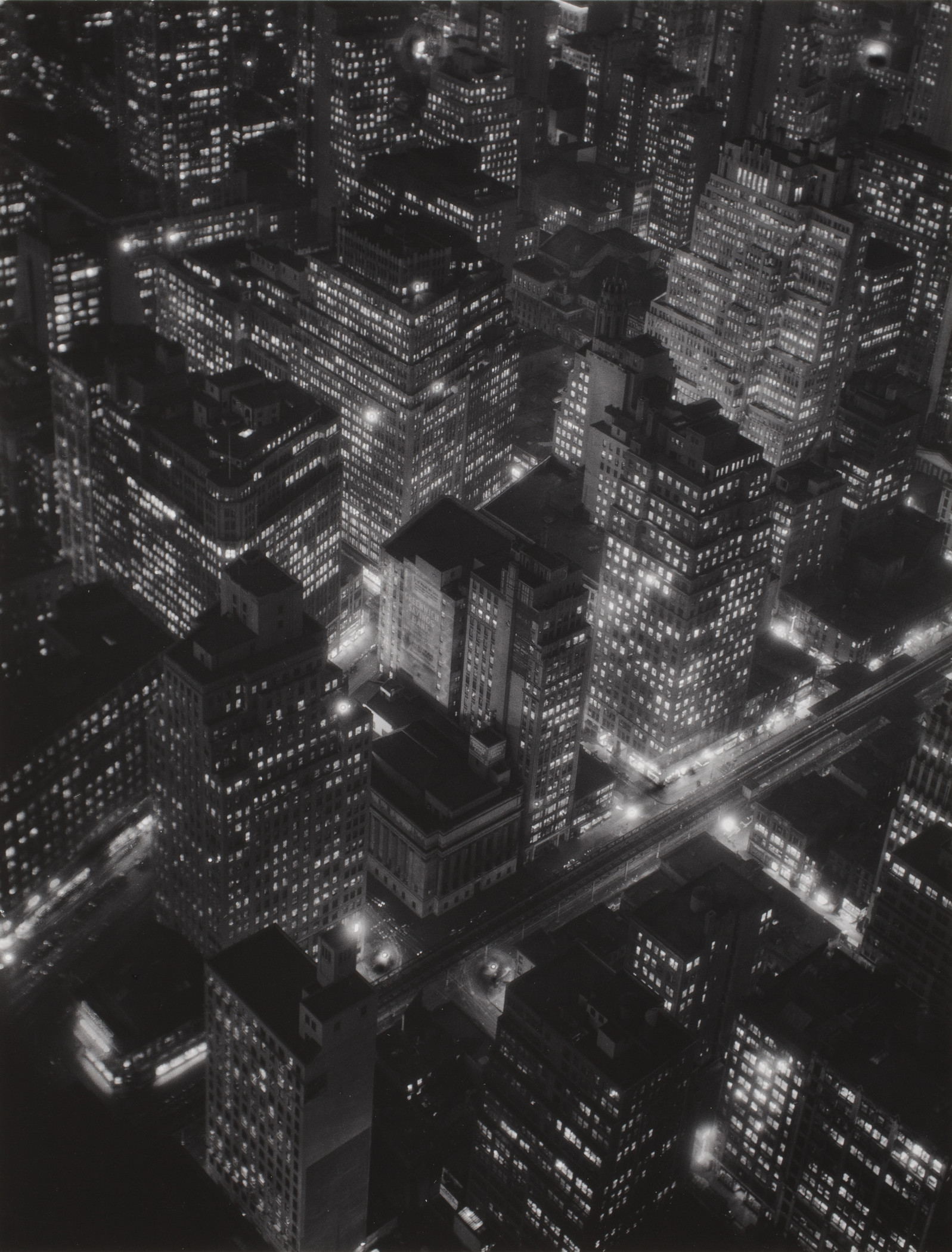 Abbott became best known for her photographs of New York City, with a focus on the city’s architecture, during the Great Depression. This bird’s-eye view of the city offers an unpeopled and romanticized view of the city at night, contrasting the crisp, dark forms of skyscrapers with glowing pinpoints of light. Abbot’s photo evokes movement, mystery, and excitement in its documentation of an old city encountering momentous change. 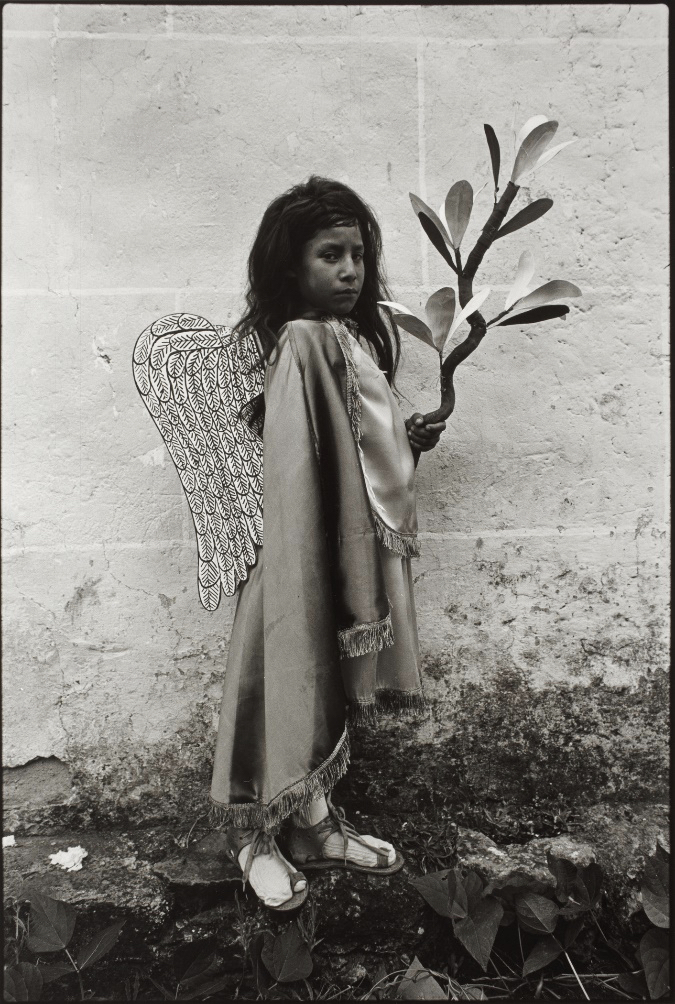 Following the death of her young daughter, Graciela Iturbide often focused on the iconography surrounding death in her native Mexico, as well as the cultural dichotomies between Indigenous cultures and European Roman Catholicism. This portrait was taken in the 1980s at the pilgrimage site of Chalma, once dedicated to Ozteotl (The Dark Lord of the Cave) but since dedicated to St. Michael the Archangel by Augustinian friars in the 16th century. The child’s costume may suggest purity in the context of a festival with pre-Hispanic roots, celebrating rebirth, as she goes before a holy site.

Proposed public programs for the show would include:

In a collaborative event, LACMA Education invites Meztli Projects to conduct a photography-based healing practice based on their current partnership project IndigenARTS and Wellness, which blends Indigenous practices with mindfulness and relevant dialogues through art making. The event will be molded to different age groups, and historical information and technical difficulty of the craft will be adjusted as well. Such an activity will bring Indigenous perspectives and practices to the forefront of the narrative presented in Untouched/Unclaimed. This free event will take place on the LACMA campus, utilizing the lawn’s open green space to connect visitors to nature while being surrounded by art at the museum. In addition to this activity, a leader or artist from the Meztli Project would be invited to participate in the exhibition’s podcast miniseries. The event will be advertised to LAUSD schools’ magnet and after-school program coordinators to reach teachers and students, L.A.-based photography student programs, and arts summer camps, as well as in publications such as the Los Angeles Times and LA Weekly. 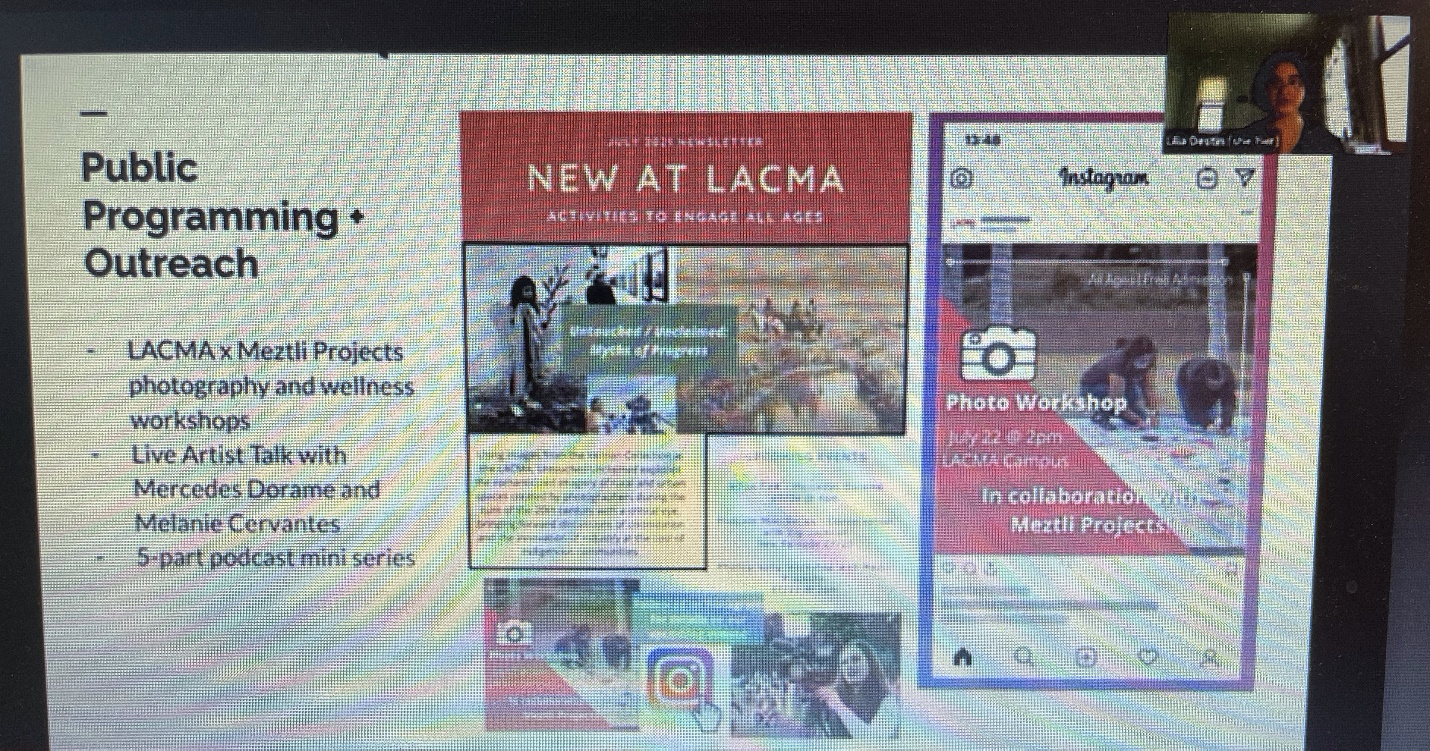 In addition to the episode featuring Mercedes Dorame and Melanie Cervantes, this five-episode podcast miniseries would feature Indigenous artists, including Indigenous photographer Zig Jackson, and art leaders as well as historians to further contextualize the materials within the exhibition. The series launch will be promoted on social media and in an email campaign through monthly and weekly newsletters.

Stay tuned for a look at the final exhibition idea presented during the 2021 Mellon Summer Academy. 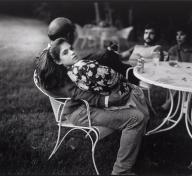 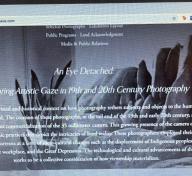 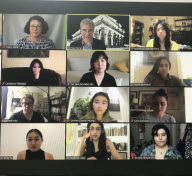