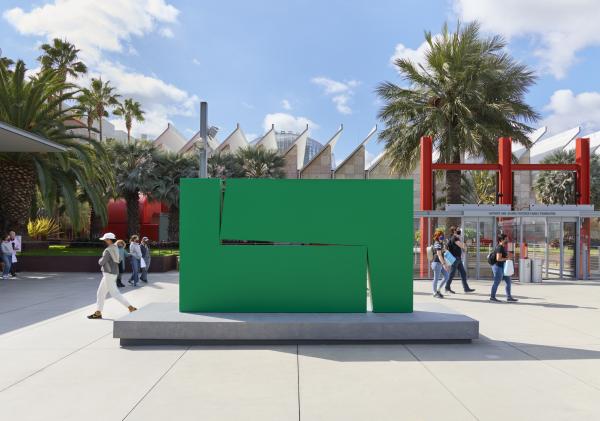 “I believe that I will always be in awe of the straight line,” Carmen Herrera once said. It’s a fascination that has kept the 106-year-old artist creating abstract paintings and sculptures showcasing bold, straight-edged geometry for more than 70 years. Her Estructura Verde, a seven-foot-tall aluminum sculpture painted a vibrant green, takes the form of a shallow rectangular box cleaved into two L-shaped parts, with a mix of irregular and perfect right angles forming gaps viewers may peer through. The work, on view on LACMA’s Smidt Welcome Plaza, represents the culmination of a decades-long career dedicated to “beauty of the straight line” in which the artist, with her iconic formal purity, explored similar angular constructions across a variety of media.

Now considered one of the preeminent minimalist artists of her time, Herrera was largely unknown during most of her highly prolific practice. She initially trained as an architect in her hometown of Havana, and this background expresses itself in her signature hard-edge style, developed over decades of painting in the U.S. and France. Herrera’s crisp compositions featuring contrasting planes prefigured the emergence of Minimalism by almost a decade, and although her clean geometric abstraction could have been exhibited alongside groundbreaking Minimalists like Ellsworth Kelly and Frank Stella, she faced significant discrimination in the art world both as a woman and an immigrant.

Although her work was rarely displayed publicly, “being ignored is a form of freedom,” she said. “I felt liberated from having to please anyone.” After decades of developing her masterful style of crisp lines and chromatic planes free from the pressures of contemporary trends, Herrera garnered increasing attention for her work starting in the 1990s with a smattering of shows in the United States and Europe, until finally, in 2016, a solo show at the Whitney Museum catapulted her to major art-world recognition at the age of 101.

Compared to her paintings and works on paper, Herrera’s sculptures, especially the series from which Estructura Verde derives, were virtually unknown until recently. Although she conceived of her large-scale monochromatic sculptures beginning in the 1960s with a suite of diagrammatic sketches, the proposals to bring the experience of her luminous paintings into three dimensions remained unrealized until the 2000s. Of all her works, Estructura Verde might document her evolution from painting to sculpture most clearly: fabricated in 2018, it takes her Blanco y Verde (1966–67)—one of a series of paintings on canvas in which thin wedges of colored paint break through flat expanses of white, whose form was later realized as a yellow wall-mounted wood sculpture in 1971—and inverts the composition, allowing the work’s surroundings to emerge from the slivers of negative space between the two pieces of green metal.

LACMA’s installation of Estructura Verde is the first presentation of Herrera’s sculpture on the West Coast, a unique opportunity for visitors to experience Herrera’s masterful use of bold color and clean line as they interact with the daily movement and rhythm of the Smidt Welcome Plaza.