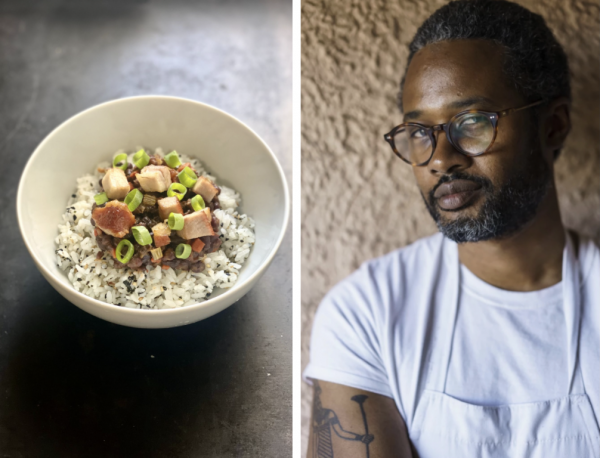 Cooking with LACMA is a series where chefs and culinary historians demonstrate recipes inspired by artworks at the museum.

This recipe for Red Beans & Rice from artist and chef Ray Anthony Barrett is inspired by Mercedes Dorame's work in the exhibition Family Album: Dannielle Bowman, Janna Ireland and Contemporary Works from LACMA, now on view at Charles White Elementary School. RSVP to a virtual event on April 14 to see him demonstrate his dish live. He will also be answering questions from the audience.

I had the opportunity to talk to Barrett about his background in food and art and his dish inspired by the exhibition.

Tell us about yourself.

My name is Ray Anthony Barrett. I’m a visual artist and chef. In 2016, I put my art career on an indefinite hiatus to train under Michelin-starred chefs. A couple years later, I launched a critically acclaimed pop-up called CINQVÉ (pronounced seen-kay) that traces soul food from Southern California to its West African origins. However, when the COVID-19 pandemic locked everything down, including my plans to grow my food business, I just couldn’t imagine pivoting. I felt that the moment required more from me than preparing takeout orders.

After an existential crisis, I realized that art was the only way for me to fully express my concerns. I’m currently working on a project with Active Cultures called Go Tell It On the Mountain. The ongoing commission unpacks my seven-month performance of traveling the American West in search of ancestral and Indigenous ecological wisdom. 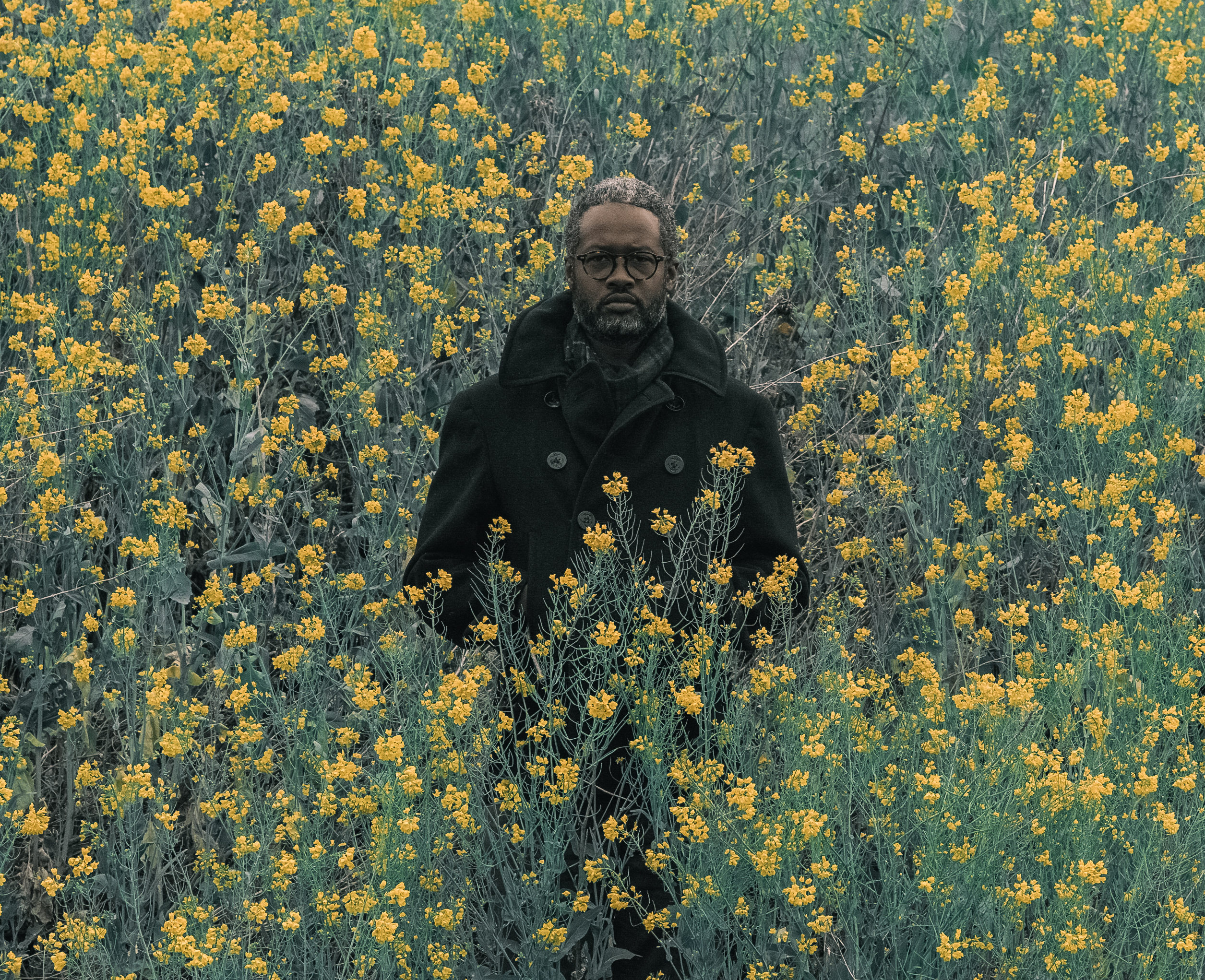 You have an interesting background in visual art and food. Can you share more about how these two interests intersect, and how they have inspired your work?

Food is an exceptional medium, insofar as it’s able to ground abstract conversations about class, access to land, labor, social justice, and climate change into something tangible. It literally comes from the ground. All of our senses engage with it. It's arguably the most important manifestation of culture, because we all have to eat. There’s tremendous relatively untapped potential to connect with people through food, because communities are built on communion.

I was deeply concerned with the divisions and systemic problems exposed by the pandemic and what it implied for how we would respond to the challenge of climate change. If we want to move in the direction of a more sustainable lifestyle, I believe our culture must address its problematic relationship with the land and food production. Art allows me to elaborate on themes embedded in my work as a chef. My visual essays, film, sculpture, photography, quilts, and drawings unpack them from multiple angles. They feed each other. 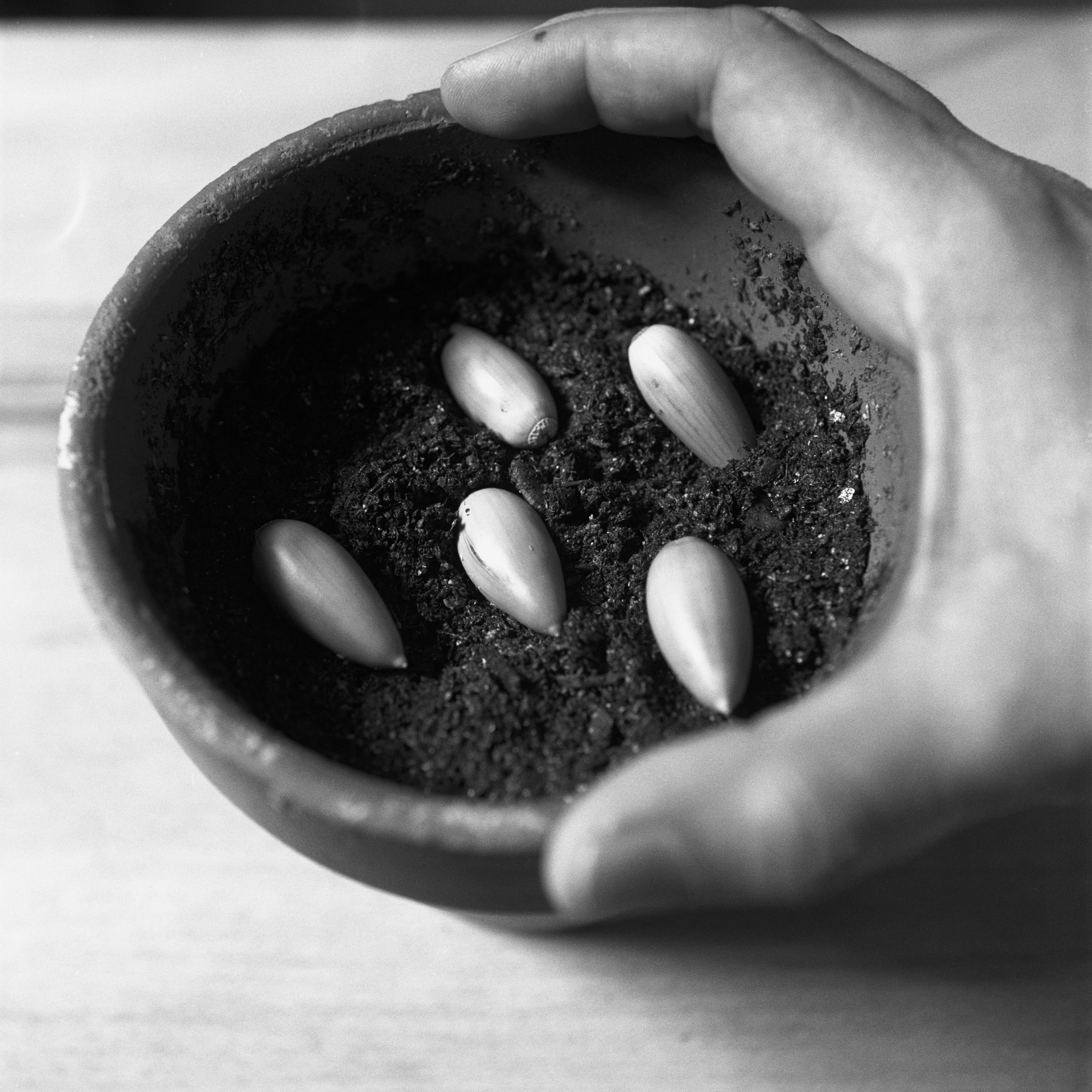 We invited you to create a recipe inspired by works in the exhibition Family Album at Charles White Elementary School. Which artwork did you pick? What drew you to the artwork?

Mercedes Dorame’s photo of a bowl of acorns in soil entitled Future Generations - Toomshar 'Eyootaarxen. There’s so much in this photo that defines the concept of what is an heirloom. In gastronomy we talk a lot about terroir—soil—and how much the stewardship of the land is a determinant of flavor. Healthy soil produces more delicious ingredients and livestock. But this piece carries with it a specificity with regard to the stolen land that became California. Dorame’s Tongva ancestors and many other tribes along the Pacific Coast utilized acorns as a staple in their cuisine. It takes a lot of work to remove the tannins to make acorns palatable. This photo represents ingenuity, resilience of ritual, and what we pass on to nourish the minds, bodies, and souls of our children.

It is also indicative of the type of agricultural practices erased by genocide and settler colonialism. The imperialists imposed their will on the land instead of listening to what the land wanted to provide. Their great-grandchildren now suffer from wildfires that the Indigenous people knew how to mitigate with controlled burns. But the seeds of indigeneity are always present if we know where to look. With ecological humility we can recover them and begin to heal. 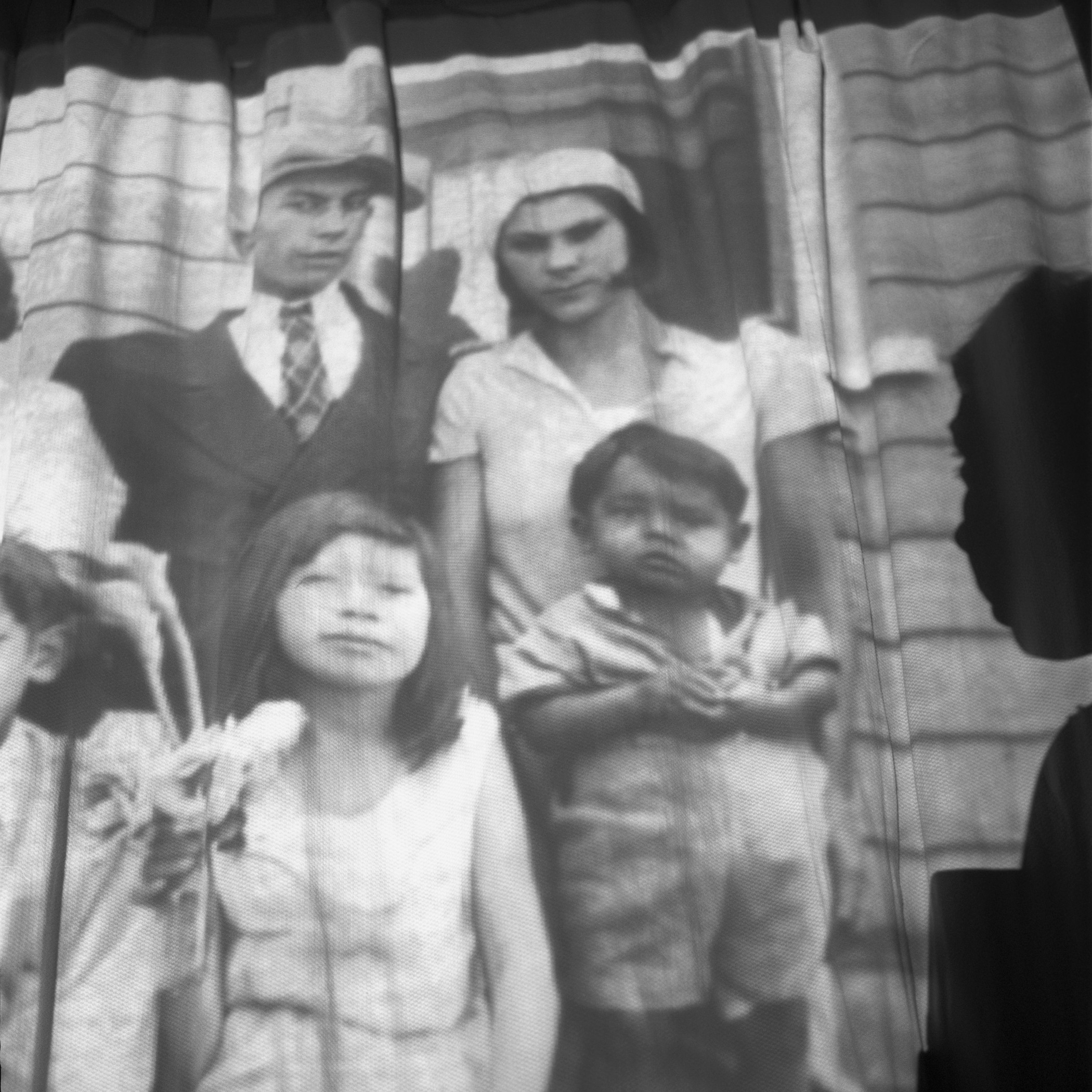 Note from curator Dhyandra Lawson: “Mercedes Dorame brings her Tongva elders into her daily life in her series Living Proof. She projected 120mm film images of family members inside her apartment, and made photographs of the scenes. In the work Always Present - Honuukvetemme’ Woont ‘Ekwaa, Dorame peers into a picture of her grandparents in front of their West L.A. home in the 1920s—their neighbors petitioned the family from buying the home even though their ancestors have inhabited Los Angeles lands for millennia. Dorame paired the family image with a picture of a bowl of acorns in soil, in honoe of her great-grandmother, a healer. Poring through family pictures, Dorame explored sensations of intimacy and dissonance, and her relationship to her family’s homeland, Tovaangar.”

You decided to make Red Beans & Rice in response to Future Generations - Toomshar 'Eyootaarxen by Mercedes Dorame. Can you tell us about your thought process, and how the dish relates to the photograph?

Yes, I’m making Red Beans & Rice for a few reasons. In nearly every region of the world there’s a dish with some combination of rice and beans. But it’s most common throughout the Americas and the African continent. In the United States, the American South in particular, Hoppin’ John and Red Beans & Rice are the most popular. Largely due to the influence of enslaved Africans who adapted West African dishes to new ingredients on the other side of the Atlantic. 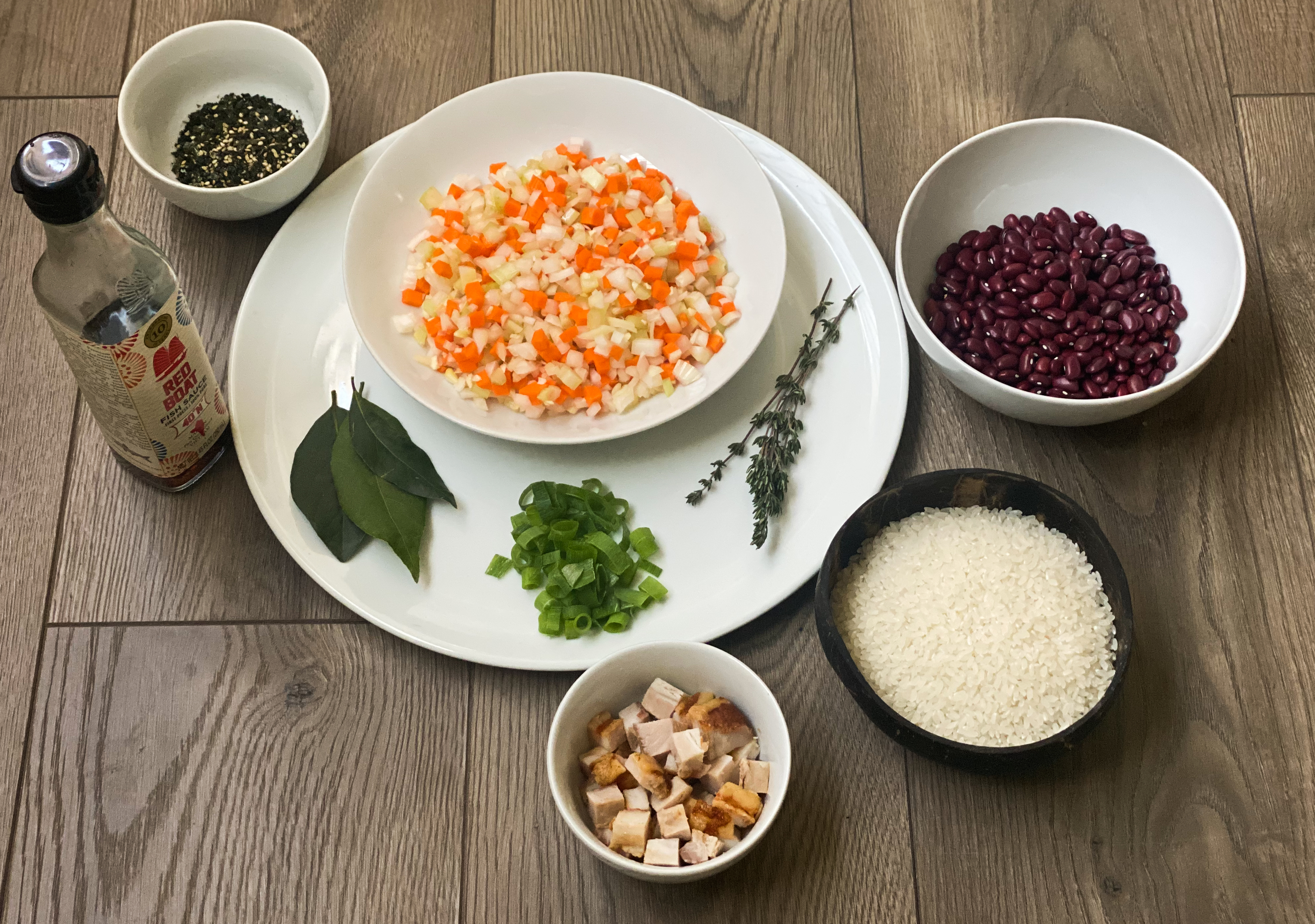 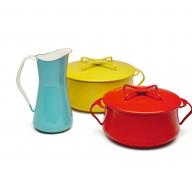 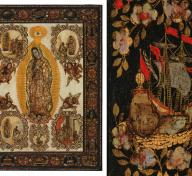 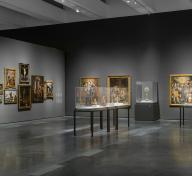