Seeing Double: The Stereoscope in City of Cinema

LACMA is pleased to celebrate Stereoscopy Day! June 21 marks the day in 1838 when English inventor Sir Charles Wheatstone officially presented his theory of binocular vision and a device to demonstrate it: the stereoscope. Although Wheatstone’s interest came out of his research in experimental physics, his Victorian contemporaries quickly realized that the discovery could have widespread appeal. Starting around 1850, the stereoscope became a worldwide sensation, endorsed by advocates who extolled the entertaining and educational potential of the new invention.

Binocular vision, or two-eyed seeing, is the means by which humans achieve depth perception and spatial orientation. It is a process that happens so quickly we are hardly aware of it, but it involves a complex neurological relay. Our left and right eyes receive slightly different, two-dimensional retinal patterns. (You can demonstrate disparity between the images received by the two eyes by raising a thumb in front of your face, closing first one eye and then the other, and noticing the way the background seems to move in relation to your stationary thumb.) Retinal neurons communicate with other neurons in the visual cortex, where the two images are fused into a single, three-dimensional image of objects in the world. Wheatstone discovered that pairs of drawings or photographs could be directed to the left and right eyes with mirrors or lenses, triggering the magical effect of three-dimensionality. This opened up the possibility of 3D art, which has been achieved in various formats, from stereographs to 3D movies to the View-Master to virtual reality. 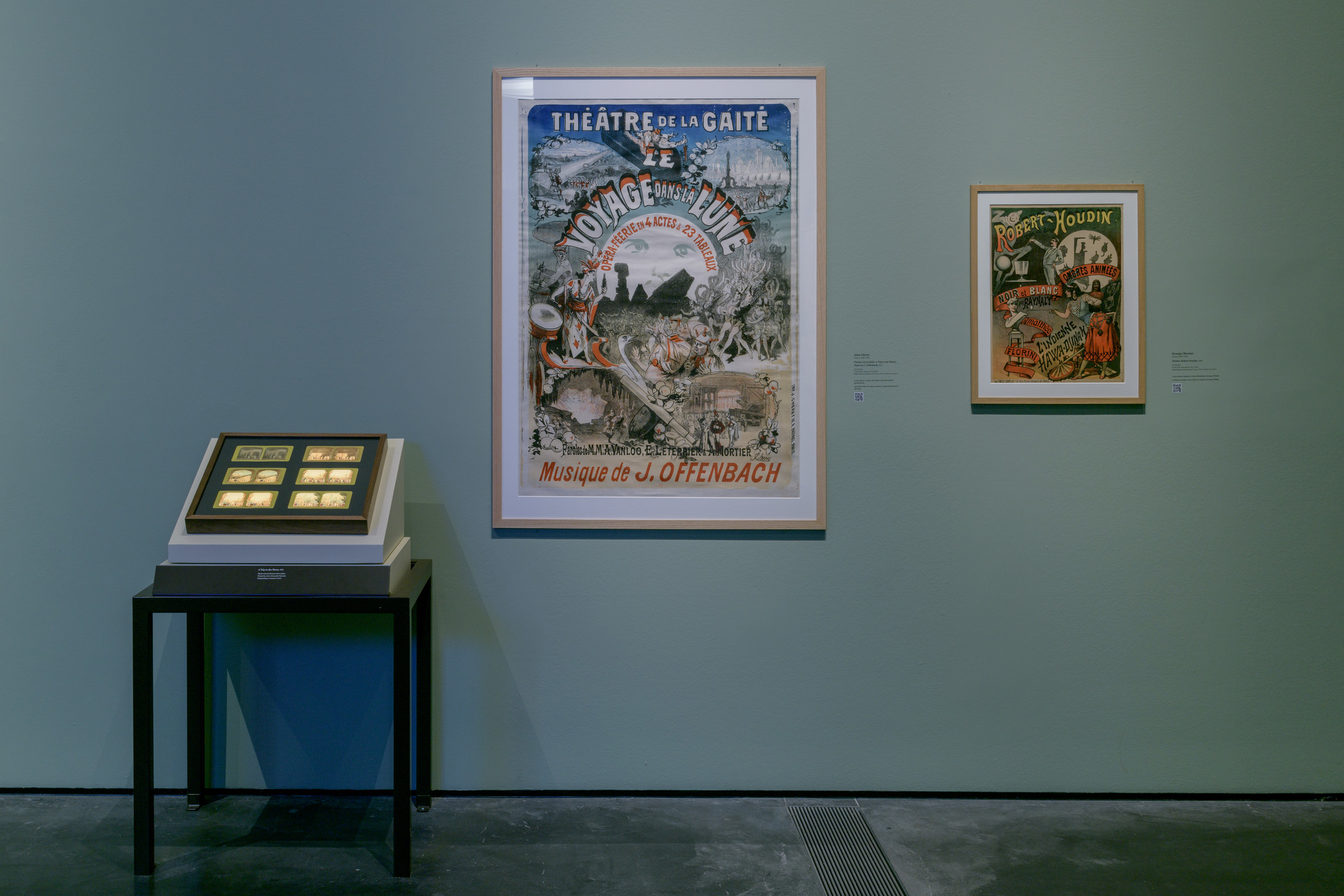 Stereoscopy and cinema have intertwined histories, as suggested in the exhibition City of Cinema: Paris 1850–1907. Alongside posters, paintings, prints, and other forms of visual culture, stereoscopic photography was avidly consumed by inhabitants of and visitors to Paris in the period leading up to the Lumière brothers’ first public presentation of their cinématographe in 1895. The magical optical effects of stereoscopic photographs, as well as their potential for narrative sequencing, paved the way for cinematic composition and storytelling. In the photo above, a set of French tissue stereographs in the case on the left recapitulates the plot of a popular stage production Le Voyage dans la Lune (1875) by composer Jacques Offenbach, advertised by the Jules Chéret poster in the center. Such images reverberate in Georges Méliès’s beloved film, Le Voyage dans la Lune (1902).

Paris was a center of stereo activity from the very beginning. Stereo photographers documented the modern city, photography studios employed men and women printing and assembling stereographs, and optical instrument-makers turned their skills to making stereo cameras and stereoscopes. Eager audiences collected stereo views of Expositions Universelles, tourist sites, humorous narratives, landscapes, sculptures, and myriad other subjects. City views, described as “instantaneous,” were especially popular because bustling pedestrian and vehicular traffic was captured in detail. This was possible because stereoscopic cameras had short focal lengths, which reduced exposure times. In the example at the top of the page, people and horses are still in mid-stride. The plunging, perspectival view down the Rue de Rivoli—a celebrated commercial boulevard—gains dramatic three-dimensionality when examined through a stereoscope. 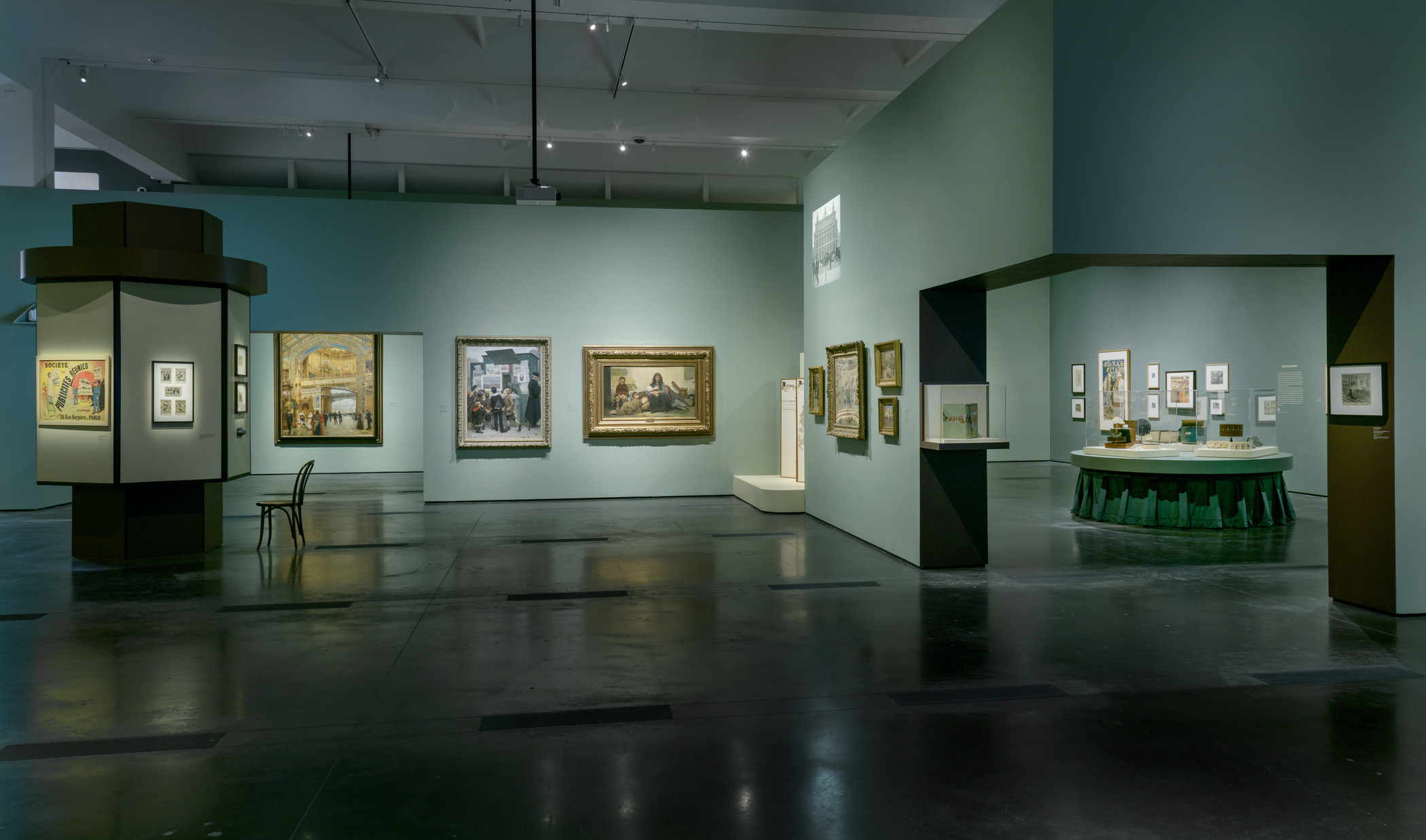 City of Cinema includes a stereoscope and several stereographs from the mid-19th century—borrowed from the Getty Museum and the Cinémathèque Française, Paris. A modern lens-based viewing apparatus (on the column in the photo above) allows museum visitors to have a seat and see a selection of digitized stereo views of Parisian boulevards in 3D. These digitized views are from the Dr. Brian May Archive, an unrivaled collection of stereo images and objects. In 2018–2019, LACMA was honored to include some digitized examples from Dr. May’s collection in the exhibition 3D: Double Vision, the catalogue for which is available online. 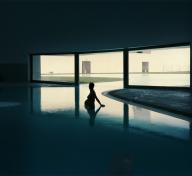