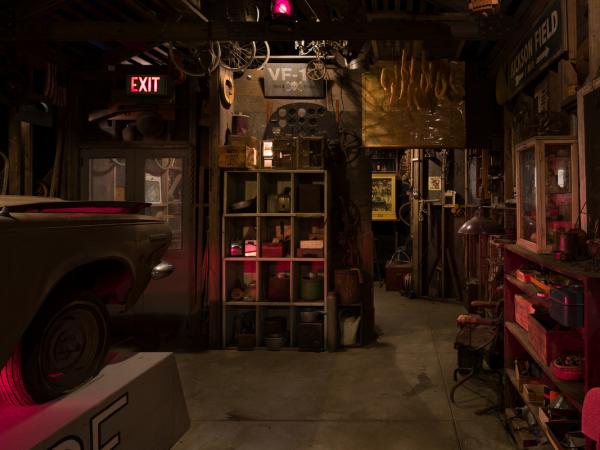 Ask any lawyer what the hardest part of law school is and they’ll tell you the harrowing tale of their first year. The fast-paced nature of learning complex concepts and then being asked to apply them immediately after can feel like the transition from swimming in a pool to treading water in the middle of the ocean. Furthermore, there lies the daunting realization that in order to be a good lawyer they must embody the humanity, precision, theory, and technique from their training. In order to succeed, they must begin to “think like a lawyer.” This phrase, command, and sometimes mantra refers to a framework through which students learn to engage in a type of critical thinking that will ultimately help them practice law. It requires that they examine their previous way of thinking for techniques and traits that will allow them to absorb new teachings and adapt. This process is similar to that of a fledgling registrar.

Since the beginning of my time as the Getty Marrow Undergraduate intern for LACMA’s Registration and Collections department, I’ve felt my perspective shifting to accommodate the duties of the position. Soon into my internship, I was introduced to an installation that taught me to “think like a registrar.” It required that I alter the way I view and engage with art so that I could accomplish a museum registrar’s tasks to the best of my ability. It is a registrar’s responsibility to ensure that the documentation for each object provides an accurate account of its life while under the museum’s care. This includes information like how the object came to be part of the museum, its condition, and all locations past and present. Collecting this information requires a set of specialized practices that draw upon the traits a museum registrar must nurture. 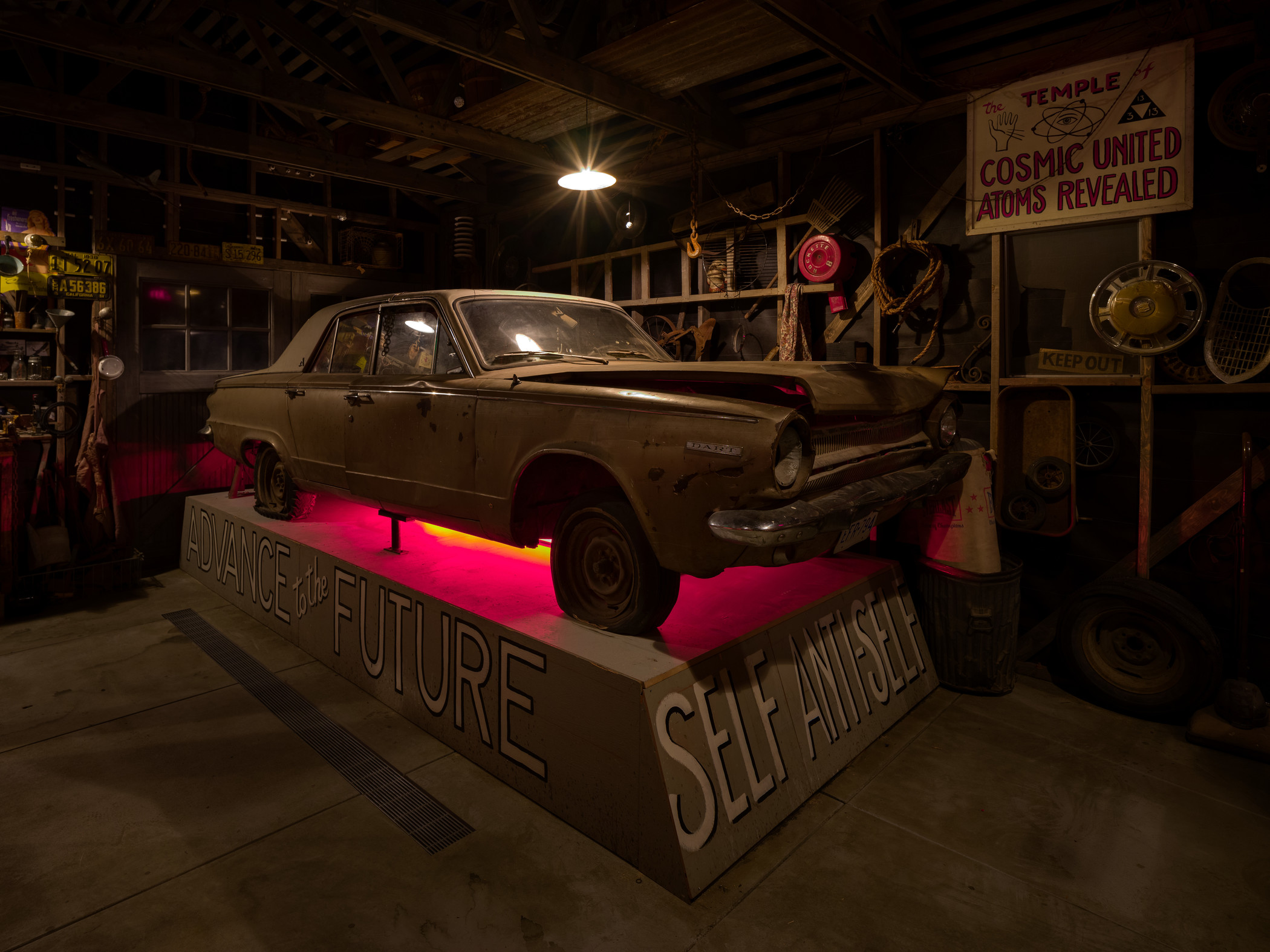 The first thing a registrar becomes aware of is their position in the network of the museum world and in the lineage of registrars. The data available to work with now is a gift from the registrars who came before, and the work done today is the foundation for the registrars who will come after. Throughout my internship, I was immensely grateful for the work that took place before my arrival. The contribution of last year’s Getty intern, Soyoon Lee, allowed me to orient myself within vast projects and provided examples from which I could learn. Picking up where she left off taught me that a crucial part of my job is to always think ahead to who will handle my work next. A registrar preserves information for posterity, and so I constantly asked myself: “if I’m not here to explain this, does it still make sense?” Even this article is a continuation of past work, as it was started last summer by Soyoon and is now being completed by me. Although we have never met, we are in conversation through our work and our words. Most significantly, we are collaborators on the tremendous assignment the department unofficially calls “The McMillen Project.”

Our task for the summer was to conduct a full inventory of Michael C. McMillen's immersive mixed-media installation Central Meridian (The Garage), described by the artist as “walk-in assemblage” composed of three distinct rooms and a hallway filled with objects that, together, create an environment evocative of a bygone era. In order to understand the magnitude of the task at hand, it is important to know the history of the installation. Central Meridian, a.k.a. “The Garage,” was created in 1981 for a LACMA exhibition curated by Stephanie Barron called The Museum as Site, intended to locate various artists’ projects across the museum campus; at the conclusion of the show, the works were for the most part destroyed or returned to the artist. This is the piece’s third iteration. The installation relies on the transformative power of objects in space to teleport the viewer to a garage from the mid-20th century. The placement of each object tells the story of who might have inhabited the space, almost as if the owner has left the garage for long enough for someone to slip in and admire their treasures under the cover of night. The installation contains more than 1,300 elements, and they are all essential to the spirit of the piece. The last inventory was conducted nearly 20 years ago, and the installation’s composition and layout have changed little since then. When it is time to deinstall and store the current iteration of Central Meridian, a detailed record of each object and its location will be essential in reinstalling the installation piece in the future. 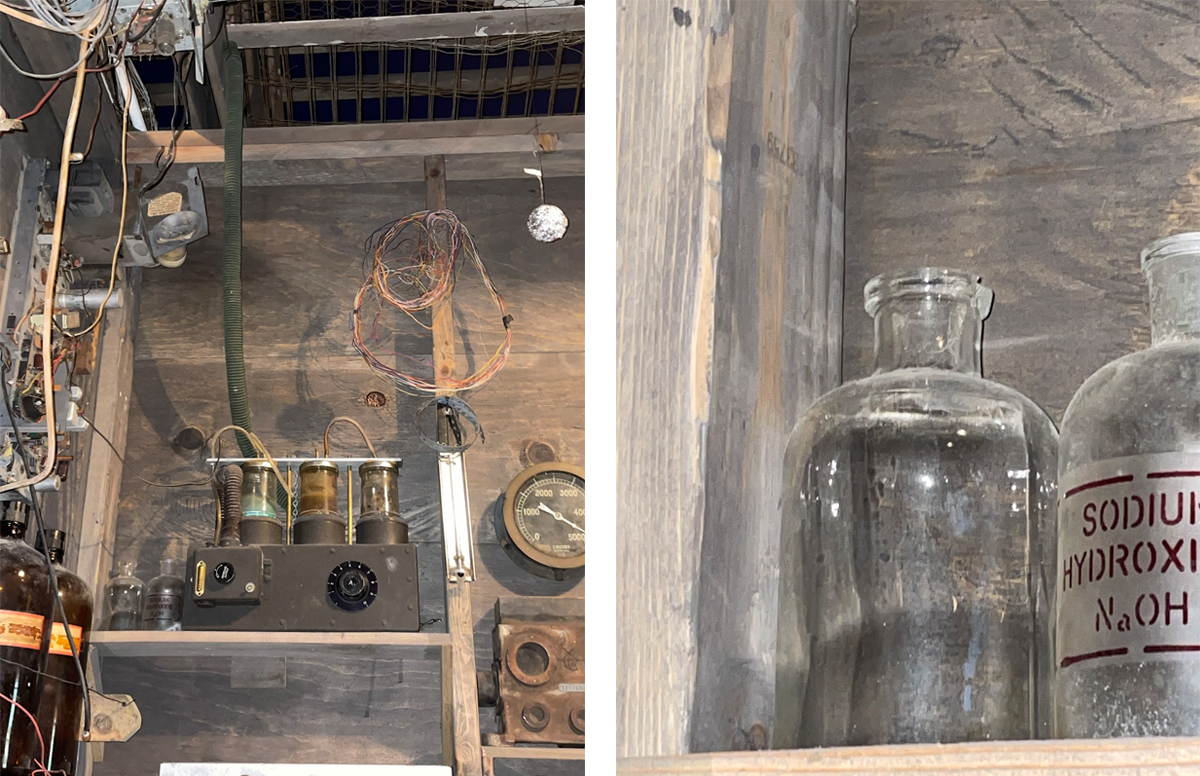 The registrar's inventory process for Central Meridian can be best described as an exercise in narrowing focus to concentrate on parts while maintaining perspective on the whole. It’s like starting with an image of the entire installation, then zooming in on one portion, perhaps a hallway or room, dividing that portion into smaller sections, like walls, dividing these sections once more, and finally zooming in on an object in the first smallest section. This is the beginning of the inventory process. A photo is taken of each object in the installation and assigned a number based on which section and subsections it is in. The numbering system follows the order of largest section to smallest, like how the previous thought exercise began with a full picture and ended with an individual object. I developed a color-coded mapping system to keep track of each section and dictate the order in which I took pictures. These pictures are used to identify objects in the current iteration as the ones in the inventory from the 2000s, split previously grouped objects, and provide a visual aid for unidentified objects. Consistency is crucial during this process, as the cohesiveness of the language determines the ease with which this inventory can be used by other registrars. Photos are a registrar’s best friend and lend themselves well to this project in particular. The evolutionary nature of Central Meridian makes missing data more of a possibility, but the ability to provide a picture for an object without a name ensures that the object will be accounted for.

A large part of the installation’s allure is how old-fashioned and uncommon some of the objects are, such as clear glass Heinz jar with five nails inside or a rusty metal sign that reads "danger 20 KV High Voltage." While this experience is mesmerizing for a viewer, it provides a unique challenge to the registrar. Whereas an easily recognizable object, such as a wooden chair, can be located in the inventory spreadsheet by conducting a search for the phrase “wooden chair,” other items cannot and must be identified by comparing pictures from the current inventory to pictures from the previous one until a match is made. Sometimes, the object remains unmatched. While it can be disappointing to label an object as “to be identified,” that feeling is easily remedied by the excitement of being the first person to provide a description of the object. This is not an easy project by any means, but it is most certainly rewarding. 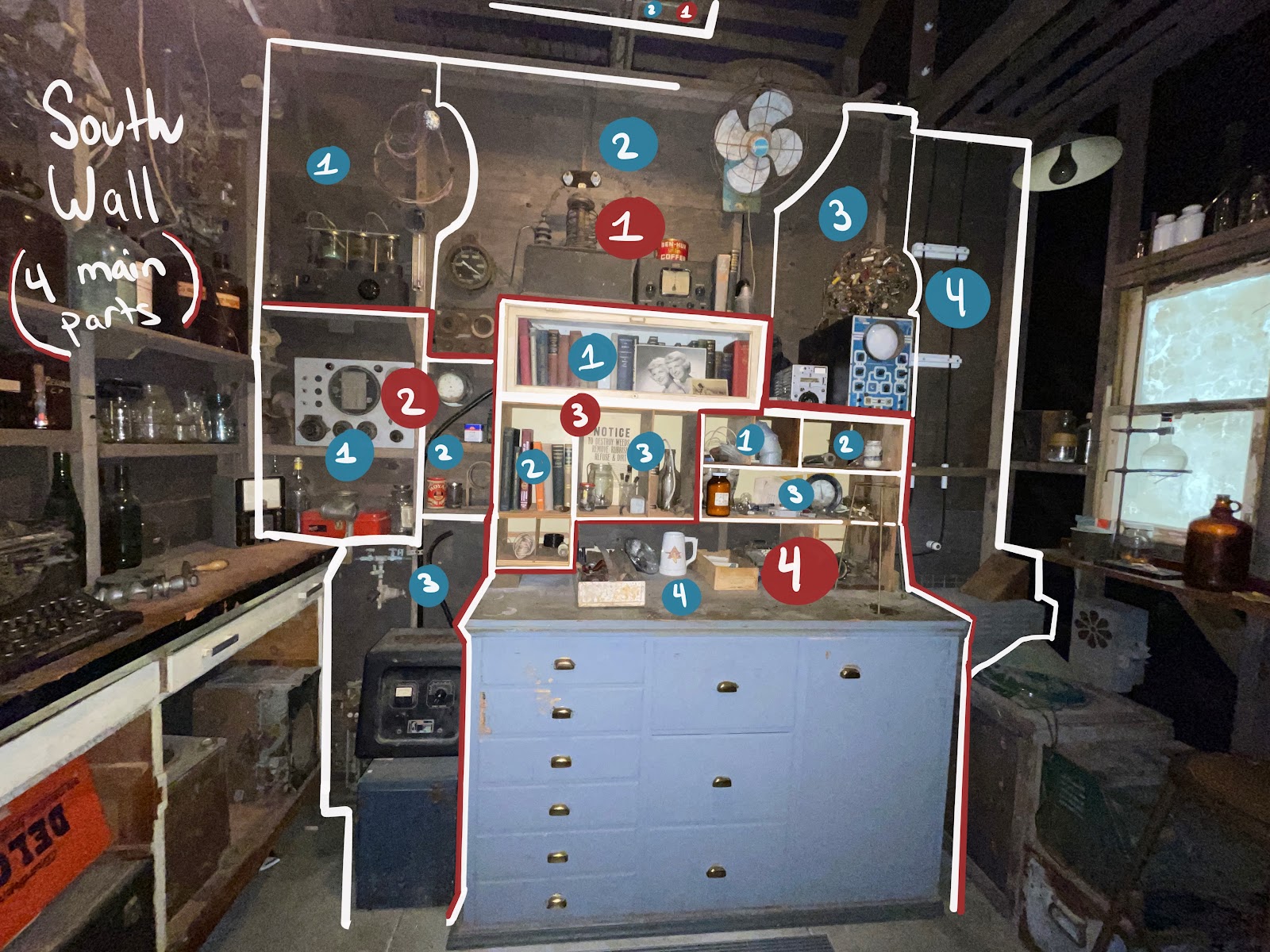 Over time, I built a relationship with Central Meridian. It is a relationship built on respect: respect for the time that has been devoted to its creation and maintenance, and respect for each object as a component worthy of documentation. I always greeted the space as I would another one of my collaborators. We became familiar with one another. I knew where each object in “the lab” lived and if it had been moved by one of LACMA’s conservators. The site’s composition may be static, but each object has a story and in that way is very much alive. Maintaining this relationship allowed me to work with the installation instead of against it, and kept me motivated when the project became difficult. Conducting this inventory was not a burden, but a privilege. If poring over countless jars in search of the one with a particular dust pattern and worn label meant that another person would one day be able to experience the awe I felt walking through the installation, then it was worth every second. 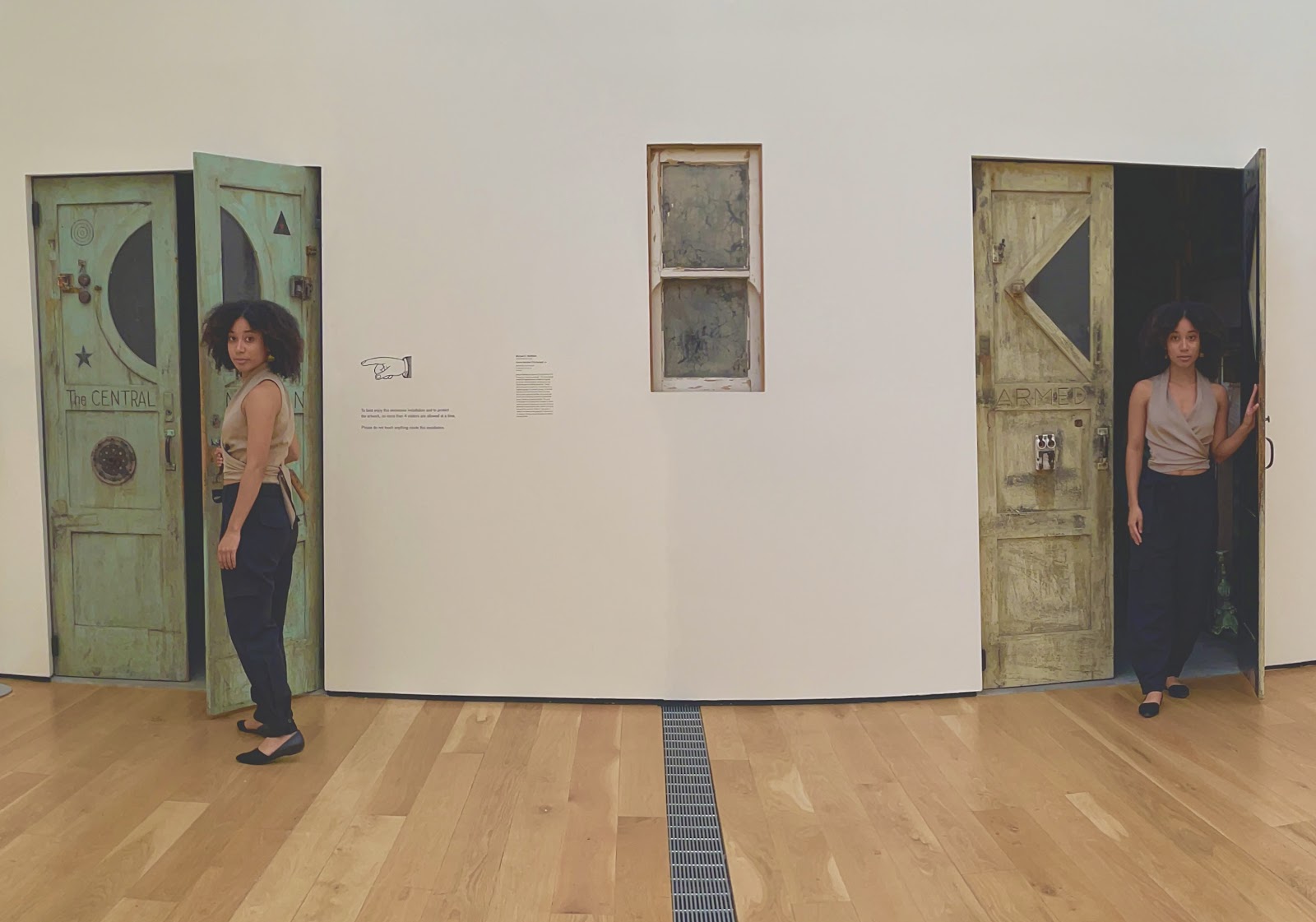 I will never look at museums the same way after my summer with Central Meridian. Where I once saw their objects as single things, I now see them as plural. A painting is its canvas, paint, glaze, and hanging hardware. A multi-part installation is everything from its largest component to its tiniest screw. There is beauty in the knowledge that each component has a history of people who cared for it. Art is both the parts and the whole. Behind each object is an interconnected web of components, and museum work is much the same. It takes an entire team to care for Central Meridian, and each department has a role to play in its success. Each member of the team is as crucial to the installation as its jars, nails, and wires. My role in the McMillen Project demystified the inner workings of a museum from the perspective of one incredible installation. Although I know more about Central Meridian than I ever did before, my new perspective doesn’t detract from its majesty. The inventory is not a list of components to wrangle and keep on a leash, but a bookmark placed to provide the reader with peace of mind and the knowledge that when it is time to return, they will know exactly where to begin again. 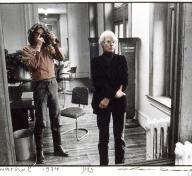