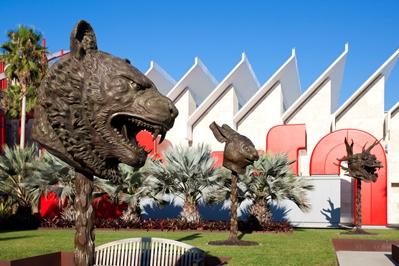 Circling Back with Ai Weiwei

As I take the elevator up from the parking garage every morning to go to work, I have enjoyed being greeted by twelve large animal heads for the last six months. Ai Weiwei’s Circle of Animals/Zodiac Heads will be leaving LACMA at the end of this week on February 12, but the sculptures’ connections to the museum’s collections will live on. As a decorative arts and design curator working in a department with objects dating to the fifteenth century, I am always looking for the present in past and vice versa. Believe it or not, Ai Weiwei’s Zodiac project can beam you back to the eighteenth century in a single bound. 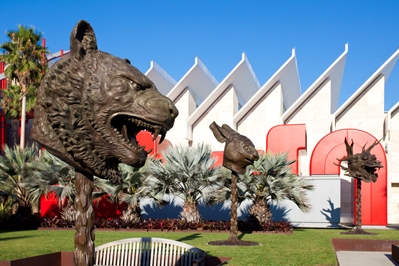 The eighteenth century was one of prolific exchange between China and the European world, which resulted in incredibly creative trans-hemispheric interpretations of design aesthetics. By midcentury there were a considerable number of Jesuits present in the Chinese imperial court, where Eastern and Western concepts of science, art, mathematics, horology, astronomy, and religion mingled. In 1747 the Qianlong emperor decided to build a complex of European palaces on twenty acres in the northwestern section of the Yuan Ming Yuan, the Old Summer Palace in Beijing.  Based on the designs of grand European palaces such as Versailles, Jesuits Giuseppe Castiglione and Michel Benoist and Manchurian artists and architects built what would become a series of forty structures, including the European Pavilions, formal gardens, and three fountains. Ai’s Zodiac Heads recall the water clock fountain built in front of the Hall of Calm Seas, which featured twelve animal figures based on the Chinese zodiac that spurted water from their mouths to tell the time. 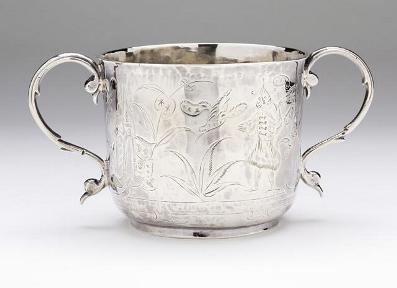 While the Chinese showed interest in European design, Westerners in China were recording their experiences through sketches and drawings that were sent back to Europe and published, thus providing a plethora of Asian inspirations for the decorative arts, designs, architecture, and landscaping. Providing the West with its first source of engravings based on Chinese models, Johannes Nieuhof’s An Embassy from the East India Company of the United Provinces to the Emperor of China, a collection of 150 illustrations from the travels of a Dutch embassy to Beijing in 1656, was first translated into English and published by John Ogilby in Britain in 1669.  Capturing an extensive view of the Chinese empire’s topography, principle cities, inhabitants, architecture, flora and fauna, as well as a map indicating the route taken by the embassy from Java to Beijing, Nieuhof’s engravings presented a defining vision of China for European eyes and became a rich source of visual imagery for myriad media, including this English silver cup, featuring chased scenes of Chinese figures and exotic birds. 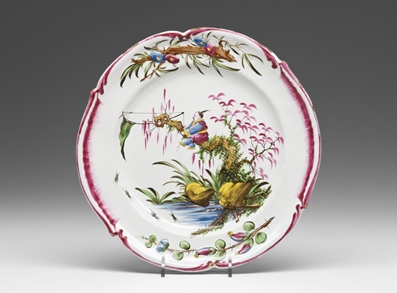 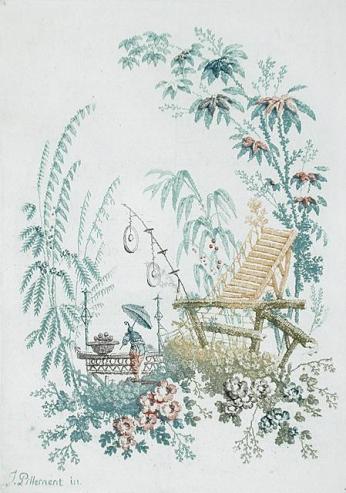 The European adaption of Asian aesthetics is known as chinoiserie, a term derived from the French word chinois (Chinese) that denotes a type of European art influenced by Asian styles. Often the Western version of Asia was quite imaginative, based more on fantasy than reality. As the mania for imported Asian objects grew in seventeenth- and eighteenth-century Europe, Westerners began to copy Asian motifs, forms and even methods of manufacture, especially the production of porcelain. Faience is the French version of tin-glazed earthenware, or ceramics covered with an opaque white glaze. Initially faience was an attempt to mimic true hard-paste porcelain imported into Europe from Asia, but these wares ultimately became distinctive and sought-after ceramics in their own right. This French faience plate is decorated with a scene after the designs of Jean-Baptiste Pillment, whose first Chinese fantasies, entitled A New Book of Chinese Design Calculated to Improve the Present Taste and A New Book of Chinese Ornaments,were published in London in 1754 and 1755.  Subsequent publications by Pillement, as well British adaptations of his work such as Robert Sayer’s The Ladies Amusement, which contained approximately 1,500 drawings, the majority of which were by Pillement, further supplied chinoiserie motifs to craftsmen. 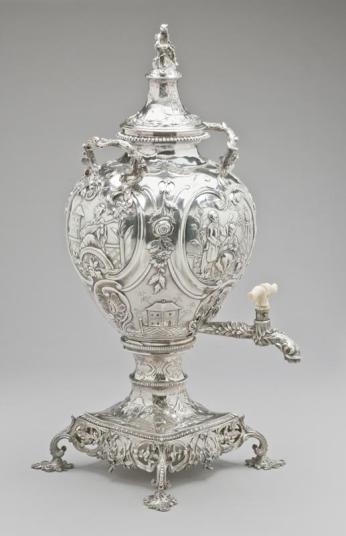 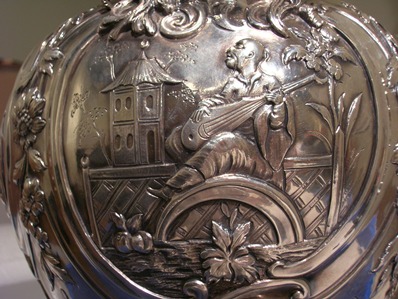 In the hands of British silversmiths working in the second half of the eighteenth century, chinoiserie designs began to take over the design scheme of works. John Swift was known for his coffeepots, tea kettles, and hot water urns with scenes of relaxed Pillementesque chinoiserie figures enjoying tea, at leisure in the garden, or playing musical instruments. His examples of British silver illustrate the mid-century trend for chinoiserie scenes to burst forth from the containment of reserves or cartouches and cover the entire body of the vessels. On this tea urn by Swift a Chinese figure rests casually on a latticed fence, strumming a stringed instrument by a pagoda-shaped building. 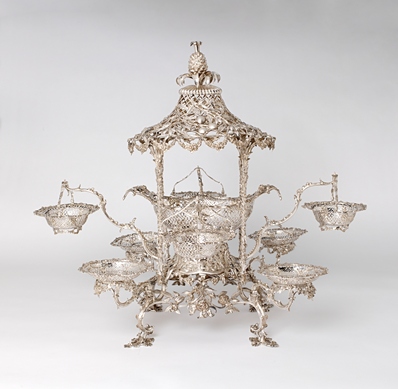 It was in the 1760s that a fully three-dimensional realization of chinoiserie flourished in British silver and English epergnes, one of the most complex pieces of silver commissioned from English silversmiths, reached the highest level of fanciful articulation and greatest degree of inventiveness, expressed in a manner that engaged Western participants in a complete sensorial experience of an envisioned Orient. Leading the way was a series of pagoda-topped epergnes by Thomas Pitts; these multi-purpose pieces were meant to facilitate the new French dining style of helping oneself.  At least twelve of these epergnes were made beginning in 1761 with identical rococo scrollwork feet and frames. The addition of the pagoda canopy to epergnes lent a new dramatic dimension to their composition. Should the exotic nature of the piece possibly be overlooked, the Asian-inspired creation is topped with a pineapple, the epitome of imported fruit from foreign ports. I will miss being surrounded by Ai Weiwei’s Circle of Animals/Zodiac Heads when I come and go from the museum, but as twelve sculptures set sail from the West Coast they leave another layer of meaning on centuries-old works of art that will stay right here at LACMA. Elizabeth A. Williams, the Marilyn B. and Calvin B. Gross Assistant Curator, Decorative Arts and Design