Demonstrating the playful nature present in her work, Huguette Caland’s Huguette with Paul and Mustafa (above) explores themes of narrative expression and minimal simplicity as well as a tendency toward unbridled obsession, all elements that remain integral to both her figural and non-figural work. Emblematic of the most transitional period of her practice, Huguette with Paul and Mustafa presents an autobiographical narrative portrait of the artist’s departure from her native Lebanon, to pursue a career as a painter abroad in Paris. Resolutely removing herself from the political world she was born into as the daughter of Lebanon’s first post-independence president Bechara El Khoury following his death, the resilience and risqué nature of Caland’s eroticized and emotionally potent portraits of love, exile, family, and war are especially bold given the weight of her father’s political standing. In the simple lines and ecstatic bursts of rich pastels throughout this minimalist composition, Huguette with Paul and Mustafa’s application of vivid jade, bluish gray and cream recall the landscape of the Mediterranean Caland was soon to abandon. Part of Prospect.3 New Orleans, Huguette with Paul and Mustafa is the first work by the artist to enter LACMA’s collection. 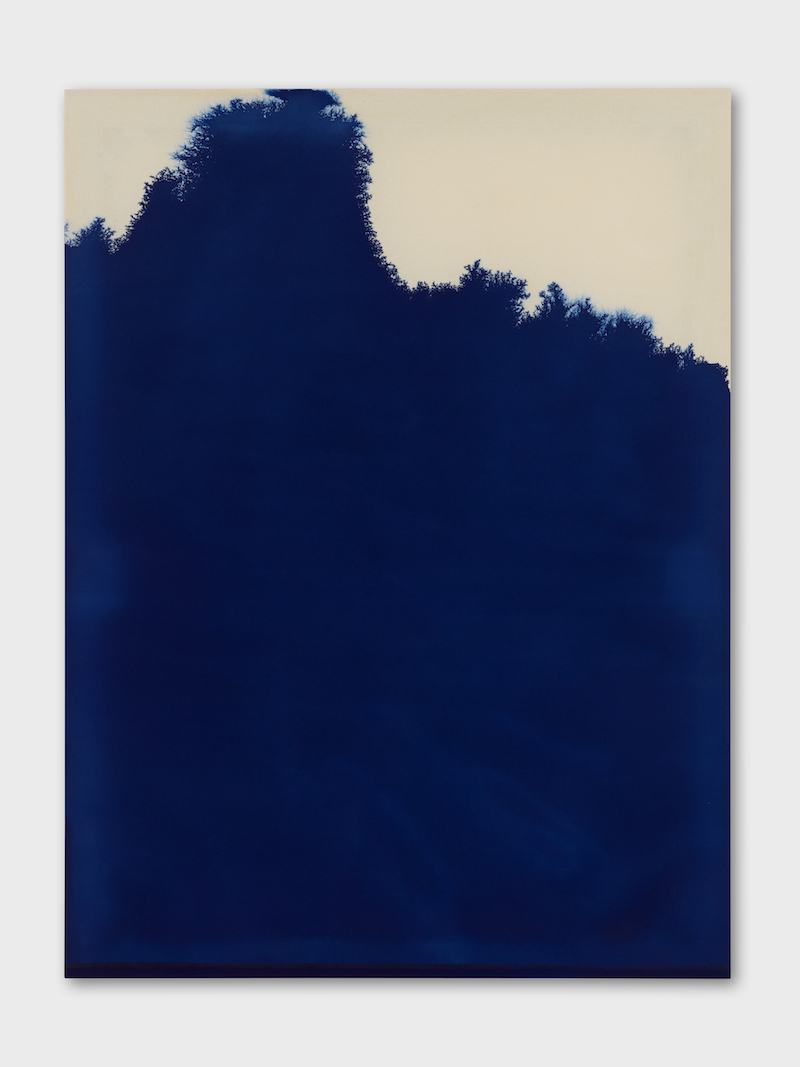 Latifa Echakhch, The end seems to be in sight, but feel a bit cramped, three steps ahead, turn right, close the eyes, 2014, Los Angeles County Museum of Art, purchased with funds provided through Contemporary Friends, 2014

Switzerland-based artist Latifa Echakhch addresses contemporary globalized culture through elegant gestures and formal restraint. Born in Morocco and raised in France, Echakhch’s work contemplates the immigrant experience and notions of nationality. With a relatively simple gesture, Echakhch manages to encapsulate the vocabularies of abstract painting, minimalist sculpture, the readymade and site-specific installation while never fully adhering to any of these categories.

The end seems to be in sight, but feel a bit cramped. three steps ahead, turn right, close the eyes—with its nod to Yves Klein’s monochromes—distinguishes itself in the canon of action painting. Echakhch applies ink that is absorbed upwards, against gravity, rather than engaging in the process of pouring paint by applying a retardant to her canvas, the ink becomes detained from absorbing the entirety of the canvas. Echakhch’s ink-saturated canvas recalls abstraction’s enduring alliance with the avant-garde. From Bauhaus’s denouncement of the decorative to Constructivism’s renunciation of the idea of the autonomous object, abstraction has maintained a long-enduring connection with notions of progress, political change, and social reform. Through these actions Echakhch proposes new meanings for familiar objects or brings attention to the strangeness of a thing we thought we knew. The material—paradoxically both muted and stubbornly present—is like a leader stripped of power, acknowledged for a once-crucial role but now relegated to a more ornamental position. Divorced from their utility, Echakhch’s works consider art’s capacity to function as a catalyst for discourse, while questioning whether such efforts can have any efficacy in the evolving world. By removing the expectation that an object or material serves for a particular function, Echakhch’s optimistic work allows for new interpretations. This would be her first work to enter LACMA’s collection. 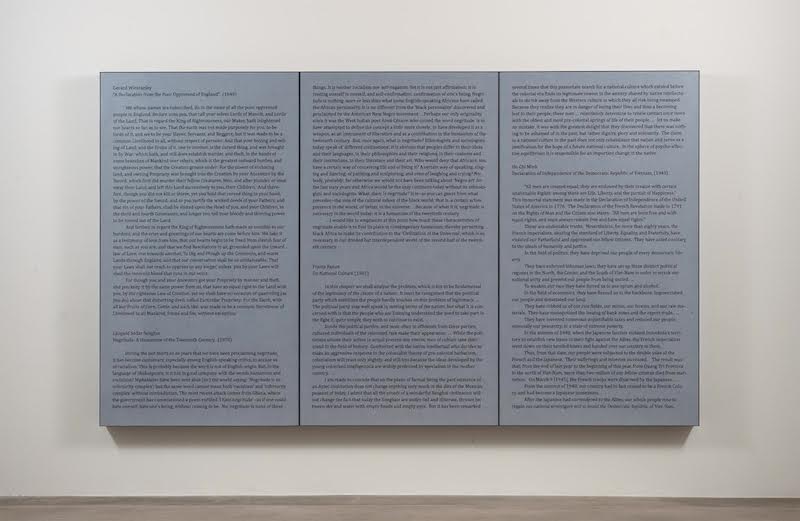 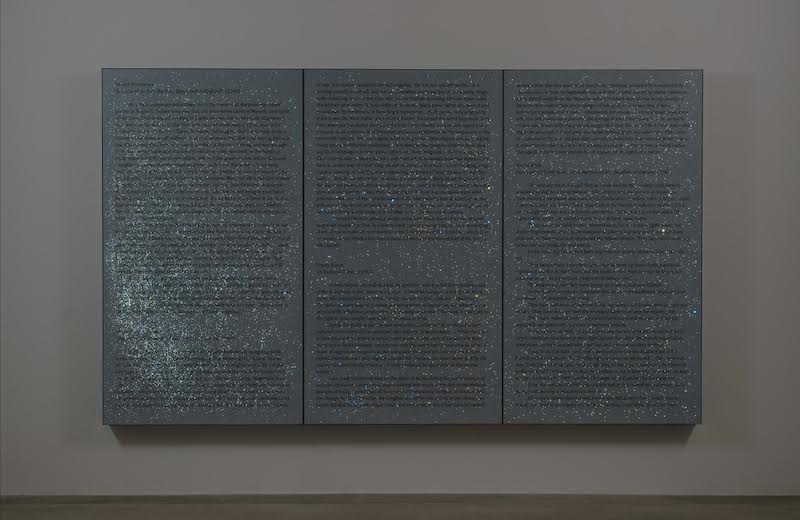 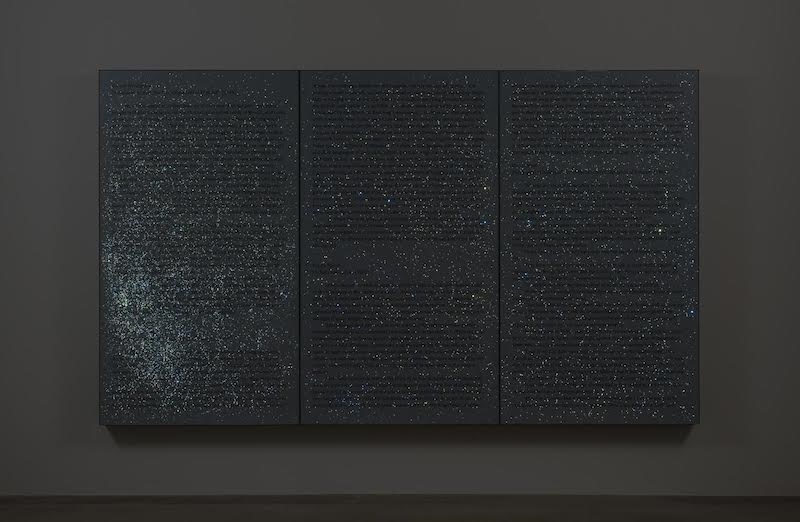 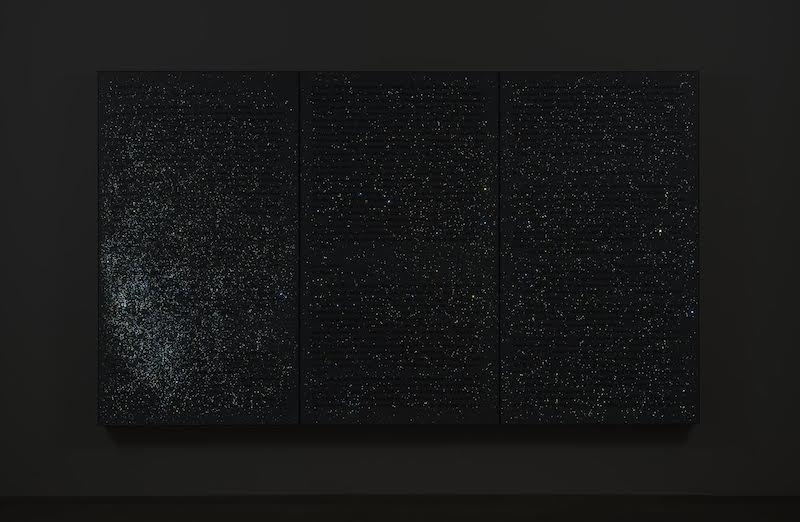 For over 40 years, Charles Gaines has produced works that cohesively express concept, craft, political, and social commentary together in a singular work with the unique ability to please the eye aesthetically and the mind conceptually. Since 1995, Gaines has investigated the relationship between language and representation. Though his frequent use of text evokes a desire to read the work literally, and the significant role of language in contemporary art at the center of all this endeavors, Gaines’s austere and confounding works cannot be solely read as such.

Gaines’s Skybox 1 consists of a light box measuring approximately 7 by 12 feet. The light box illuminates blown up images of political discourses on oppression, colonialism and liberation, democracy, and freedom. The texts are by the 17th-century religious reformer Gerard Winstanley, and 20th-century philosophers and political leaders Léopold Sédar Senghor, Frantz Fanon, and Ho Chi Minh. At regular intervals, the light box dims so that the texts disappear, revealing thousands of points of light that suggest a star-filled night sky. 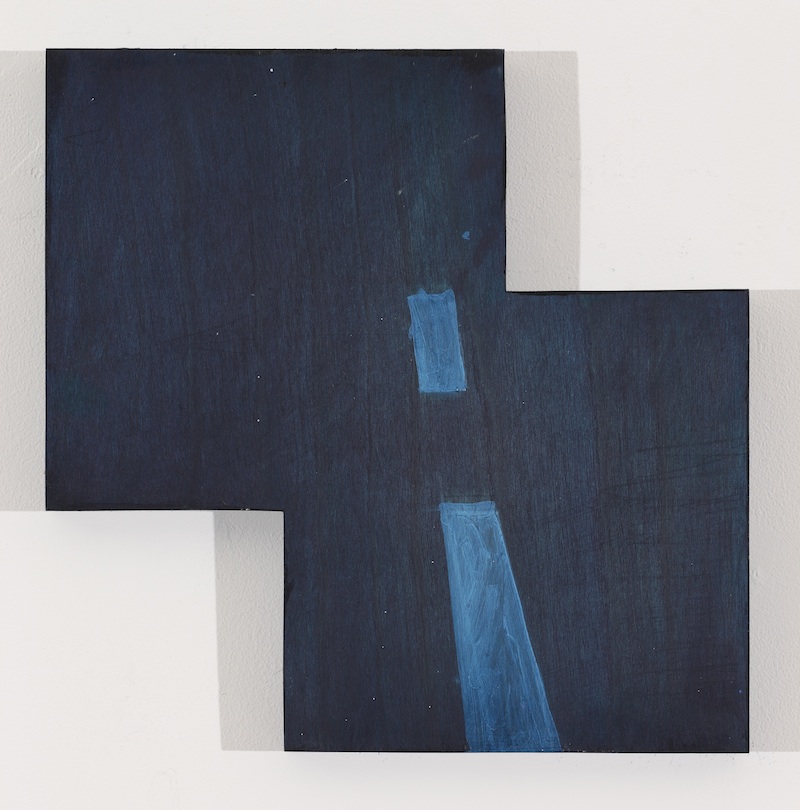 On a wooden board in a blockish shape resembling a Tetris piece, Mary Heilmann’s Yuma Arizona presents a dark highway imbued with the promise of the proverbial road trip. Taking inspiration from Kazimir Malevich, Heilmann reworks geometric forms in a puzzle-making way. True to her quintessential playful sophistication, the artist renders pattern and landscape, juxtaposing the two- and three-dimensional in a single frame. Yuma Arizona’s dashed blue lines of highway asphalt take part in these spatial compositions. Interrupting the iconic simplicity of the road with a dynamic vision, Yuma Arizona achieves something that Heilmann never fails to produce: a work that is deceptively simple in design and absorbingly complex in texture and color. Over the last four decades, Mary Heilmann has created formally adventurous paintings marked by poetic titles referencing moments and places of her past, each work acting as an autobiographical marker.

A consummate colorist, Heilmann’s semiabstract painting are an ongoing memoir invoked by the very narrative of her life, a primary subject of interest in her practice for the past 20 years of her over 40-year career. In an almost wholly nonrepresentational practice, Heilmann explores the expressive possibilities of color by investigating the associations we bring to specific hues and the particular memories and emotions a wide range of colors can evoke. Throughout her career, Heilmann has resisted conforming to pre-established standards of Minimalist versus Expressionist painting, and notably began her artistic endeavors with post-minimal ceramics in the later 1960s. She finds inspiration in a wide range of muses; nature (the ocean a recurring inspiration in her works), auto body lacquer, cartoons, and pottery glaze. This would be her first painting to enter LACMA’s collection. 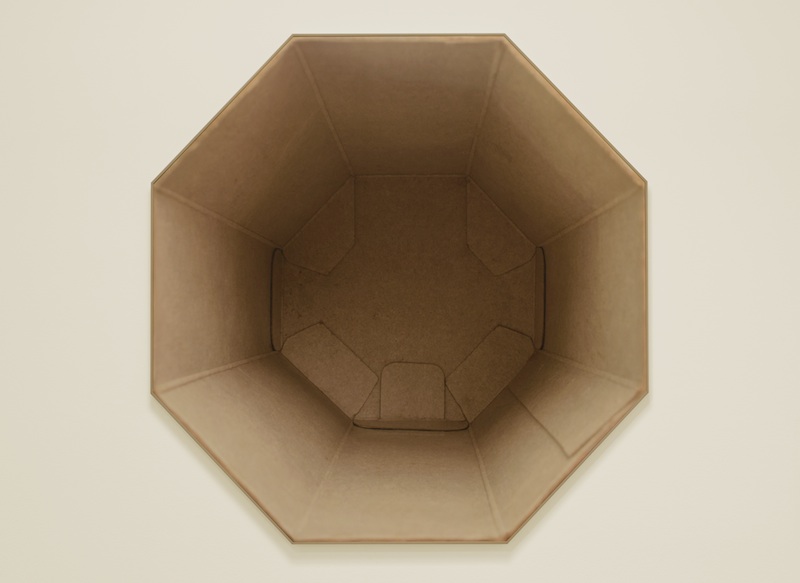 Viewed from a distance, the photographic relief 2001 by São Paulo–based artist Lucia Koch induces a dizzying effect that is indeterminate and unstable. In referencing a continued interest in “concrete material,” a concept within the realm of modern mathematics, the artist reveals the challenges within the phenomenon of perception, rather than imposing the beauty of mathematical structures into her practice. Addressing a broader political concern, Koch’s disorienting and disrupting experiential practice re-examines the livability of generic, mass-produced structures. This is Koch’s first work to enter a museum collection in the U.S.

Staging architectural interventions for over a decade, Lucia Koch’s photographs, videos, and sculptural installations conjure extensions of space rather than manipulations of it. Her practice is formed largely through speculative thought, ultimately realizing perceptual structures with both compelling and concrete dimensions. Working in a wide range of translucent materials, Koch creates a diverse play on perception and approaches to abstraction. In the 1990s she began a series of interventions in domestic spaces that would later extend to galleries and museums with site-specific projects conceived around situations she encountered. Most recently she has approached stage photography, playing with geometric perforations and light by constructing small interior environments and proceeding to blow them up into large-scale photographs. 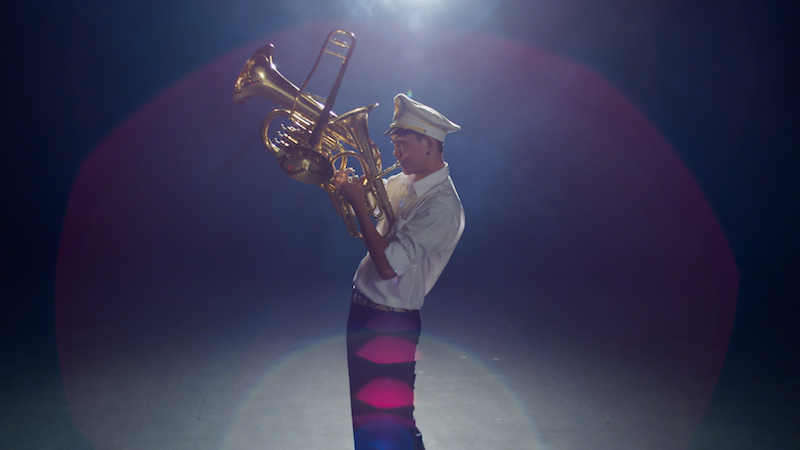 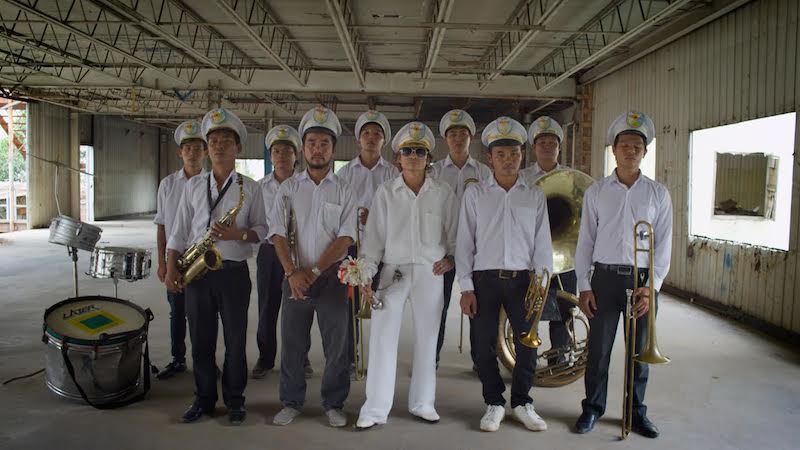 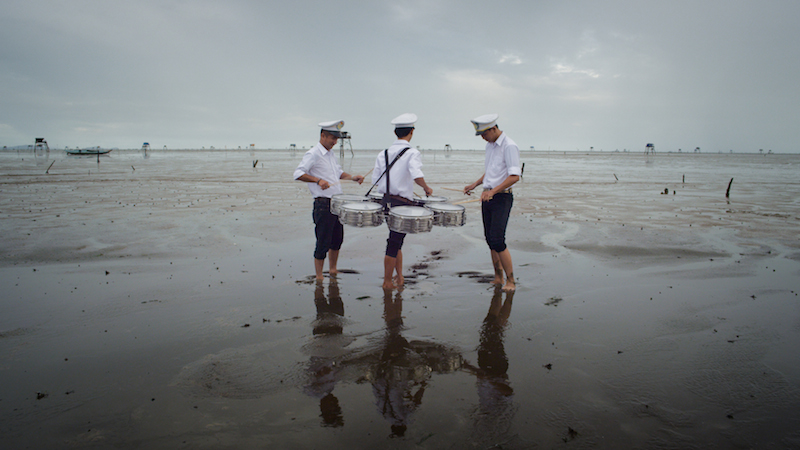 Since 2006 the members of The Propeller Group, headquartered here in Los Angeles and Ho Chi Minh City, Vietnam, have produced several ambitious projects that could not be realized as individual artists, but are logistically and spiritually products of a collective. Drawing on their backgrounds in visual art, film, and video, The Propeller Group has sought to use media in many forms to participate in conversations about society, politics, and economics.

For the Prospect.3 New Orleans art biennial, the group created a new film, The Living Need Light, The Dead Need Music. Its title, borrowed from a Vietnamese Buddhist proverb, focuses on the ceremony of the funeral wake in Vietnam, where spiritual mediums, professional criers, and musicians lead multiple-day mourning ceremonies into euphoric public events. The work “encapsulates the elusive butterfly effect—the theory of ‘non-locality,’ whereby two distinct phenomena affect each other across a vast expanse of space and time. They explore the celebratory and unique funeral ceremonies of Saigon and New Orleans: two cities, two cultures mirroring each other from worlds apart.” Among the most celebrated works included in Prospect.3 New Orleans, this would be The Propeller Group’s first piece to enter the LACMA collection.

Robin Rhode’s grid of eight photographs that compose Bird on Wires traces the flight pattern of a bird as it traverses from perch to perch along a barbed-wired fence. Here Rhode’s practice directly engages with the relationship between permanence and temporality, as his performance-based works are reflections of the unexpected flux of the street. The action calls to mind the early movement experiments carried out in the late 1880s by the French scientist Ètienne-Jules Marey. Evoking individual expression with broader socioeconomic concerns, Rhode’s ephemeral narratives are rich in historical and contemporary reference. This would be his first work to enter the museum’s collection.

Delving into a variety of visual languages, the South African–born, Berlin-based multidisciplinary artist enlists photography, performance, drawing, and sculpture to enliven arrestingly beautiful narratives. Rhode’s acute personal perspective is a testament to his formative years as an artist in experimental post-apartheid South Africa, where new forms of creative expression favored the spirit of the individual rather than political or social motivations. Frequently employing ephemeral mediums such as soap, charcoal, chalk, and paint, Rhode’s interest in storytelling engages him in performance-based transformations of public space. 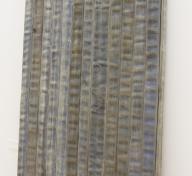 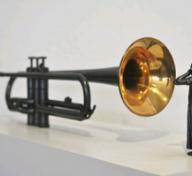 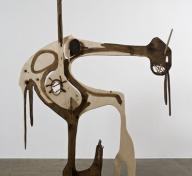