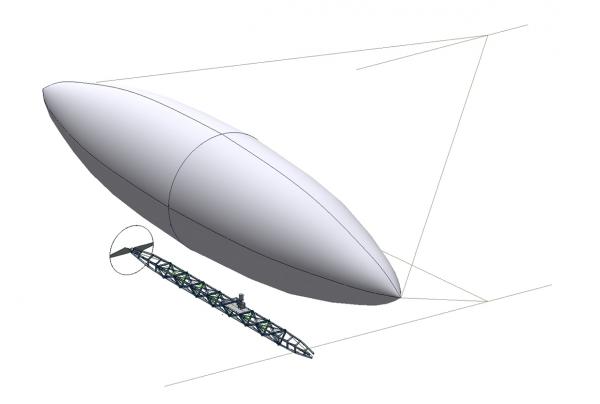 Beginning on May 18, 2015, and running for four weeks, LACMA presents Chris Burden: Ode to Santos Dumont, the first museum presentation of Burden’s recently completed monumental performance sculpture. Plans to exhibit the sculpture began last month after LACMA CEO and Wallis Annenberg Director Michael Govan saw a test run with Burden's machinist-collaborator, John Biggs, in a rented hangar at Camarillo Airport. Sadly, although Burden completed his plans for the exhibition at LACMA, he passed away on May 10, 2015, before the installation opens to the public.

Ode to Santos Dumont is a kinetic airship sculpture inspired by Brazilian-born pioneer aviator Alberto Santos-Dumont, widely considered the father of aviation in France. Flying his petrol engine–powered, lighter-than-air dirigible around the Eiffel Tower in 1901 to international notoriety, Santos-Dumont, perhaps more than anyone else, proved the viability of human air travel. Burden's powerful sculpture Ode to Santos Dumont, completed this year after a decade of research and work, is a fitting tribute to Santos-Dumont's ingenuity and optimism in the face of naysayers. The work is also an homage to the persistence of experimentation and failure, which always attends innovation and the development of new points of view. 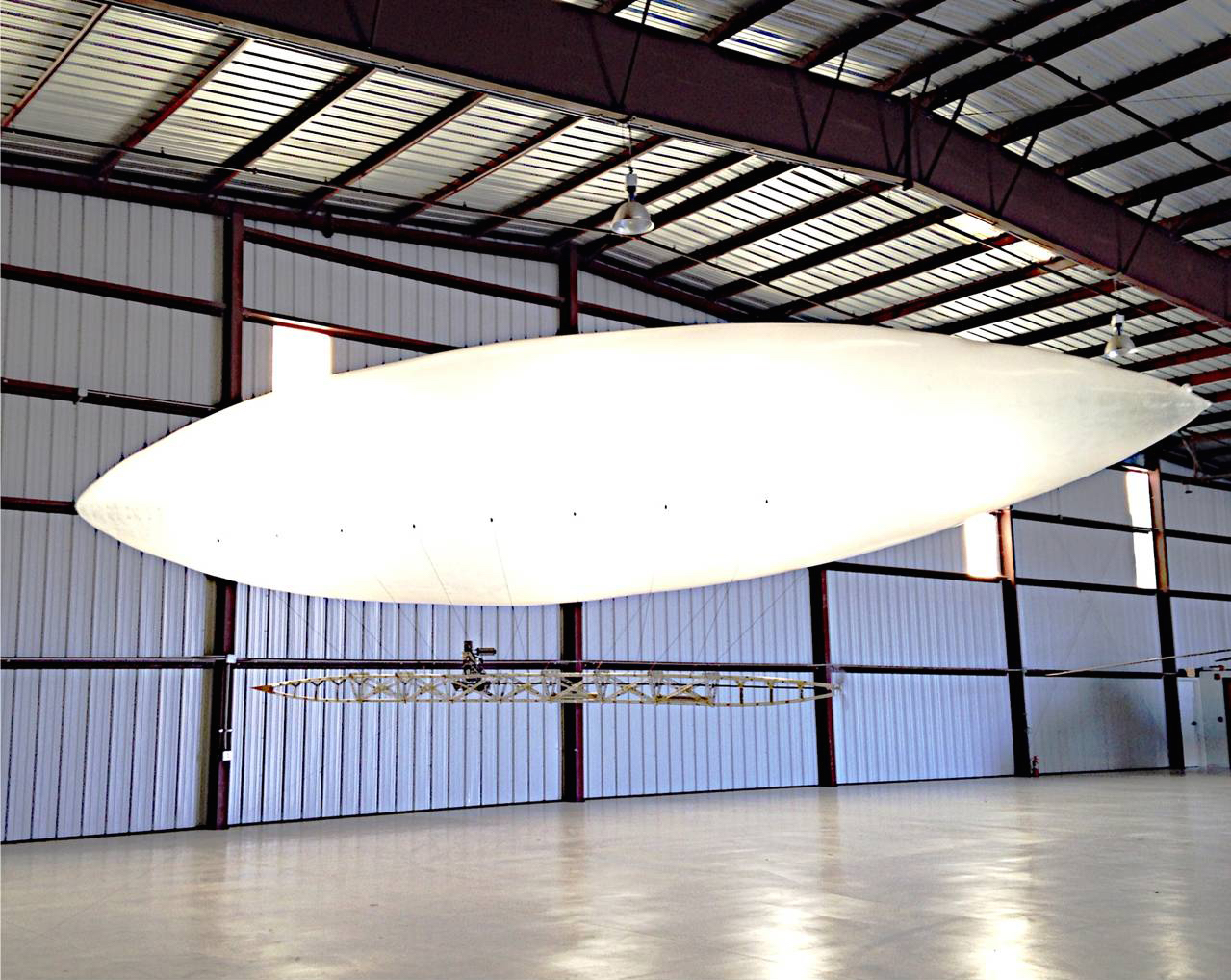 Burden himself, over his nearly 50-year career, was a relentless innovator of form and ideas. A pioneer of performance art as well as a maker of iconic public sculpture, Burden, like Santos-Dumont, pursued artistic projects that have continuously challenged his physical and mental endurance as well as embraced technical complexity.

Conveyances of all kinds—cars, boats, trains, planes, and even steamrollers—have figured prominently in Burden's artwork, perhaps because, since the beginning of his career, he was always interested in motion and action as an element of sculpture. Zipping through and around a fantasy composite city are 1,100 fast-moving toy cars and 13 model trains that make up his 2011 Metropolis II at LACMA. His massive 1996 Flying Steamroller lumbers slowly on a fulcrum in a circular geometry not dissimilar to his Ode to Santos Dumont. Weight is also a common concern of many of Burden's works. The cars of Metropolis II accelerate as the force of gravity plays out on plastic highways. The steamroller is balanced by a counterweight to achieve enough buoyancy to "fly."

"Few artists can claim a body of work as rich, varied, and influential as Chris Burden—from his early, definitive and provocative performances to his large-scale installations and sculptures," said Michael Govan. "Personally, it has been a privilege and pleasure to work with Chris on the installation of two monumental works at the Los Angeles County Museum of Art, Urban Light and Metropolis II, two artworks that have become destinations for visitors of all backgrounds.

"Chris has left his mark not only on the art world but also on Los Angeles, his home since the late 1960s, thanks to Urban Light. Installed at LACMA's entrance and made from 202 historic LA street lamps, it stands as a testament to the lasting power of Chris Burden's talent, skill, and imagination."

Ode to Santos Dumont is a highly balanced and refined mechanism that achieves indoor flight in 15-minute intervals throughout the day. It is tethered from the inboard side with nearly invisible threads to central hard points in the ceiling and the ground. The balloon is filled with helium to neutral buoyancy, and the motor is just powerful enough to push the balloon in a 60-foot circle. If the airship were to deviate from its 60-foot circle, the geometry of the tethers would force the balloon to turn in a smaller tighter circle, which would cause the motor to work harder. As a result, the airship and its motor always seek the 60-foot circle, which is the path of least resistance.

Burden's homage to Santos-Dumont's airship is also about weight and gravity. The fundamental scientific problem of early attempts at navigable flight was that of lifting into the air a pilot and a power source (an engine), along with mechanisms of flight control (rudder, ballast, and guide rope in Santos-Dumont's ship). Balloon flight was common at the turn of the century, but human-navigable air travel was generally not considered a possibility. Balloons were entirely subject to wind direction and could not be piloted on a specific course. An engine was needed to power a "screw"—a propeller—that would move an airship and pilot's basket built into a skeletal fuselage with a rudder, much like a propeller moves a boat through water. Early power sources, such as electric motors that were preferred for early automobiles, were too heavy. An "explosion engine"—a petroleum-powered internal combustion engine seen in most automobiles today—proved to have a high-enough power-to-weight ratio to be practical for air travel. Burden's airship is powered by a small replica of an early engine—a quarter-scale version of a 1903 De Dion gasoline motor handcrafted by machinist and inventor John Biggs—like those used by Santos-Dumont.

The delicate balance of weight and power felt in Burden's lighter-than-air moving sculpture gives insight into the mechanisms of Santos-Dumont's beautiful innovation as well as the joy of flight. The work also lends a palpable and emotional expression of the density of air, gravity, and energy required for locomotion in our everyday earthly environment.

Ode to Santos Dumont temporarily joins two other large-scale sculptures by Chris Burden at LACMA. Urban Light (2008), the monumental outdoor artwork comprising 202 restored cast-iron antique street lamps, is situated on Wilshire Boulevard. The work was made possible by the Gordon Family Foundation’s gift to Transformation: The LACMA Campaign and has quickly become a Los Angeles icon. Metropolis II is a kinetic sculpture modeled after a fast-paced, frenetic modern city in which miniature cars speed through the city at 240 scale miles per hour, a long-term loan from the Nicolas Berggruen Charitable Foundation. For the latter, click here for viewing times.

Ode to Santos Dumont performs at 15-minute intervals several times a day and is included in the price of general admission. As with Metropolis II, visitors may access the exhibition space between performances.

Performance times are as follows (no reservation required):

Additional performances will also take place on June 9 as part of LACMA’s monthly offering of free general admission on the second Tuesday of every month.

Chris Burden (1946–2015) was born in Boston, Massachusetts. He moved to California in 1965 and obtained a BFA at Pomona College, Claremont, California, in 1969 and later an MFA at the University of California in 1971. During the early 70s, Burden’s first mature works were characterized by the idea that the truly important, viable art of the future would not be with objects; the things that you could simply sell and hang on your wall. Instead art would be ephemeral and address political, social, environmental, and technological change. Burden, with his shockingly simple, unforgettable, "here and now" performances, shook the conventional art world and took this new art form to its extreme. The images of Burden that continue to resonate in public mind are of a young man who had himself shot (Shoot, 1971), locked up (Five Day Locker Piece, 1971), electrocuted (Doorway to Heaven, 1973), cut (Through the Night Softly, 1973), crucified (Trans-fixed, 1974), and advertised on television (4 TV Ads, 1937–77).

Chris Burden worked and lived in California and has been represented by Gagosian Gallery since 1991. He has had major retrospectives at the Newport Harbor Art Museum, Newport Beach, California (1988), and the MAK-Austrian Museum of Applied Arts, Vienna (1996). In 1999 Burden exhibited at the 48th Venice Biennale and the Tate Gallery in London. In the summer of 2008, What My Dad Gave Me, Burden’s 65-foot-tall skyscraper made of one million Erector set parts, stood in front of Rockefeller Center, New York City. And in 2013–14, the New Museum, New York, presented Extreme Measures, the artist’s first major US exhibition in over 25 years. Burden’s installations and sculptures, which have been exhibited all over the world, have continually challenged viewers’ beliefs and attitudes about art and the contemporary world.

Read more about about Burden's work with LACMA in this Unframed post.

This exhibition was organized by the Los Angeles County Museum of Art with support from Gagosian Gallery.

All exhibitions at LACMA are underwritten by the LACMA Exhibitions Fund. Major annual support is provided by Kitzia and Richard Goodman, with generous annual funding from Janet Chann and Michael Irwin in memory of George Chann, Emily and Teddy Greenspan, Jenna and Jason Grosfeld, and Lenore and Richard Wayne. 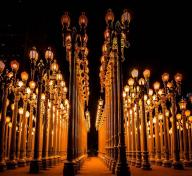 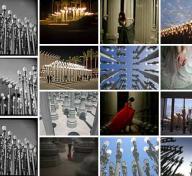 Chris Burden's Metropolis II on Its Way to LACMA
November 22, 2010