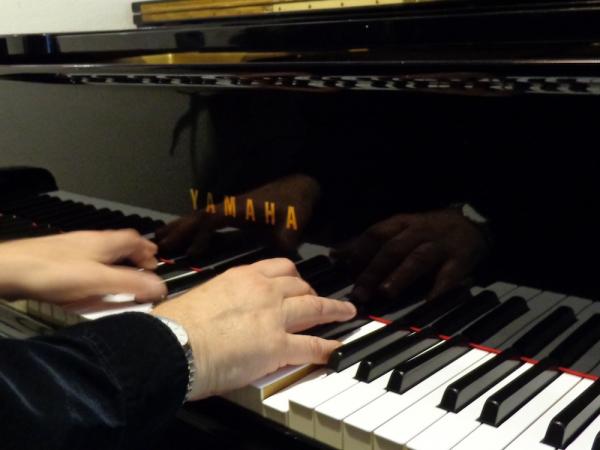 Michael Mortilla in his studio

Behind the Score: Michael Mortilla in New Objectivity

With New Objectivity: Modern German Art in the Weimar Republic, 1919–1933 closing on Monday, January 18, it seems appropriate for the exhibition to go out on a high note. This Sunday, award-winning composer, pianist, and sound designer Michael Mortilla will perform live improvised accompaniment to the four silent films screened consecutively in the exhibition. His performance will last the entire day, beginning at 10:30 am with the opening shot of Berlin, Symphony of a Great City (1927), and ending with the final shot of a second showing of Berlin at 6:50 pm.

In advance of his performance, I met Mortilla in his studio in Burbank to discuss the upcoming event and gain some insight into his process. Our conversation below is condensed and edited for clarity.

This performance is nine hours. Have you ever performed a piece of such length?

Close—I once performed about seven hours of silent film in one day. The challenge is to remain faithful to the films and not wander off on some tangent. It’s all improvisation. I read the film almost as if I’m doing audio translation, but instead of using language, I’m using music—which is my second language. Actually, it’s my first language. English is my second.

Have you seen the films in New Objectivity? Or are you going in blind?

I’ve played Pandora’s Box (1929) and People On Sunday (1930) a number of times, and I know the storylines pretty well. Berlin, Symphony of a Great City—I’ve seen it once when I played it cold, about seven years ago. And I remember thinking, this is one of the hardest films I’ve ever had to play. Because it’s scenic, basically. Another film is Slums of Berlin (1925)—I have no idea yet what that one is. I’ll go to LACMA and screen those beforehand. I’ll try to sit for the whole nine hours, to get a sense of the problems I’ll face—can I sit in one place for nine hours? Otherwise, the only preparation is practicing at home. 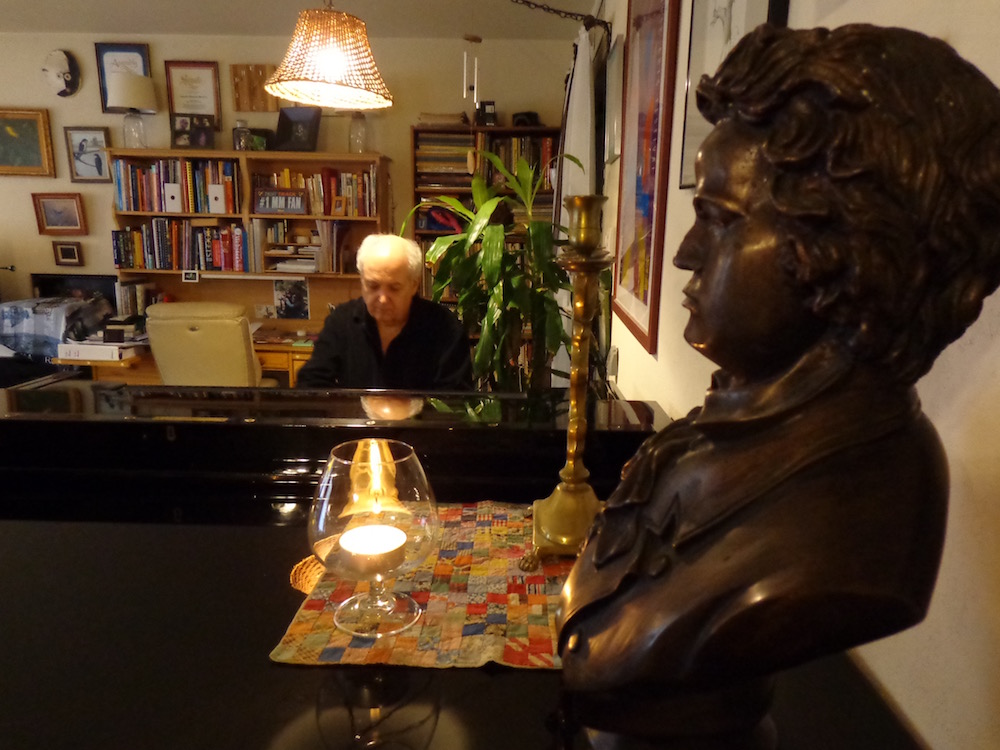 Michael Mortilla in his studio

How do you prepare? What are you doing now to get ready for this performance?

The “think method” from The Music Man [in which thinking of a piece of music over and over will tell you how to play it.] That’s actually pretty true, because with improvisation, it’s just your imagination and your technical skill for executing what you’re thinking. What I usually do—it’s no different now than in my daily routine—is play through a lot of classical repertoire, but the bulk of what I do is improvisation. I’ll improvise in the style of certain composers, take off on the score and pick it up later on, add a different ornamentation, change the keys from major to minor— weird stuff.

Do you find yourself focusing more right now on German composers?

Not any more than I normally do, which is to say that I’m immersed in them. Viennese, German… Mozart, Bach, and Beethoven are my three go-tos. There’s not a day that goes by that I don’t play their music. They’re a different period [from the work in New Objectivity], but it’s still a Germanic language to me. If I hear an American composer, I hear an American dialect. When I play German composers, it’s a German dialect. It’s a real language to me.

And I hear words, I hear thoughts. There are times when I hear Mozart talking to his father. Other times, he’s talking to his wife. I hear Beethoven talking to people he doesn’t like, which was most of them. Or Bach talking to his sons. To me, music is about a conversation with a listener—it’s not just sitting down and performing.

How do you think the audience at the LACMA performance will change the way you improvise?

It’s going to be unusual because I’ll have a different audience at almost every moment of the day. It will be interesting to see what happens when people walk in in the middle of a film. They won’t have the backstory—they’ll see Louise Brooks get stabbed and won’t know why, so they won’t feel anything necessarily for her, or they might feel more for her than they should. I’ll just play it the way I see it, and assume people will get a sense of what’s going on.

How do you find that contemporary audiences engage with your improvisations to silent films?

It varies. The uninitiated most often think I’m playing a piece of music I wrote or memorized. The question I most often get after a show is, “How do you remember all that music?” Others will come up and say they didn’t realize that there was a musician. Sometimes they’ll even say they heard dialogue or sound effects, and of course they didn’t. To me, that’s the ultimate compliment: Tell me that you didn’t hear the music—that you heard the characters talking or trains passing or the gun going off. That’s the ultimate compliment: if I become completely transparent.

When you watch a film for which you plan to improvise a score, are you picking out thematic events to build the musical themes around?

Absolutely—but I don’t limit myself. I could prepare an entire thing in B-flat minor and have all these things I want to do, and the curtain comes up and I think, oh, I’ll do it in E minor. I’ll do a completely different score. I might be more surprised at what comes out than the audience is. I just don’t let on.

What do you think of the artwork in New Objectivity?

I was blown away. There’s this style of busy-ness, and juxtaposing things that you don’t normally see in art. It’s really informed my playing—not just for these films, but for other films I’ve done since. I think differently after seeing this exhibition and realizing these films don’t just happen as cute little stories—they come out of a culture. As an artist, if you’re reinterpreting art, I think it behooves you to be informed about what that culture is.

In what ways do you think the artwork, the films, and your music will complement and impact each other during the performance?

I also wonder about that. There’s no door in the space, so the music, regardless of how low I play it or how loud, will echo. I wonder how that will affect people throughout the exhibit. I don’t necessarily want to impose on people what they’re supposed to be feeling. I don’t try to impose too much empathy, hate, any of that stuff. I try to leave the score almost as a neutral palette, just an audio description of what’s on the screen, and hope that the audience will decide for themselves whether or not they like the heroine, whether this character’s a villain, whether or not it’s funny.

I’ll be aware of the art, and certainly aware of the responsibility I have to the film, but also aware of the responsibility I have to the people in the gallery, which is not to distract them too terribly. Because that would be easy to do. But at the same time, there are moments like in the opening of Berlin, Symphony of a Great City, where a huge locomotive is coming through. And I’m not going to play tinkly music for that—it’s going to be full-out locomotive sounds for me.

That’s the last film to be repeated—I’ll be exhausted by the time that train comes in.

Michael Mortilla’s live performance is free with general admission on Sunday. Take the opportunity to visit New Objectivity for the first time, or re-visit this significant exhibition with musical accompaniment before it closes.

The complete lineup for Sunday, with a five-to-ten minute break scheduled between each screening:

1 comment
Rachel Polsky says:
This is fantastic! Thanks for the insight into Mortilla's creative process. As a mere mortal, I can't even fathom sitting in one spot for 9 hours... 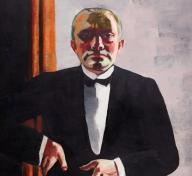 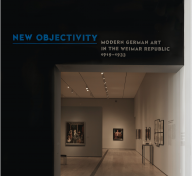 Homosexuality Is a German Invention
December 14, 2015