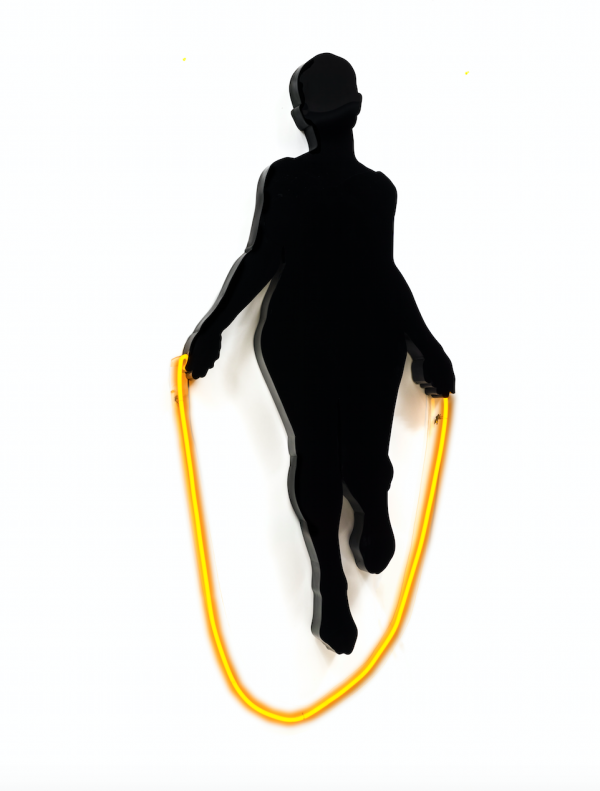 Idelle Weber was an active participant in the 1960s Pop art movement, and Jump Rope (1967–1968) was the most important sculpture she realized. Weber was introduced to Modern art in Chicago and Beverly Hills through private collections, local art museums, schools, and artists. Relocating to the art capital of the United States in 1957, she quickly became an active participant in New York circles, meeting and socializing with such better-known figures as George Segal, Yayoi Kusama, Claes Oldenburg, and Lucas Samaras. There she continued her interest in figuration, moving stylistically and conceptually toward Pop art.

Her paintings and sculpture exemplify many of the characteristics identified with the movement: references to mainstream culture and product branding, large-scale urban subjects, graphic flatness, and bright hues. Rather than appropriating consumer products, as many of the Pop artists did, she more often alluded to the social transformations occurring, sometimes even referencing television series and political events. Her anonymous, black figure silhouettes reflected the stereotyping of urban office workers and women’s domestic roles then being glorified through mass media. Not ironically, the popular recent television series “Mad Men” seems to have “borrowed” some of her motifs.

Weber was a member of E.A.T. (Experiments in Art and Technology), sponsored by Bell Laboratories to encourage scientists and engineers to work cooperatively with artists in creating innovative works. Best known for its radical 1966 performances incorporating new technologies such as video and computer-generated music, the project also held numerous lectures on such topics as polymer materials, holograms, lasers, and Edwin Land’s instant photography (Polaroids). The E.A.T. lectures Weber attended, as well as the example of light artists Dan Flavin and her close friend Stephen Antonakos, encouraged her experiments. Weber would have been quite amenable to neon; she was already familiar with its practical use, as Los Angeles had been the illuminated sign capital since the 1920s.

The 1960s witnessed more female artists experimenting with non-traditional materials than ever before, and thereby contributing substantially to the transformation of American sculpture. In the past few years, several such works—Dorothea Tanning’s soft cloth sculpture Xmas, and Nancy Grossman’s black leather head No Name—have entered LACMA’s collection through the generosity of the Collectors Committee as well as individual participants. This important icon of Pop art was acquired during the 30th Collectors Committee, and will soon be on view in the American Art galleries.