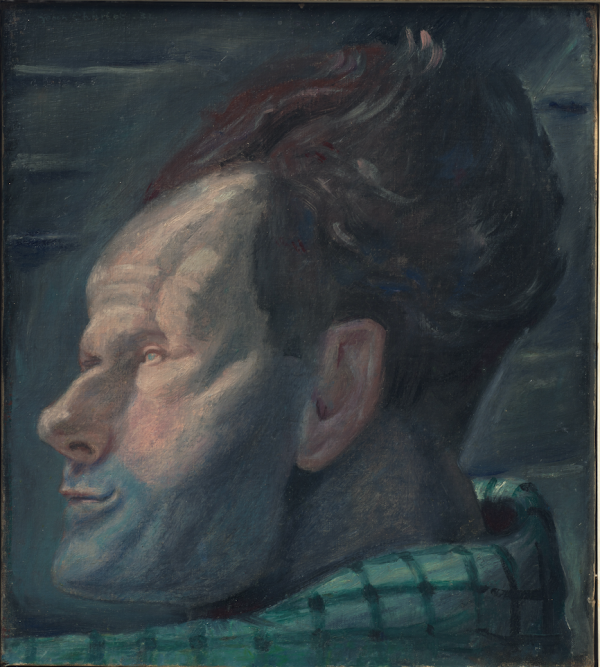 Recently, LACMA acquired an outstanding portrait by Jean Charlot (born in Paris, active in Mexico and the United States, 1898–1979) of his friend, the Russian avant-garde filmmaker Sergei Eisenstein (1898–1948). Below is a conversation I had with Martin Charlot, Jean Charlot’s son, about the history of this poignant picture and its wider implications for the city of Los Angeles.

Martin, as you know, since I first saw this picture hanging in your studio over a decade ago, I was completely taken by it. I know the painting has held a very special place for you over the years. Can you tell me why it has been so important for you personally?

As I am sure I mentioned to you, Sergei and his cinematographer Eduard Tisse (1897–1961) invited Papa to a party my mother, Dorothy Day, and her roommate friend (Ione Robinson) were giving in Mexico City. In so doing they introduced my parents to each other. Because of this historical moment I owe my life to Sergei, Tisse, and the cinema. Besides being an outstanding portrait and a dramatic tour de force, it was given to me by my father as a gift from papa to son. This, of course, is another reason why this painting is so personal to me. As you observed, I kept it displayed in my studio where I enjoyed it every day. It is an image and a gift that has always meant a great deal to me.

Your father was a seminal figure in the development of Mexican modernism. He was only twenty-three years old when he arrived in Mexico from Paris in 1921. Soon after he was commissioned to paint one of the murals at the Antiguo Colegio de San Ildefonso in Mexico City, which included works by Diego Rivera, David Alfaro Siqueiros, and José Clemente Orozco—the so-called “Los tres grandes” (three great ones) of the Mexican muralist movement. What was the significance of his participation in this project?

From what I understand (my brother John is writing a biography of our father), Diego Rivera had started his mural in the auditorium but Siqueiros and Orozco had not yet begun their work. Everybody worked at different paces, and my father surprised his colleagues by completing his mural in 37 working days! Because Diego Rivera’s mural Creation was still in process, behind closed doors, Papa’s Massacre in the Main Temple was the first completed and accessible mural of the group. Papa proudly (and justly) claimed the first completed fresco since colonial times, a technique that later became the medium of choice for the Mexican muralists. Massacre was also important for its dynamic geometric composition, which offered an alternative to the static classicism of Rivera’s Creation painted in encaustic.

Did your father ever tell you what attracted him to Mexico in the first place?

Papa had a lot of family in Mexico, and was even part Mexican. After his intense experience of hand-to-hand trench warfare during World War I, and the failure of the family business following his father’s death, moving with his mother to visit his Mexican relatives was something he wanted to do. All his life, his family had told him about Mexico, and about Mexican artifacts.

Your father then moved to New York in October, 1928 (and later settled in Hawaii in 1949), but throughout his lifetime he maintained a close bond with Mexico. Much of his work continued to be devoted to Mexican themes, and he even wrote a foundational book on the history of Mexico’s Royal Academy of San Carlos (1962). In fact, it was during a short visit to Mexico in 1931 that he met Eisenstein, who at the time was filming his ill-fated experimental film ¡Que Viva México! Did your father share with you any memories about their encounter?

Papa told me how happy Sergei was in Mexico, that it was for him a very real taste of freedom, maybe his first and last taste of freedom. Both my parents spent time with Sergei and Tisse when they were filming ¡Que Viva México! at the hacienda of Tetlapayac, in the State of Hidalgo. Mama would sit with Sergei as he drew “automatic” drawings. Sergei churned them out quickly, without any thought of style, trying to pry from his subconscious any secret that could be discovered beyond his acute intelligence. Sergei was so mischievous, finding little jokes that he could play on his friends—nothing mean, rather a gentle whimsy that would leave a lingering smile.

It is interesting that throughout his career, your father painted some 175 portraits. However, this remained a highly private and personal aspect of his work. His Portrait of Sergei Eisenstein is particularly captivating, almost Daumier-like in its expressive quality; it shows the Soviet filmmaker deep in thought, looking out into an imaginary horizon. One of the features that immediately caught my attention is the way this relatively small work is painted with quick, impressionistic brushstrokes, and yet how solid the sitter appears. What do you think your father was trying to capture?

There is a unique blue haze that permeates his hair, as though his thoughts were in the clouds. This is an unusually delicate touch for a portrait that looks more like that of a lumberjack than an intellectual artist, which Sergei was. Papa loved the idea of the artist as laborer, and he painted Eisenstein with a workman’s shirt. For Papa, who dressed in paint- and mortar-splattered clothes to climb up onto the scaffold in order to paint his frescoes, the artist as worker was a very real concept. His unshaved face is not a fashion statement but that of a working man. And he is also pictured with such small, intense eyes. There is definitely a sense of monumentality.

Finally, Martin, why do you think LACMA is the right place for this special picture?

My son, Kipano, had wanted me to gift the painting to him and it was my intention to do so. What had meant so much to me I knew would mean the same to him. But then when I saw how much you took to it, I could understand (as did my son) what a perfect fit it would be for LACMA, the museum in the world capital of cinema.

And it is also interesting to recall, of course, that both Eisenstein and your father had direct connections with Los Angeles. Eisenstein came to Hollywood in 1930 to work with Paramount Studios and study the use of sound in motion pictures, and your father spent time here in the 1930s and ’40s, where he collaborated with the printer Lynton R. Kistler (1897–1993) on a series of lithographs, gave a series of lectures to artists at the Disney Studios, and taught at the Chouinard Art Institute. The painting is truly a gift to the city.