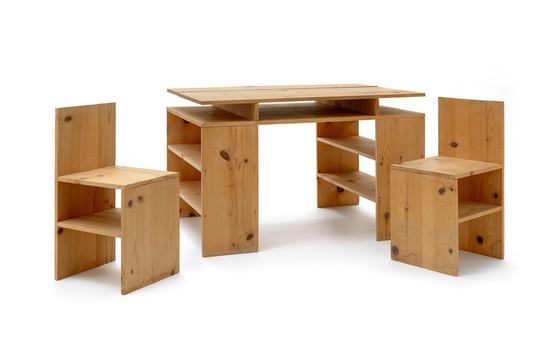 Who doesn’t love a good reunion? Yesterday, February 12, LACMA and The Huntington Library, Art Collections, and Botanical Gardens announced their joint acquisition of two prototype chairs by American artist Donald Judd, one of the major figures of minimal art. The chairs will be reunited with Judd’s prototype desk acquired by LACMA in 2011. With the chairs acquisition, LACMA and The Huntington will now share ownership of the newly reconstituted furniture suite.

Judd’s prototype desk and chairs are among the first examples of what the artist himself described as “roughly made pine furniture made by me and others in Texas.” Having moved to Marfa, Texas, with his family in the late 1970s, Judd’s turn to furniture was born of necessity; unable to source furniture for his children’s bedrooms, he designed a bed and matching set of desk and chairs that could easily be assembled from pieces of wood, cut to length at a lumber yard.

LACMA acquired the prototype desk Judd made for his son Flavin through the 2011 Collectors Committee, with funds provided by trustee Kelvin Davis in honor of his brother, Paul Davis. The companion chairs remained in Flavin Judd’s possession, and the artist’s son was instrumental in facilitating the happy reunion. Davis, who also sits on the Board of Overseers of The Huntington, helped make the collaborative acquisition possible by providing partial funding for the chairs.

As some of the earliest furniture works made by Judd, the prototype desk and chairs are highly significant in that they served as the inspiration and springboard for much of Judd’s subsequent furniture design practice. Later, Judd would execute more refined versions of his designs in fine hardwoods for his building at 101 Spring Street in New York City, and eventually began designing and producing furniture for commercial sale; Judd-designed furniture continues to be produced under the supervision of the Judd Foundation. Today, the enormous influence and legacy of Judd’s minimal design aesthetic can be seen in the work of architects like John Pawson, whose mid-1990s design for the Calvin Klein flagship store in Manhattan was populated with examples of Judd furniture. And although Judd himself was adamant about the separation between his art and furniture, his work nevertheless paved the way for a generation of artists such as Jorge Pardo, Tobias Rehberger, and Andrea Zittel, whose work seamlessly integrates art and design. 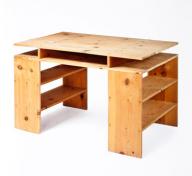