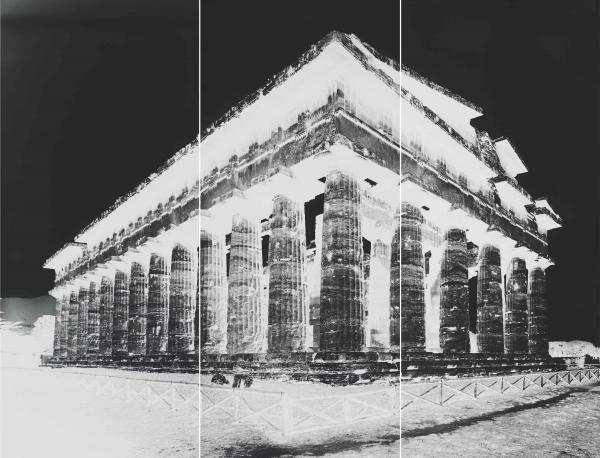 Artist Vera Lutter makes large scale photographs using one of the oldest optical technologies still in use, that of the camera obscura. Long before the invention of photography, it was known that if light traveled through a tiny hole into a darkened room, an image of the external world (off which the light rays had reflected) would re-form upside down on a wall opposite the tiny opening. Lutter herself began to use a camera obscura in the mid-1990s after moving to New York City for an artist fellowship. Living at the time in an apartment in midtown Manhattan, she transformed one room of her apartment into a room-sized camera obscura to document the city outside her window.

Temple of Nettuno, Paestum, XVIII: October 18, 2015 is from a series of photographs Lutter made in Paestum, Italy, at the site of an ancient Greek city whose ruins include three relatively intact temples dating from the 5th and 6th centuries BCE. Taken on a clear bright day, the photograph features an inky black sky as a result of its negative-positive reversal, while the sharp level of detail enabled by the dark-light contrast serves to highlight the texture of the temple’s fluted Doric columns. As with all of Lutter’s photographs, because the projected image inscribes itself directly onto the paper, each print is a unique object that cannot be reprinted or reproduced. The work’s title documents the location and date of the exposure, while the Roman numeral indicates the photograph’s chronological place in the ordered sequence of images taken at a particular site.

Over the course of her career, Lutter has photographed subjects ranging from the canals of Venice, to the New York skyline, to a Zeppelin hangar in Friedrichshafen, Germany. In 1999, she was commissioned by Michael Govan, who was then director of Dia Art Foundation, to photograph the interiors of the Nabisco Factory in Beacon, New York, that would later become Dia: Beacon. Currently, Lutter is in the midst of a highly ambitious residency at LACMA, photographing both interior and exterior views of the buildings on the LACMA campus that are slated for demolition.

Temple of Nettuno, Paestum, XVIII: October 18, 2015 is an especially fitting acquisition for an encyclopedic museum whose art collections range across historical periods and feature objects from around the world. Soon after the invention of photography, the new medium was used to disseminate breathtaking views of ancient archaeological sites, much as early art museums were instrumental in bringing knowledge of the ancient world to a greater viewing public. In the same way, Lutter’s photograph of Paestum offers an evocative contemporary perspective onto a monument from the past.