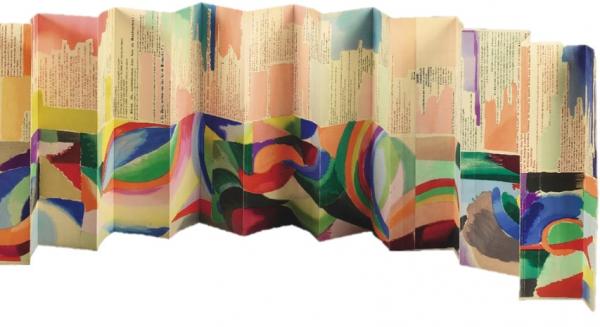 Sonia Delaunay was a key figure in the Parisian avant-garde, whose vivid and colorful work spanned painting, fashion, and design. Born in Odessa and trained in Germany, Sonia Delaunay moved to Paris in 1906 to join the emerging avant-garde. She met and married the artist Robert Delaunay, with whom she developed “Simultaneism”—abstract compositions of dynamic contrasting colors and shapes. Her work expressed the energy of modern urban life, celebrating the birth of electric street lighting and the excitement of contemporary ballet and ballrooms.

La Prose du Transsibérien et de la Petite Jehanne de France, (Prose of the Trans-Siberian and of Little Jehanne of France), 1913, stands as one of the purest expressions of European modernism—as art, poetry, book making, and as a collaboration between Sonia Delaunay and poet Blaise Cendrars. Called “the first simultaneous book,” it is a stream-of-consciousness poem by Cendrars paired with gouache and watercolor stencils  by Delaunay. Her colors seep into and between Cendrars’ text, printed in multiple colors and sizes. The book is made up of a single sheet of paper, divided down the center, and folded like an accordion through twenty-two panels to the length of almost seven feet. It is created using ten different typefaces in different sizes and colors which effectively simulate movement. It is meant to be seen and read at the same time, like a conductor reads an orchestral score.

Cendrars’ work is a memory poem—about his youth spent in Russia—but the story is recalled as if it were happening at the moment of recollection. The imaginary story tells of a trip in 1905 on the newly opened Trans-Siberian Express Railway, departing Moscow during the unrest of the last days of the Sino-Japanese War. In the midst of this trip the poet’s thoughts turn to his childhood, to memories of his days in Paris and the fantasies about tropical paradises, urged on by the repetitive questions, “Blaise, say, are we really a long way from Montmartre?” from his traveling companion, a young French prostitute named after Joan of Arc. The text ends in Paris, which is represented by the Eiffel Tower at the bottom of the poem. The Eiffel Tower, the tallest building in Paris, had also served as a radio tower and is thus a symbol of Paris's connection to the world as well as of modernity. Cendrars and Delaunay also intended another connection to the Eiffel Tower: they initially planned to print 150 copies of the book, which measures over six feet in length. If laid end-to-end, together they would have equaled the tower's height.

Announced in 1913 with a flurry of publicity, this work is celebrated as much for its lyric beauty as for its unmatched composition of colors by Delaunay. The edition size was supposed to be 150 numbered and signed copies, although somewhere between 60–100 copies are thought to have been produced.

This particular example, number 139, inscribed by Cendrars to the Chilean artist Manuel Ortiz de Zárate, has a particularly interesting provenance, as it was Ortiz Zárate who introduced Diego Rivera to Picasso in Paris in 1914. This example has remained closed in book form with its hand-colored wallet cover, and thus its color is bright and unfaded. Having examined a dozen copies in museums and libraries in the United States and Europe, this appears to be one of the freshest copy in book form. La Prose du Transsibérien et de la Petite Jehanne de France, a landmark of twentieth century abstraction, joins the prospectus and the portfolio cover that the museum was able to acquire in 2013.

During our 31st annual Collectors Committee Weekend (April 21–22), members of LACMA's Collectors Commitee generously helped the museum acquire nine works of art spanning a breadth of eras and cultures. Check back tomorrow to learn about another acquisition.