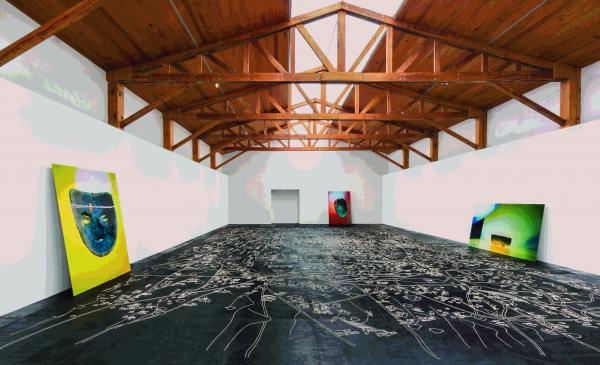 Mariana Castillo Deball is one of the most innovative and prolific artists working today. She has collaborated with archaeologists, conservators, novelists, mathematicians, and physicists, among others, on her elegant work in sculpture, photography, drawing, video, printmaking, and artist books. Over the last decade, she has been included in important global exhibitions, such as the 54th Venice Biennale (2011); documenta 13 (2012); the 8th Berlin Biennale (2014); Liverpool Biennial (2016); and Sao Paulo Biennial (2016). Castillo Deball is a recipient of the Prix de Rome (2004), Zurich Art Prize (2012), and Preis der Nationalgalerie für Junge Kunst, Berlin (2013).

Castillo Deball often draws from archival documents and objects for subject matter, but also for the stories they can relay about museum collecting practices, national patrimony, and the global exchange of cultural goods. The image detailed in the large floor sculpture and series of prints that comprise Vista de Ojos is a cartographic rendering of Tenochtitlan (present day Mexico City), just 30 years after the cataclysmic arrival of the Spaniards—making it the earliest depiction of the region post-conquest. The Map of Santa Cruz—also known as the Uppsala map due to its current location in a Swedish archive—has been dated to the 1550s, though some theorize that it might have been done as early as 1537. Alfonso de Santa Cruz, official cartographer of Charles V, was originally considered the author of the map, but more recent scholarship connects its perspective and iconography to indigenous artists.

Vista de ojos, which can be translated as “overview of the eye,” was a term used by the Spanish colonial authorities to verify the validity of territories represented in maps, as many were executed by or with the assistance of indigenous artists called tlacuilos. Castillo Deball enlarges the 16th century map and turns it into an expansive sculptural environment allowing spectators to move through it and experience the reciprocal transformation of Mesoamerican and European cartographies.

The wood floor also serves as a printing matrix, indicating the ways in which these early images of a colonized territory circulated as prints for a Spanish elite. As art historian Barbara Mundy has written of the map, it also highlights the “widespread knowledge and appreciation” of elaborate networks of waterways. Castillo Deball is interested in this hybrid space where an indigenous perspective is coming into contact with the map as territorial claim. As such, she considers it not merely a map but a representation of moments, ecologies, and spatial concepts.

El Donde estoy va desapareciendo (The Where I am Is Vanishing) (2011) is a video animation that brings to light the “unsettled life” of the Codex Borgia, a pre-conquest Mesoamerican religious manuscript. The life and transit of the codex is given voice; from the deer that gives its skin to provide a support for the drawing; to the Nahuatl language of the artist who drew it; and on to the Spanish, Italian, German, and English archaeologists and scholars who attempted to decipher it. The codex now resides in the archives of the Vatican, and like the Uppsala map, is thoroughly distanced from its origins but available to all through the 21st century digital download.

Vista de Ojos and El Donde… are eloquent examples of the role contemporary artists can play in, as one critic noted of Castillo Deball, “teasing out ribbons of history from inanimate objects.”