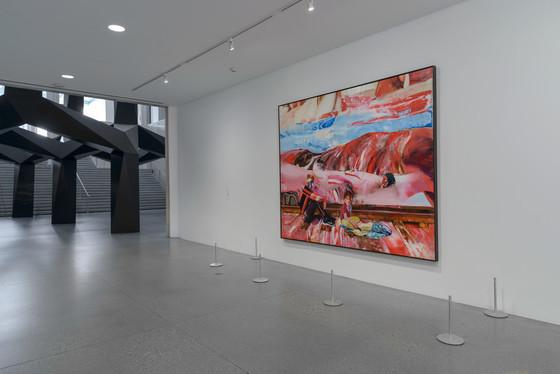 Adrian Ghenie is a Romanian painter living in Berlin gaining immense traction in the art world thanks to his compelling large-scale canvas works. His recent painting Rest During Flight Into Egypt (2016) is currently featured in LACMA’s Ahmanson Lobby and is the first acquisition of this artist’s work by the museum. As subtle commentary on the state of the Syrian refugee crisis in Europe today, it serves as a poignant reminder of the strife associated with forced displacement, which has proven to be a timeless part of the human condition.

Several figures are set amid a wash of thick color, their faces blurred beyond recognition. A child sits innocently in the foreground accompanied by a young man. A veiled woman completes the triad, engulfed by the colors around her; her face marred with magenta as if to reveal the flesh beneath her skin. This intersection between figuration and abstraction recalls the work of British painter Francis Bacon, whose distorted and grotesque faces were a characteristic fixture of his work.

An expanse of swirls in red and blue form a backdrop for the solemn figures. The blues evoke the endless stretches of water that people have traversed to escape harm; the red an allusion to the violence and massacre that caused the desperate need to flee. The scale of the canvas is so large as to draw viewers in and implicate them in its message, providing a dramatic encounter upon entering the museum.

The theme of the “Rest on the Flight into Egypt” has been revisited multiple times in painting. These pictures depict the moment of respite during the Holy Family’s exodus across the Sinai, and find their source in a fleeting mention of this journey in the New Testament. The narrative was later embellished in the medieval period, and artists through time have borrowed the story to suit the needs of their own aesthetic, social, or political messages. Ghenie joins a long lineage of painters who have dealt with this motif and adapts it for a contemporary audience and cause: the refugee child in the foreground a stand-in for Christ; the woman a modern-day Mary. 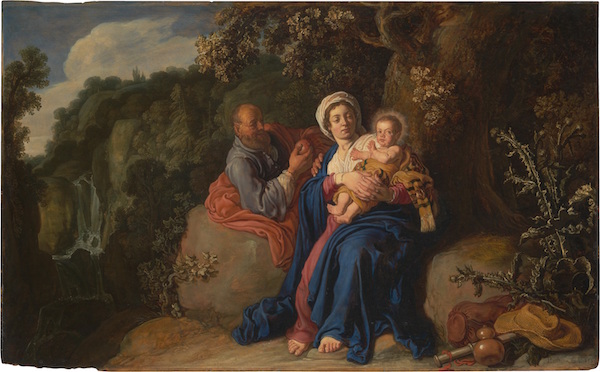 Pieter Lastman, The Rest On the Flight into Egypt, 1620, National Gallery, London 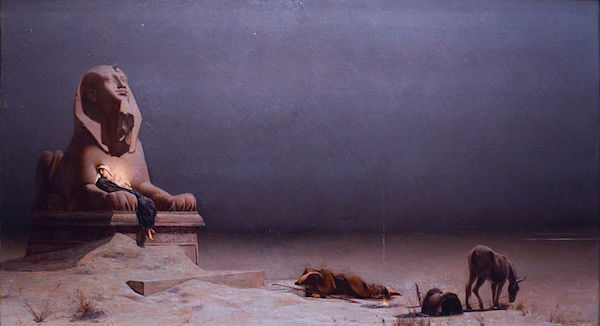 Ghenie’s method is idiosyncratic. He begins each painting with a smaller collage study, often made up of stock images that he then renders in oil. He applies paint using industrial tools, rather than a brush, in countless accretive layers. In certain instances, Ghenie uses stencils and even applies paint with cling film to achieve his desired shapes and textures. In other places, he takes a palette knife and removes paint to uncover elements that had been hidden away in the course of his process.

Ghenie was raised in communist Romania, and while he says he was too young for the political ecosystem he lived in to leave a lasting impression, his upbringing has certainly oriented his work toward contemporary social issues in Europe. The turmoil that has hounded the continent for over a century rises to the surface of his unsettling canvases, the trauma painted into his thick impasto.

And such is the quiet power of Ghenie’s work: its ability to reveal art history as a long documentation of epic human struggle. By cross-referencing styles and subjects with his forbears, he inserts his work into a tradition that dates back to the Renaissance and beyond. The story of the Biblical trio escaping Roman persecution in the night provides an apt metaphor for the continued global contestations surrounding immigration and exile, showing it to be unbound by time or place. Melancholy resounds in this dreamscape, a potent reminder of the universality and endurance of hardship.

Adrian Ghenie’s Rest During Flight Into Egypt is on view in the Ahmanson Building, Level 1.