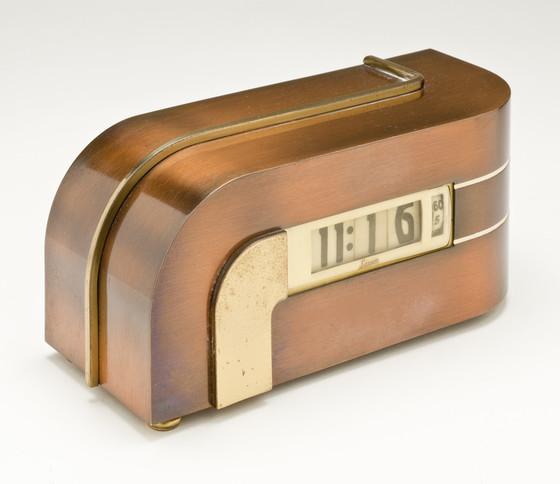 Bobbye Tigerman, Marilyn B. and Calvin B. Gross Curator
Decorative arts and design

The Lawson Time "Zephyr" Clock is a masterpiece of California streamline design. One of the most successful product designs created in California in the 1930s, the "Zephyr" Clock epitomizes the glamour and speed of modern life. The clock’s low, horizontal emphasis, curving silhouette, and contrasting metals are characteristic of streamlining, a popular style of design during the Great Depression for buildings, trains, cars, and industrial design objects. In 1934, the Burlington Railroad introduced the streamlined Burlington Zephyr train and displayed it at the Century of Progress Exposition in Chicago, and it could be from this source that the clock was named. The clock’s futurism is not just superficial, though—it was promoted as one of the first digital clocks, allowing one to read “exact time at a glance!” While the clock has been attributed to the German émigré designer Kem Weber in the past because he owned one, it is no longer believed that he designed this model.

"Zephyr" Clock is on view in the Art of the Americas Building, Level 3.