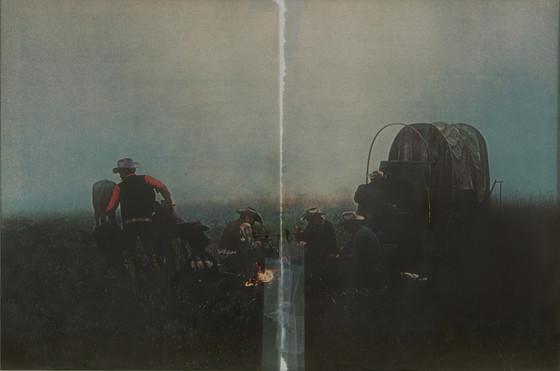 Last year, Richard Prince (United States, b. 1949) completed a new body of work Untitled (cowboy), recently acquired and debuted by LACMA. Prince made the monumental photographs, which measure six feet high by eight feet wide, from high-resolution scans of 1980s and ’90s Marlboro advertisements depicting cowboys in the landscape. Torn edges and tape attest to their original context in mass-market magazines. Enlarged and seen together, Prince’s photographs achieve the grandeur of 19th-century history painting while also deconstructing the iconography of the American West.

Prince’s engagement with the cowboy motif began nearly 40 years ago, when he was an aspiring painter working for Time Inc.’s tear sheet department, clipping texts for magazine writers. After he removed the articles, he was left with advertisements: glossy pictures of commodities, models, and other objects of desire. Between 1980 and 1992, Prince paid particular attention to the motif of the cowboy, as presented in a series of advertisements for Marlboro cigarettes. Prince began to re-photograph the advertisements with a 35mm camera, cropping them to eliminate text. He took his slides to commercial labs to be developed and printed, and then presented the enlarged prints as limited-edition artworks of his own. Prince’s re-photography had an explosive effect on the art world, provoking lawsuits and setting auction records. With this controversial practice, he redefined what it means to “take” a photograph.

Thirty years prior to Prince’s appropriation of the Marlboro advertisements, Life magazine published a photo-essay by Leonard McCombe, depicting the daily life of Texan rancher Clarence Hailey Long. The story was billed as a last look at the “old time cowboy” whose livelihood seemed to be headed toward extinction. The next generation—“feebler men,” according to the article—insisted on comfort, day work, and higher pay for fewer skills. As postwar American culture began to consolidate around ideals of masculinity and modernity, McCombe’s photographs effectively transformed Long’s life into mythology. By the mid-1950s, advertising executive Leo Burnett adopted McCombe’s images as the conceptual framework for the Marlboro Man campaign.

Richard Prince has said that our collective unconscious holds all kinds of clichés—“clichés so immediate, so obvious” that at times we respond to real-life situations as if we were actors in a movie. Representations in print and on film have made the image of the cowboy ubiquitous in Americans’ imaginations and memories. In his re-photography, Prince unpacks the layers of the cowboy construct; the artist describes his Untitled (cowboy) series as “normalcy as special effect.”

Celebrating Local Donors in the Study Center for Photography
May 14, 2019