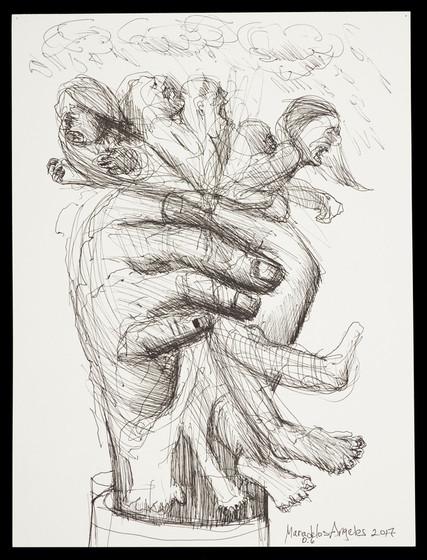 In conjunction with the ongoing exhibition A Universal History of Infamy: Those of This America at LACMA’s satellite gallery in Charles White Elementary School, featured artist Maria de Los Angeles will lead a family workshop and participate in conversation as part of exhibition-related programming in the month of March. De Los Angeles was born in 1988 in Michoacán, Mexico, and emigrated to Santa Rosa, California, in 2000 with her family. Since then, she has earned an associate’s degree in painting from Santa Rosa Junior College (2010), a BFA from Pratt Institute (2013), and an MFA from Yale School of Art (2015). De Los Angeles currently practices and teaches in New York. We recently asked Maria a few questions about the intersection of art and activism, and how her position as a DACA-recipient has influenced her work as an artist living in the United States. 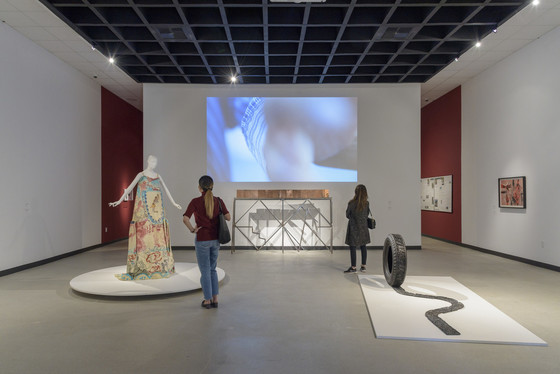 Tell us a bit about yourself and how you came to practice art.

I have been drawing since I was eight years old. I took my first art class in seventh grade when I moved to Santa Rosa. That was when I realized that moving to the United States had been a good thing for me. In Mexico, I had completed only the equivalent of second grade at age 11 and now I found myself in the seventh grade that same year. I also realized in eighth grade, when I sold my first drawings and string puppets, that I could earn money from my art. I truly learned how to draw and paint when I attended Santa Rosa Junior College. My figure-drawing teacher suggested I go to a university to study art. He gave me a list of schools in California and on the East Coast. I told him I was undocumented and I likely couldn’t go to school. He said, "Apply anyway." I did. Surprisingly many schools accepted me, and I decided to attend Pratt Institute. Pratt offered me half off the tuition if I matched the rest. That summer I had art shows and received help from the local art collectors and businesses. The community in Sonoma County came out and supported me. I’m very thankful to them. 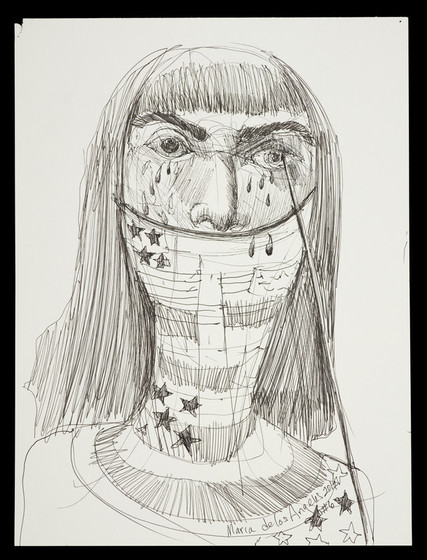 The exhibition showcases how art has been used as a powerful method of resistance. How does your work communicate that?

Art gives me a voice. Art provides a visual entry point into the subject of immigration and undocumented immigrants, which is often tied up in rhetoric. It doesn’t need translation; a strong image can speak to the basic desire we have to be happy and not exploited.

My drawings reflect my internal dialogue of coming of age undocumented, and my dresses are a portrait of me. I hope it reaches the universality of this experience—we all want a place to call home. Humanity has no Social Security Number, gender, or pigmentation of skin. Being an artist is an act of resistance and being an artist who is interested in the lives of others, especially those exploited by the system, makes it even more an act of resistance. By becoming an artist, I suggest there is still hope. I hope that people, after seeing my work, think about what is happening in the United States. I want those who have experienced my work to find it healing, to see the hope and the social issues contained in it. Making art and showing it keeps me hopeful. I intend my sculpture to be worn during protest performances and during public events. My ultimate goal is for my work to be a welcoming and beautiful way to speak about human experience and politics. 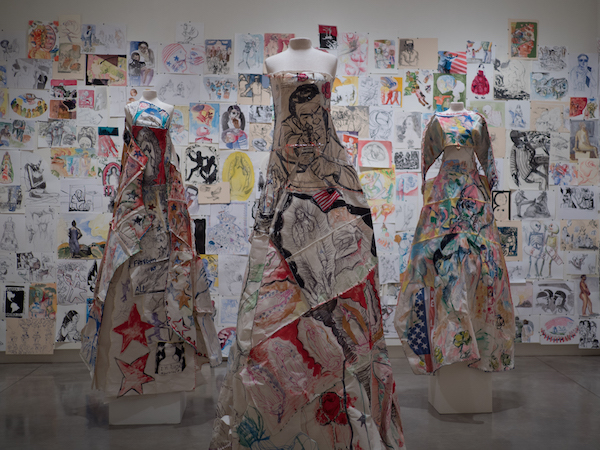 The Family Dress is one of the first works visitors see when they arrive to the exhibition and more of your dresses can be seen in your current presentation at the Schneider Museum of Art in Oregon. Can you tell us about why you’ve chosen this particular medium?

What we wear says a lot about who we are: our level of wealth and how we see ourselves. I find the dress, as a container for a portrait and for the human body, useful. I think sometimes law and social discourse tend to separate oneself from the real world, and then we become just numbers or statistics or stereotypes. I think putting art directly on the body or an object we associate with the body brings the extremes closer. I hope that this dress relates to people on a visceral level. 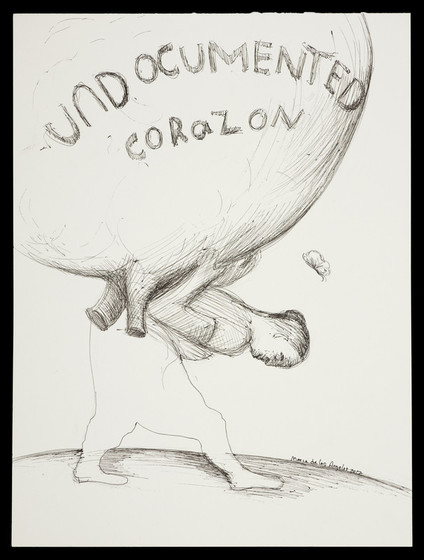 Your ink-on-paper Deportation Series is also featured in the presentation at Charles White. Can you talk to us about the series and how this further speaks to the message of resistance?

These four works are part of my 1,000-plus drawings that are part of the Deportation Series. The rest of the drawings are on view now at the Schneider Museum of Art in Oregon through March 17. I think stories can get exaggerated and become very distant from people’s humanity. My work points this out and attempts to personalize the experience.

I crossed the border as a child, but I am still tied to that moment in many ways. That moment has become ingrained in my legal status and my identity. The border is also a mythical, real, structural presence and a topic for debate. Deportations are at a high point and have been for the last three or four years.

This series of drawings explore real experiences, things I read, and about this border space and the gray zone we are in. They also talk about the many people in detention centers and the fact they have no human rights. If the government wishes, they can be held forever in these detention centers, which use them for labor. My drawings are about the raids, the border scenes, and my thoughts. Some are serious and others are funny. They are colorful because I can’t bear their darkness. They are lovely because we all need hope. The drawings become environments because these stories have inhabited my life and I want the viewer to feel the same. At the end of the day we are speaking about people. We are not a number or a sad story. We are human! I just want to tell a story that might affect how people see us.

Maria de Los Angeles will lead a workshop at Charles White Elementary School on Saturday, March 10 from 1:30 to 4:30 pm and will be featured in conversation on Saturday, March 24 at 1:30 pm. LACMA will host additional March workshops with Maria in North Hollywood, Compton, and East Los Angeles. Saturday programming at Charles White Elementary School is generously supported by United Airlines.