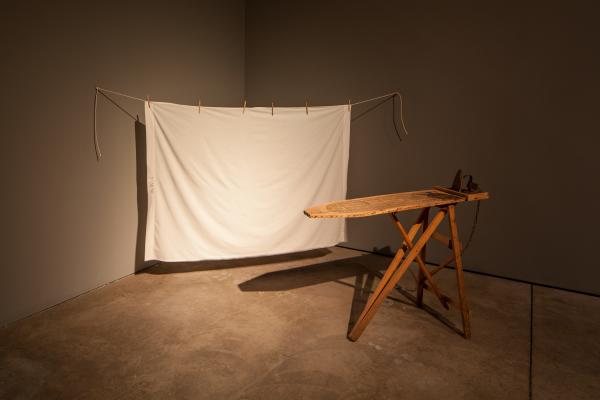 New Acquisition: Betye Saar's "I'll Bend But I Will Not Break"

One of the world’s most talented artists, Betye Saar consistently addresses issues of race, gender, and spirituality in her work. Part of the strong assemblage tradition of her native Southern California—which includes Ed Kienholz and Wallace Berman—Saar combines in her work objects found on travels around the world as well as in L.A. itself. Her sources and influences are as varied as Simon Rodia’s Watts Towers, Haitian Vodou fetishes, Australian Aboriginal paintings, Byzantine reliquaries, Native American leatherwork, and Egyptian artifacts.

I’ll Bend But I Will Not Break is one of Saar’s master statements. This sculptural tableau combines powerful overlapping references to slavery and slave ships, traditional female labor, the history of late 19th- and early 20th-century art, and modern-day racism. While the iron and ironing board generically refer to working-class women who labor as laundresses and maids—as seen in the work of Edgar Degas and Pablo Picasso, among many others—Saar’s ironing board also conjures up the specter of slavery. This specific ironing board is imprinted on top with a diagram of the British slave ship Brookes, showing how scores of black bodies were sandwiched into the ship’s lower deck. Saar’s diagram is borrowed directly from a well-known 18th-century engraving that became a signature image for abolitionists and has been described as "perhaps the most politically influential picture ever made." To reinforce the connection between the Brookes illustration and the impact that slavery had on American society, Saar superimposed the image of a traditional black mammy over the diagram. The iron—chained to the ironing board just as slaves were chained to slave ships—refers not only to female labor but also to the branding of slaves with branding irons. Saar brings the subject of racism into the 20th century via the the letters “KKK” appliquéd onto the sheet, a reference to the white sheets and hoods worn by the members of the Ku Klux Klan as they terrorize blacks, Jews, and others whom they revile. Saar has said about the sheet, “In order [for a Klan member] to wear a clean sheet to a Ku Klux Klan [rally], a black woman had to wash it.” In the tableau, the sheet is pinned to an ordinary laundry line, ready to be ironed by an absent figure, presumably a black woman.

Saar, now 92, is not nearly as well-known as she deserves, likely because she is black, a woman, and working in Los Angeles—three strikes against her in the art world until all too recently. But Saar's time has finally come: she recently had a solo show at the Prada Foundation in Milan and was included in conversation-changing group shows at Tate Modern and the Brooklyn Museum. This arresting tableau will be the first large-scale work by Saar to enter LACMA’s collection. It will be included in the artist’s upcoming LACMA exhibition Betye Saar: Call and Response, opening in the Resnick Pavilion in 2019.