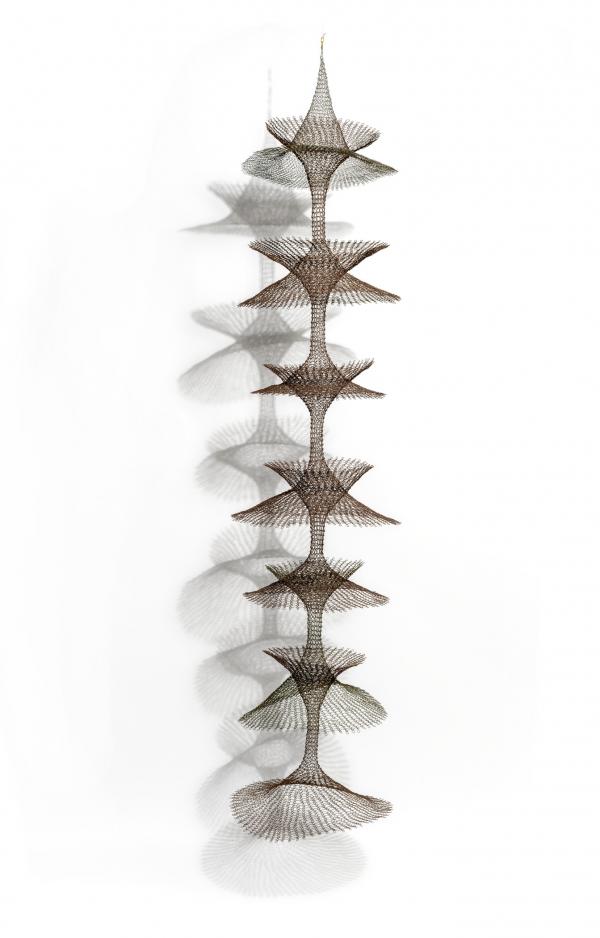 Ruth Asawa is renowned for her ethereal wire hangings that redefine the notion of sculpture as solid form. Her looping technique produced two works of art simultaneously—the sculpture itself and the magical shadow it casts. Recognized early in her career with solo and group exhibitions and ambitious public commissions, Asawa is now considered one of California’s most important artists.

The daughter of struggling Japanese immigrants, Asawa grew up on a vegetable farm in Norwalk, Los Angeles County. During World War II, she and her family were interned at the Santa Anita racetrack, where she first took art classes, and then at Rohwer Relocation Center in Arkansas. In 1943 she was allowed to attend Milwaukee State Teachers College, and planned to become an art teacher. Unable to complete her student teacher requirement because of racial discrimination, she enrolled in the radical art experiment that was Black Mountain College in 1946, studying drawing, design, and color theory with former Bauhaus master Josef Albers. Asawa learned from him the principle of “the meandering line,” reinforcing her own beliefs about nature and creating with economy of means—two central tenets that had been evolving since her childhood. Albers’s wife Anni, a textile artist, and the architect Buckminster Fuller were also seminal influences. Fuller would later describe Asawa as “the most gifted, productive, and originally-inspired artist that I have ever known personally.”

In 1947 Asawa went on a community service trip to Toluca, Mexico, where she observed local artisans forming baskets from a mesh of interlocking wire loops. Upon her return to Black Mountain, she first applied this method to make utilitarian pieces such as egg baskets with iron and copper wire. She then began her lifelong journey of transforming this functional technique and modest industrial material into poetic works of art. While also known for her drawing, print making, and civic art initiatives, Asawa is most revered for these transparent looped-wire sculptures.

In 1949 Asawa moved to San Francisco and married the architect Albert Lanier, whom she had met at Black Mountain. She would spend the rest of her life there, developing ever more complicated forms—continuous lobes with spheres filled with smaller woven volumes nested within them, and tied wire sculptures. Untitled (S.027) is an elegant expression of an early experimental form that she described as “open hyperbola forms that penetrate each other.” It was exhibited the year it was made (1954) in a show of four women artists at the San Francisco Museum of Art (now SFMoMA), and Asawa always kept the work in her own possession.

The addition of this sculpture is a huge step toward LACMA’s goal of having the destination collection for California art. Untitled (S.027) will be prominently displayed with other California masterworks in LACMA’s new permanent collection galleries.