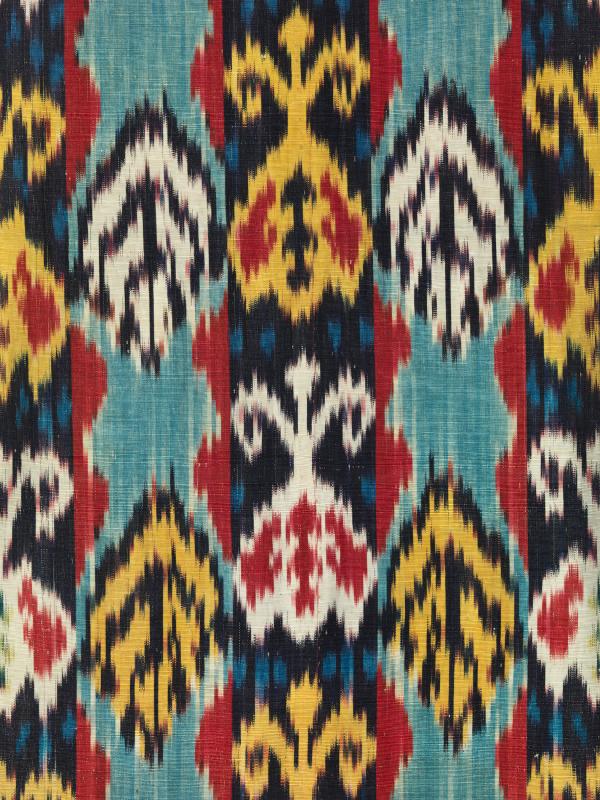 Opening This Week: Power of Pattern

To contemporary viewers, the vibrant patterns of 19th and early 20th century Central Asian ikat textiles are surprisingly modern, composed of motifs that intermingle and morph into one another and in fabrics bursting with color and dynamism. Central Asia encompasses the countries of Kazakhstan, Kyrgyzstan, Tajikistan, Turkmenistan, and Uzbekistan. Nestled between present-day Iran, Afghanistan, India, China, Mongolia, and Russia, this landlocked ecoregion was a center of trade and conquest, and its textiles are rich with patterns influenced by the various civilizations that traveled through or settled along the historic Silk Road. 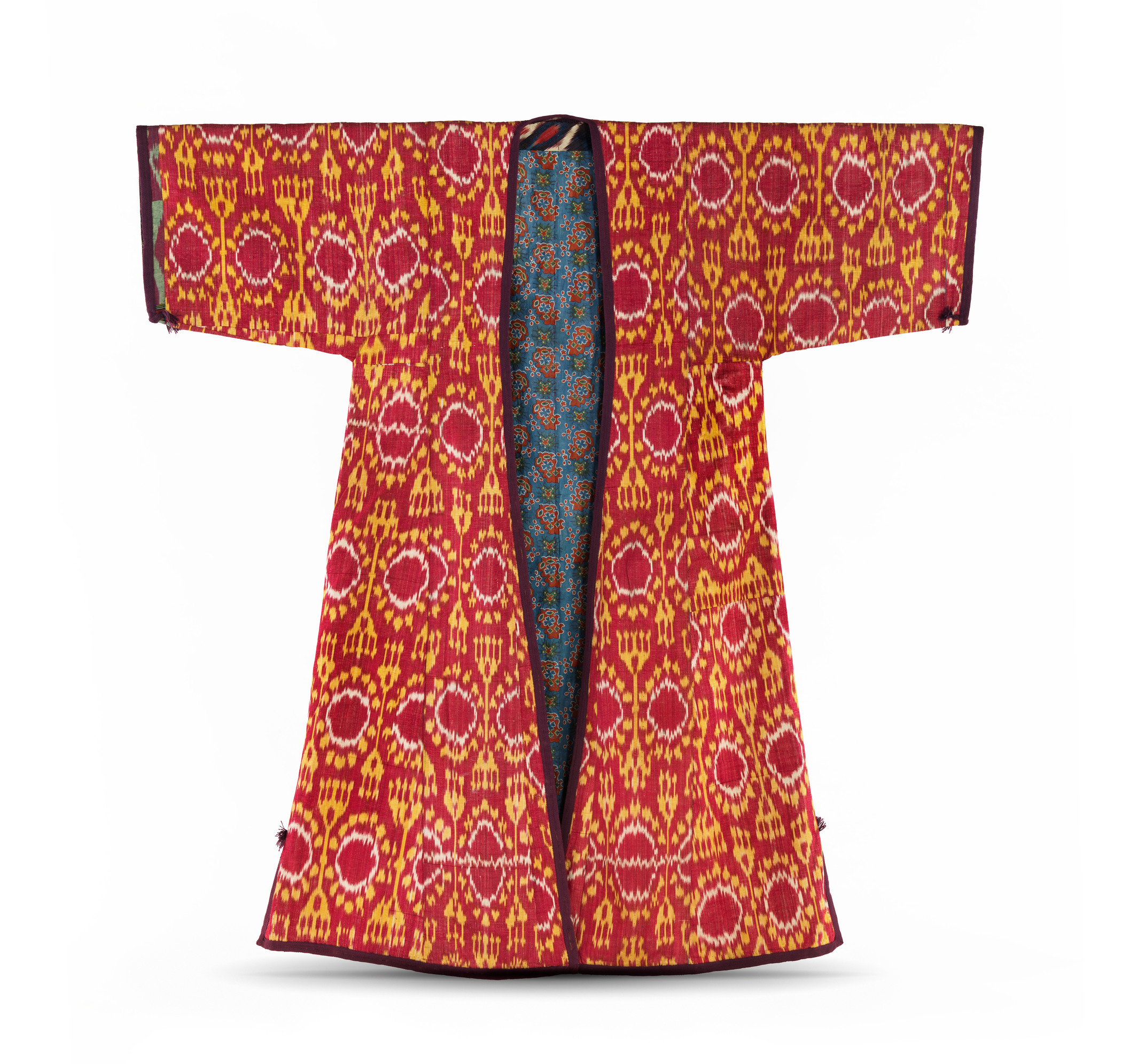 These textiles, which range from distilled and two-toned to complex and multicolored, cohesively blend the use of contrast and composition in design, and were made by highly specialized artisans who created these patterns using the ikat technique. Ikat is an ancient method of decorating cloth that has been produced independently by societies all over the globe. In this method, the patterns are dyed into threads before the fabric is woven. This complex and time-consuming resist-dye technique is achieved by tightly binding predetermined sections of threads to resist the saturation of color when submerged into dye baths.

In recent decades, "ikat"—a shortened form of the word mengikat, Malay for "to tie" or "to bind"—has become the general term for these textiles. In Uzbekistan, the word abrbandi (abr meaning "cloud" and bandi meaning "to bind") is used—a poetic reference to the cloud-like, blurred effect created when the pre-dyed yarns are woven and a slight misalignment of the dyed sections of threads occurs. This desired look is heightened when the threads are repeatedly rebound and resist-dyed, creating shapes and patterns with multiple colors. 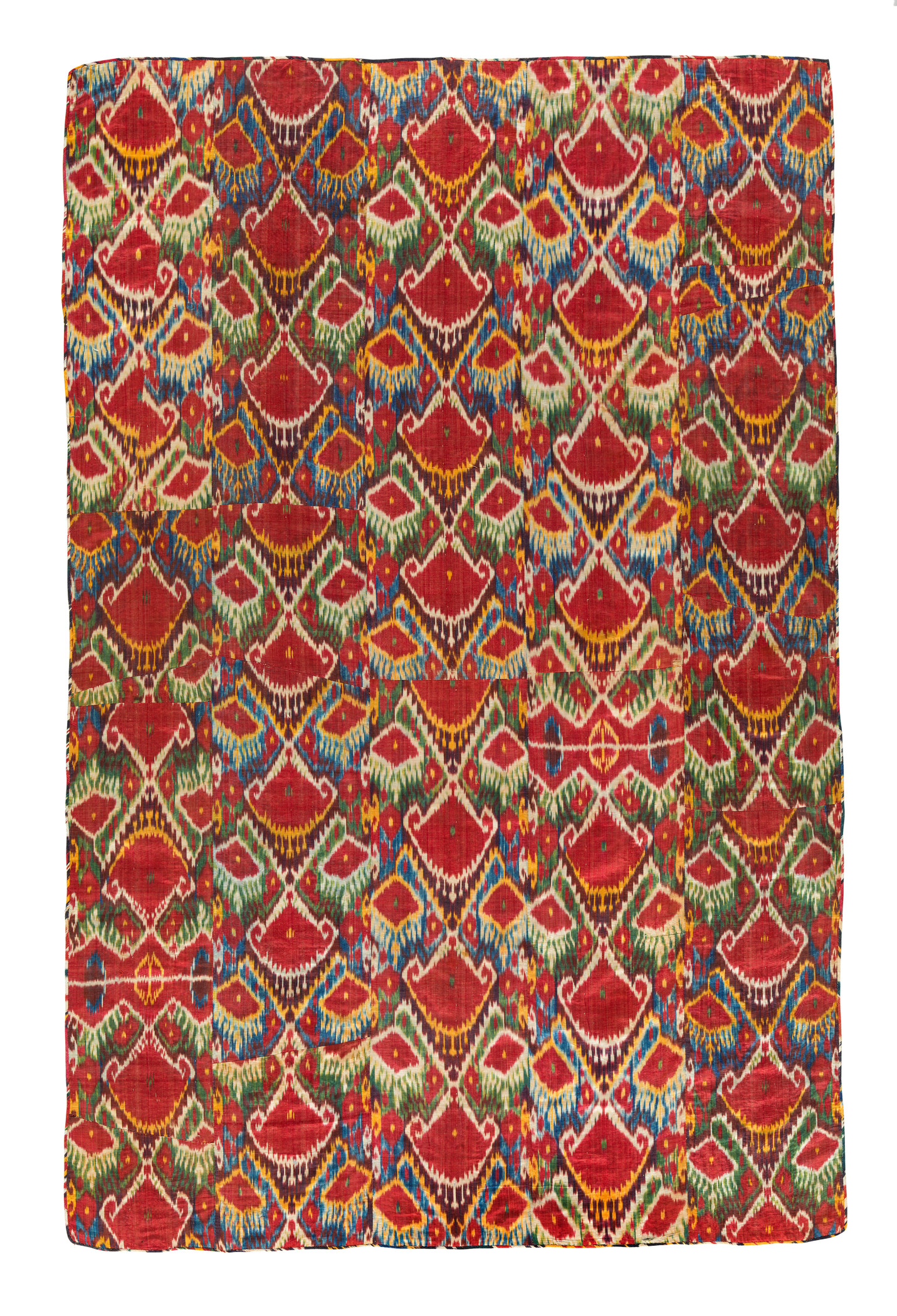 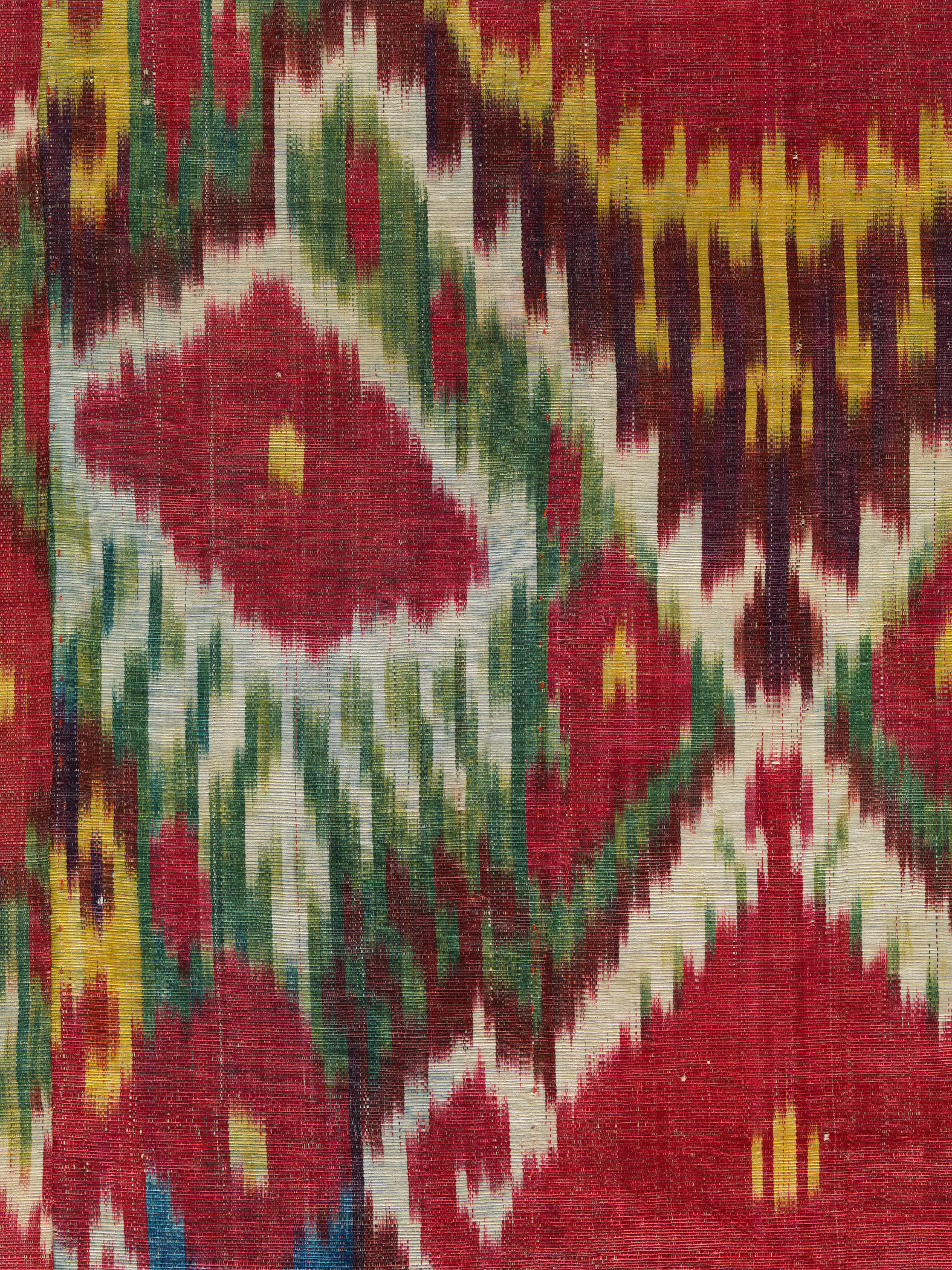 The alluring quality of Central Asian ikats in particular lies in their bold juxtaposition of colors, rendered into designs with both ancient and nomadic origins. Some patterns are composed of many small motifs, and in others the motifs are strikingly large and bold. They could be configured diagonally, in chevrons, bilaterally mirrored, or against vertical stripes. Some graphic elements—such as a pomegranate, comb, vase, almond, cypress tree, or ramʼs horn—are identifiable, while others are indecipherable, as the motifs seem to have commingled and transformed into something new. 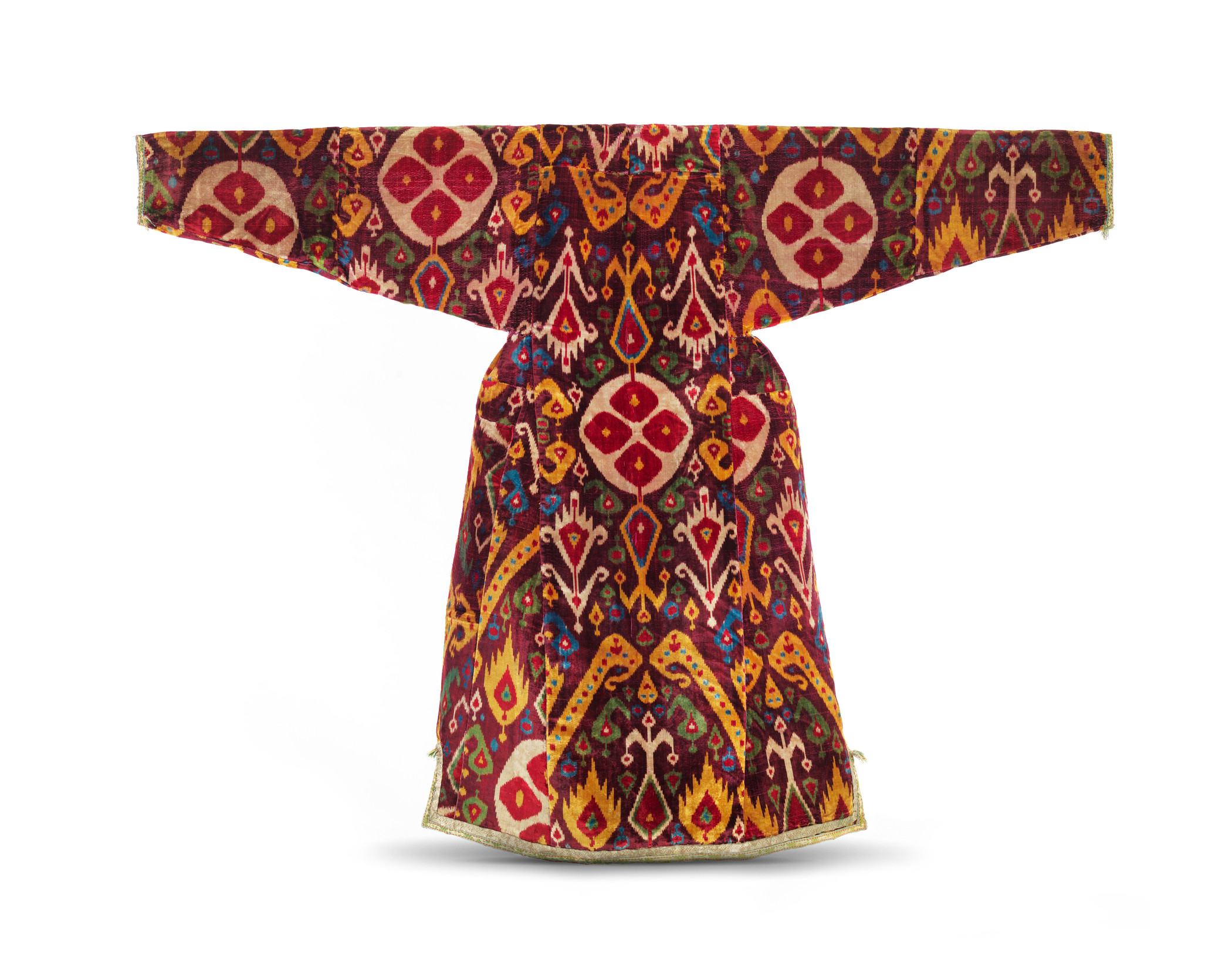 In Central Asia only the warps (vertical threads in a weave) were bound for ikat dyeing, and were always made of silk. The warp threads were woven into a number of styles that enhanced the visual and tactile texture of the ikats, including silk and cotton plain-weave failles or all-silk plain weaves, satins, and velvets. When worn on the body or decorating the home, these luxury fabrics resonated against Central Asiaʼs steppe and desert landscapes, functioning as beacons of kaleidoscopic color and pattern that reflected the wealth and sophistication of its patrons. 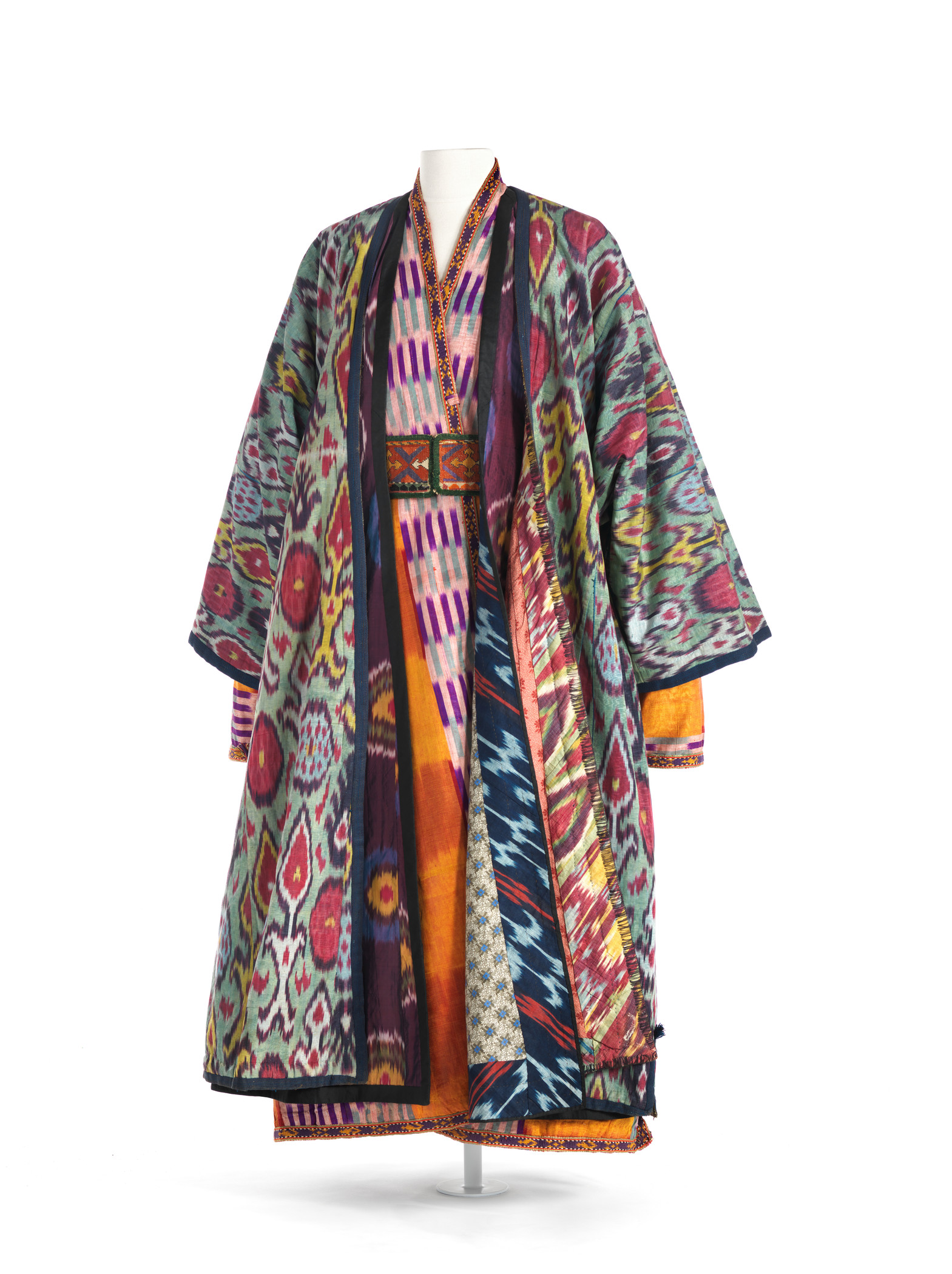 Power of Pattern: Central Asian Ikats from the David and Elizabeth Reisbord Collection, on view February 3–July 28, 2019, presents a comprehensive group of Central Asian ikat textiles generously donated by Dr. David Reisbord and Mrs. Elizabeth Bloom Reisbord. This extraordinary collection of robes and wall hangings are organized by motif to highlight the artistry and creative improvisation of ikat makers who drew upon the shapes that surrounded them in everyday life to create such dynamic patterns. By isolating these shapes, the exhibition encourages the viewer to observe how motifs were reinterpreted through color, form, orientation, and scale to create textiles truly unique to the region.

Power of Pattern is on view in the Resnick Pavilion from February 3 through July 28, 2019. Member Previews are January 31–February 2. Not a member? Join now!