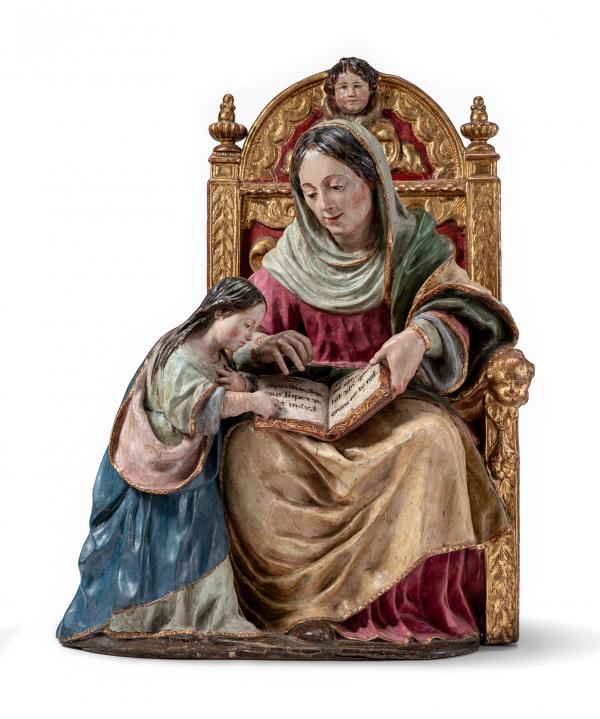 New Acquisition: Luisa Roldán's "The Education of the Virgin"

This painted wood sculpture depicts the elder St. Anne tenderly teaching her young daughter, the Virgin Mary, to read scripture. With the bible turned toward the deeply engaged child, the scene illustrates Mary’s early commitment to religious study. The intimate composition, created in the early 1680s, is also a focused portrayal of female intellect, and more specifically, of female literacy, a rare attribute reserved for only a small fraction of the population at the time. The familial transmission of knowledge, however, was not unusual, nor an exception for the eminent Luisa Roldán, the most significant female sculptor of 17th-century Spain.

Born in Seville in 1652, Roldán apprenticed with her father, the highly successful sculptor Pedro Roldán. In his workshop, which trained many other sculptors and painters, possibly including Roldán’s future husband, Luis Antonio de los Arcos, Roldán excelled in wood carving. Gradually moving away from the severe sentiment expressed in most 17th-century Spanish sculpture, Roldán was interested in putting forth a more sensitive approach to subject matter, as embodied in this work.

In an exceptional move after she left her father’s workshop, Roldán started her own business. She fielded commissions from churches, confraternities, and private owners, with her husband assisting on the business side and her brother-in-law becoming her preferred painter. In the first decade of her independent career—the period in which she created The Education of the Virgin—Roldán worked in or near Seville and Cádiz. In 1688, the Sevillan native moved to Madrid under the spell of the Spanish court. It was there, in 1692 under King Charles II, where Roldán became the first female court sculptor to the king. Roldán’s unprecedented designation of “Escultora de Cámara” continued through the next monarch, Philip V, and remained with her until her death at age 53. In the Spanish court she continued to work on monumental wood polychrome sculpture, as well as smaller, multi-figured, painted terracottas.

The Education of the Virgin demonstrates an artistic virtuosity similar to that of Roldán’s other work in wood. The subject matter is at once charming and grave, its compositional strength insisting on the significance of St. Anne’s efforts and the young Mary’s dedication toward her education. The idealized beauty of the figures is enlivened by Roldán’s pronounced focus on their physical presence, seen in the voluminous garments as both women lean toward one another, and in particular, in the impression of St. Anne’s weight on the cushion of her throne. The elder’s gaze and delicate fingers direct Mary’s teaching toward the words in Luke 1:35 painted clearly on the book, which announce her future as the mother of Christ.

This acqusition is an important addition to LACMA's already strong collection of Spanish polychrome.