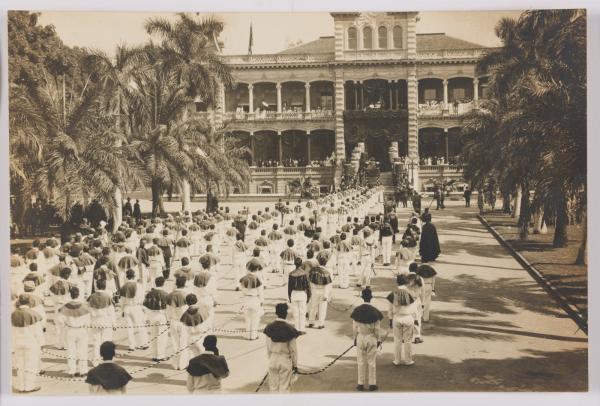 LACMA’s Mark and Carolyn Blackburn Collection of Photography is a gem that encompasses over 9,700 rare Oceanic objects. Among these objects are surf icon Duke Kahananmoku’s wooden surfboard, a 1914 book by A. R. Gurrey widely regarded as the first about surfing, ephemera, postcards, lantern slides, cabinet cards, and thousands of photographs of Oceanic nations. Some of the nations represented in this collection are Hawaiʻi, Samoa, Aoeteroa (New Zealand), Tonga, Fiji, Tahiti, Rapa Nui (Easter Island), Society Islands, Cook Islands, New Caledonia, Australia, Marquesas Islands, Solomon Islands, and Philippines to name a few. The Collection is extensive and includes historic photographs spanning from 1840 to 2016. Some of the photographs of 1800s Fijian life are part of the exhibition Fiji: Art & Life in the Pacific, along with over 280 artworks including kava bowls, breastplates of pearl shell and whale ivory, kapa/tapa/siapo/masi, bure kalou (Fijian spirit houses or small portable temples), weapons, and a Fijian wooden double-hulled sailing canoe called a drua.

The Blackburn Collection is brimming with rare photographs, like carte-de-visites of Hawaiian royalty, and historically significant places such as the old ʻIolani Palace and Kawaiahaʻo Church, suitable for exhibition and the education of students, scholars, and the general public. The current ʻIolani Palace was built in 1879 by King David Kalākaua, influenced by his European travels and continues to be one of the only two palaces in the United States, the other being Hawaiian as well—Hulihe'e Palace on Hawaii Island in Kailua-Kona. The old ʻIolani Palace was built before 1845 by the Governor of Oʻahu, Kekūanāoʻa, and called Hale Aliʻi (House of the Chiefs). It was built in the traditional aliʻi (nobility) style with only ceremonial spaces and without bedrooms. Although there are many photos of todayʻs palace, there are very few photos of the old ʻIolani Palace available. Kawaiahaʻo Church in Honolulu, Oʻahu is another significant building in Hawaiʻi. Constructed between 1836 and 1842 in the neoclassical Mediterranean revival style, it was commissioned by Queen Kaʻahumanu and became the church where members of the Kamehameha and Kalākaua dynasties were baptized, buried, and crowned during their coronations. These photos are just a micro-sample of the richness found in the Collection.

To fully catalog and research the Blackburn Collection, LACMA was awarded a grant from the Institute of Museum and Library Services (IMLS) in 2017. With this grant, LACMA teams in Registration, Collections Management, and Collection Information & Digital Assets (CIDA) have been able to catalog, process, rehouse, and digitize over 9,700 photographs. One major goal of this project is to have the Collection available on a digital platform, accessible to researchers around the world. By having the collection online, and eventually on a content management system, scholars and researchers all over the world will be able to access and reference this important collection for their work. Additionally, participants in this project are creating a Cultural Advisory Committee to counsel LACMA staff on culturally sensitive photos and other pertinent initiatives. This committee will advise and recommend what photos should be restricted from public view and/or repatriated back to their communities. LACMA not only understands the colonial context in which many of these photos were collected, but that collaboration with Indigenous communities is key for respect and building relationships.

Shortly after graduating from UCLA’s American Indian Studies master’s program, I was hired as the Blackburn Research Assistant. My background prepared me for a project of this scope since my graduate school research focused on museum studies and the Native American Graves Protection Act (NAGPRA)—a law that was passed in 1990, requiring federally funded U.S. museums and institutions to return Native American ancestors, sacred objects, and objects of cultural patrimony back to their respective tribes. One of the many reasons I was excited about working at LACMA is because by conducting this project, LACMA acknowledges the complex history of collecting and museums as intricately linked to colonialism and the oppression of non-White people. With the inception of early European museums, like cabinets of curiosities and human zoos in the 1600s, non-White people have been treated as subjects, specimens, and objects to be studied and collected. By supporting this research project, IMLS and LACMA are changing the narrative of colonialism and museums. This project is an example for other museums with Native and Indigenous collections that are grappling with these difficult issues and considering Native voice and agency.

As a research assistant I have the exciting (yet daunting) task of researching over 9,700 photographs while updating metadata on LACMA’s collection management software The Museum System (TMS), and on LACMA’s digital asset management system ODIN. I am also working closely with our research consultant, UCLA American Indian Studies Center librarian Joy Holland, who has a background in working with Hawaiʻi and Pacific collections. When researching a photograph, the first thing I try to confirm is the year the photo was taken. The year, or period, reveals the context in which the photo was taken, essential for understanding the work’s importance. For example, New England Christian missionaries first arrived in Hawaiʻi in 1820 aboard the ship Thaddeus. In addition to promoting Christianity, missionaries prohibited the worship of Hawaiian gods, hula dancing, and traditional Hawaiian clothing. So if a photo is dated 1865 and it depicts a topless hula dancer, one can infer that 1) the hula dancer was probably asked to pose in this way 2) the photographer may have wanted to promote the sexualization of Hawaiian women, something popular in the late 1800s. Some of the questions I ask when looking at a photo are:

I’m also interested in revealing the power dynamic of the photograph. Whose culture is being documented? Why? And by whom? Through my curatorial research process I hope to reveal new narratives that have been overlooked by previous researchers.

Another important aspect of this collection research is language. Language is vital to Indigenous communities so I aim to use the accurate terminology. For example, it was decided at the very beginning of my research that I would use the correct Hawaiian diacriticals when writing names and place names, like Hoʻōpūloa, Hawaiʻi, lūʻau, or Queen Liliʻuokalani. I also refuse to use the term “subject” when referring to people in photos. These decisions were made in opposition to the colonial museum attitudes that were outlined above. I hope my collection research contributes to the ever-growing field of de-colonial Indigenous histories.

Join us tomorrow to discover highlights from the Blackburn Collection that represent important aspects of Hawaiian history.