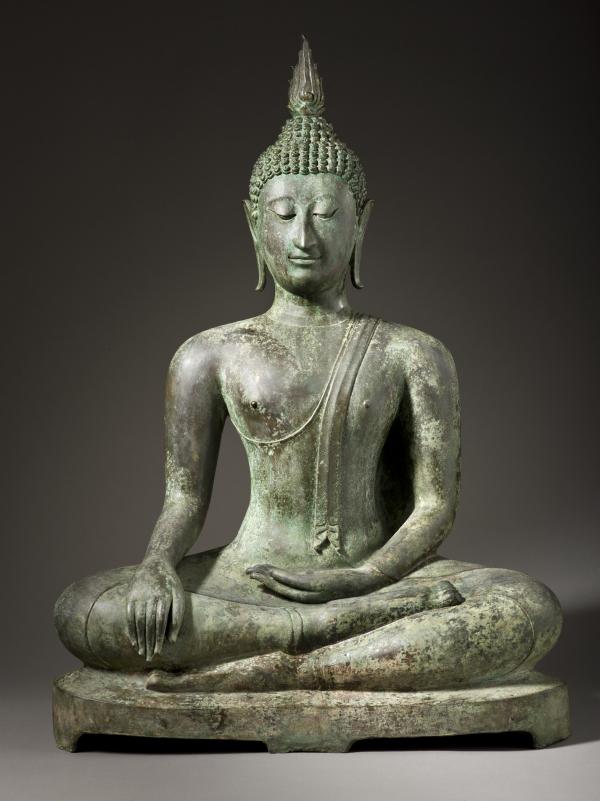 A Visual Dive into Buddha for Beginners

I smile when I hear students' exclamations on my school tours. As a docent at LACMA, I have the opportunity to introduce students to art. When we stop at the Buddha Shakyamuni, there is an instant familiarity. The Buddha image is ubiquitous, especially in L.A. True Religion makes jeans with a Buddha in its logo. He is larger than life on a carwash mural at Western and Beverly, and there are countless versions of Buddhas in restaurants all over town. Many students tell me they have seen him, but don't know much about him.

Similarly, I grew up with a framed Buddha image in my living room, but didn't know much about him. My Vietnamese grandmother would religiously (in the literal sense) sit in front of our home altar, once at 6 am and again at 6 pm, every day, to pray. With hair pulled back into a bun and perfect posture, she was a reflection of the Buddha. I wish I had asked my grandma more about her practice, but it was the 1980s and I was a teen in L.A., more interested in shopping malls than Mahayana Buddhism. It wasn't until a visit to LACMA that my interest was sparked. I thought that if artwork from my culture was important enough to be displayed in a gallery, then I must learn more!

While the pandemic has kept us out of the galleries, we can still enjoy LACMA’s world-class art from home. I'm sure you have seen Buddhas all over town, but I invite you to be a kid again, to look with fresh, young eyes. Imagine this as a gallery walkthrough, with no gallery and no walking required. This can be an activity for the whole family—a visual dive into Buddha for beginners.

As a docent, I always begin by asking my audience to take two minutes to carefully look at the object. I say the more you look, the more you'll see. Zoom in.

Take your time and read on when you’re ready...

In the galleries, I would wait to hear my viewers' responses and drop in information when relevant. 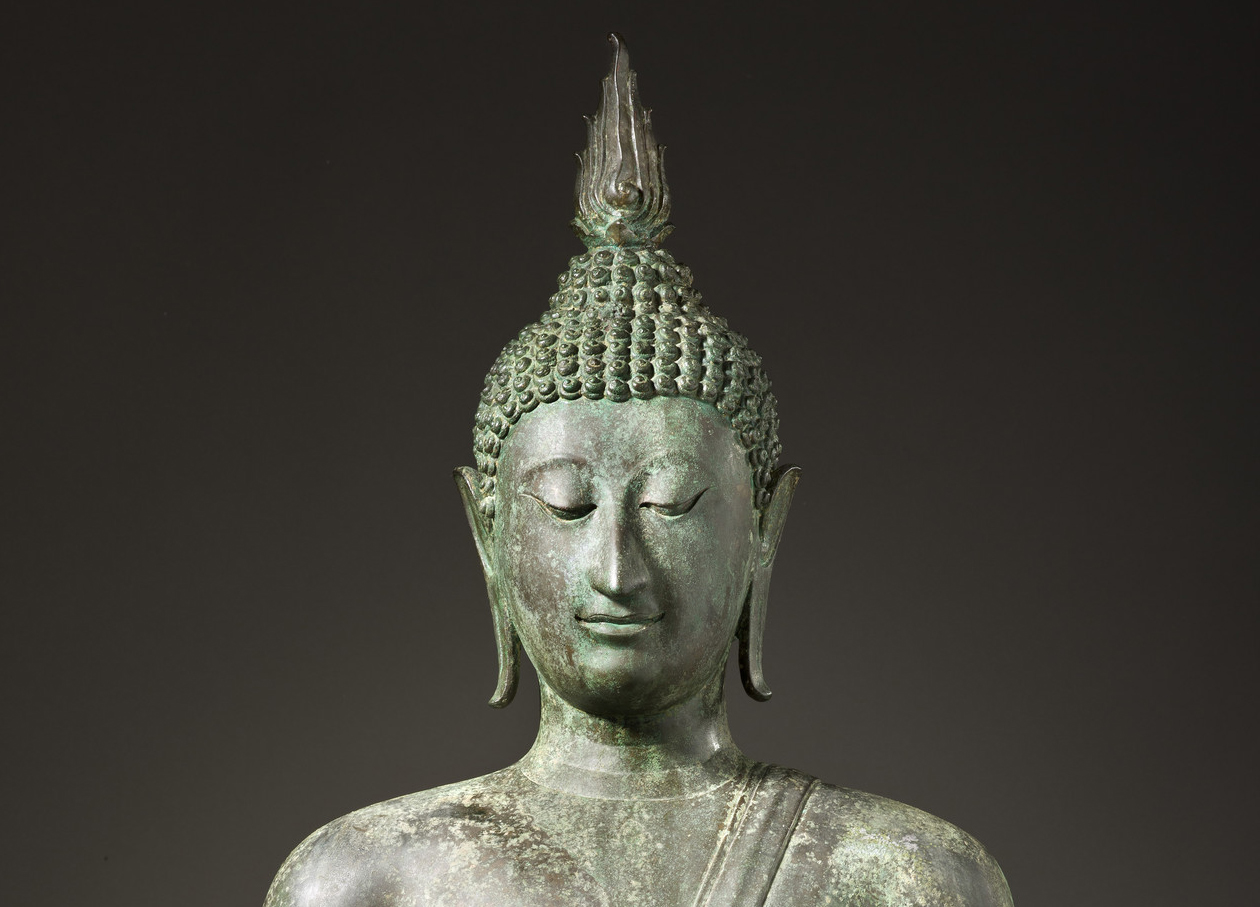 Perhaps you noticed the extra long ears? There is an explanation for them. Buddha translates to "enlightened one" or "awakened one." There are many Buddhas, but he is the historical Buddha Shakyamuni who started it all. Historians say that he was born Siddhartha Gautama, a prince who lived in India 2,500 years ago. He gave up his privileged life at the palace in search of a way to end the human suffering he saw in the world. His elongated earlobes are a reminder of the heavy earrings he once wore, and the lavish lifestyle he left behind. As Buddha’s teachings became the foundation for the Buddhist religion, some say his long ears help him hear our prayers. That’s a pretty cool superpower!

How is Buddha the "awakened one" if his eyes look so sleepy? Buddha is meditating, freeing his mind of clutter. His eyes are downcast to help block out distractions. The original Buddha meditated under a Bodhi tree for 40 days until he achieved enlightenment. This is the "awakening" that allowed him to see things as they truly are. He now understands how to break the cycle of misery and end suffering in the world. 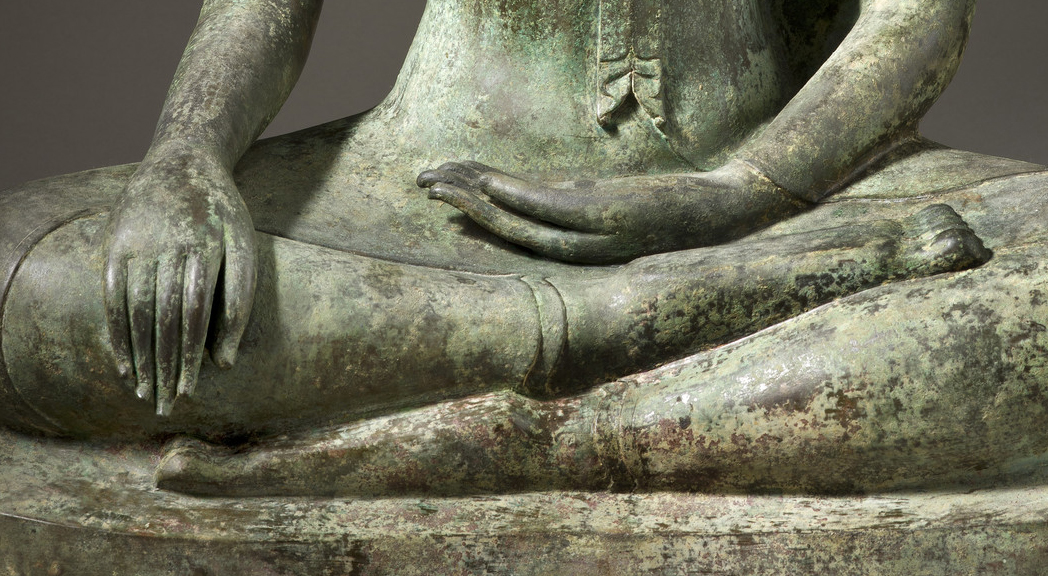 Many observe that the Buddha’s hands are held in a peculiar position. In Buddhism, hand gestures, known as mudras, have special meaning. His left hand is in his lap, palm facing up, indicating that he is deep in meditation. His right hand, draped over the right knee, is in the "earth touching" gesture. This represents the moment Buddha realized his enlightenment and reached down to call the earth to be his witness. What modern day hand gestures do you use? What meanings do they have?

Did you notice the greenish color? That's the verdigris that develops when an object containing copper reacts with the elements over time. This sculpture has aged very well given it's around 700 years old. The Statue of Liberty, albeit much younger at 134 years old, has developed more verdigris because she lives outdoors. Where else have you seen this verdigris? (Old copper pennies, pipes, or roofs?)

The Buddha is wearing a monk's robe that is wrapped around his body and draped over his left shoulder, ending in a neat, decorative fold. The fabric covers his left arm and extends to just below the knees. His right arm and chest remain bare. If you look carefully, you will see details near his ankles. What appear to be leggings is actually the long, wrapped undergarments monks wore under their robes.

Why do his clothes look see-through? As the Buddha has reached enlightenment, his body is glowing, exuding wisdom and compassion. Just as a handkerchief would look transparent over a bright light bulb, Buddha's robe appears see-through over his resplendent form.

Did you notice the bump on the Buddha's head? Turns out it's not a man bun as I had once thought. It's called the ushnisha and represents his expanded wisdom. Buddha has gained so much knowledge in his mind that a cranial bump grew on top of his head to contain it. The flame at the very top represents the moment that Buddha gained enlightenment. What are some modern day symbols for intelligence or a good idea? (Maybe a light bulb above the head, or a lightning bolt?) How are these similar to the symbols for wisdom found on this Buddha?

Buddha is often called The Great Teacher, as his teachings have reached millions around the world. Sculptures like these are often found in Buddhist temples and are helpful didactic tools. With research, you might be able to parse out the many different types of Buddhas displayed around town. There is much to gain when we take the time to look closely, investigate, and work out our own interpretations.

Did you try the Buddha's pose? Especially during this pandemic, meditation is a helpful tool to calm our bodies and minds. Like many of you, I've religiously (in the figurative sense) turned to YouTube yoga every morning during lockdown. I've found it to be awakening and restorative. At the end of each session, I'll gather up my legs, straighten my back, rest my eyes and hands, and assume the meditative pose. I'm channeling both my beloved grandmother and my favorite work of art.

Twitter
Bring a little creativity to your weekend with at-home art classes! ✏️ 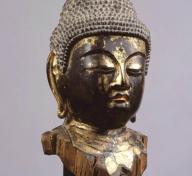 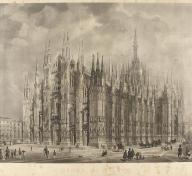 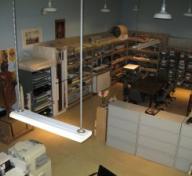 Behind the Scenes: South and Southeast Asian Art Department
May 19, 2009