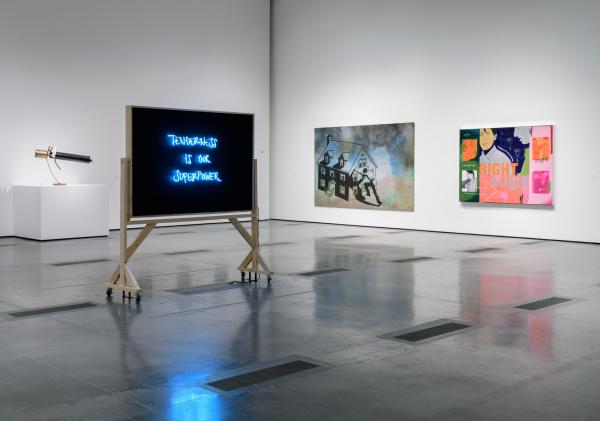 The exhibition View from Here: Recent Acquisitions came about in response to our current cultural moment. The coronavirus pandemic; Black Lives Matter and the country's racial reckoning; the increase of immigration detention centers—all things we are taking in and absorbing largely from home (for those of us who are lucky to have homes). View from Here frames artworks that have been entering LACMA's collection in relationship to the state we are living in today.

Drawn predominantly from Contemporary Art but also from Modern Art and the Wallis Annenberg Photography Department, many of the works in the show have a sense of speaking to history, to the politics of the moment, and to different framings of identity. There are works that queer or decenter the art history that we've received in standardized textbooks, as well as works that figure or deal with domestic spaces, which have taken on new meaning for so many of us. Installed during the museum's closure, this exhibition encouraged us to think creatively about how to reach our audience, and, since September, we have been hosting popular lunchtime virtual programs with artists featured in the show discussing their practices in wide-ranging, intimate conversations with curators. 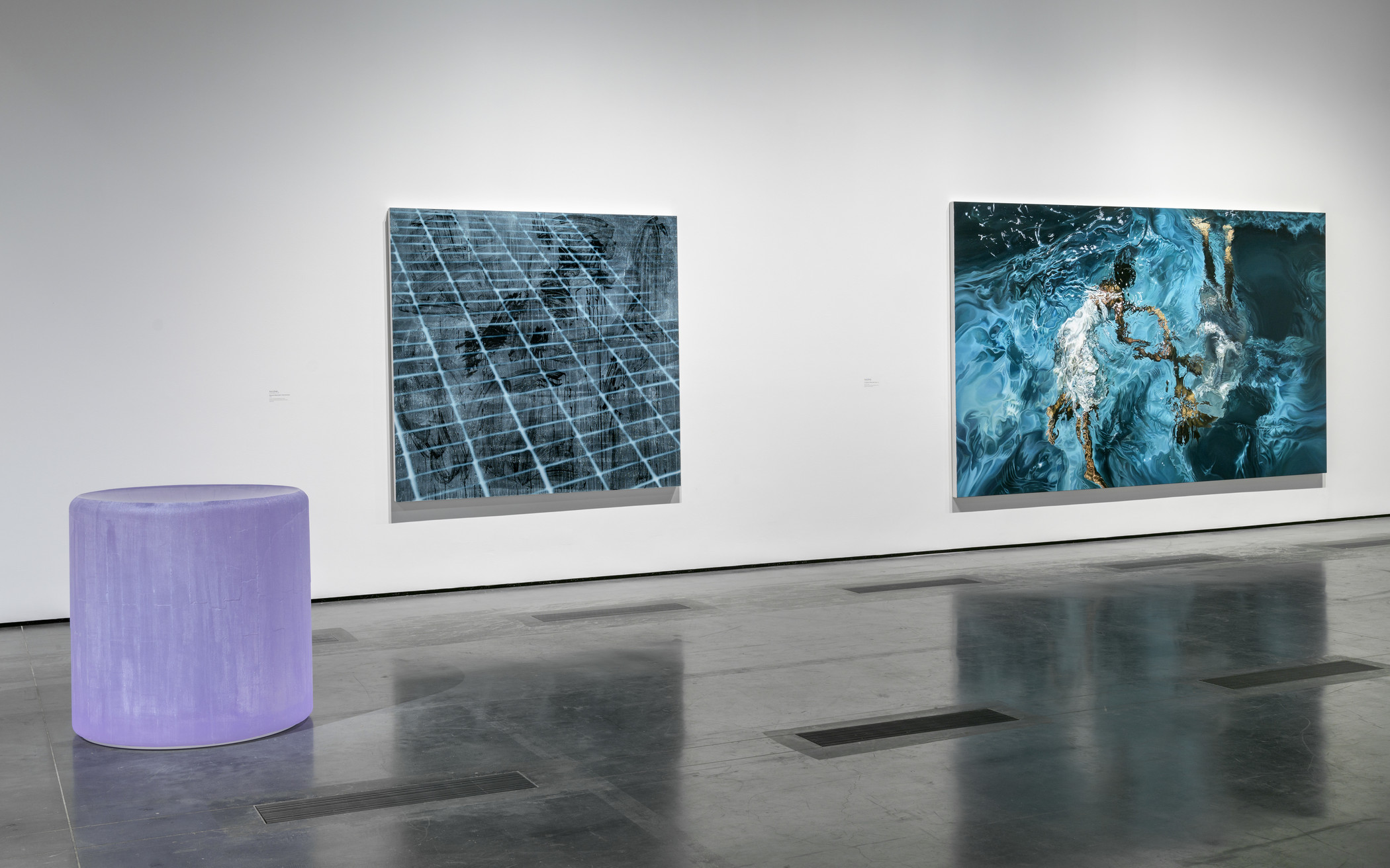 LACMA is profoundly grateful to those who made it possible to share these beautiful and timely works with the public, including the members of AHAN: Art Here and Now, Contemporary @ LACMA, and Collectors Committee. These acquisitions not only highlight how we have been diversifying and globalizing the collection across departments; they also presented an opportunity to realign the ways in which young artists of color are incorporated into a museum exhibition—to center them and put them in conversation with globally recognized artists like Roni Horn and, belatedly, Betye Saar. 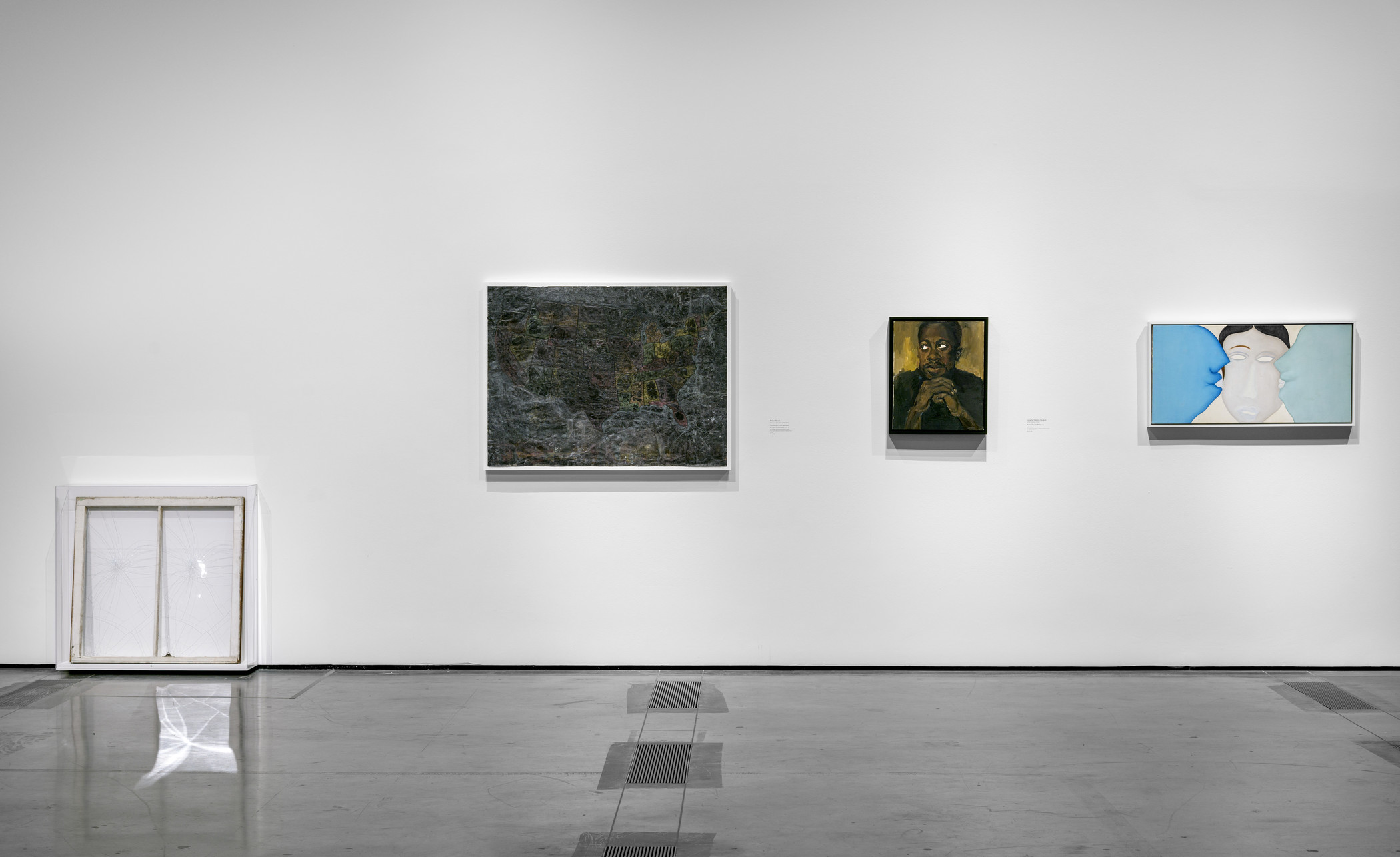 The exhibition takes its title from a series of photographs by Christina Fernandez, three of which appear in the show. A Los Angeles native, Fernandez shot the photos at various locations in the southwestern U.S., including the desert museum of artist Noah Purifoy (the subject of a major 2015 exhibition at LACMA, Noah Purifoy: Junk Dada). Fernandez's photograph presents an obscured view of the outdoor museum's landscape, captured from the interior of one of Purifoy's assemblages—a withholding view, and one that resonates deeply in a time of "sheltering in place." 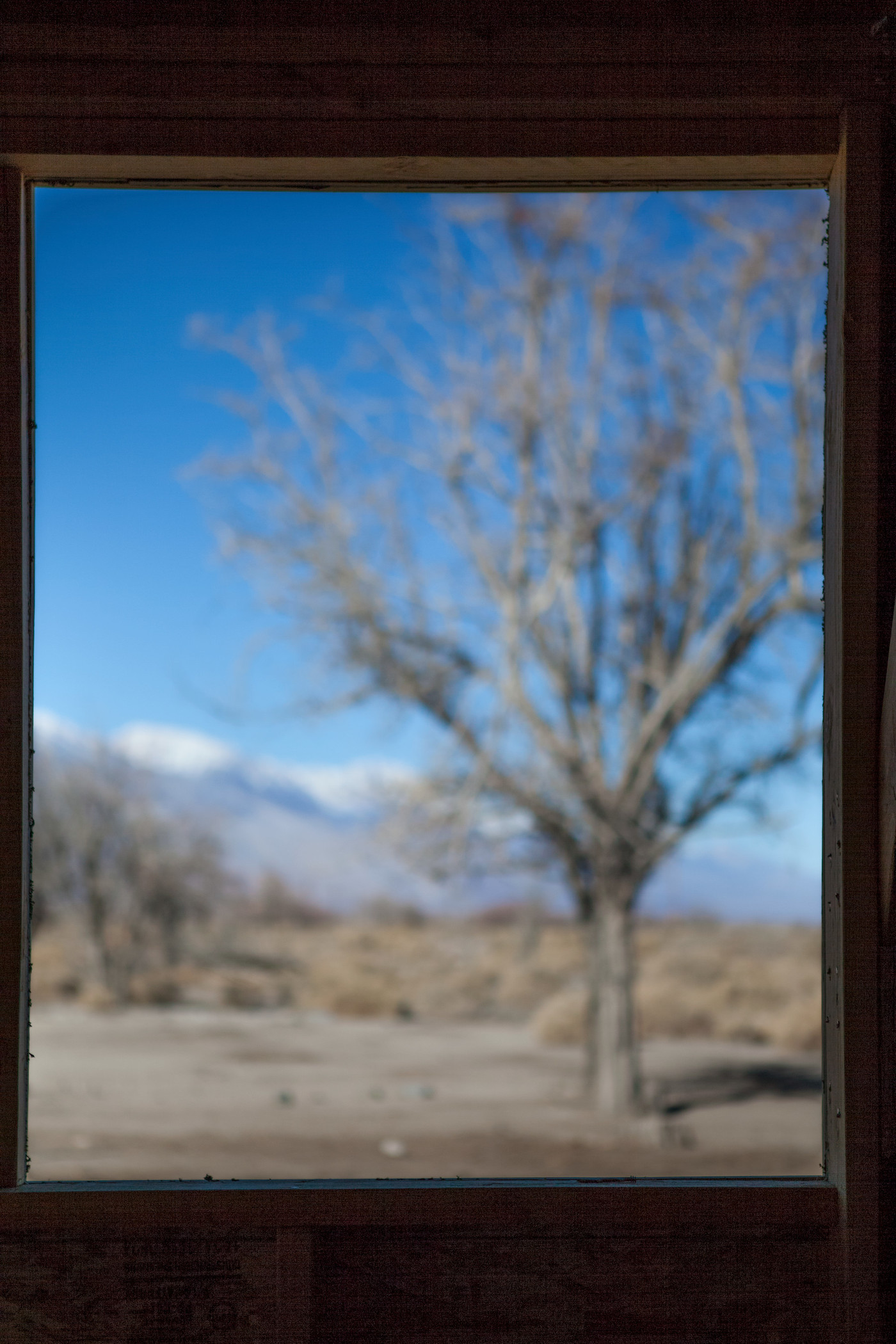 Another of Fernandez's photographs, Toyo (Manzanar), was shot at the internment camp at Manzanar, California. "Toyo" refers to the Japanese American photographer Toyo Miyatake, who was interned at Manzanar and photographed other prisoners there. This subdued and contemplative landscape photograph thus has the register of those who were there before, and is particularly poignant amid the recently invigorated movements to address the detention of immigrants and mass incarceration throughout the country. 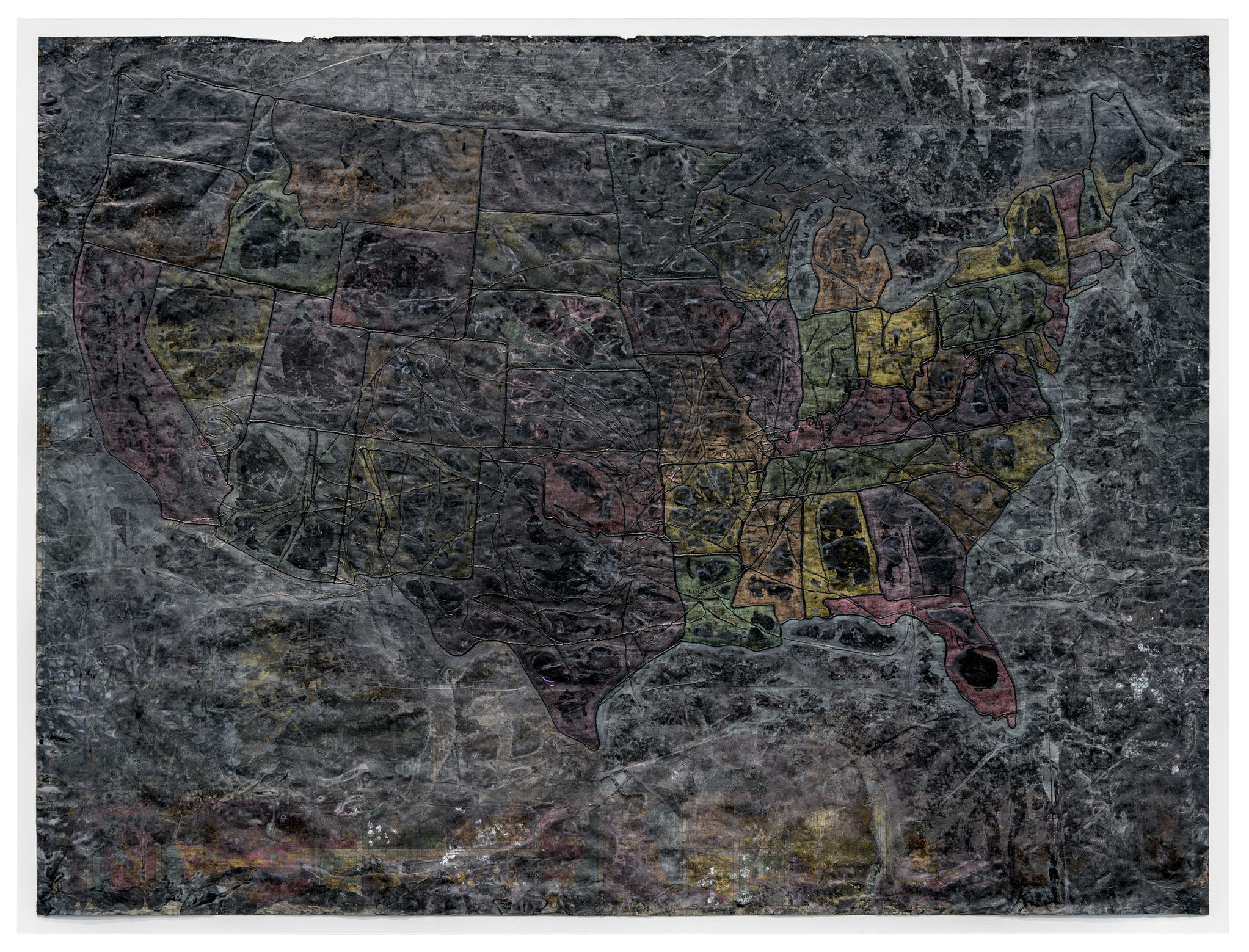 Felipe Baeza, a New York-based artist born in Mexico, pushes the limits of printmaking in a work informed by his experience as an undocumented, queer immigrant. Untitled (so much darkness, so much brownness) began with a hand-embroidered image of a family crossing the Mexico–United States border, onto which Baeza added collage elements and multiple layers of pigments in a repetitious practice that emphasizes labor and process. According to the artist, this work deals with issues of concealing and revealing in relation to his own uncertain status, and the difficulties of revealing oneself. 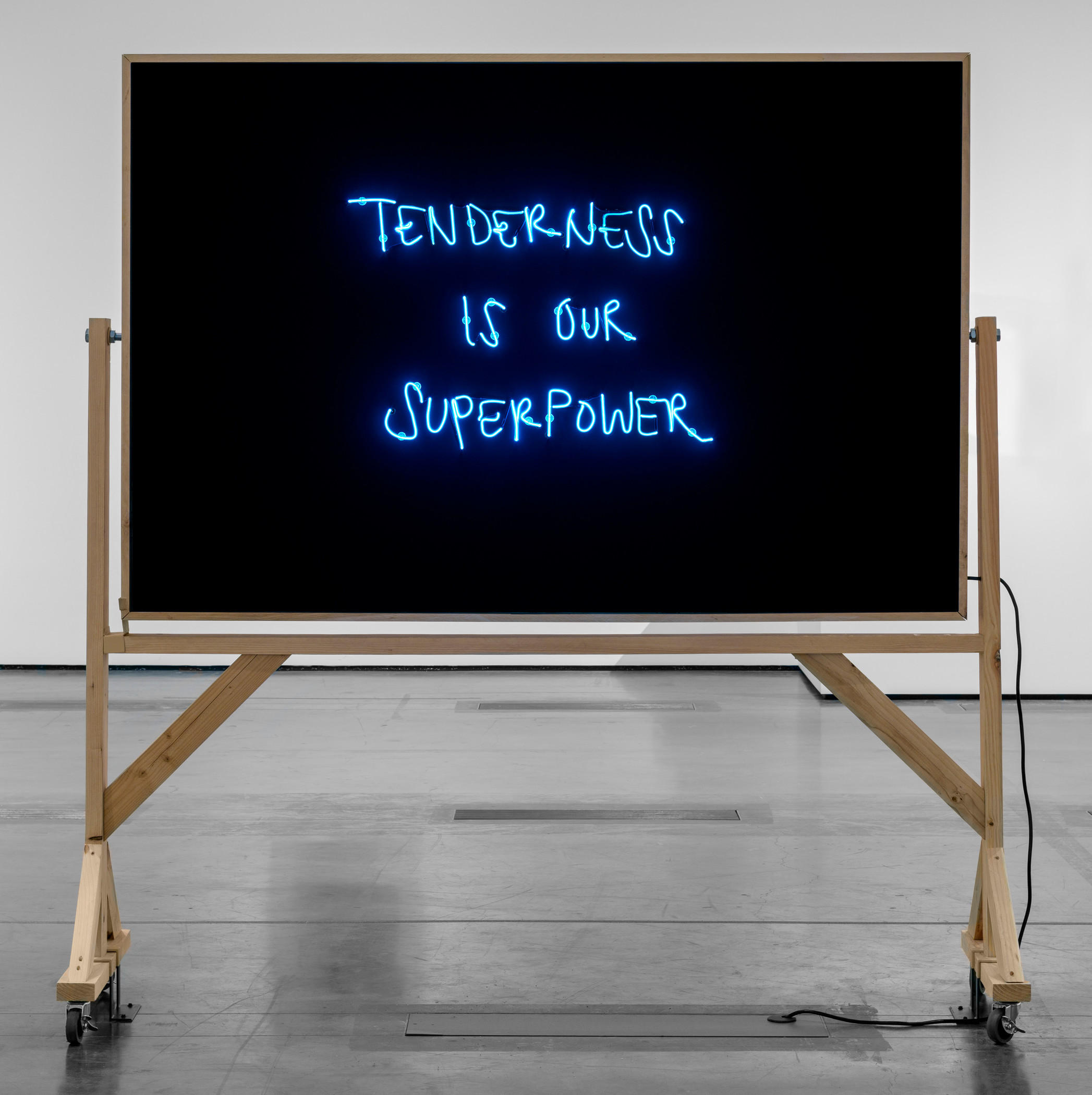 Many of the young artists featured in the exhibition draw on their identities and lived experiences in their work. L.A.-based artist EJ Hill, known for his endurance performances, highlights his experience as a Black queer man and the tremendous resilience that is demanded of Black and Brown bodies by placing himself in spaces where he has never felt comfortable. Hill also creates sculptural objects, and has used neon to place text into conversation with his body as he performs. Lesson #3, part of a series that dissects the chalkboard as a one-way transmitter of knowledge, declares "Tenderness is our superpower." According to the artist, the refrain is one that he wishes had been a part of his education—a contemplation on how institutions could have treated him and other underrepresented students in higher education. 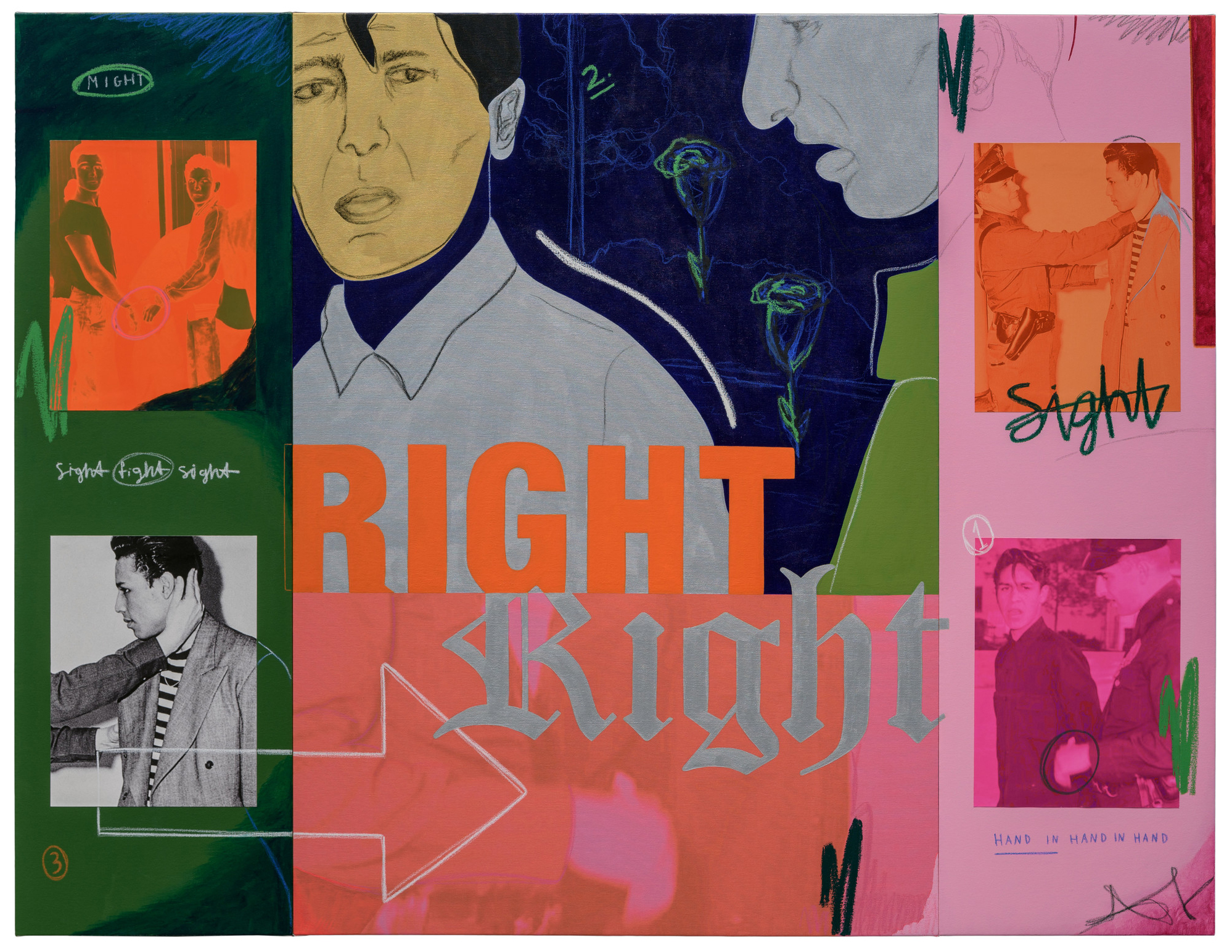 Gabriella Sanchez references her dual Mexican American identity and Los Angeles upbringing in mixed media paintings embedded with text, graphics, and photographs. Her use of graphics and typography makes her background as a graphic designer evident, and connects her work to that of other L.A. artists with a relationship to graphic design, from Ed Ruscha to Barbara Kruger to John Baldessari. Sanchez's painting Down is Up utilizes an archival photo of a man being arrested in connection with the Zoot Suit Riots in 1943. The repetition of the image produces multiple focal points, signaling Sanchez's interest in the different ways images can be deployed, as well as the history of photography and how people of color have been represented in spaces like the media. 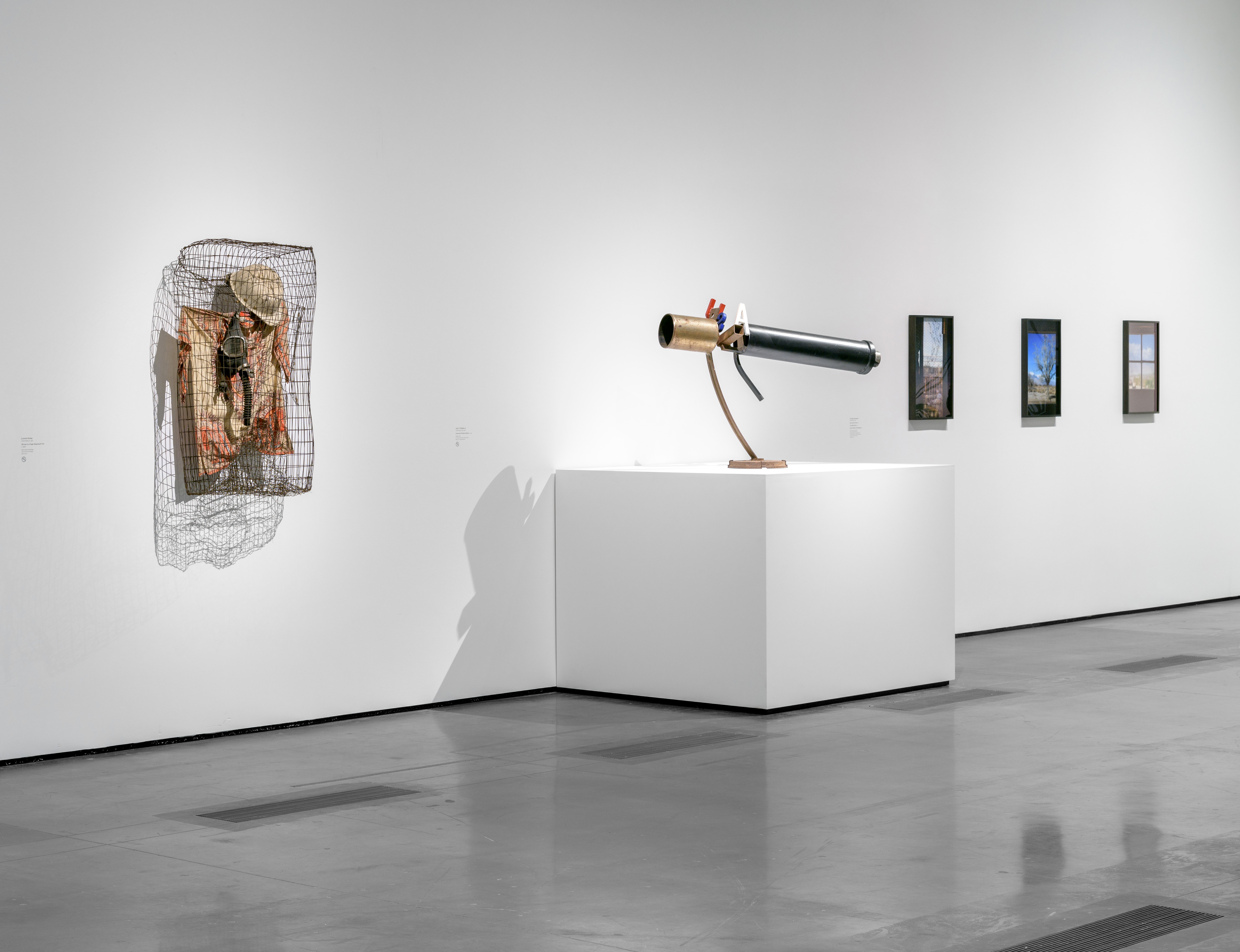 2020 has been marked by our society's powerful response to such media images, particularly videos of police violence against people of color, which have catalyzed a historic movement for social justice. America's Problem Solver, a sculptural assemblage by the L.A. artist John T. Riddle, resonates powerfully in this sociopolitical environment. Like his mentor Noah Purifoy, Riddle was deeply affected by the Watts Rebellion, and began welding assemblages from the torched debris he found in the neighborhood then known as South Central. Created during the time of the Vietnam War, the work evokes both a weapon and a telescope, suggesting that not only did the United States have other countries in its sights but also that the country itself was under scrutiny. In our current context, the work also takes on a sense of the weaponization of patriotism.

Riddle's work, which has only recently begun to receive widespread recognition, is presented in relation to an assemblage by Betye Saar—also a Black L.A. artist who creates using found objects, and has garnered critical acclaim late in her seven-decade career. The "pickaninny" figure Saar used in Domestic Life is one of the many types of racist caricatures that she repeatedly reclaims in her work. Likewise, the birdcage in which the figure is confined is another motif that recurs frequently in Saar's pieces. 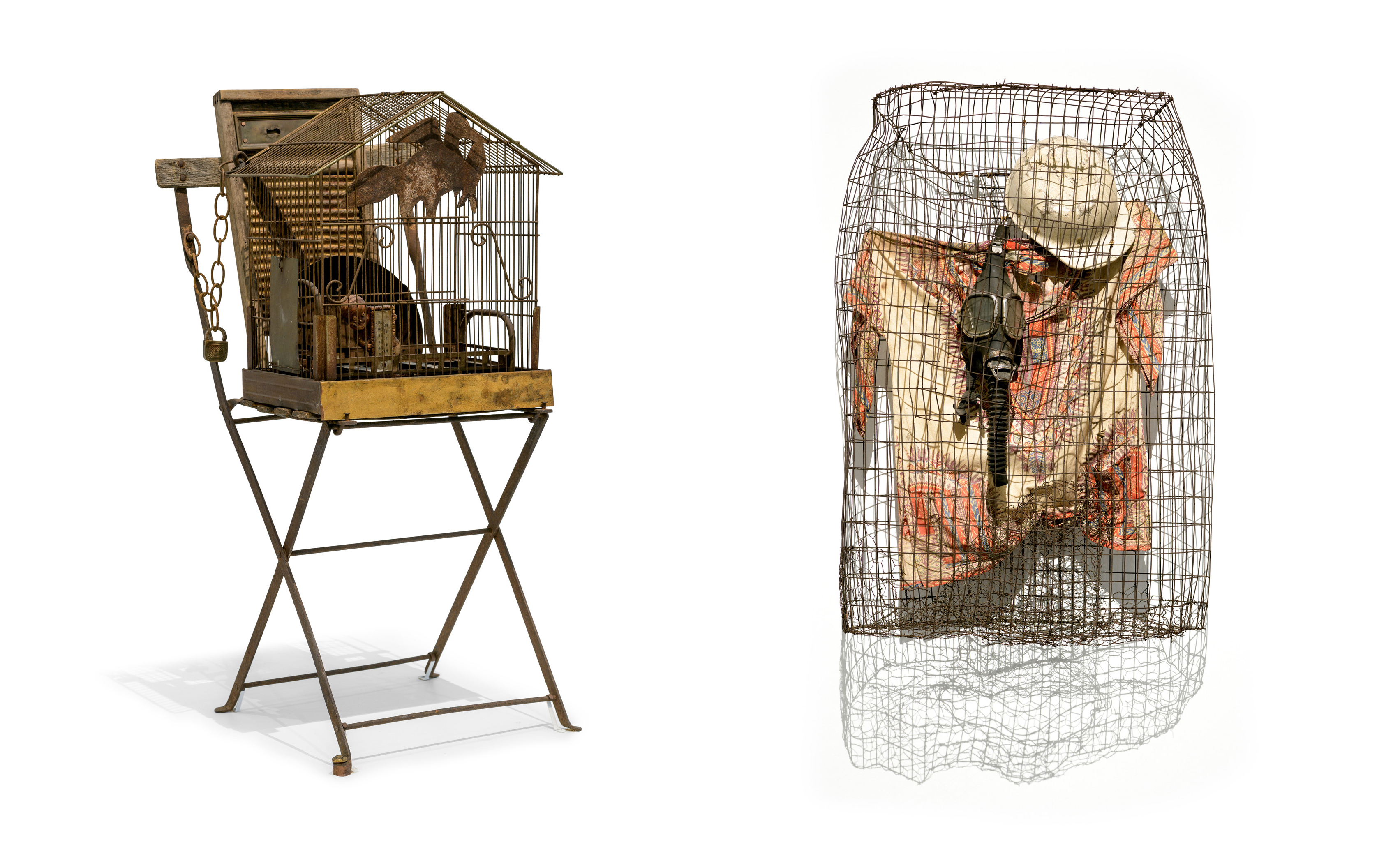 The works by Riddle and Saar are joined by a third assemblage by the self-taught artist and musician Lonnie Holley, whose work was also featured in the 2019 exhibition Outliers and American Vanguard Art at LACMA. Holley's practice encompassed painting and sculptural assemblage made from found objects he collected around his former home in Birmingham, Alabama. Like Saar's assemblage, Holley's African in a Cage Gasping for Air incorporates a cage (fashioned from chicken wire), which encloses a dashiki and a gas mask. Seen today, the cages in Holley's and Saar's work not only address the subjects of slavery and incarceration, but also evoke a sense of enclosure or seclusion relating to the self-isolation imposed by the pandemic. 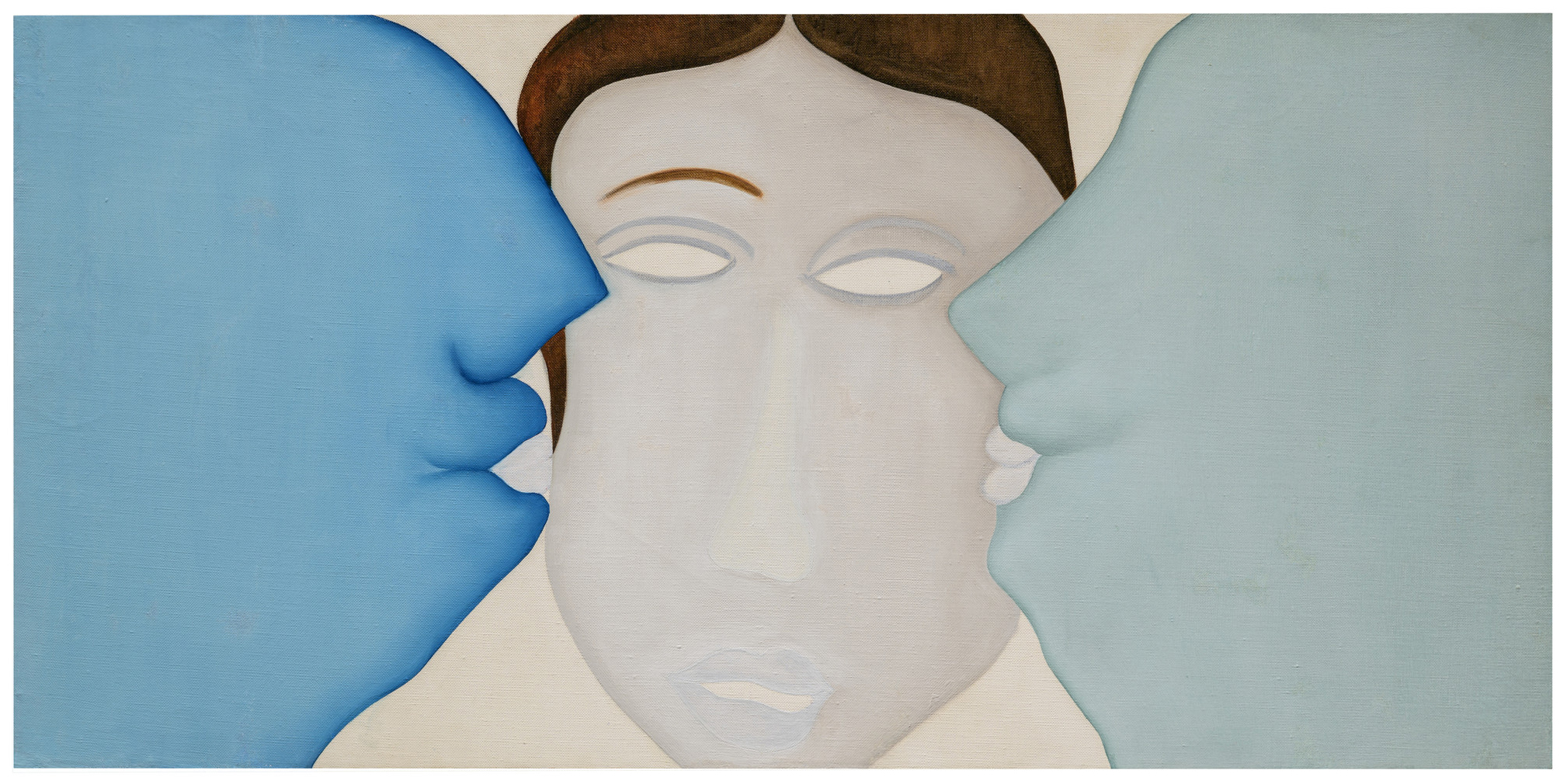 A painting from 1970 by Huguette Caland becomes especially poignant amid our drastically altered social dynamics (or lack thereof). A trailblazing painter and fashion designer who passed away in 2019, Caland began to receive wider support and recognition only toward the end of her life. Huguette with Paul and Mustafa depicts the artist with her husband, Paul Caland, and her lover, Mustafa—a representation of the kind of joy and intimacy so many of us are missing right now. 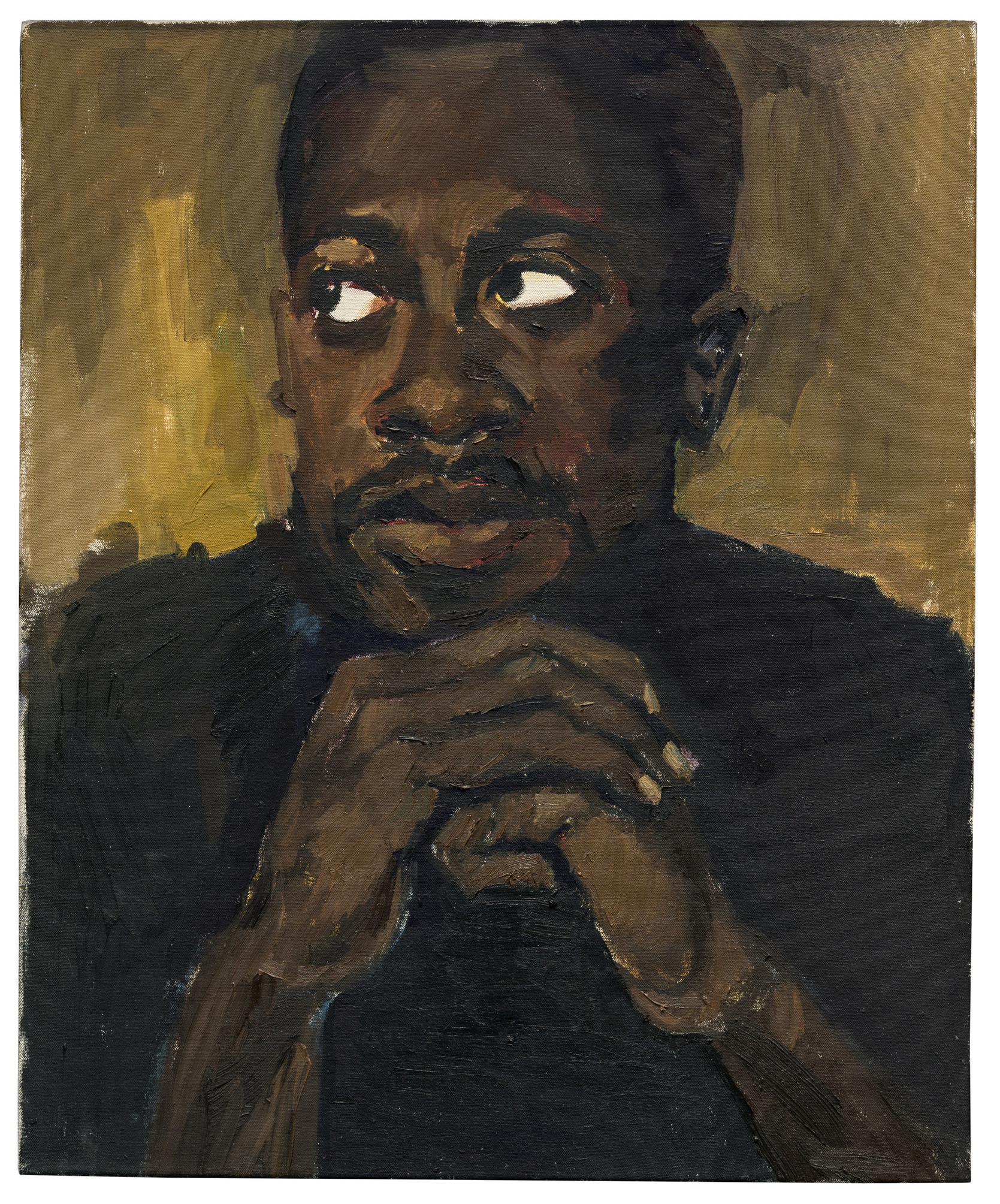 Caland's painting also invites viewers to reflect on the nature of portraiture when compared to A Few For the Many, a painting by the young British artist and writer Lynette Yiadom-Boakye. While her portraits also have a sense of intimacy, they are not based on actual people. Instead, she synthesizes her fictional subjects from found images, memories, and her imagination. In contrast to the images of people of color that saturate the media, Yiadom-Boakye's portraits are notable for always depicting Black bodies in contemplative or tranquil states of repose. JaBrea Patterson-West, a recent Mellon Fellow at LACMA, writes in an essay for FlashArt that these fictional subjects "make visible the invisible reality of being in a black body… A world that makes it its goal to disappear black lives needs art that affirms black lives." 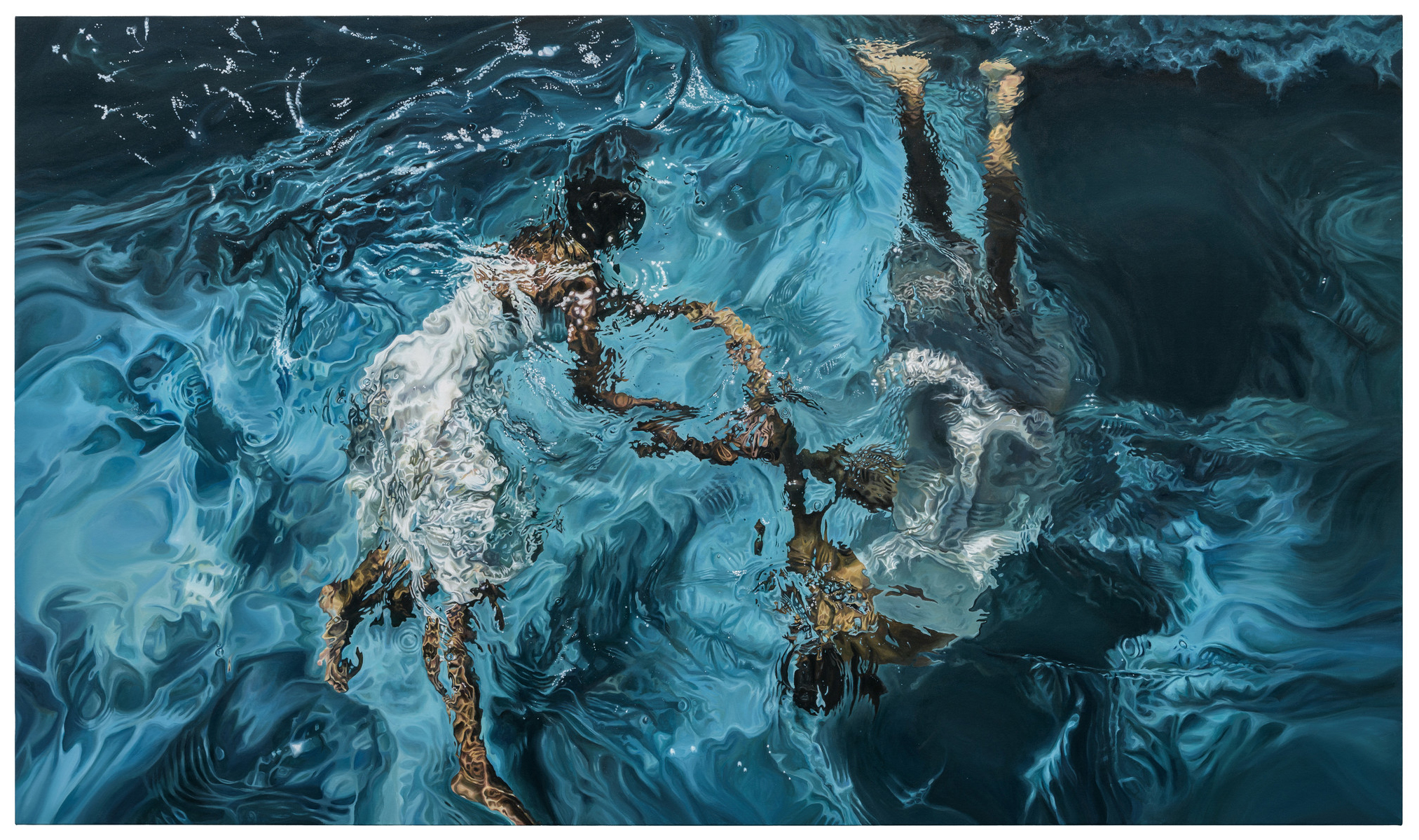 Calida Rawles, The Space in Which We Travel, 2019, Los Angeles County Museum of Art, purchased with funds provided by Allison and Larry Berg and an anonymous donor, © Calida Rawles, photo © Museum Associates/LACMA

Yiadom-Boakye's portrait also challenges us to critically consider the "gaze": Who is looking at the artwork? Who has historically held the dominant "gaze"? And for whom is the artist creating? Many of the works in the exhibition raise these questions, including a monumental painting by L.A.-based artist Calida Rawles from her recent series addressing the theme of water in African American history and expression. Painted in a laborious, hyper-realist way, The Space in Which We Travel depicts two adolescent girls in white dresses submerged underwater, their bodies dissolving into ripples, swirls, and bubbles. Rawles sees water as turbulent and terrifying but also enveloping and elevating. "In order to survive in water," she points out, "you have to relax. If you struggle, you sink. You take the waves as they come. I think of that as just a state of being."

A small but powerful exhibition, View from Here is the first in a series of shows that will reveal the ongoing trajectory of LACMA's collecting practices, particularly efforts to increase diversity and equity in our collections. We look forward to sharing more acquisitions from across the museum's curatorial departments in presentations that resonate with all audiences. 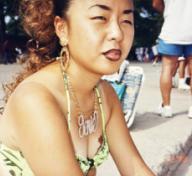