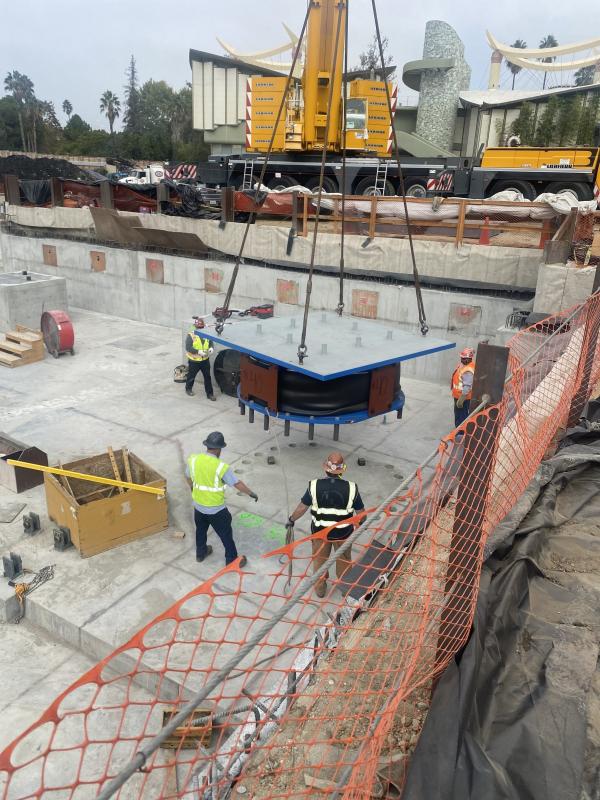 One of the most important aspects of the new David Geffen Galleries is the structure’s state-of-the-art seismic protection, which is particularly necessary in an active seismic region like Los Angeles. To learn more about how the new building for the permanent collection is designed to withstand earthquakes, we chatted with Eric Long, Principal, Skidmore, Owings & Merrill (SOM), the structural engineer of record for LACMA’s construction project; Carlos Gonzalez, Division President, Western Region, and Chris Bell, Senior Project Manager, both of Clark Construction, the general contractor for the project. 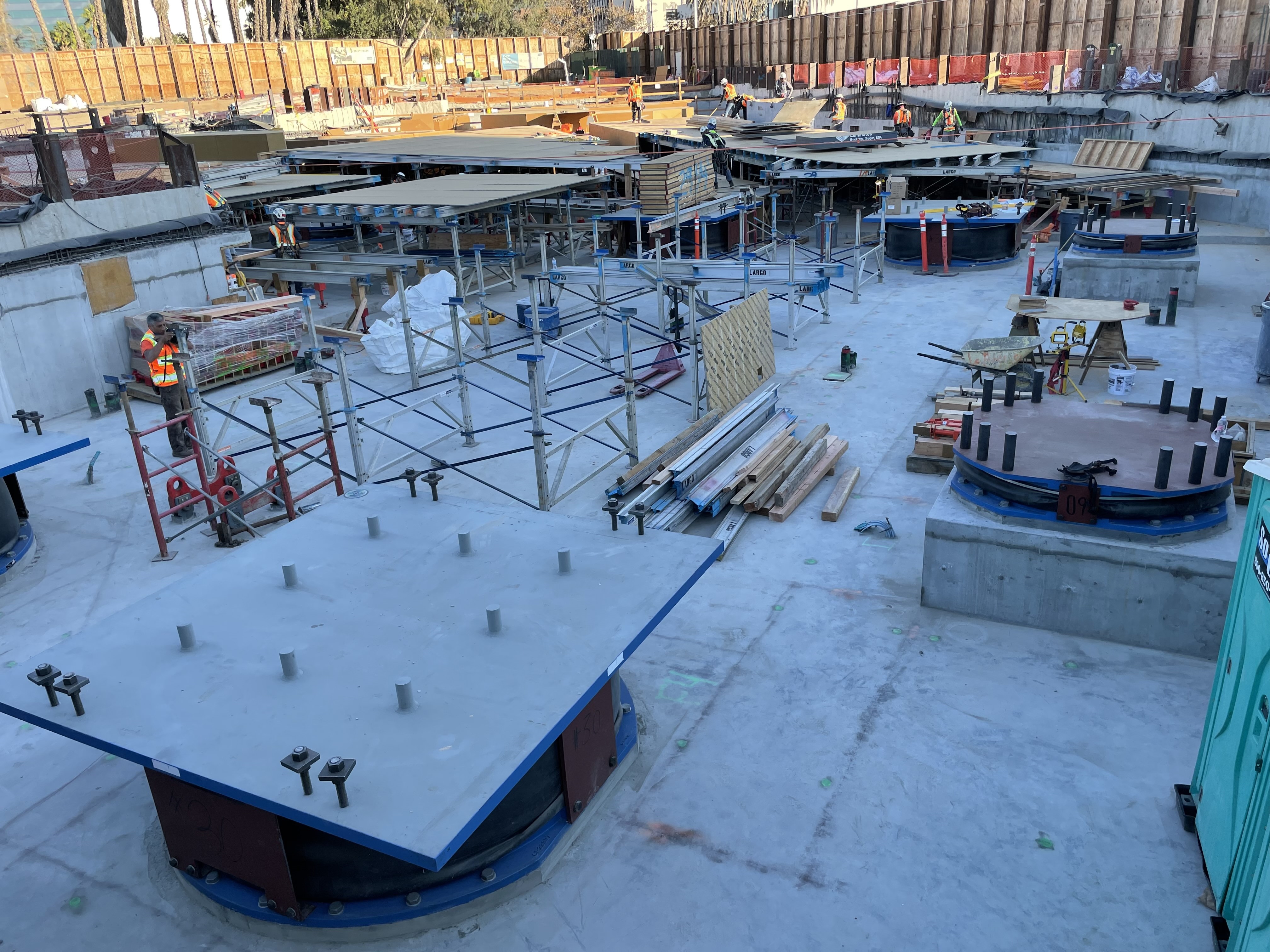 Can you explain how seismic base isolators work?

Eric: A friction pendulum seismic base isolator has a large concave spherical dish on the top and bottom with an articulated slider in the middle. The bottom dish is bolted to the foundation while the top dish is bolted to the building above. The slider is lined with a special composite and can slide up and down in any direction in the concave spherical dishes. In the event of an earthquake, instead of the building shaking violently, the slider will slide in a gentle, fluid motion, keeping the motion of the building low and gentle. This mechanism helps to keep the building safe, along with the people and the art inside the building.

I imagine seismic base isolators are fairly common in Southern California. Is there anything unique about the isolator technology used in the David Geffen Galleries?

Eric: This technology has been around for 30 years and used widely in Southern California. For the new David Geffen Galleries at LACMA, the base isolators are more sophisticated and powerful thanks to the triple friction pendulum design. The concave dishes and sliders have different radii and coefficients of friction which means we can fine-tune the motion.  We can think of it as first gear, second gear, and third gear, where moderate earthquakes are tuned for motion in the slider, whereas higher-energy earthquakes such as M8.0 San Andreas events are tuned for motion in the larger top and bottom concave dishes.

When did you begin work on producing the seismic base isolators?

Chris: Clark has been working with the structural engineering team at SOM and the manufacturer of the seismic base isolators, Earthquake Protection Systems, for many years. We began the eight-month manufacturing and testing process in February 2020, to ensure the isolators were ready in time for delivery and installation. The manufacturing process is lengthy, and includes an engineering report approved by SOM, rigorous quality control, testing of every single isolator produced, and the logistics of delivery.

Did you make physical mockups of the actual seismic base isolators?

Chris: There are two full-scale base isolators manufactured exclusively for testing purposes as part of the peer-review process, and additional reduced-scale base isolators were produced for extreme earthquake cases as the large size of the bearings exceeded the capacity of the testing rig. Clark also worked closely with Erwin Services Corporation, our trade partner responsible for installing the base isolators, to construct several mockups of the grout connection process, a critical step of the installation procedure.

How is a physical mockup process important in planning for the installation?

Chris: The execution of these physical mockups not only confirms that these isolators will perform as designed, it also allows the contractor team to practice important placement procedures, vet assumptions, and ultimately pave the way for a seamless installation process for the seismic base isolators.

How many seismic base isolators are in the David Geffen Galleries? 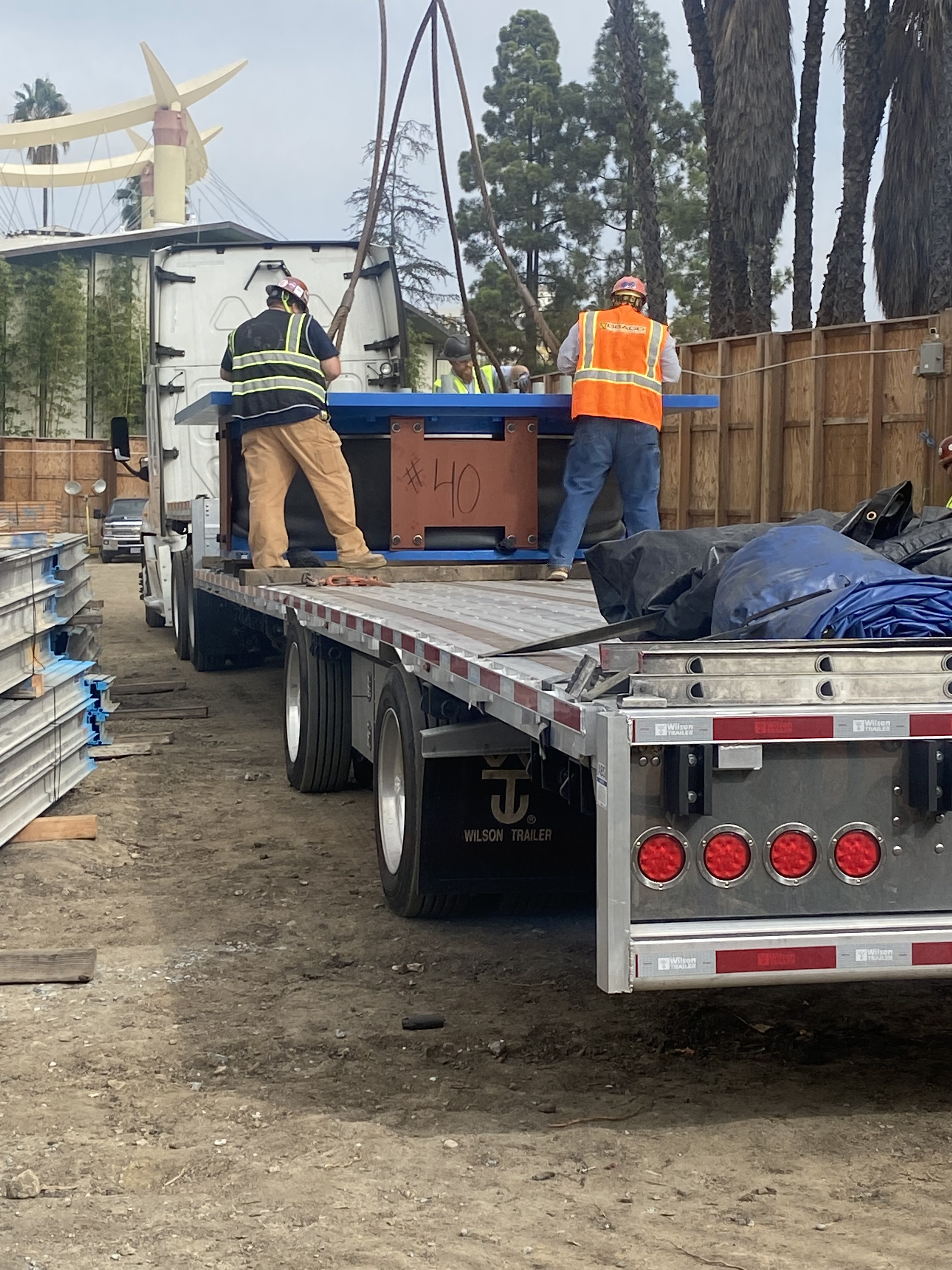 Workers unloading a seismic base isolator from a truck, photo courtesy Aurora Development

How big are the primary base isolators?

Eric: They are massive. The dish is over nine feet in diameter. Each isolator weighs 40,000 pounds, but with the steel top plate included, the assembly is 50,000 pounds. They are so big you can only fit one on a semi-trailer truck at one time. They are manufactured in Vallejo, in the Bay Area in northern California, and sent down to Los Angeles via truck—one at a time. We utilize a special crane at the project site to place them at the jobsite.

Carlos: The isolators we are utilizing on the LACMA project have the largest combination of earthquake load and displacement of any isolator manufactured by EPS in over 30 years. 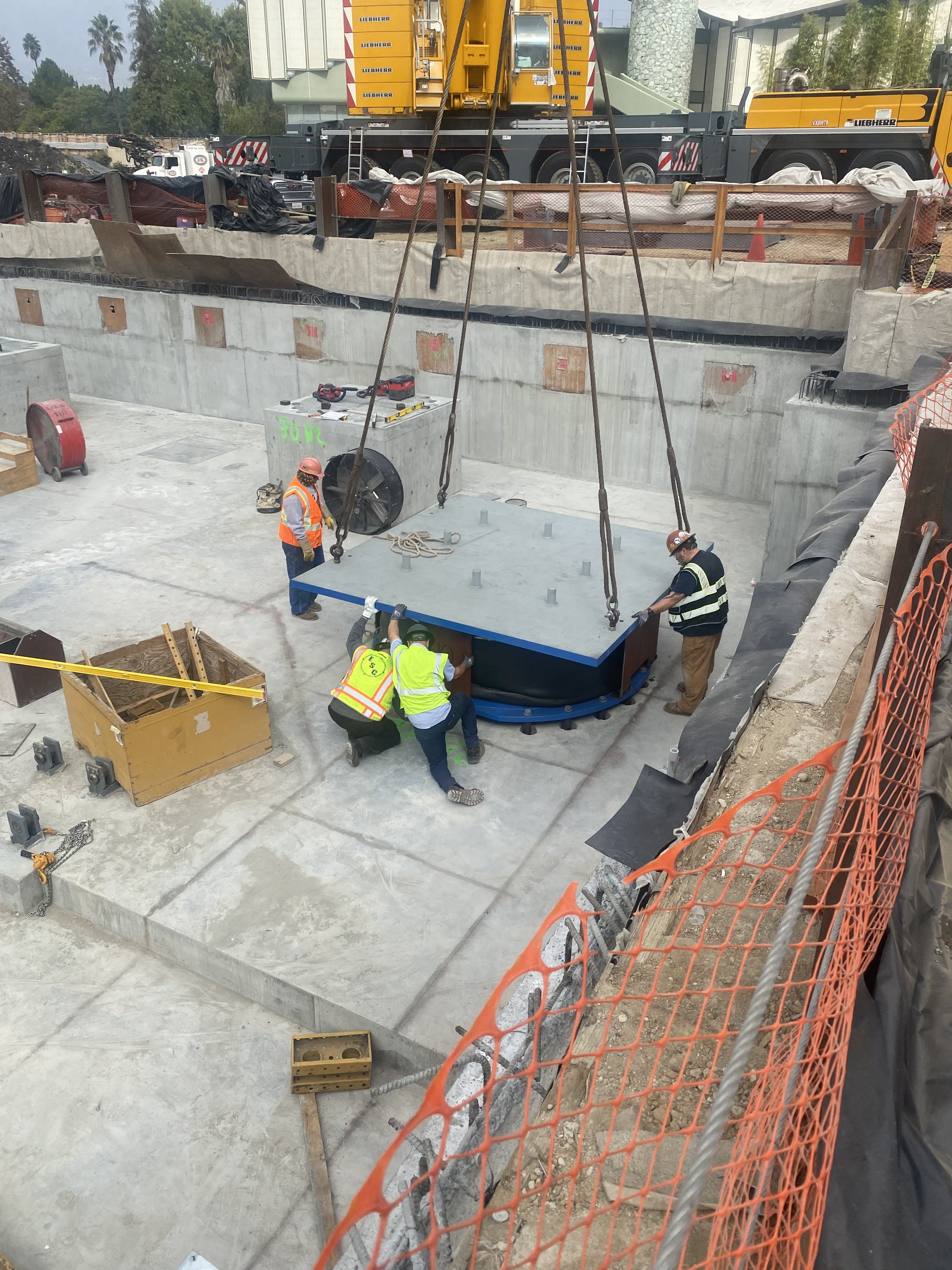 Tell us more about the installation of the base isolators.

Chris: To install the large isolators, we utilize a six-person team to move them from the truck into place. That team also works on framing and grouting to finalize the connection. Due to the isolators’ exceptional weight and size, using a traditional tower crane to place them on site wasn’t an option. Instead, we have mobilized several 400-ton cranes to set them in place. Eventually we will be coordinating multiple mobile cranes with the tower cranes; it will be a delicate choreography with 15 different cranes in operation.

How many have we installed so far?

Chris: To date, we have installed 22 isolators—12 large and 10 small—on an excavation site on the north side of Wilshire. The next series will also be installed north of Wilshire, before we mobilize to the south side of the site. To commemorate setting our first base isolator, we ordered the team slider sandwiches to celebrate. They did look a lot like the isolators! 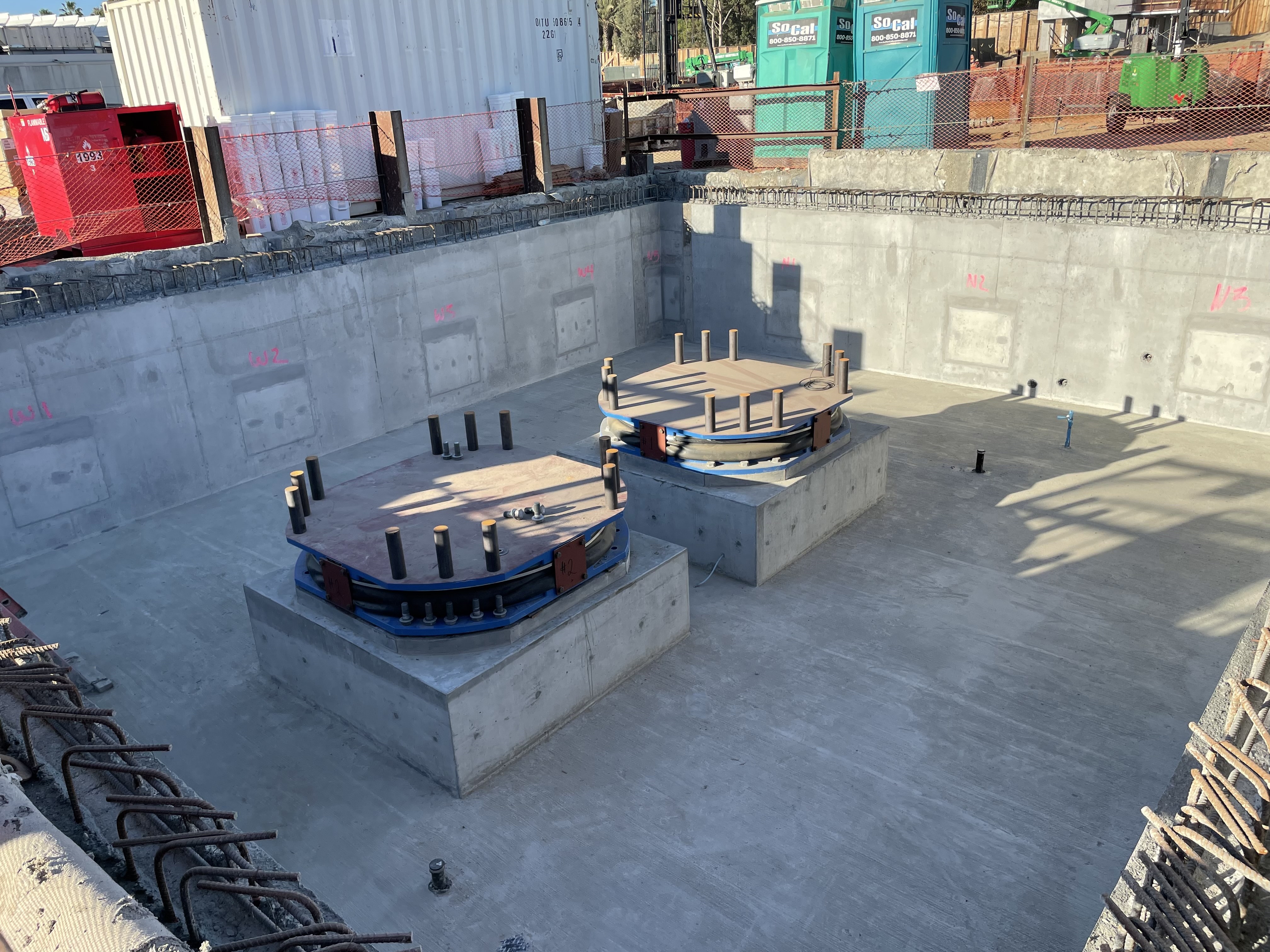 As for the smaller ones, how small are we talking?

Why are the base isolators so big?

Eric: What is interesting about this project is that the building is designed to move up to five feet in any direction during a seismic event. That is why the primary isolators are over nine feet in diameter. There are three primary engineering reasons behind the five-foot displacement.  One is a state-of-the-art seismology assessment and peer review for the site. Second, the objective to provide maximum protection to the people and the art by using softly curved concave dishes that minimize transmissibility of movement from the ground to the building. Lastly, the decision to use highly loaded isolators supporting only the corners of each tower of the building. This last point was implemented in close coordination with Clark and EPS to determine the optimal number of isolators.

Five feet! Is that standard for buildings of this size?

Eric: It’s on the high side. Three to four feet are the average displacement, I’d say, to meet the minimum intent of the code. In our case we are providing a high-performance continued functionality design that minimizes the life-cycle cost over the life of the building.

What are the design implications for having that range of movement?

Eric: The isolators sit in the basement below grade. At ground surface, we have to have a zone to allow that movement. So, at ground level, there is a five-foot-wide seismic moat around the whole perimeter of the building. It is not too far off from medieval moats, but, of course, we have to be able to walk up to the building and enter. As such, this zone features a specially designed cover, so you can walk right up to the building.

Another factor we had to consider when designing the structure to allow for movement was the utility infrastructure within the building. Electrical conduit, ductwork, and plumbing all have to cross the isolation plane. As such, these systems must be designed to allow for movement, too. We, along with Buro Happold, the MEP engineering firm, carefully laid out all the conduits to have special joints that provide flexibility. These are similar to the gas line behind your stove (that flexible corrugated metal), but on a bigger scale. You snake them in a big U or S shape so you have slack, so they can move in any direction and have enough wiggle room to move five feet. We selected a similar corrugated flexible ductwork for the air ducts in the building.

What is the most significant aspect of this type of seismic design?

Chris: You can design a building to withstand an earthquake, but often times there is significant repair and operational loss to the building. The primary advantage of base isolators that isolate seismic activity is that it allows the building to experience a seismic event and have minimal damage to the structure and highest level of safety for the people and the art. Because the isolation design limits the amount of movement of the superstructure, it also limits the movement of the contents of the structure, in our case, thousands of visitors and staff and priceless art.

Carlos: This type of design is an upfront investment in the building—it provides a safe environment for people and art and reduces the cost of recovering after a seismic event, as well as the long-term operational cost of the museum. LACMA is an encyclopedic museum with all kinds of art on view. In the future, LACMA won’t have to come up with seismic bracing solutions for all the different types of art every time the display changes, because the new building has support built into it to protect the artwork. 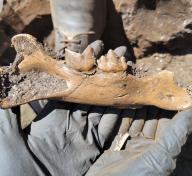