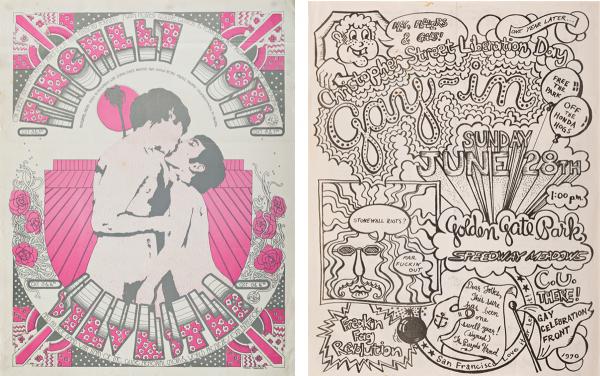 Happy Pride from LACMA! As the month comes to a close, we're exploring a few significant pieces of ephemera from California's queer history that have recently been added to the museum's Decorative Arts and Design collection. 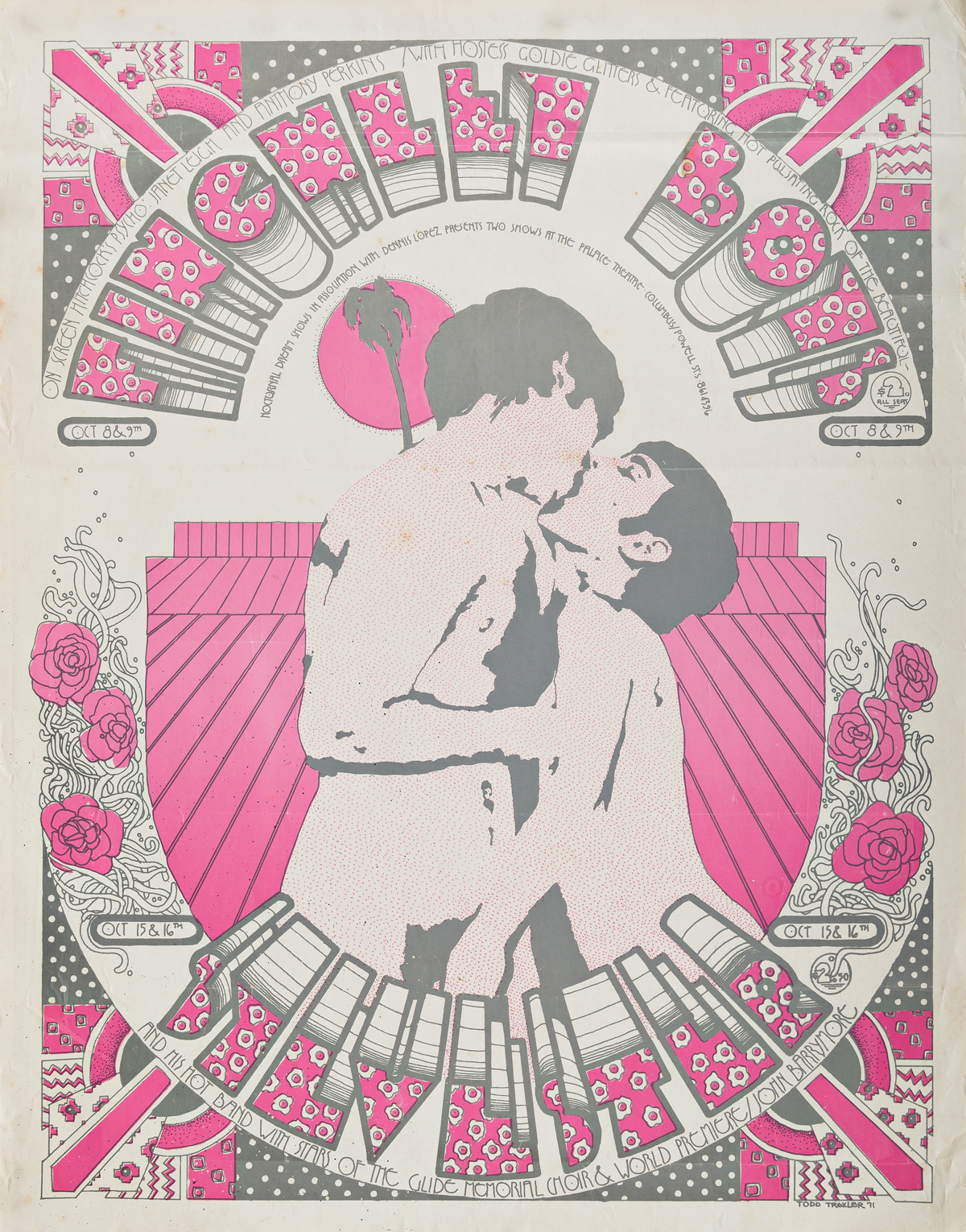 In the center of this poster, a kissing couple is transported into a pink Day-Glo dreamscape. Blooming flowers, a bright and low-angled sun, and palm trees frame their embrace in what appears to be an infinite fluorescent treadmill.

Todd Trexler created this poster to advertise a series of programs that took place at San Francisco’s storied Palace Theatre in October 1971. At the time, Trexler was quite busy, designing posters for the Cockettes, Nocturnal Dream Shows, Divine, Sylvester, and other Midnite happenings at the Palace Theatre organized by his friend "Sebastian" (Bill Graham’s accountant, Milton Miron). Trexler’s sought-after designs helped to define the aesthetic sensibility of the late-night, gay hippie performance scene at the Palace, where many young artists performed before achieving international fame.

This poster highlights performances by The Finchley Boys, an Illinois-based rock band, and an early-career Sylvester, the Black and genderfluid “Queen of Disco” who would later bless the American public with hits like “You Make Me Feel (Mighty Real).” Born in Watts and trained as a gospel singer, Sylvester moved to San Francisco and performed with the Cockettes—a drag theater troupe based out of a commune in Haight-Ashbury—before pursuing a solo career. Sylvester would replace his early backup, the “Hot Band,” with Martha Wash and Izora Rhodes-Armstead (the “Two Tons O’ Fun”), who would eventually perform as The Weather Girls and release “It’s Raining Men.”

This poster captures a period of intense creativity, talent, and collaboration in the fertile gay psychedelic scene of the Castro and Haight-Ashbury neighborhoods. 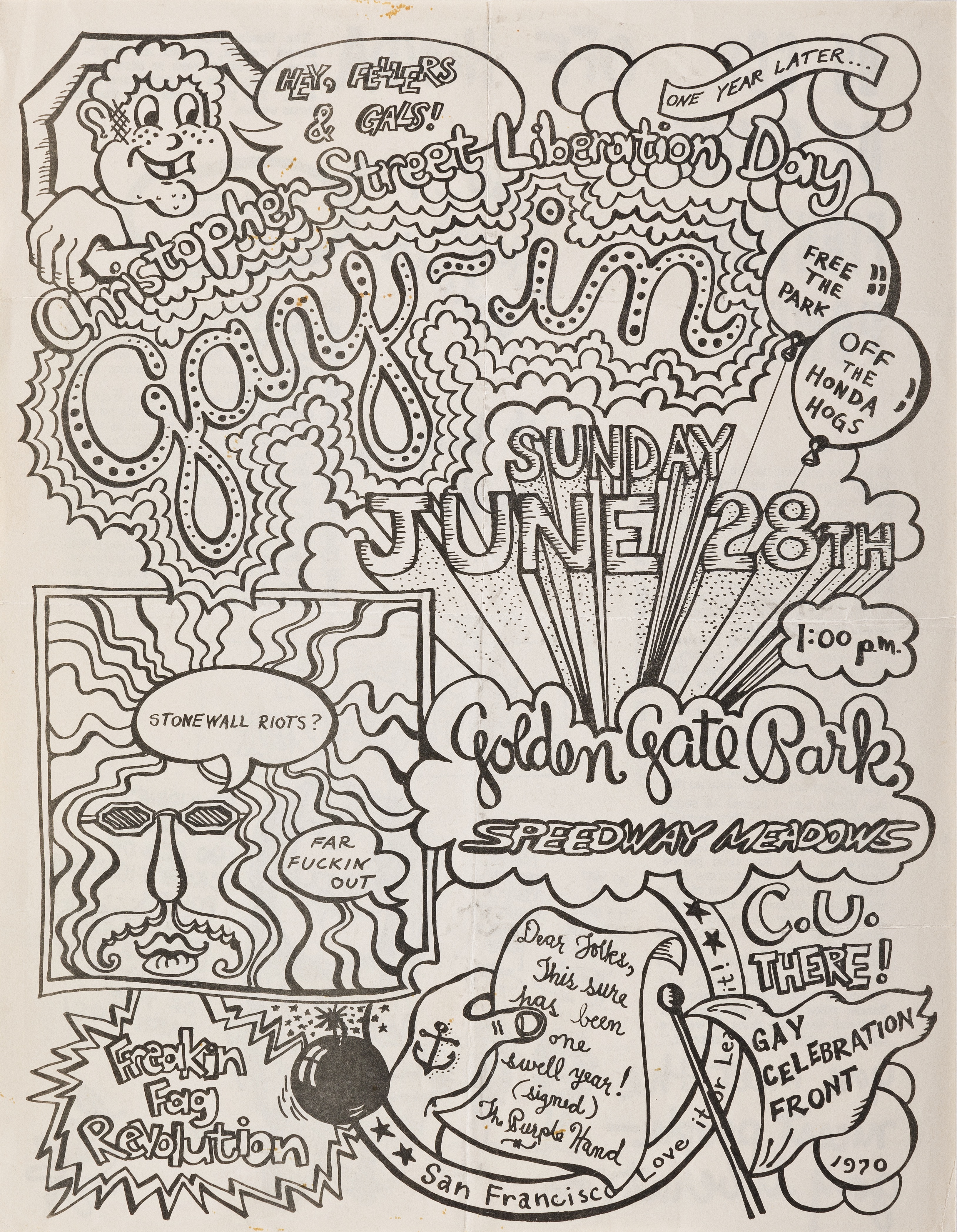 “Hey, Fellers & Gals!” This cheaply made and widely disseminated Xerox flier promoted the June 28, 1970, Gay-In at Golden Gate Park’s Speedway Meadows, which was held to commemorate the one-year anniversary of New York City’s Stonewall Uprising. Known as the Christopher Street Liberation Day Gay-In, the event was organized in solidarity with concurrent protests in New York, Chicago, and Los Angeles, and is now recognized as the first Pride parade.

The mostly unknown designers of this flier deployed the D.I.Y. aesthetics of cartoons, graffiti, and photocopy art to disseminate protest information and mobilize San Francisco’s queer community. This flier is a powerful reminder that the history of Pride is rooted in radical opposition to police brutality. The 200-person Gay-In, which attendees have described as a parade and picnic where “homophiles gathered in pride in their identity,” was ultimately dissolved by equestrian officers in a confrontation that resulted in protesters being detained. After the event, protester Leo Laurence (a former editor of Vector, the magazine for the Society for Individual Rights (S.I.R.) told the Berkeley Barb, “if [police] continue to persecute minorities like ours, we have no choice but armed revolution.” 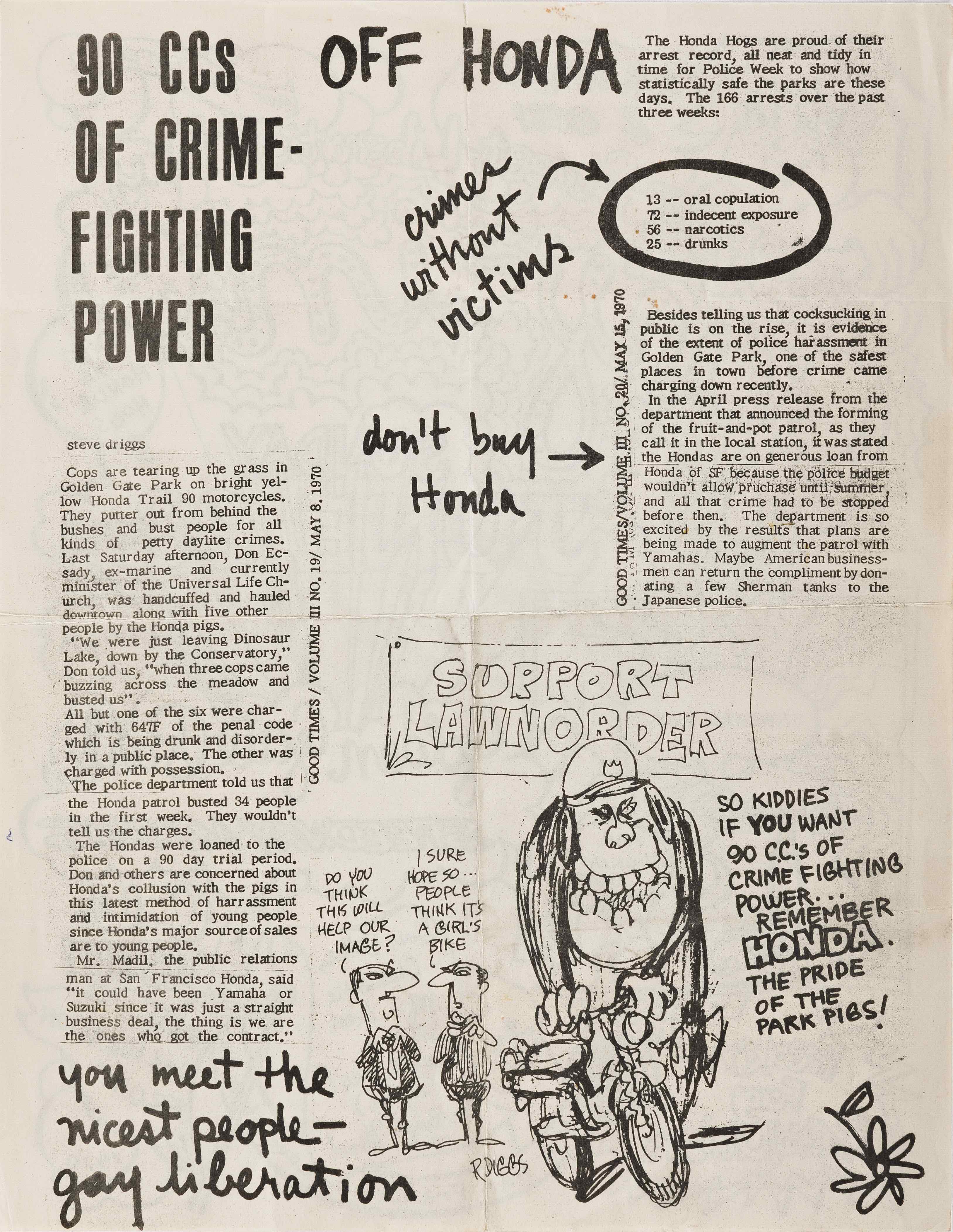 On the reverse side of the flier, a reprinted article from the underground San Francisco newspaper Good Times condemns the police harassment of queer patrons of Golden Gate Park and critiques the broader economic structures that enable state violence. The author specifically calls out the Honda Motor Company for complicity in providing vehicles to police officers. Below, a cartoon of a policeman furiously pursuing “LAWNORDER” on a bike is signed by Harry Driggs (R. Diggs), a San Francisco–based political activist and underground cartoonist who created graphics for the San Francisco Green Party.

The Christopher Street Liberation Day Gay-In flier will be on view in the exhibition What Would You Say?: Activist Graphics from the Los Angeles County Museum of Art when it opens at the California State University Northridge Art Galleries on August 27, 2022, and at the Vincent Price Art Museum in spring 2023. 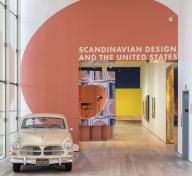 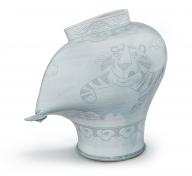