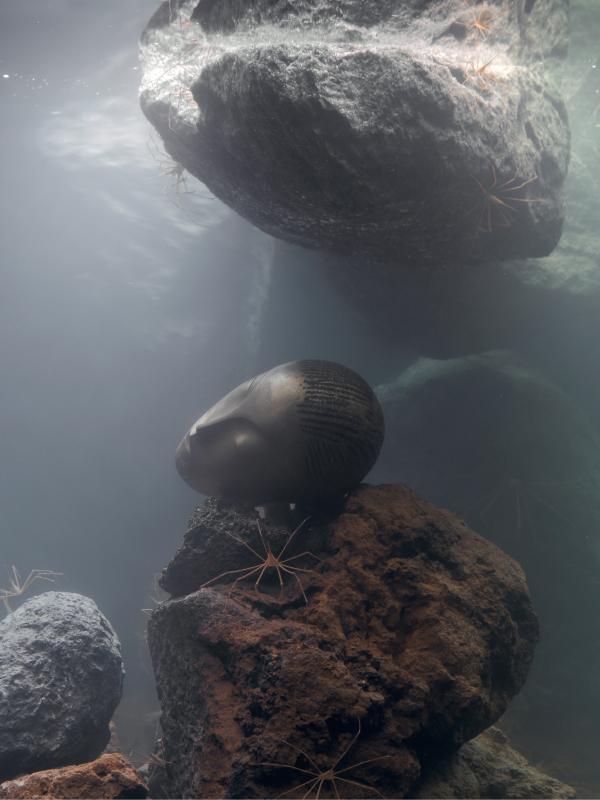 I stand at the mouth of the gallery. It gapes.

And still I stand. I have been hired by the Los Angeles County Museum of Art to announce each patron’s name as they walk in.

A litany of sounds. Mostly they’ve stopped having meaning. Mostly, they never had meaning in the first place. As patrons enter, they are either excited or annoyed. Occasionally, an old man, and it is always a man, will refuse to give their name. Occasionally, children will translate for their immigrant parents. But most people are not here to see this gallery; most people wander in, looking for the Samurai exhibition [now closed] next door, or the Nature and the American Vision exhibition beyond it. Only the real hardcore art nerds are here for Pierre Huyghe.

They stay for hours and come back day after day. 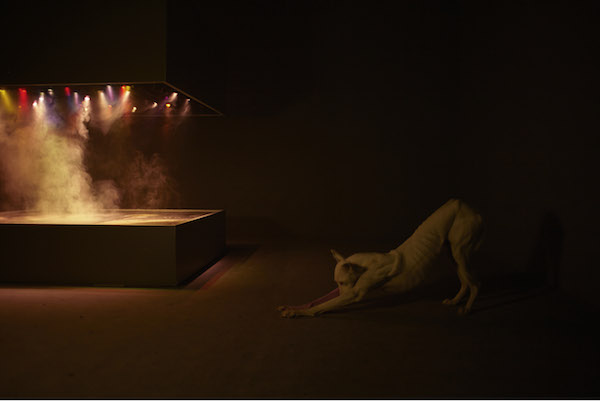 Pierre is a French artist. He is very famous, apparently, mostly for his videos. I had never heard of him before I auditioned for and got this gig in his retrospective. I quite like the exhibition, a weird labyrinth of false starts, plants growing from the floor and fish tanks with prehistoric creatures rising like monoliths to drowned gods. There is a floor made of black ice and a video of a glacier and a complete climate system: ice, water, and vapor.

But mostly people are here to see the dog, a white dog with a pink leg. She is very beautiful. But she is also just a dog.

Her name is Human.

Photo of Human with handler by grooviekenn via Instagram

There are other things in the gallery you might like, though maybe you will not think they are art. There’s a playable Atari game on the ceiling. A pitch-black room of transcendent music with a miniature stage light show in the center. Pictures and video: humans wearing animal masks, animals wearing human masks. Emancipated fictional characters. Fragments of walls, just walls, imported or recreated from the retrospective’s past iterations.

A grungy ecosystem, with actual water lilies from Monet’s garden. 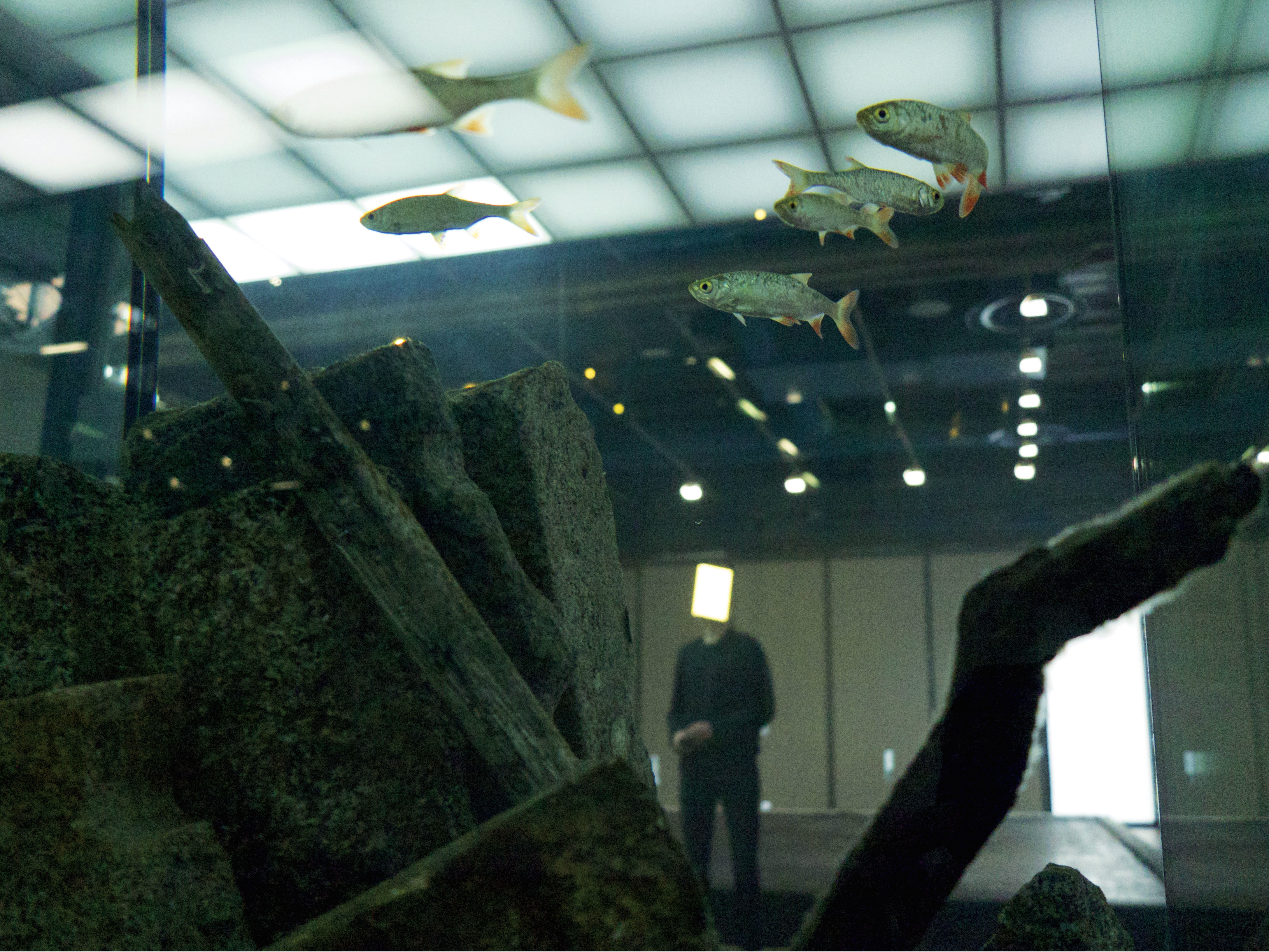 A poster of today’s celebration that changes every day.

And this is part of the point. The retrospective changes hour by hour, and shows no easy chronology. It is an event, an ecosystem, a meditation on and deconstruction of time, the subconscious, and man’s relationship with the environment. On one wall at the entrance, the artist has bored through the paint to reveal the walls of the last three exhibitions to inhabit this space.

And still I stand at the mouth of the gallery. Green neon flickers on and off behind me. Ants crawl out of a diagonal wall that juts into the space. Or they are meant to, they have grown lethargic and stayed inside for a few days now. When the neon isn’t on, the gallery looks closed, under construction. People stop at the entrance to ask if they can go in. “Is it open?”

I have a feeling of eternity. That existing in a museum for too long grows you as timeless as the art. It stretches you out across eons in glass boxes. I am the ferryman, demanding two coins of each of the dead to cross the river Styx. "May I please have your full name."

Sometimes cool things happen. People will clap for strangers as they come in, or greet them by name. Moments of connection, of changed relationships, of urban intersections. Mostly, people just walk in, a bit confused.

I tell them what the artist told me, when I auditioned: “To be announced.”

There are no tours of this gallery, not officially. But the guy who gives tours to Jim Carrey and Brad Pitt and the major donors when they come through, this guy draws a lineage to Marcel Duchamp and the idea of the spectator completing the artwork. It’s not about a discrete thing on a wall; it’s about how you engage with it. I kind of love that. But then, I’m a theater guy.

And still I stand, announcing names. Perhaps even this state of perpetual unbearable boredom is one of the artist’s pieces, I think, perhaps he really is a genius. It’s the state of life, unveiled, stripped of cocktail parties and discrete tasks with beginnings and ends that mean something. A state as constant and unchanging as breathing. If so, then each guard is performing their own durational work, standing for eight hours a day, six days a week, 52 weeks a year, for $11 an hour, in a museum.

Sometimes, people ask to take pictures of me, but not of them.

This piece first appeared on ArtsBeatLA.

1 comment
Michael Buitron says:
This is the most authentic post I've ever read at Unframed. You should have more posts by guards, janitors, groundskeepers, and line cooks and busboys from your dining establishments. Let them write in the language and style they're most comfortable, and post them unedited. It's a shame that you felt the need to edit the piece and not include a direct link to the article.

This doesn't sound like a press release, boosterism by some curator, or an art historian talking down to us lumpen proles. 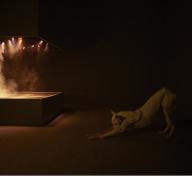