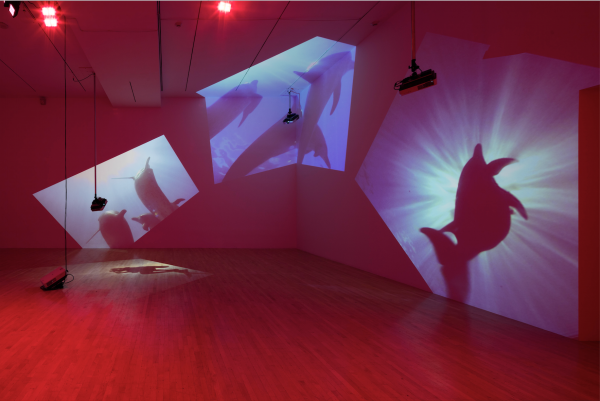 A Conversation with Diana Thater

Diana Thater: The Sympathetic Imagination, one of the largest shows LACMA has mounted, opened on November 22. Recently, Thater sat down with LACMA CEO and Wallis Annenberg Director Michael Govan and co-curators Lynn Cooke and Christine Y. Kim to speak about her practice.

Govan: One of the striking aspects of Diana’s early work, like Oo Fifi, Five Days in Claude Monet’s Garden, is that the work is rough video, very chunky, and it’s broken apart into its red, blue, and green components. In the early 90s, painting was dominant, and you use this rough medium. I’m curious about your coming to that. Is there a precedent for that that you were thinking about?

Thater: I couldn’t paint. So I decided I would do something I could do. Joan Jonas is very important to me. She utilized the properties of the medium, as did Stana and Woody Vasulka, married artists who are quite wonderful. And Nam June Paik, of course, deconstructed the equipment. When I started working, some of the most important artists working in video were doing things that I wasn’t interested in. They were doing very theatrical and neo-narrative work. I wanted to jump back to those innovators like Paik, the Vasulkas, and Jonas. I wanted to go back and pick up where I thought their ideas had left off and move it into the future. I started by deconstructing the apparatus, taking the machines and images apart.

Kim: It’s also important to note where we were technologically in the early 90s, and where you, Diana, were in your career, having just come out of Art Center and doing an artist residency in Giverny, France: what is accessible to a young artist on a tight budget? Diana found used projectors, and she was unable to put the three beams into register to make a complete image, which then led to the idea of keeping them separated and then bringing them back together in Oo Fifi. 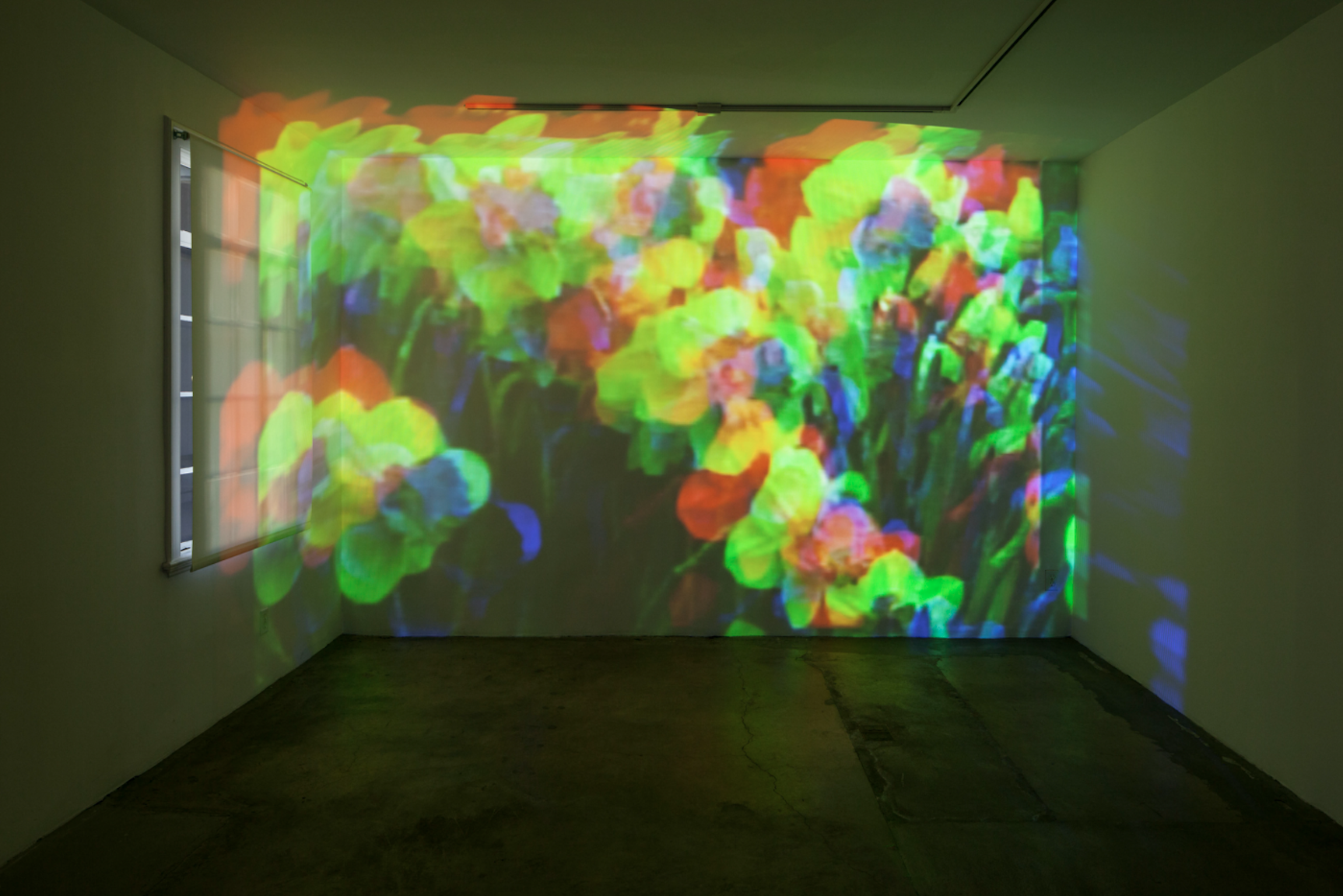 Thater: I grew up in New York and my parents would take me to museums. As a child, Monet was just my favorite, because of the color and the images. People love Monet. It’s beautiful. I got that residency kind of as an accident. I applied for it thinking, I’ll never get that, but I’d really like to have a six-month vacation in France. I got a call at my waitressing job and they told me I’d gotten this residency, and that was very exciting. So I went and lived at Claude Monet’s—I lived in the barn. I had this cheap video camera that I took with me. I had no idea what I would do, so I just started documenting the garden. Then I came back and had tons and tons of footage, and someone asked me to do my very first show. I took all this footage, and I thought, what am I going to do with it? I’ll pull it apart the way Monet pulled color apart. His garden is essentially an artist’s palette. And he pulled the colors of paint apart in order to make paintings that are literally about light. Here I was, working in a medium that is focused on light, and I could somehow talk to his work with my own. So I took apart the image into red, green, and blue and it gets this impressionistic feel, which I didn’t know it would do. It was one of my first shows.

Cooke: And why two parts?

Thater: I was invited to be in two group shows simultaneously, and I only had one piece. So for one show I deconstructed the images. The other show started two weeks later. What am I going to do? I reconstructed them. In Oo Fifi, Five Days in Claude Monet’s Garden, Part 1, I use one projector and took apart red, green, and blue, which are the component colors of video. And then in Part 2, I took three projectors, red, green, and blue, and tried to put the image back together. And they were in two different places in Santa Monica, so you could see one and then go see the other. So that’s why I did it. Sort of for practical reasons. 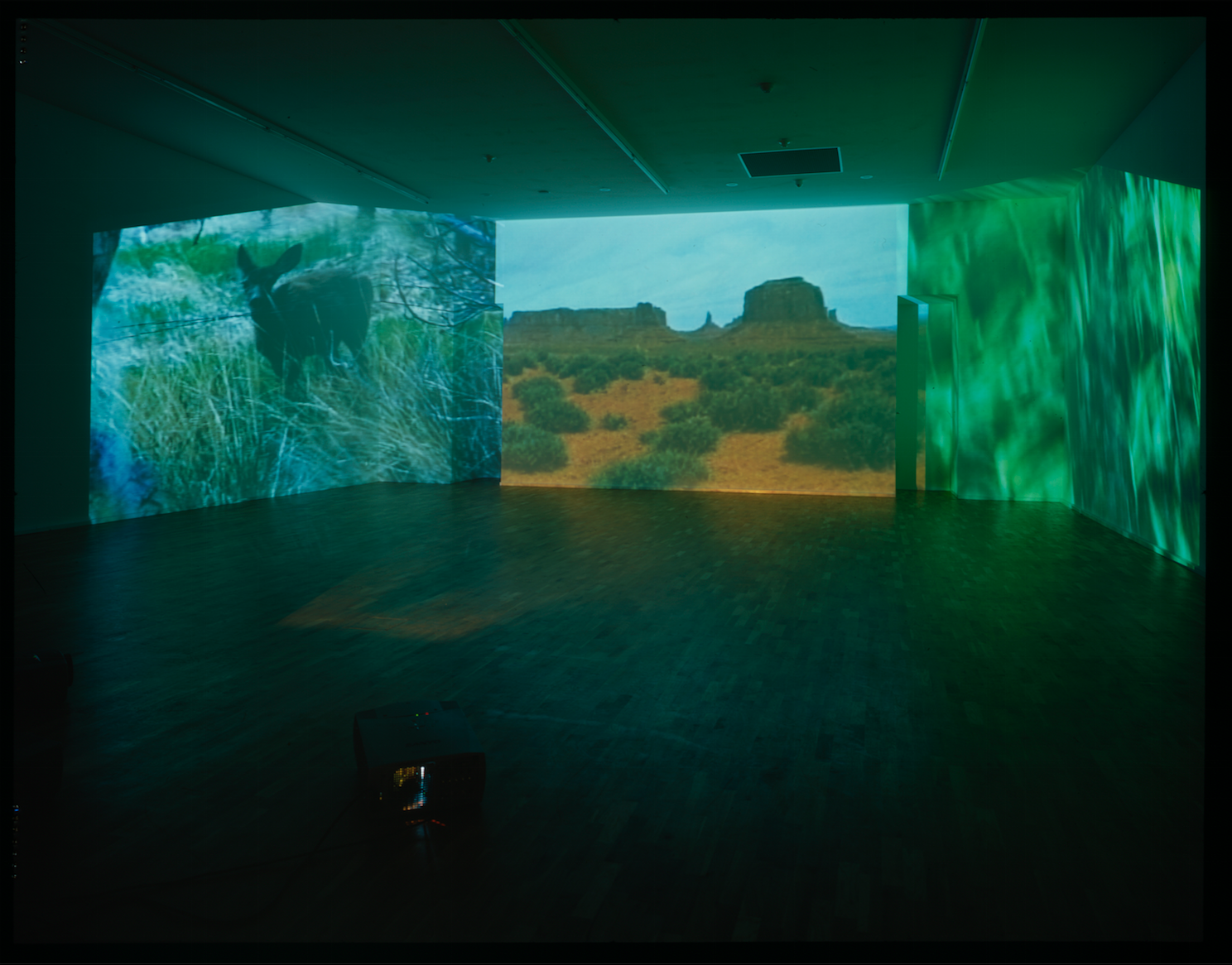 Govan: Let’s talk about Abyss of Light. It features some of the landscape not far from here, of the west.

Thater: Of the southwest, yes. My BA is in art history, but I also studied film history, and I’m a big fan of classic American films. In particular, Westerns, because they feature very interesting depictions of the American landscape, the southwest. So I spent a few weeks traveling around the southwest, going to all the places where John Ford, the premier director of American Westerns, filmed some of his greatest works. I filmed from the same sort of perspectives. In fact, in Abyss of Light, there is a sign that says: John Ford Point. And if you go to the edge of John Ford Point and look out, it’s the shot of Monument Valley from The Searchers. The interesting thing about Ford’s films is that the landscape becomes a character and not just a backdrop. What does it mean for a landscape to be a character and to have its own life? So I made this three-part piece. The beginning is separated into red, green, and blue and the end is separated into cyan, magenta, and yellow. The opening scene is from Bryce Canyon, and the closing is Death Valley. Death Valley is always an appropriate ending for anything.

Govan: You’re also a little bit of a science junkie. You’ve recombined those NASA images of the sun, those unique, flat images that were animated so the sun returns to its sculptural three dimensions. I remember when you presented knots + surfaces at Dia in 2001; you based it on this mathematical treatise about how bees find flowers and map time and space. Do you think about a piece and then you do the research? Or are you reading books and watching films about science and these pieces come about? 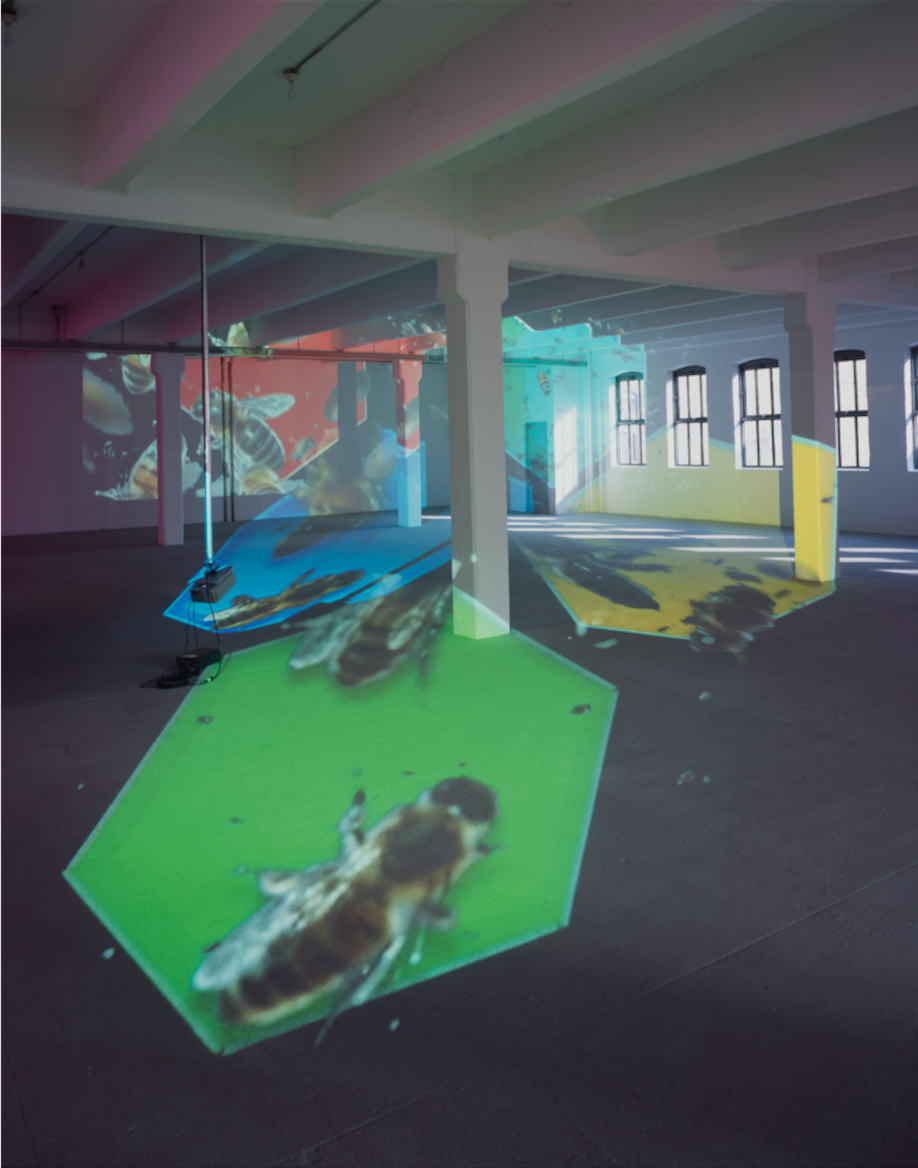 Thater: Well, I read anything from anywhere and I watch tons of film and video. I’m addicted to National Geographic. David Attenborough and Jane Goodall are my heroes. So I’m always reading and researching. When I come upon things that intrigue me, I keep them in the back of my head, and when I’m ready to address a particular idea, I actually start working on it. So for Dia, the hard part was that the space was so huge and I didn’t want to build a single wall. When I first started working, I wanted to address architectural scale. I only used spaces the way they were given to me. So for something like Dia, I took something very tiny, the honeybee, which has an interesting culture. They map time and space by dancing. I thought this was a very beautiful idea. It was discovered by mathematician whose father was an entomologist, and I thought it was really interesting. It’s architectural, it’s scientific, but it has to do with subjectivity. It’s about the complexities and coexistence of culture, anyone’s culture, our culture, their culture. So anytime I read about or see something like that, I kind of store it away. NASA’s one of my favorite places to steal. They’re very fun, and they love to be cribbed from. They really like it.

Kim: Could you talk a little bit about how you took walls as they were and worked within a space? Then, fast-forward to the most recent work in the show, Life is a Time-Based Medium, where you’re actually acting upon the architecture to create a cutout that’s dictated by the image of the projection itself. 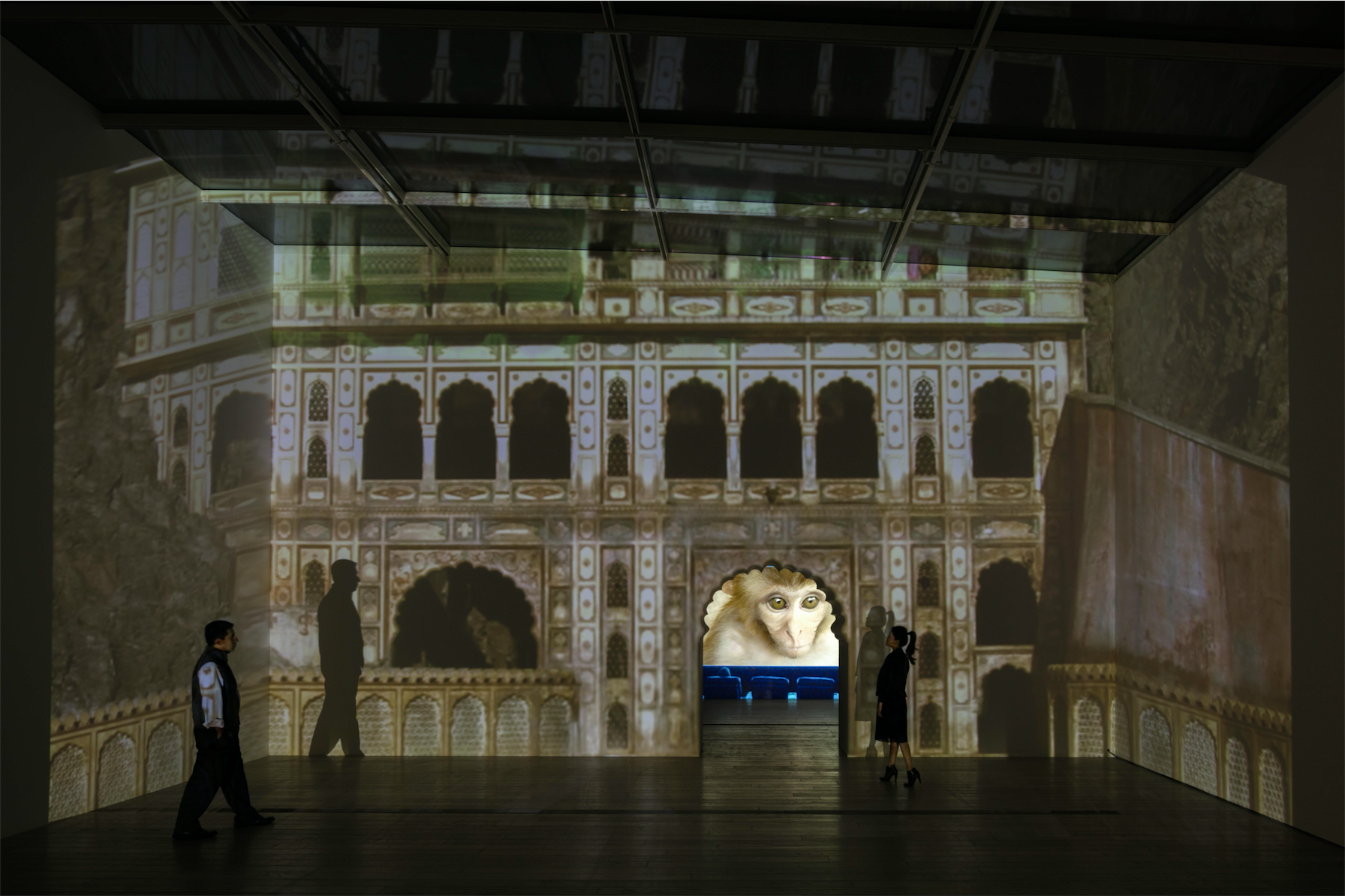 Thater: I’m very interested in the scale, intricacies, and simplicities of architecture. I’ve worked with very complex and very simple architectural spaces. For Life is a Time-Based Medium, I filmed a Hindu temple, which was idiosyncratic, asymmetrical, and interesting for any number of reasons. The most interesting thing was that it was just a façade built on a cliff. There is no inside. The temple actually has a door that doesn’t go anywhere. So I brought it into the installation—I cut out this beautiful scalloped doorway and gave the temple its own interior, a projection of a little tiny movie theater, with a screen. On the screen is a video of monkeys. The temple is a temple to Hanuman, the Hindu monkey god, and it just happens to be inhabited by wild monkeys. A friend of mine went on vacation to India and showed me a photo of it on his iPhone and I thought, I want to go there. Because a temple to a monkey god inhabited by monkeys—who made this for me?

Cooke: If you look at the work we have on view, there are always some outliers in your practice. For example, the series of chess games. How do they knit into your practice? 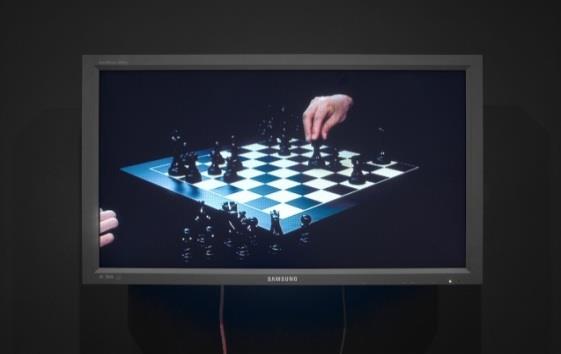 Thater: When I started working with chess, I was also working with falcons and falconers. I was interested in the signs and symbols of heraldry and war. Chess is a game of war, and falcons were brought back from the Middle East by the Crusaders—it’s all very complicated and I don’t know that I’ve ever had it quite clear in my mind, but they came to me simultaneously. And chess, of course, is very architectural. Also the minimal color, the complexity of moves, the strategy—all things that I’m not good at. They intrigued me.

Cooke: You went so far as to learn to play chess and you based different pieces within this series on famous chess games. So it’s not as if it was a casual—

Thater: Oh, no, nothing I do is casual. I studied chess with a senior master. Whenever I work, I work with specialist, because I don’t like to approach something without having any knowledge of it. So I studied chess for a year and I’m terrible, the worst. I’ve played chess with Michael, he beats me in five moves. It’s terrible. But I can make films about chess. The chess games I depicted are the most famous in history, and I was very interested in chess players and literature about chess. It includes Bobby Fisher’s great games.

Kim: There’s also a relationship between the chess pieces through the game’s emphasis on man-made, constructed rules, which can seem arbitrary in different cultures and environments. Whether they’re insects or plants or animals, you’re going in with a crew with several cameras and investigating and breaking apart some of those rules.

Thater: That’s the thing. You have something that’s very regimented but tremendously creative. The opening and the endgame are known quantities, but the middle game is where tons of creativity happens. And I’m interested in rules and structures and boundaries and the creativity that actually happens within, while keeping to the rules.

The conversation was condensed and edited for clarity.