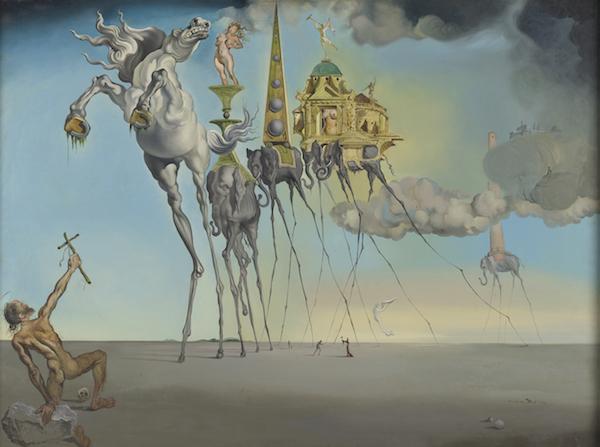 Now at LACMA: Dalí's "The Temptation of St. Anthony"

On August 8, 1940, Salvador Dalí arrived in New York, having fled Nazi-occupied France. One of the chief protagonists of Surrealism—and certainly the movement’s most notorious practitioner—the flamboyant, often controversial, and exuberantly self-promoting artist was already well known in America. Dalí created a large body of work during his exile in New York and later California, producing not only paintings but working across disciplines in the spheres of theater, fashion and jewelry design, literature, and film.

Film was a particular passion of Dalí’s, and he experimented with the medium throughout his artistic career. During the late 1920s and 1930s he collaborated with the filmmaker Luis Buñuel on surrealist masterpieces such as Un Chien Andalou and L’Âge d’Or. He was inspired by Cecil B. DeMille and the Marx Brothers, and while in the United States in the 1940s he worked with cinematic pioneers Alfred Hitchcock and Walt Disney. Reveling in the American culture of mass media, Dalí declared in a letter to André Breton: “I’m in Hollywood where I’ve made contact with three American Surrealists, Harpo Marx, [Walt] Disney, and Cecil B. DeMille. I believe I’ve intoxicated them suitably and hope that the possibilities for Surrealism here will become a reality.”

It is thus not surprising that Dalí eagerly rose to the challenge when the David L. Loew-Albert Lewin motion picture company announced a competition inviting artists to submit a painting on the theme of “the temptation of St. Anthony” to be featured in the 1947 film The Private Affairs of Bel Ami (based on the 1885 Guy de Maupassant novel Bel Ami). The artist allegedly painted The Temptation of St. Anthony (1946) in only a few days, in a studio next to the Colony Restaurant in New York (a popular hangout for celebrities and cultural elites).

LACMA visitors now have the lucky opportunity to see Dalí’s fantastical interpretation of the biblical tale: The Temptation of St. Anthony is on view on Level 2 of the Ahmanson Building until late February. Dalí’s canvas is on loan from the Royal Museums of Fine Arts of Belgium in exchange for René Magritte’s iconic The Treachery of Images (This is Not a Pipe) (1929) from our collection, which is featured in the Royal Museums’ current exhibition Magritte, Broodthaers & Contemporary Art.

In the story of St. Anthony, during the monk’s pilgrimage across the deserts of Egypt he is accosted by supernatural temptations in the form of hallucinatory visions and physical assaults—both seductive and depraved. The otherworldly nature of these temptations provided rich inspiration for artists, and the subject is a common art historical theme—portrayed by Michelangelo, Hieronymous Bosch, Matthias Grünewald, and Paul Cézanne, among others. The biblical story appealed to the surrealist imagination as well, and in addition to Dalí, fellow surrealists Leonora Carrington, Paul Delvaux, Max Ernst, and Dorothea Tanning answered the Loew-Lewin call for paintings. Ernst’s depiction of St. Anthony won the prize—it filled the big screen for 10 seconds near the end of The Private Affairs of Bel Ami, a glaring splash of color in an otherwise black-and-white film that was described by The New York Times movie critic Bosley Crowther as “downright nauseous” and looking “like a bad boiled lobster.”

Although it did not win the contest for which it was created, Dalí’s The Temptation of St. Anthony went on to become the best known of the entries. Rather than focusing on the Christian monk, the artist’s dreamscape spotlights the creatures sent by the devil to tempt or torment him. A muscular, rearing horse and a parade of elephants with spider-like legs dominate the composition and tower over the relatively small figure of St. Anthony, who kneels in the bottom left-hand corner of the painting. The biblical subject notwithstanding, erotic imagery pervades the scene, with nude women and phallic architectural structures displayed on the elephants’ backs. Typical for Surrealism, Dalí leaves the conclusion of the story ambiguous—does the horse buck out of fear of the Saint’s piety, or is it about to trample him?

Dalí’s only known competition piece, The Temptation of St. Anthony continues to delight museum audiences. Stop by to see it while it’s still in L.A.!

On view in the Ahmanson Building, Level 2, through late February 2018.