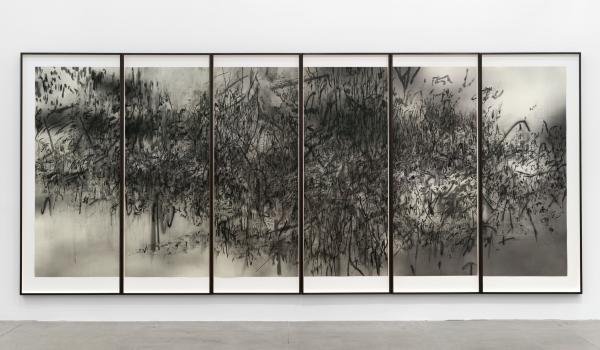 Julie Mehretu is a Harlem-based painter known for her large-scale abstract canvases. Her painting techniques range from precisely drawn lines and layering of different elements and media to brushed, scratched, and rubbed marks and balletic gestures of varying weight and viscosity. While her earlier work featured architectural and graphic elements, geographical schema, and plans for public spaces, her more recent work tends toward bold, gestural canvases with figurative elements layered into pixelated, printed, sprayed, and drawn marks and images. These abstractions reflect that which is both deeply embedded and constantly fluctuating in human consciousness. A recipient of the U.S. State Department's National Medal of Arts (2015) and a MacArthur Fellowship “genius grant” (2005) among other awards and honors, Mehretu’s art continues to awe viewers by delineating and expressing the complexities of our civilization in all of its chaos and beauty.

Playing a central and essential role in Mehretu’s practice since the late 1990s is her consistent work in printmaking, which has informed her paintings and drawings as well as set new standards in both technical and aesthetic innovation in the medium. Epigraph, Damascus (2016), printed with Niels Borch Jensen in Copenhagen, is a monumental six-panel work that rivals the stature of Mehretu’s paintings in scale, scope, and significance. Using photogravure, a 19th-century technique that fuses photography with etching, Mehretu created the foundation of the print from images of architectural drawings of buildings in Damascus, Syria, which were then composited together with a layer of gestural mark-making made on large sheets of mylar. Mehretu then worked a second plate using her characteristic variety of dark-yet-soft and light-handed brushstrokes and marks executed in aquatint (using sugar lift and spit bite) and, for the first time, open bite (which results in the large mottled areas of the image) directly on the copper plate. “This process of layering mark over image over mark,” explains LACMA Prints and Drawings curator Leslie Jones, “requires an astute familiarity with printmaking and here results in an accomplished fusion of dexterous line drawing with fluid and spontaneous mark-making.”

An expansive and complex work, Epigraph, Damascus marks a return to the architectural diagrams characteristic of Mehretu’s early work, but now overlaid with an unprecedented array of marks—a fusion of past and present that, in the context of Syrian history, resonates with the regrettable reality of history repeating itself. But Mehretu also describes her works as “story maps of no location,” manifestations of the imaginary, creating new readings, meanings, and narratives. While 20th and 21st century sites of war, protest, migration, and violence around the world have served as a point of departure and reflection, these compositions also speak to a nexus for the history of humankind, painting, and abstraction.

Epigraph, Damascus joins a print by Mehretu, Local Calm (2005), and a painting, Untitled (2012), in LACMA’s collection, and would be a featured work in her highly anticipated mid-career survey, Julie Mehretu, co-organized by LACMA and the Whitney Museum of American Art, opening at LACMA in November 2019.