The Bodhisattva of Compassion sits in Zen meditation, her legs crossed and eyes slightly opened in accordance with Zen practice. Her face is suffused with kindness. Her name is Kannon; the willow to her right signals that she is the Willow Kannon, evoking both her strength and flexibility. As with all Zen portraits, the face is the key element: while her body is brushed in quick, broad, almost light-hearted or humorous strokes, her face and hair are depicted in meticulous detail to highlight her compassionate expression.

This large and magnificent masterwork is by Hakuin, the greatest Zen Master of the last 500 years and also Japan’s greatest painter-monk. All Zen practice in Japan today descends from Hakuin’s unique methodology for instructing Zen students in their search for Enlightenment (Satori). Hakuin did not take up the brush until he was almost 60 years old; his entire body of work was produced between his 60th year and his death at 83. This work is from his prime “middle period,” when he was in his 70s.

While most existing Hakuin works are small and intimate, this one is huge and almost overwhelming in its impact. The spectacular gold, dark blue, and red antique woven-silk brocades that border the painting are exceedingly rare, because most Zen ink-paintings could not compete with such visual lavishness as a “frame.” But here, the painting itself is so strong, large, and compelling that this stunning border actually succeeds as a counterpoint. The 16-petal chrysanthemum highlighted in the blue-and-gold textile was formerly used only for the members of the Imperial family, which points to a possible Imperial provenance for this painting. That this 250-year-old artwork is in such good condition is a testament to how deeply it has been treasured for two-and-a-half centuries.

Hakuin’s Willow Kannon ranks among the finest of all extant Hakuin paintings and will be the key work in a proposed exhibition and book. 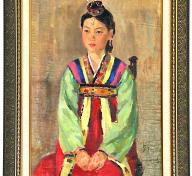