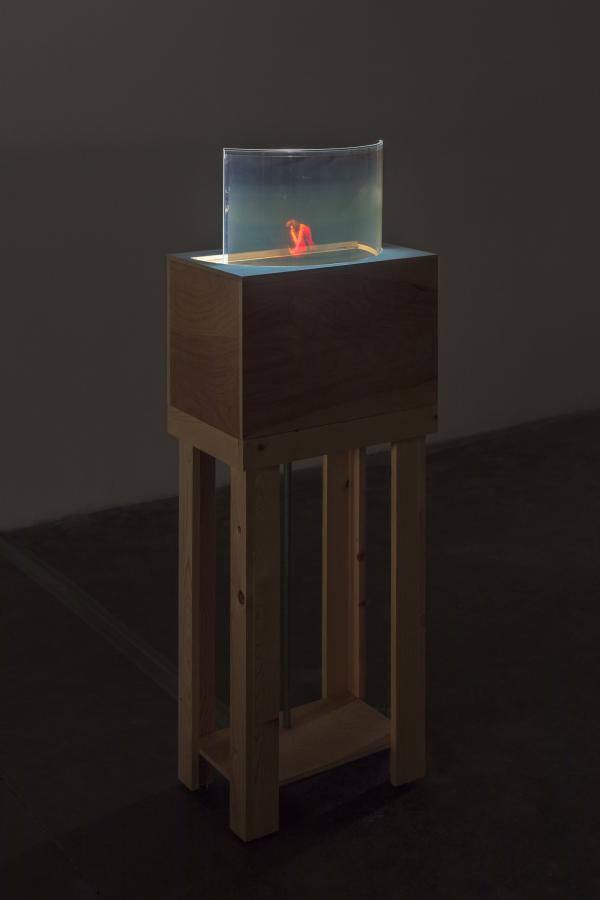 While living in New York in the 1960s, Simone Forti—the pioneering dancer, choreographer, and writer—developed a vocabulary of dances and movements that highlight and embrace improvisational actions over structured choreography. Forti's "Dance Constructions," as she titled these performances, meditate on kinetic sensation, natural movement, and everyday gestures. She considers these works to be attuned to living sculpture, often inviting spectators to walk around the performers to see them from all angles. This fascination with bodies and their movement in space led Forti to embrace the medium of holography as a means to capture some of her "Dance Constructions."

Holography, derived from the Greek word holos (whole) and gramma (message), is a cameraless and lensless imaging process which captures an entire light field around a form. Unlike a photograph or stereograph, a hologram appears to have depth from every vantage point. When we look at a hologram, it delivers to our eyes the very same light pattern that was captured in the recording: the same you would receive if you looked at the object in real life.

Creating a hologram involves splitting a laser beam into two, bouncing one beam off the surfaces of an object (the object beam), and crossing it with the other beam (the reference beam). This interference patterns of beams are then captured on a photochemical film. Once illuminated properly, the resulting image delivers a 3-D effect without glasses. This process was discovered in the 1940s by Hungarian-born engineer Dennis Gabor, though it was not until the 1960s, with the invention of laser technology, that Gabor's theory could be put into practice. 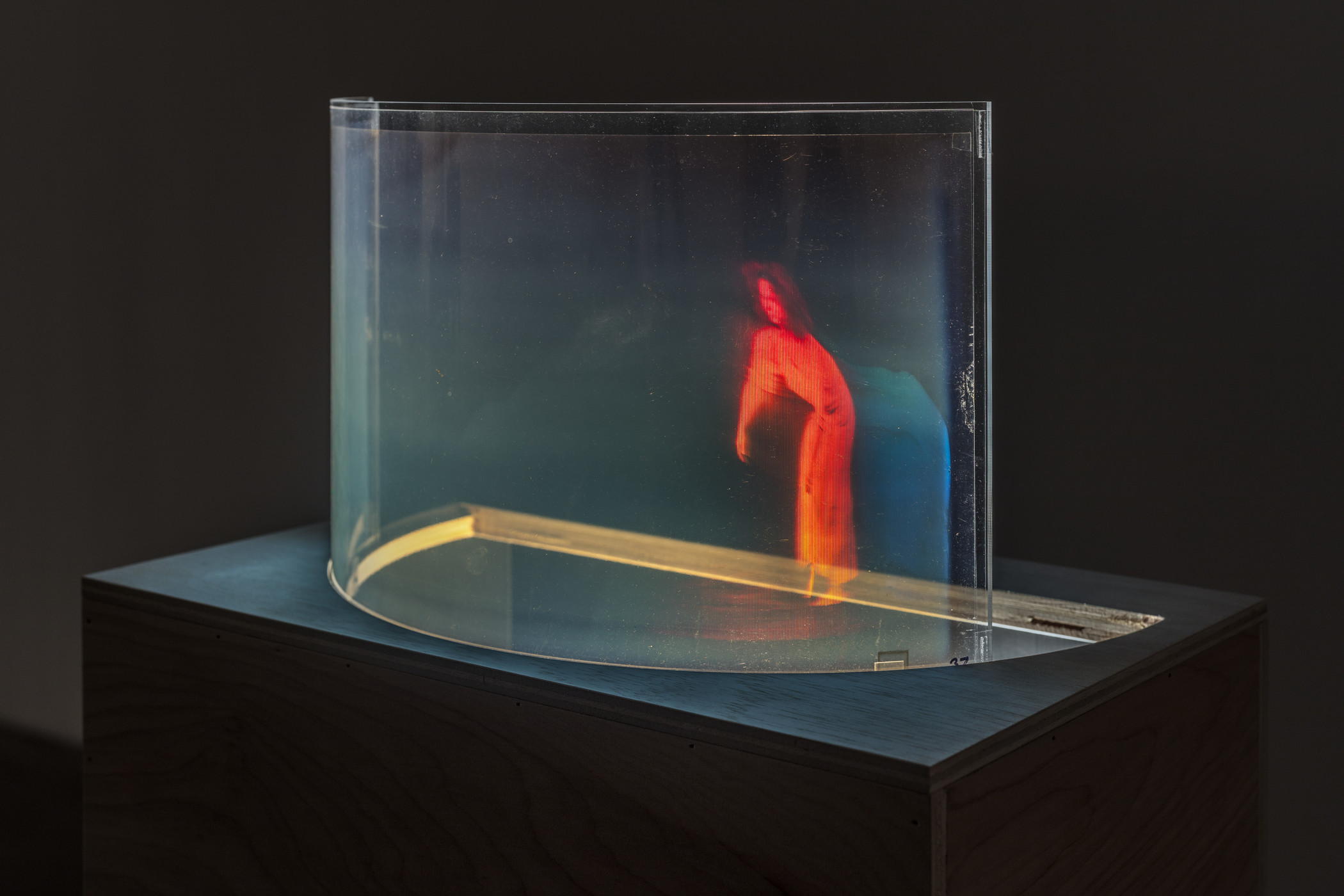 In 1976, Forti and her then-husband, Peter Van Riper, received a Special Projects grant from the National Endowment for the Arts to create a series of multiplex (or integral) holograms. Working with physicist and holographer Lloyd Cross, the process involved shooting a 35mm film of dancer(s) on a revolving platform, then making composite holograms of each frame and mounting them on a transparent cylinder. 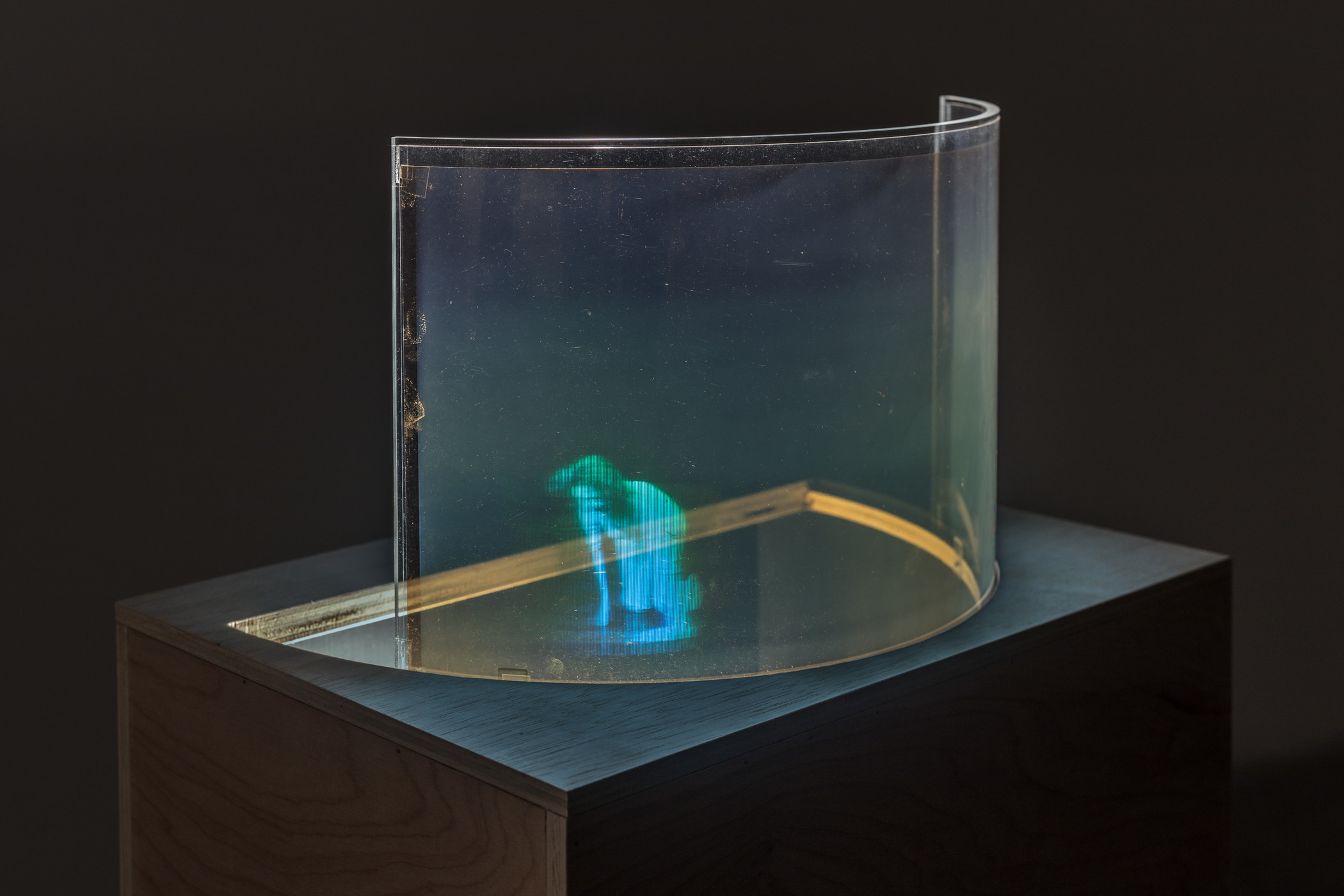 In Striding Crawling, we see a miniaturized Forti, depicted in a rainbow spectrum of color. To activate the hologram (to see Forti’s gestures playing out in succession), a spectator must move from side to side, almost mirroring the dancer's gestures. Beginning in a standing position at the right side of the hologram, the Forti figure slowly slouches to a crawl as the viewer reaches the left side of the piece. The figure morphs from one position to the next in a progression that is fluid, yet alien. Caught between two moves, her gestures blur, creating a holographic blur; a “time smear.”

The images in Forti’s multiplex holograms “are not at all stylized,” as she later recalled, “but all about the body organizing itself to fulfill a necessity. I have often felt that dancing makes it hard to really see the body because it is moving around in so many ways and directions.” More than documents of her “Dance Constructions,” Forti’s holograms became dancers themselves when she installed and interacted with them in performance spaces.

The hologram Striding Crawling (1976–78), was recently acquired by LACMA and is currently on view in the exhibition 3D: Double Vision in the Art of the Americas Building through April 1, 2019.