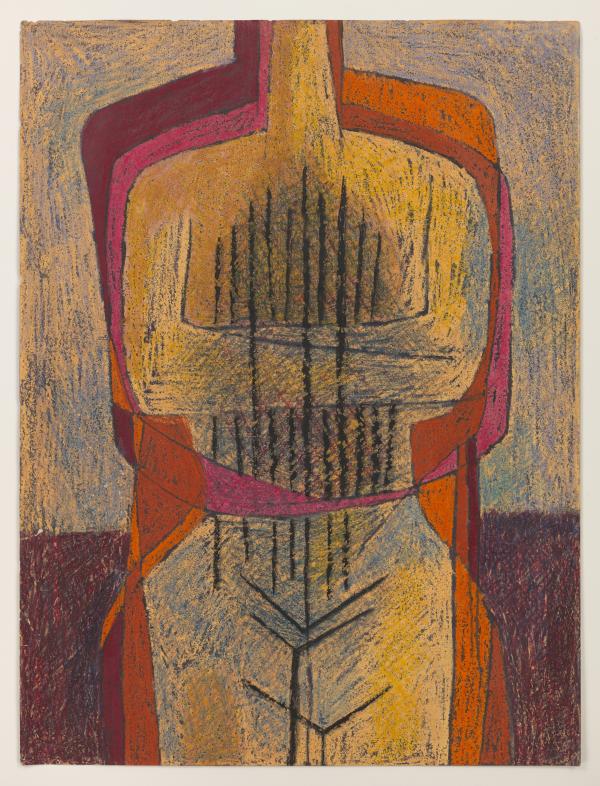 Untitled, c. 1951, is an exquisitely rendered crayon and ink drawing by 98-year-old artist Luchita Hurtado. An important early work by the artist, this drawing—along with the majority of Hurtado’s creative output over the last seven decades—has only recently come to light, having been kept in storage and out of public view for most of her life. As the New York Times reported in January 2019 regarding the attention she is now receiving, “Hurtado has recently experienced a rise to fame that has been thrilling to witness—albeit maddening in its lateness.”

Born in Venezuela in 1920, Hurtado moved to New York at the age of eight. An independent spirit from a young age, she chose to attend the all-girls Washington Irving High School in Manhattan in order to study art. By her early 20s, she had already begun making art consistently, a habit she later described as “a need, like brushing teeth.”

In its formal composition, Untitled appears to reference the folded arm figurines characteristic of Cycladic art made between roughly 3300 and 2300 BCE. Whereas Cycladic figures were typically produced in marble, with expressionless faces and simplified bodies, Hurtado omits the head and legs of the figure in her drawing, and enlivens the form through her dynamic use of layered, contrasting colors. As with many of her drawings from this period, Hurtado executed Untitled by layering water resistant crayon with washes of ink—a technique that allows the intensity of her mark-making to come into sharp focus.

Hurtado’s late-career acclaim is all the more striking given her remarkable life story. After her first husband, a Chilean journalist, abandoned her and their two young sons, she supported herself by working as an illustrator for Condé Nast in New York, while moving in an artistic circle that included Rufino Tamayo, Isamu Noguchi, and Wolfgang Paalen, who became her second husband. Hurtado lived with Paalen for several years in Mexico, but after the death of her son Pablo from polio, she moved to California, eventually separating from Paalen and marrying artist Lee Mullican. In 1951 the two settled in Santa Monica (where Hurtado still lives), raising two sons together, one of whom is well-known contemporary artist Matt Mullican. Lee Mullican, who died in 1998, was the subject of a career retrospective mounted by LACMA in 2005.

Considering that she was the wife, mother, and friend of prominent artists (others included Frida Kahlo, Agnes Martin, and Robert Motherwell), it may seem incomprehensible that Hurtado’s prolific artistic production remained mostly unknown to the public for so long. Yet for much of her life, Hurtado worked almost exclusively in private, recounting that she would often turn her paintings to the wall, reluctant to show them even to friends and family. Only now that the breadth of her career is finally coming into public view (her work will be the subject of a career retrospective at the Serpentine Galleries in London in May 2019) can art historians and critics fully appreciate the formal innovations Hurtado brought to her artwork over the decades.