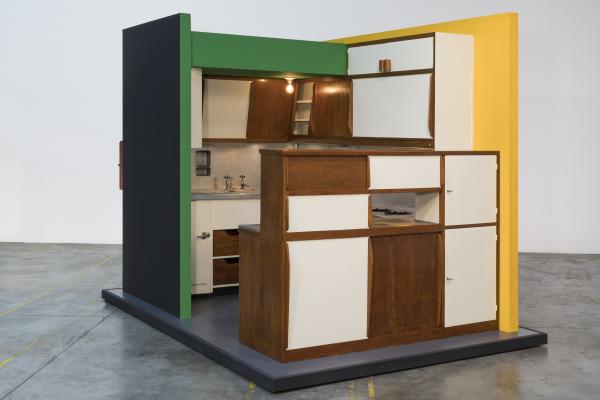 One of the most innovative furniture and interior designers of the 20th century, Charlotte Perriand devoted her long career to providing affordable settings of comfort, beauty, and ingenious economy of space. She declared: “The extension of the art of dwelling is the art of living,” an approach that marked all her endeavors, none more so than with this kitchen designed for Le Corbusier’s Unité d’Habitation in Marseille.

Commissioned in 1945, L’Unité is among the most important housing developments in post-war Europe, where the housing shortages caused by massive bombing gravely challenged economic rebuilding efforts. It received UNESCO’s World Heritage designation as “a major prototype of a new housing model based on a balance between the individual and the collective.” This radical experiment was designed as a middle-class “vertical garden city,” housing 1,600 people in 337 apartments. The tower block incorporated communal facilities for shopping, eating, exercising, and gathering.

Most of the apartments contained the Perriand kitchen, the result of decades of pioneering research and passionate commitment to social housing, mass production, modularity, and harmonious integration of spaces, both in her own practice and working with Le Corbusier. He had hired her in 1927 to oversee furniture and interiors—the only woman in the atelier. Theirs was a truly symbiotic relationship: for example, while she absorbed his philosophy of functionalism together with his technical expertise and color theory, she added a focus on aesthetic pleasure and human comfort, modulating his strict austerity. As the sole employee (of 100) who specialized in interior design, she played a major role in the firm as well as in the larger, equally male-dominated world of the French avant-garde.

Perriand left the firm in 1937 to set up on her own, spending the war years working in Asia. Upon her return in 1946, Le Corbusier asked her to take charge of designing the kitchens and apartment furnishings for L’Unité d’Habitation. Le Corbusier had declared, “the kitchen in Marseille should become the center of French family life,” and Perriand ensured that it also heralded a new, liberated role for women.

Based on ideas for a modern, labor-saving kitchen—developed by household reformers since the late 19th century—Perriand’s design took them further. The kitchen was modular, with built-in cabinets and advanced features for the time: an electric stove with an oven and fume hood, and a sink with an integrated waste disposal unit. Because L’Unité was designed for a middle-class clientele, an electric refrigerator would have been too expensive. However, the icebox was strategically installed to be supplied with ice delivered daily through the “interior street.” Work surfaces and walls were covered with aluminum sheeting to facilitate cleaning.

Perriand also designed a “kitchen-bar,” providing integration with the living areas. As she wrote, this open counter with its sliding doors for dishes below “allowed the mistress of the house to be with her family and friends while she was cooking. Gone were the days when a woman was isolated like a slave at the northern end of a corridor.”

LACMA is one of two museums in the United States to have a kitchen from the Unité housing project in its collection. Very few have ever come on the market, and this example is, by far, in the best original condition. Even more important, the kitchen gives us the rare opportunity to share with the public the mid-century revolution in women’s social roles that is even more relevant today. Perriand has been aptly called “the enlightened militant of post-war modernity.” With this kitchen in LACMA’s collection, we have an outstanding example of her vision to transform everyday life to an art of living.