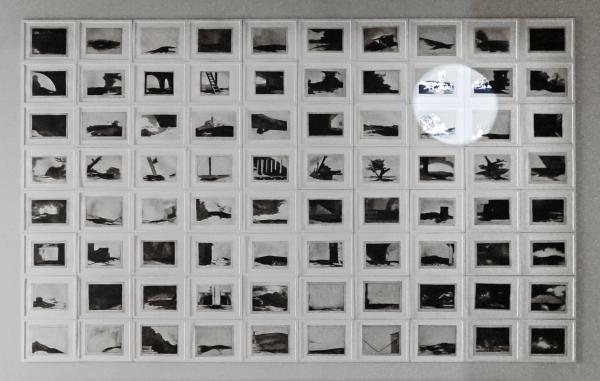 Farideh Lashai, When I count, there are only you…, But when I look, there is only a shadow, 2012–13, projection of animated images on a suite of 80 original photo-intaglio prints, gift of the 2019 Collectors Committee, © Estate of Farideh Lashai

New Acquisition: Farideh Lashai's "When I count, there are only you…, But when I look, there is only a shadow"

Farideh Lashai is one of Iran’s seminal modern artists. Trained in Vienna at the Academy of Fine Arts, and active from the late 1960s up to her death in 2013, she was multifaceted, working in painting, sculpture, and video. She was also a published poet and novelist (the autobiographical Shal Bamoo [The Jackal Came], 2003). She is known as well for translating Berthold Brecht’s work into Persian; indeed, imprisoned for two years in the early 1970s for her leftist views, she helped to pass the time by staging Brecht’s plays with other inmates as cast members. She is best known for her lyrical abstract paintings and especially her multimedia installations produced during the last decade of her life combining video projections and canvas or print works. The latter were influenced by Iranian and western literature, cinema, and 18th- and 19th-century European art.

When I count, there are only you…, But when I look, there is only a shadow, its title alluding to T.S. Eliot’s poem “The Waste Land,” was inspired by Francisco de Goya’s print series The Disasters of War (1810–20). Goya’s work is a suite of 80 aquatint plates in which he depicted mutilation, torture, rape, and other atrocities—performed, indiscriminately, by both the French and Spanish during the Peninsular War (1808–14). Some of the captions to the plates such as “I saw it” and “This is how it happened” indicate Goya was eyewitness to events or recreated others’ accounts of the war and ensuing famine.

Created 200 years later, Farideh Lashai’s When I count, there are only you…, is a contemporary take on Goya’s grim message in which the remade prints were stripped of their figures, either enactors or recipients of violence. Devoid of their actors, each print becomes an empty stage onto which Lashai, through a spotlight-like video projection, reinserts the now-animated figures like the memories of atrocities relived. Set to the soundtrack of Chopin’s "Nocturne 21 in C minor," the prints and projection slip in and out of carnage, perhaps a reminder of the long Iranian war with Iraq (1980–88) or, more broadly, what we have complacently come to call "the war-torn Middle East." When I count, there are only you…, Lashai’s last work, updates for the viewer Goya’s take on the horrors of war and its aftermath. Her remarkable amalgam of prints, animation, and music, just as with the earlier suite of prints, still has the ability to shock us—even as the images remind us of more recent acts of inhumanity. We have seen these corpses and living skeletons too many times. Lashai, like Goya before her, provokes us to question the inhumanity, injustice, and senselessness of war.

In When I count, there are only you...the brilliant mixing of past and present, East and West, new media and old, parallels perhaps what LACMA does best as a world class encyclopedic art museum; but in addition to providing our visitors with the immeasurable experience and pleasure of great art, we are also called upon to offer enlightenment and spiritual solace as a reminder of our shared humanity. Lashai's work accomplishes this in spades.