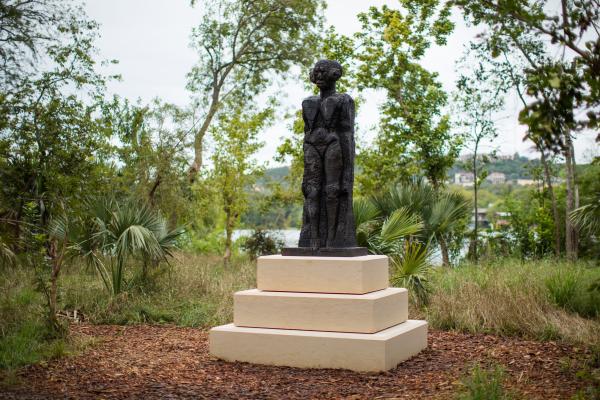 Huma Bhabha’s materials and forms are largely drawn from the urban residue and historical overlay of the two cities that she has occupied over the course of her life: Karachi and New York. Born in 1962 in Karachi, Pakistan, Bhabha moved to the United States in the early 1980s to study printmaking and painting at the Rhode Island School of Design. After a brief sojourn back to Pakistan, Bhabha returned to the U.S. to complete her Master of Fine Arts degree at Columbia University in New York. Active as an artist since the early 90s, it has been over the last two decades that she has risen in prominence mostly as a sculptor, notably through her Rooftop Garden commission at the Metropolitan Museum of Art (2018) and current mid-career survey at the ICA Boston.

Typically Bhabha works with humble, castoff materials such as recycled packing materials, tires, cork, and other industrial and consumer refuse, although in the last 10 years she has occasionally worked in bronze. God Of Some Things (2011) was one of two large-scale bronze sculptures that flanked the entrance to Bhabha’s first solo museum exhibition at MoMA PS1 in 2012. The sculpture highlights her interests in figurative sculpture and direct carving; the patinated bronze is cast from molds made from an original hand-chiseled piece of cork. Texturally, the sculpture gives the appearance of lightweight cork, and plays against the viewer’s expectation of the heft and permanence of bronze.

The columnar figure is ambiguous in many respects: female or male, god or human, ancient or modern—all classifications could be valid. As is typical of Bhabha’s approach, God Of Some Things draws from a vast repertoire of examples from art history and archaeology. The singed cork of the original carving has the quality of volcanic rock, and suggests that the sculpture may have emerged directly from the earth. Morphologically, Bhabha also finds inspiration in Alberto Giacometti’s lissome bronze figures, representations of the Egyptian deity Thoth as a baboon, the symmetry of 19th-century Fang reliquary sculptures, the jagged surfaces of George Baselitz’s wood forms, and designs of Hollywood science fiction monsters.

Bhabha’s sculptures have been described as artifacts from the future, as they could be the ruins of an ancient civilization or the creative outgrowth of an epoch yet to come. Drawn to the ways in which our 21st-century mega-cities can at times resemble archaeological digs, and to the breadth of resources that she finds in a sweeping view of historical and geographical art references, Bhabha’s unconventional materials and gestural approach rebuke the traditional role of monumental sculpture, which is typically solemn and heroic. God Of Some Things is not only indicative of Bhabha’s distinctive style and approach, but ample evidence of her broadly encompassing diasporic perspective.