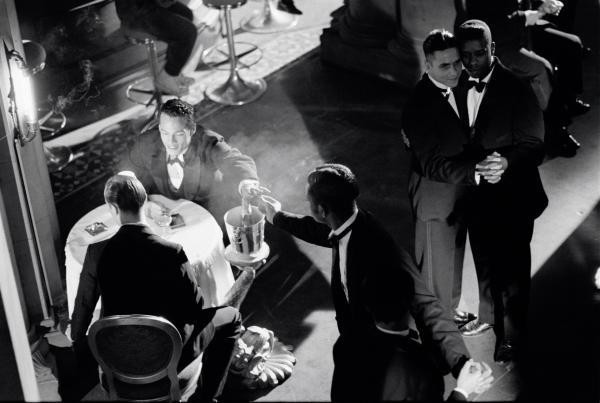 On the occasion of the exhibition Isaac Julien: Playtime, and in collaboration with the University of California, Santa Cruz, LACMA is hosting a symposium on May 18—a series of screenings, talks, and panel discussions with historians, scholars, and artists responding to five additional important films by Julien: Looking for Langston (1989), KAPITAL (2013), Western Union: small boats (The Leopard) (2007), Ten Thousand Waves (2010), and Lessons of the Hour (2019). The event is presented in cooperation with Los Angeles Filmforum.

The symposium will celebrate the 30th Anniversary of Isaac Julien's Looking for Langston, the award-winning film focusing on poet, social activist, novelist, playwright, and columnist Langston Hughes (1902–1967) and his fellow black artists and writers of the Harlem Renaissance. A founding member of the 1980s experimental film collective Sankofa, Julien made Looking for Langston when the AIDS crisis was at its height. Working with Nina Kellgren (cinematographer) and Sunil Gupta (photographer), Julien shot the film in the 1980s in London but set it in the jazz world of 1920s Harlem. His use of low-key lighting and sculptural smoke further complicate historical periodization, infusing the work with a 1940s film noir feel. The imaginative combination of epochs creates a kind of "creolization" of photographic forms as well as a potent and self-conscious timelessness. While Julien was directing the film, he paid close attention to the photographs of James Van der Zee, George Platt Lynes, and Robert Mapplethorpe, and it is possible to see a direct relation between images imbued with references to the history of 1930s black-and-white African American photography and 1980s Queer cultures.

Throughout his career, Julien has worked simultaneously with photographers and cinematographers to make still and moving picture artworks. Over the last 30 years, Julien has gained acclaim for his cinematic interrogations on the politics of blackness, queerness, gender roles, and the remnants of how colonial pasts inform contemporary society. Rather than represent the plights of marginalized communities in a traditionally naturalistic or ethnographic style, he uses the tools of Hollywood, the art market, and the “politics of the image” to elevate the representation of groups from multiple diverse perspectives and backgrounds.

The symposium will explore Julien’s work and ways to understand his practice in the contexts of contemporary art, cinema, and theory. Speakers include:

Isaac Julien was recently appointed a Distinguished Professor of the Arts at the University of California, Santa Cruz. Participating UC Santa Cruz film and digital media professor, B. Ruby Rich, will be speaking with Julien after the 2 pm screening of Looking for Langston. “I'm looking forward to my conversation with Isaac on the LACMA stage," Rich says, “and to looking back to the beginning of his career and the promise that was there, even then, of his brilliance, fearlessness, aesthetic originality, and political nuance."

Isaac Julien's Playtime is on view at LACMA through August 11.

The Isaac Julien: Playtime Symposium is presented in collaboration with the University of California, Santa Cruz and in cooperation with Los Angeles Filmforum.