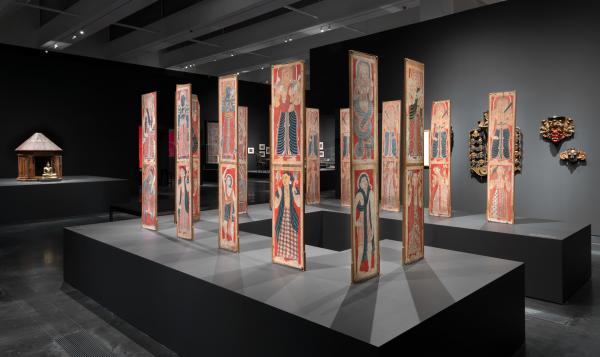 Architectural Panels from a Buddhist Temple

Sri Lankan Buddhist practices often involve honoring various deities who were originally assimilated from popular, folk, and Indian traditions in order to undergrid Buddhism's relevance to the everyday lives and goals of worshipers. Unlike monks, the vast majority of the faithful do not seek nirvana—escape from the endless cycle of rebirth—but instead seek protection and benefits in their present lives, and the gods found throughout Buddhist temple complexes in Sri Lanka aid their efforts. Among the figures often depicted on architectural panels are the Brahmanical gods such as Indra, Vishnu, and Ganesha, among others, and astrological deities known as navagrahas (nine siezers, or influencers), whose origins in India are related to notions linking planetary bodies with human fates. Likely used as door or window shutters, these panels on display in The Jeweled Isle: Art from Sri Lanka, are painted on both sides, depicting images of demons and male and female attendants on the lower registers, and a number of identifiable gods and deities on the upper registers. 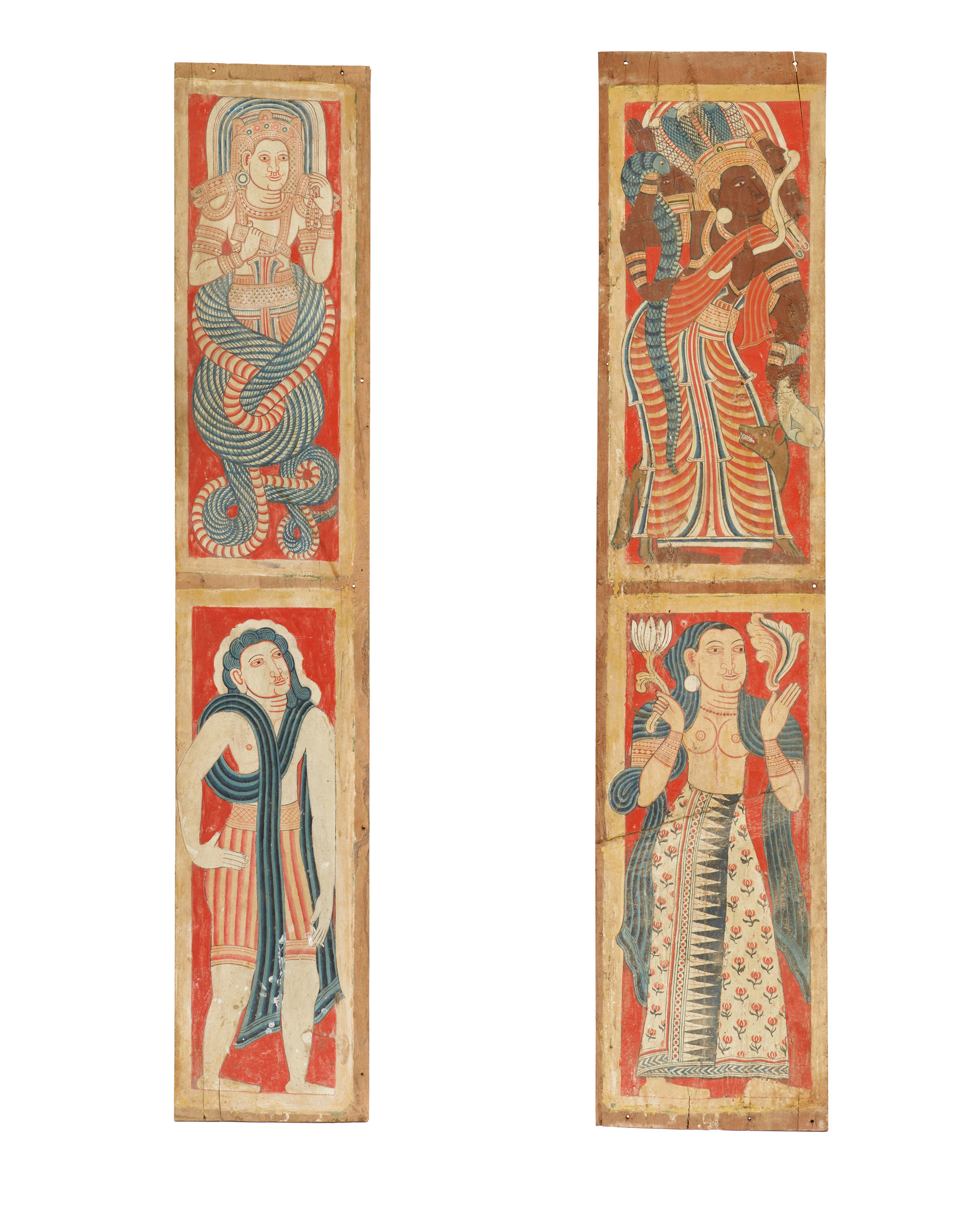 Ketu, whose lower body is that of a serpent, represents the astronomical point known as the descending lunar node. At this point, the moon—traveling in a southerly direction—crosses the sun's path, causing an eclipse. Ketu is often shown with Rahu (representing the ascending lunar node). According to myth, shortly after the creation of the universe, a serpent demon attempted to steal the elixir of immortality. Surya (Sun) and Chandra (Moon) reported this to Vishnu; he severed the creature in half, giving rise to Ketu and Rahu. The two demons are considered shadow planets, chasing the sun and moon in eternal vengeance. Ketu is represented twice among this set of panels, which suggests they come from different structures. In the panels above, Ketu carries a manuscript and prayer beads while Rahu is accompanied by a dog and carries a fish, a snake, and a bow. 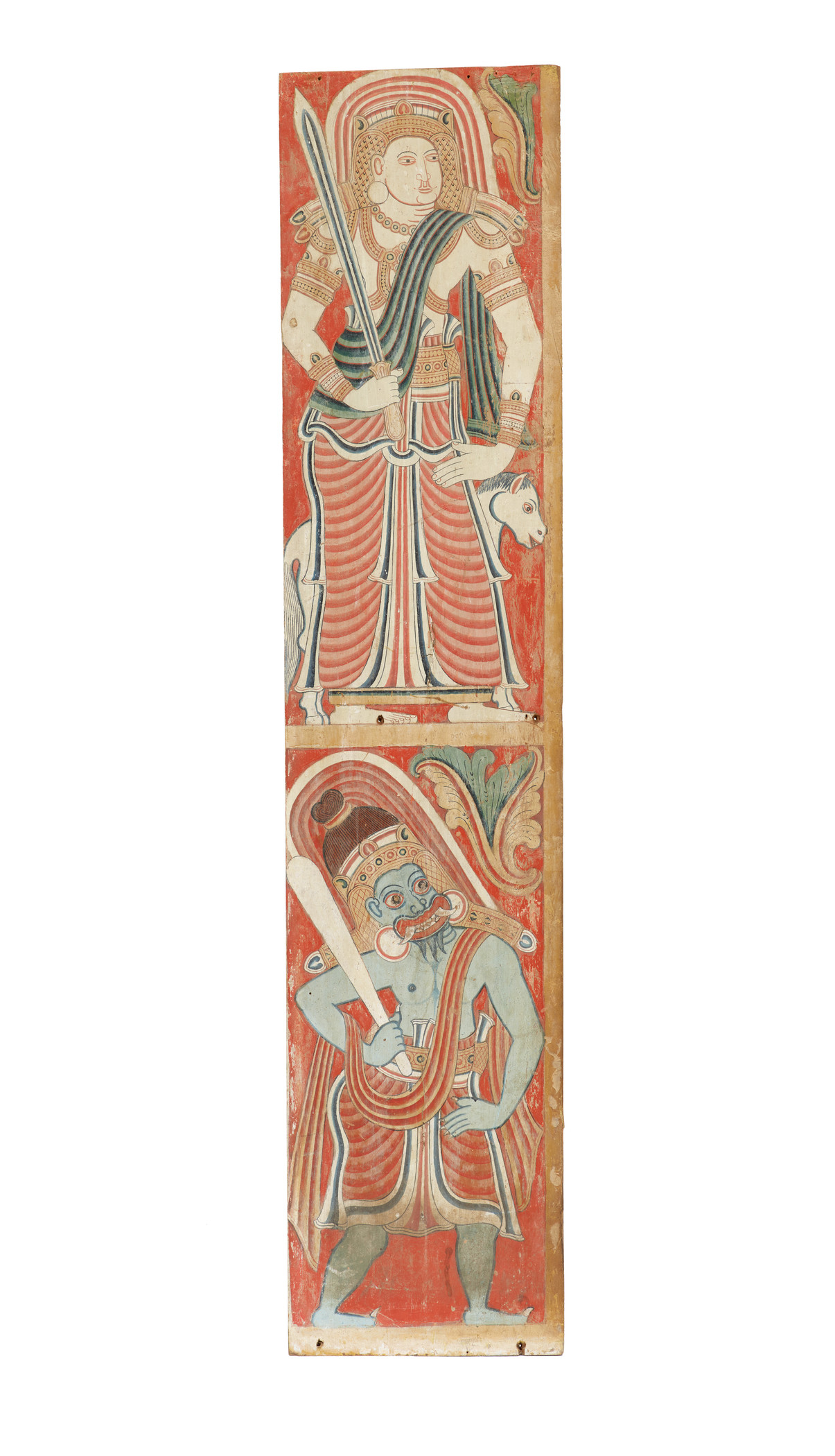 Aiyanar is a god whose origins reside in Tamil Nadu, in South India, where he had long been worshipped by Hindus as a protector of villages. Often shown with a sword and horse, he is considered a powerful guardian diety by Sri Lankan Hindus and Buddhists. His identification here is tentative, as several deities among these panels are quite similar in appearance, though most lack a horse.

Visit The Jeweled Isle: Art from Sri Lanka, on view in the Resnick Pavilion through July 7, 2019 to learn more about these panels and the deities they depict.