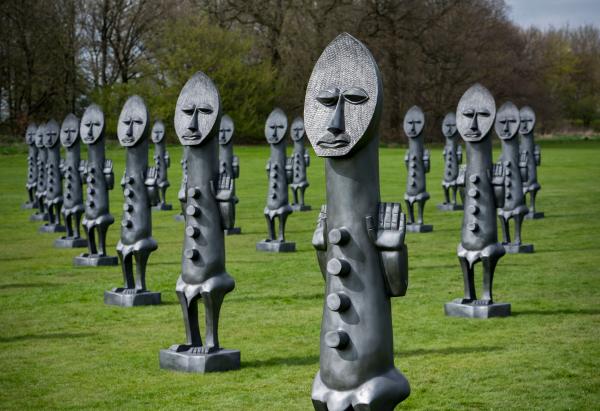 Opening Soon! The Invisible Man and the Masque of Blackness

Zak Ové (born 1966, London) is a British visual artist of Trinidadian and Irish descent who works in sculpture, film, and photography. His monumental sculptural installation, The Invisible Man and the Masque of Blackness, encapsulates the complex history of racial objectification and the evolution of a black subjectivity. The installation’s formation of 40 graphite African figures—serial reproductions of a wooden original received during Ové’s childhood as a gift from his father—stand tall and dignified to represent the strength and resilience of the African diaspora, and its various manifestations across the Americas, Europe, and the Caribbean.

The work’s titular references—Ben Jonson’s 1605 play, The Masque of Blackness, and Ralph Ellison’s 1952 novel, Invisible Man—mark two milestones in black history: the former, the first stage production to utilize blackface makeup to depict race, and the latter, the first novel written by an African American to win the National Book Award for Fiction. The roughly 350-year gap between these titles, therefore, illustrates the slow pace of change while simultaneously celebrating how far society has come. In addition to referencing literary forms of black expression, Ové’s oeuvre often draws inspiration from Caribbean Carnival, an annual festival that found its origins in the Mardi Gras celebrations of the region’s French-Catholic plantation owners in the 18th and 19th centuries. The enslaved people in the region created their own parallel celebration, Canboulay, in which they were able to express their creativity and pain through music and costume, as well as pay homage to their African traditions. In the artist’s words, “the process of transfiguration [was] used as a tool of emancipation for a downtrodden people to resurrect themselves from their colonial disposition.” The emergence of calypso—a genre of Afro-Caribbean music whose songs often convey political messages—can also be traced back to the ritual of Canboulay.

Join us for an afternoon of art, music, and discussion with Zak Ové on Sunday, July 28. A calypso performance by Trinidad Steel Drum Band will begin at 4 pm, followed by a Q&A with the artist at 5 pm. The Invisible Man and the Masque of Blackness will be on view in the B. Gerald Cantor Sculpture Garden from July 27 through November 3, 2019.