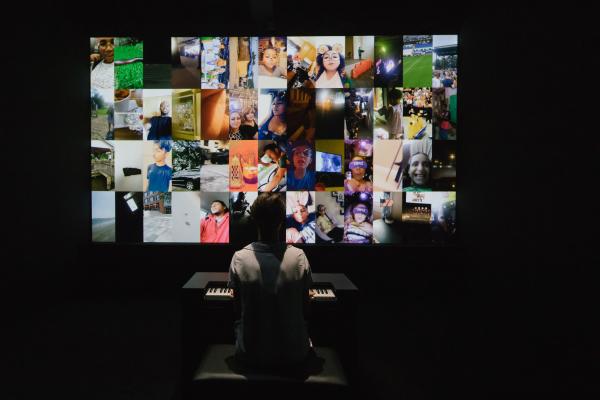 This week, we welcome a new exhibition to LACMA—Christian Marclay: Sound Stories.

Over the past 35 years, Christian Marclay (United States, b. 1955) has explored the fusion of art and audio cultures. Trained as an artist and self-taught as a musician, Marclay considers sound and musicality integral to his practice. In the 1970s he began using record turntables as musical instruments, creating compositions with loops, skips, and scratches. Since then, he has made musical recordings, prints, sculpture, performances, and video works that incorporate strategies of montage, improvisation, and appropriation. In 2010, Marclay premiered The Clock, a 24-hour single-channel montage constructed from moments in cinema and television history that depict the passage of time. Acquired by LACMA in 2011, The Clock has become a signature work in the museum's collection.

In Sound Stories, Marclay again fuses art and technology, using Snapchat videos as his raw materials. A collaboration between the artist and Snap, the project draws on the sounds and images of everyday life found on the multimedia messaging app Snapchat. Using algorithms created by a team of Snap engineers, Marclay experimented with millions of publicly posted Snapchat videos to create five immersive audiovisual installations, two of which are interactive. Rooted in a sampling aesthetic fundamental to Marclay's work, these installations respond to the storytelling available on Snapchat and visitors' sounds and movements in the gallery space.