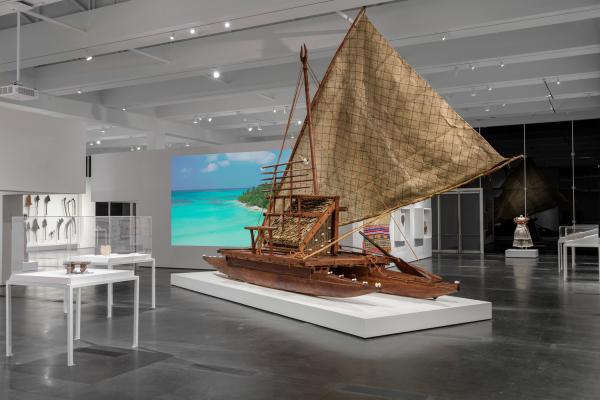 Highlights from “Fiji: Art & Life in the Pacific”

The exhibition was organized and curated by Professor Steven Hooper, Dr. Karen Jacobs, and Ms. Katrina Igglesden at the Sainsbury Centre in Norwich, England, where it was on view October 15, 2016 through February 12, 2017. The exhibition has been reformatted for the presentation at LACMA, with additional major loans from U.S. collections. The exhibition at LACMA is curated by Nancy Thomas, senior deputy director, art administration and collections at LACMA, with support from the organizing curators.

Fiji: Art & Life in the Pacific showcases the range and quality of artworks from the past two centuries and highlights the skill and creative adaptability of the artists and craftspeople who made them. The exhibition is organized in eight thematic sections, including: Voyaging, Fiber and Textile Arts, Warfare, Embodying the Ancestors, Adorning the Body, Chiefly Objects, Respecting the Ancestors, and Fiji Life. 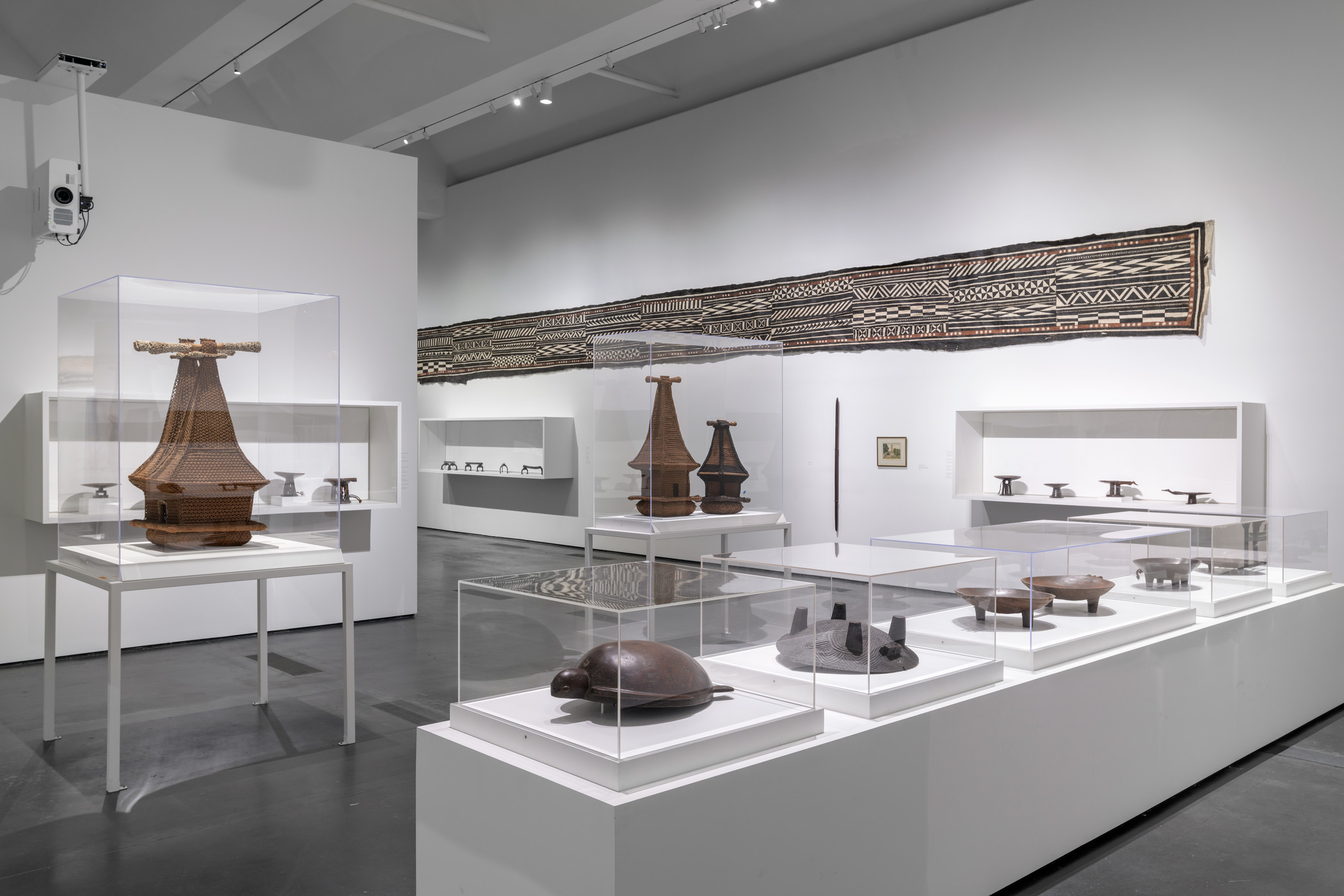 Religious observance in the early 19th century focused mainly on divine ancestors to whom temples were dedicated rather than creator gods, as found in many other areas of the world. In Fiji there was a direct correlation between divine power and phenomena that affected human life, such as rain, drought, crop fertility, and especially illness. Accordingly, there was a very practical aspect to Fijian ritual, which involved prayers, chants, sacrificial offerings, obeisance, and other forms of worship in order to please the gods and elicit from them desired outcomes. The exhibition features model temples which duplicate the architecture of full-scale temples and were possibly taken as portable shrines on canoe voyages. They are made of great lengths of coconut-husk-fiber cordage and their elaborate construction was a form of sacrifice and skilled sacred work. In pre-Christian ritual, yaqona was made in concentrated form for consumption by priests, who sucked it through a reed tube from a shallow dish, some of which had elaborately carved pedestals. A wide range of these dishes are included in the exhibition, along with rare anthropomorphic bowls presenting human or animal-like characteristics.

Fiber and textile arts were and remain today a significant aspect of Fijian culture. Masi is the Fijian word for the paper mulberry tree as well as for the cloth made from its inner bark. To produce it, the bark is stripped from young tree saplings and the inner bark is separated and soaked in water. The bark is then beaten into thin sheets, layered and folded and joined to make cloths of any size. Masi can then be decorated by stenciling, rubbing, or painting. Large presentation cloths have been made for investitures, weddings, or state gifts. A striking three-piece barkcloth attire, an example of which is on view in the exhibition, could be worn by both men and women on important ceremonial occasions. Other textile arts included elaborate woven mats, which could be used as prestige gifts; as well as rectangular baskets and fans which showed off virtuoso weaving techniques and served as popular exchange items. 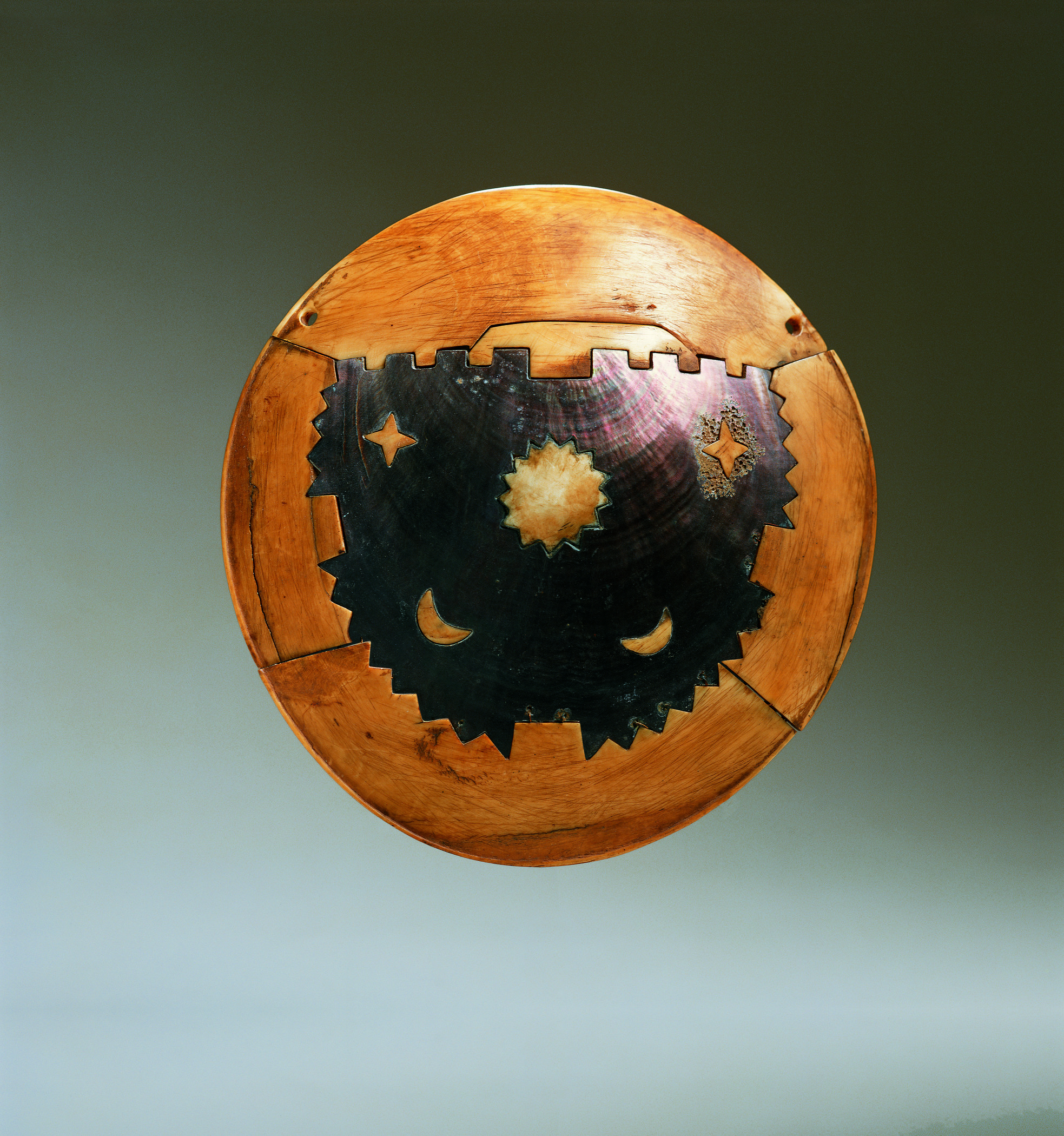 Adorning the body was an aspect of Fijian ceremony and expression and included necklaces, pendants, and other precious wares. Key forms of personal ornament shown in the exhibition are whale-ivory and pearl-shell breastplates, valued for their subtle design variations and alluring reflective and color properties, which were suited for chiefly wear. Fijians themselves did not hunt whales, but obtained teeth from sperm whales stranded on local reefs and beaches and from European traders in the 19th century. As a result, whale ivory was the basis for many other forms of “valuables,” retained or gifted at events or occasions of social exchange. Sperm whale teeth were sawn vertically and horizontally to produce thin “tusks” which were strung closely together to create striking necklaces.

The exhibition also presents a remarkable display of period photographs from Fiji. Nineteenth-century photographs of the Pacific were produced by foreign travelers, commercial entrepreneurs, and professional photographers, most often men from New Zealand, Australia, Canada, and Britain. Works in this section come from LACMA’s extensive collection of Pacific photography, which includes several hundred photographs, albums, cartes-de-visite, and stereographic photos of Fiji. Many images are examples of staged studio portraiture—they capture traditional dress, weapons, and hairstyles, yet impose a colonial perspective on the sitter. Additional images document landscapes and architecture or feature aspects of daily life. As photo archives are digitized and more widely shared, it is anticipated that continuing research will help others find the relatives of original subjects, to reclaim details of lost traditions, and to communicate the rich history of the region.

1 comment
Francisco george says:
I was “educated” by the labels of who loaned the objects to the exhibition, and who owns them and collect them,
I encourage U to read and think,
This is a culture that was abolish by the colonizers and the Catholic Church and the remnants of their culture collected by elite American collages.
I was overwhelmed with sadness