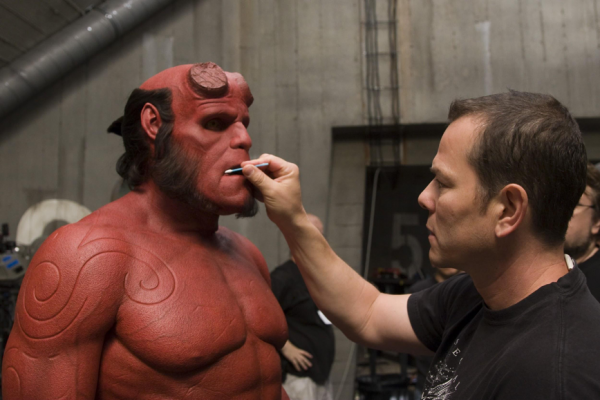 The first thing visitors see upon entering the lobby of Guillermo del Toro: At Home with Monsters is a costume of the Angel of Death from Hellboy II: The Golden Army (2008). With its large wings, taloned hands, and a flat, stone-like crescent where its eyes should be, it is a monster that seems almost biblical or prehistoric; along the ridge of its wings a dozen eyes stare out. The initial concept for this haunting creature sprang from the mind of director Guillermo del Toro, who originally sketched it in one of his notebooks. However, it was Mike Elizalde and the team at Spectral Motion Incorporated, a leading special effects studio, who gave it texture and brought it to life.

Mike is a master of practical special effects. He has worked on over 80 films, making creatures over a span four decades for such films as Blade II (1998), Hellboy (2003), Pacific Rim (2013), and, most recently, the television show Stranger Things (2016). He was nominated for an Oscar for Hellboy II: The Golden Army (2008). In 1994 Mike and his wife, Mary, founded Spectral Motion, which specializes in prosthetic makeup, animatronics, puppets, art installations and practical effects. Above all else, they make incredible monsters.

When did you first meet del Toro, and how did your working relationship begin?

It was while I was working on Blade II. I was hired to build animatronics for the vampire puppets, the “Reapers.” I was building eye mechanisms at my workstation and Guillermo walks over and looks at the components. He was very complimentary and immediately made me feel really important. I got a big, powerful, Guillermo hug from him. We hit it off right away and became fast friends. Later, there was an opportunity to work on Hellboy, and he and his producer said, “We want to do this with you, go open a company.” So Spectral came out of that.

What were some of your earlier experimentations with special effects and practical effects? When and how did you start?

I didn’t have a great childhood; it was very humble beginnings. I didn't have a lot of resources. I went to public school in Compton, at Frances Willard School. Like every school, they had easels with water-based paints. The first few times I made these paintings, I thought, “you know, if I get the paint wet, it reconstitutes. I can use the colors.” I purposely made a palette that I could use at home later. I used a lot of yellow, lots of green, big splotches of color that I could reconstitute at home with water. That is how I first started doing makeup on myself. I was innovative with what I had available. Elmer's glue and oatmeal. All sorts of stuff that I started playing with and working with on my own face. I didn’t have access to books, like Dick Smith’s book or any of the do-it-yourself stuff that was available. But I did have friends who had books and libraries, of course. I was able to find resources that way and experiment at home.

I would go for the universal monsters. That’s what I wanted to be. I couldn’t do Frankenstein’s monster because I couldn’t get my head square. But I could do Lugosi's Dracula. I knew how to paint and started to do highlight and shadow and make a widow’s peak….The first few vampire fangs I had were paper. 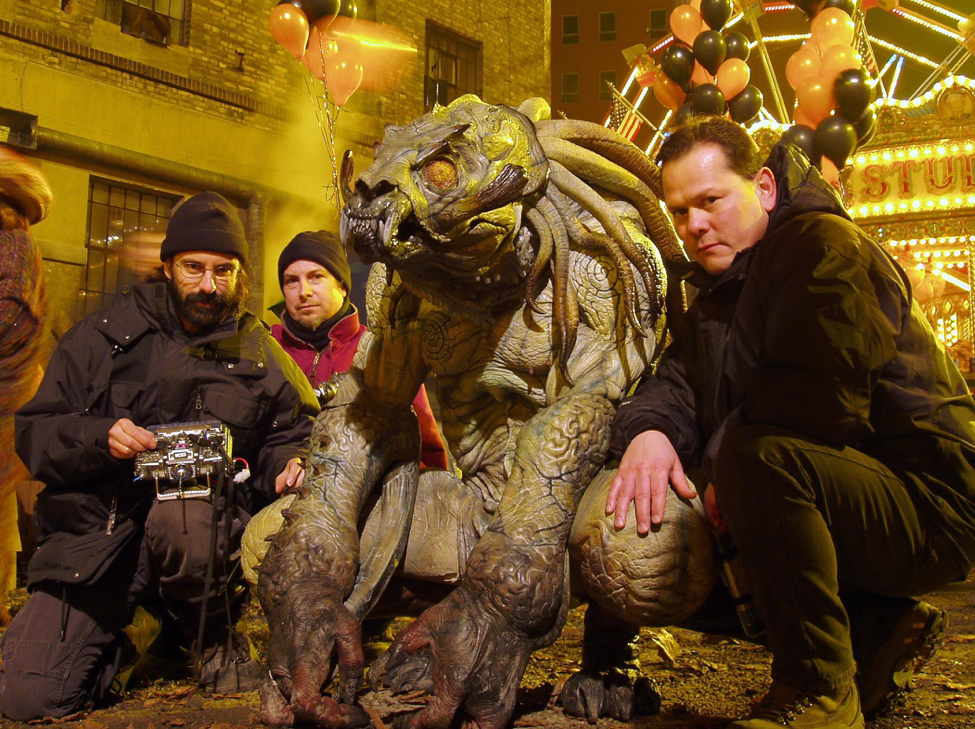 It is an impressive jump from being a kid and painting on yourself to actually realizing this was a career and that there was an industry. How did you get access to this world and find work in the established industry?

My hero is Rick Baker. Everything that Rick did, I followed closely. In fact, it was An American Werewolf in London (1981) that was the tipping point for me. After seeing Rick Baker’s work in An American Werewolf, I went to the library and looked for any books on how to do makeup effects and I found this one book—I couldn't believe my luck—it was the one book in the library that outlined the processes of how to create prosthetic makeup. The book was called Techniques of Three-Dimensional Make Up by Lee Bagen. I read it from cover to cover several times, and I began purchasing materials.

This was while I was in the Navy. I served in the Navy for eight years. I had this friend who was a dentist on the base, and I asked him if he could make dental impressions so I could make monster teeth. That’s how I started exploring and experimenting. Bagen’s book gave me the broad strokes. It didn’t teach how to sculpt or any specifics, but it did give you all of the main processes and materials to get it done. With the help of that book, I created several effects on myself and my friends, and I put a portfolio together. I sent it to all of the studios that I could find in the phonebook in Los Angeles...Of course, nobody responded. But I was not going to let that stop me.

Then I discovered that Dick Smith had a mail order course and that was tremendous. It was like the floodgates had opened. After the Navy, I came back to Los Angeles, and as an interim job, I was doing air conditioning installation. Meanwhile, I was looking for work as a makeup artist. Three months into my job, I was driving by a place in North Hollywood, and I saw life cast and molds in the alley and thought, “I better go check this out.” Parked my air conditioner van over and—I always had my pictures with me—and I knocked on their door. And they began looking through my pictures, and they called over the owner of the company, and they offered me a job on the spot. It was the right place, right time. It was called Magical Media Industries. It was the first job I had in Hollywood, and I never went back to air conditioner installation.

Not only was it fortuitous that I was hired so quickly but also working in this place was every artist in the industry that I was reading about in Fangoria (genre fan magazine). So I learned from the best, right out of the gate. 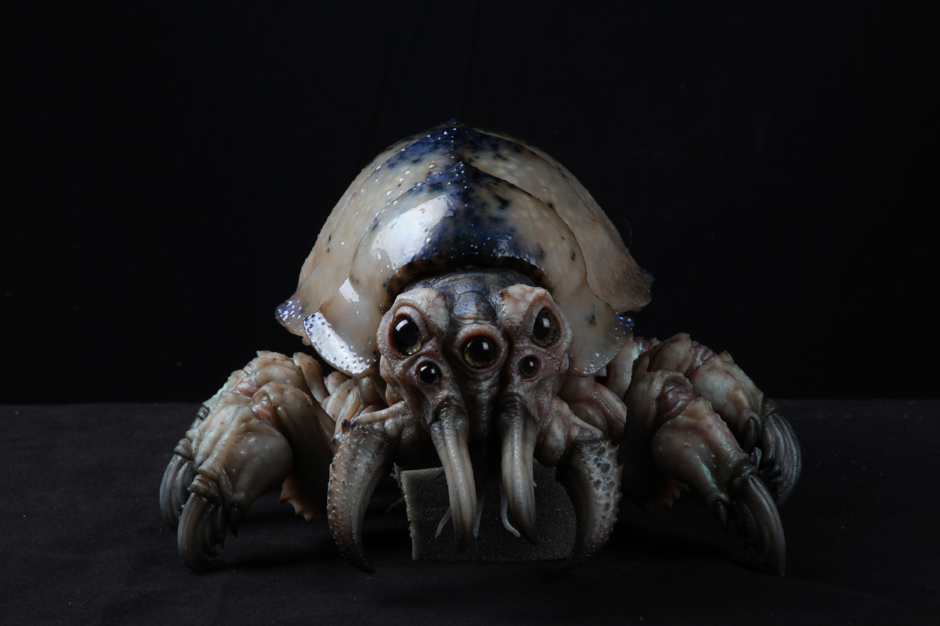 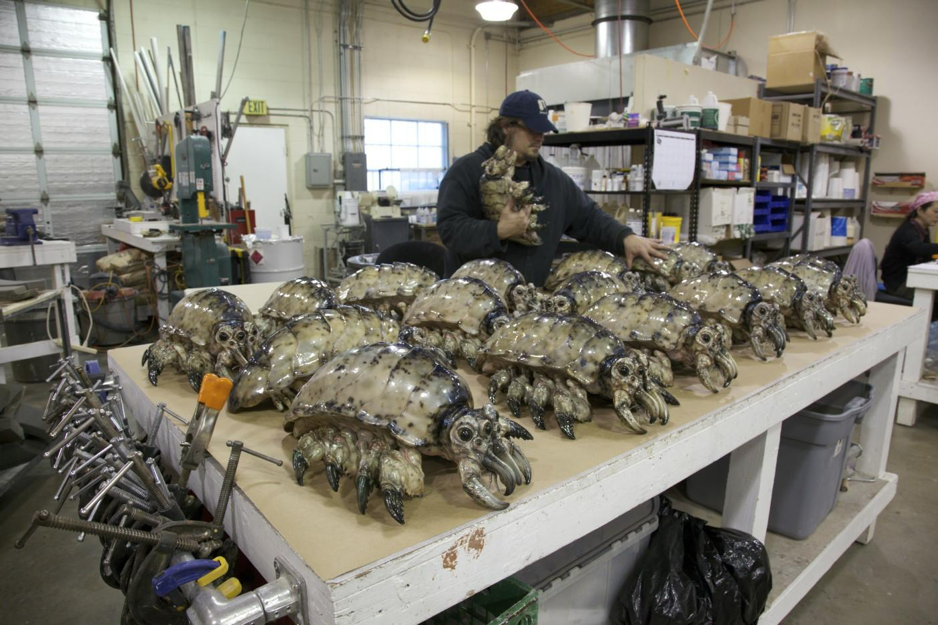 You are a “Magician Member” at the Hollywood Magic Castle. What drew you to magic and how has it influenced your work?

I became interested in magic around the same time I became interested in monsters, when I was little. I always enjoyed the effect of a well-executed magic and the feelings it inspires—wonder and curiosity. I watched magicians on TV and thought that was something I’d like to try. Monsters and magic were two loves in my life as a kid. They helped me cope with my situation; it was a tough time. My mom had emotional difficulties, and she wasn’t there for my brother and me. We had to figure out how to stay busy and entertained and continue to move in a positive direction. Monsters and magic were special and cathartic in my quest for peace and happiness.

Magic and special effects seem slightly antithetical to each other in that magicians like to keep their illusions secret, whereas in the special effects community, there appears to be a rich history of sharing tricks and information.

Within the community of magic, there is no secrecy or unwillingness to reveal. We show each other what we’re working on. We want to continue to move forward the art of magic. For the layperson, we think it’s better not to reveal the secrets, because it kills the illusion. People are curious to know how it’s done, but in the end, they don’t care. Magicians care; we want to know how it’s done and expand our repertoire. In our community of special effects, we take knowledge and technology from one shop and take it to another, and it keeps growing and evolving. I have a hard time drawing a line between the two sometimes. When you talk to special effects artists, there are a lot who are amateur magicians. We embrace creating an illusion one way or another. 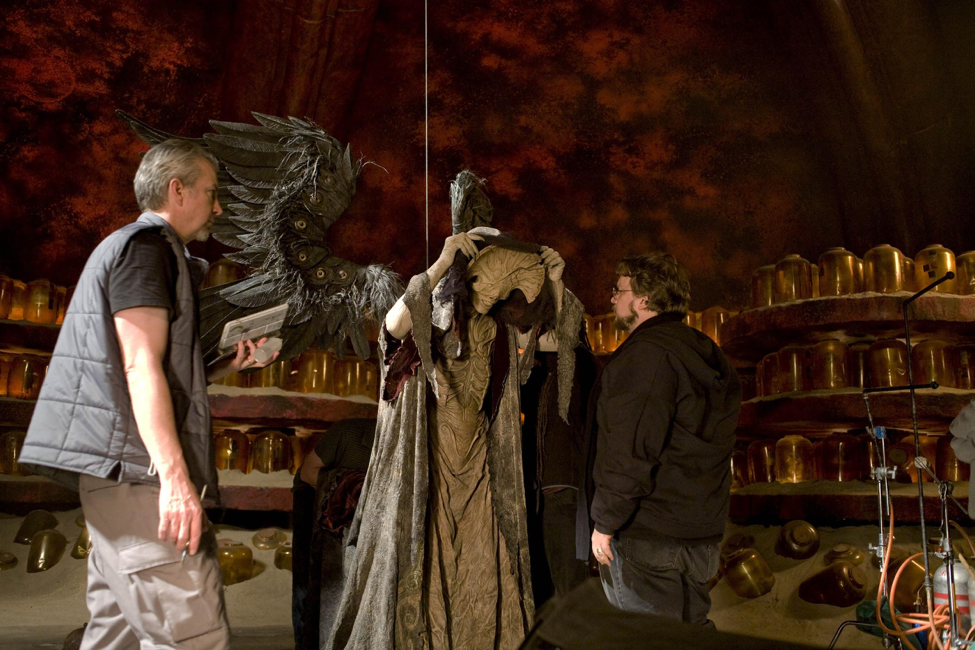 We have the Angel of Death placed in the lobby of At Home with Monsters. It works as a kind of a totem, an icon of the show. We were so in love with it when we first saw it at Spectral. Totally amazed by its beautiful otherworldliness. Walk us through the process of how it came to fruition, from the design stage to the object in our lobby.

The first time I saw the Angel of Death was in Guillermo’s notebook, in his beautiful, leather-bound notebooks he fills up during production. The wings with eyes on them were in the first script Guillermo showed me before Hellboy, one that didn’t get made. I had read about the character there, then it evolved. This was in Guillermo’s head for a while. We hired people for the sculpture, the costume, the design of the amazing wing mechanisms, makeup, puppeteers for the wings. It was a wonderful process. We were honored to be part of the process with Guillermo’s vision to create the character. Guillermo is all about giving artists a sense of ownership. He said to everyone, take what you see and make it your own, make something beautiful. It’s always like that with him. He’s an artist’s artist. He respects art and artists and process. He nurtures. That’s why we love working with him. 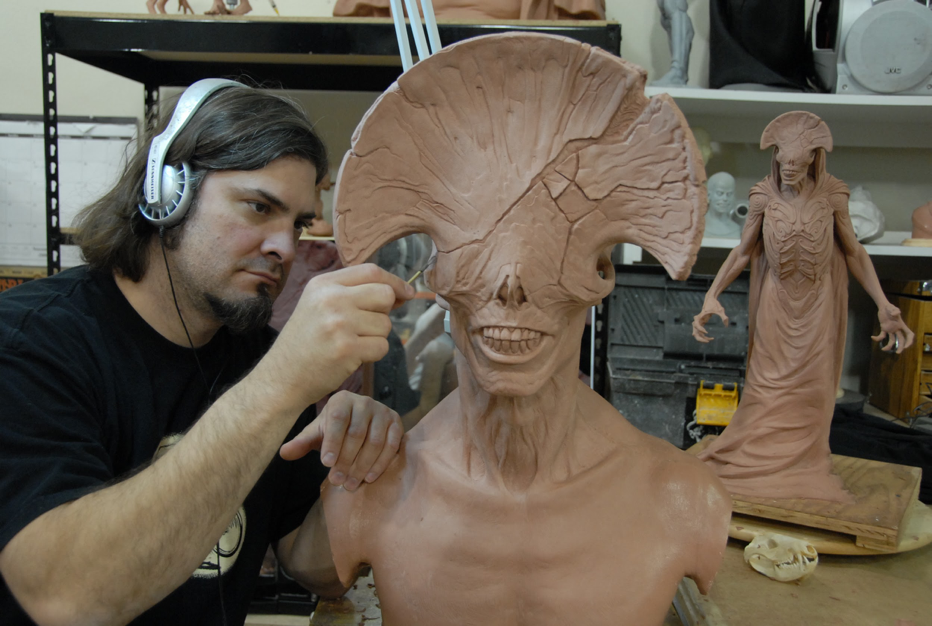 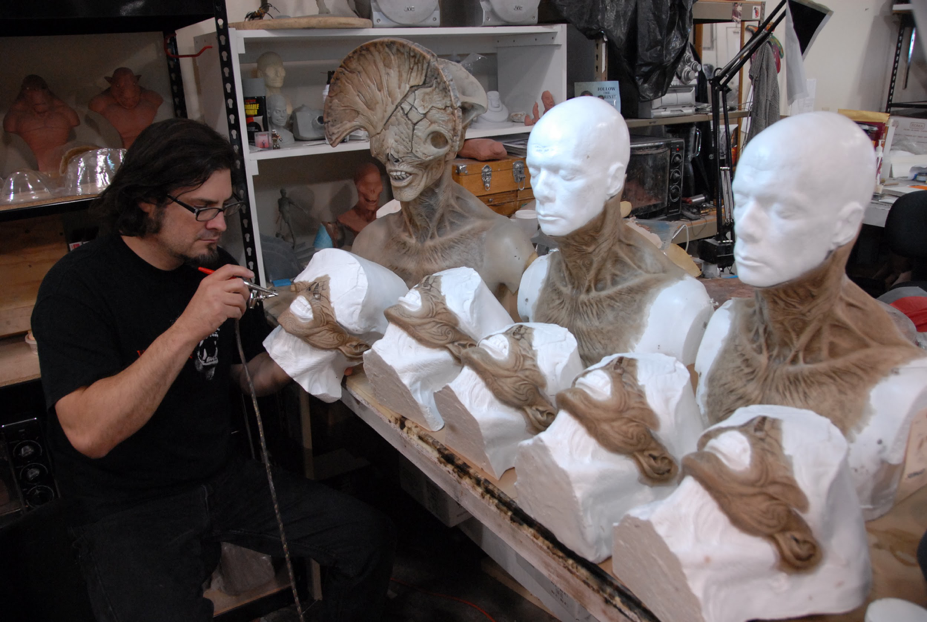 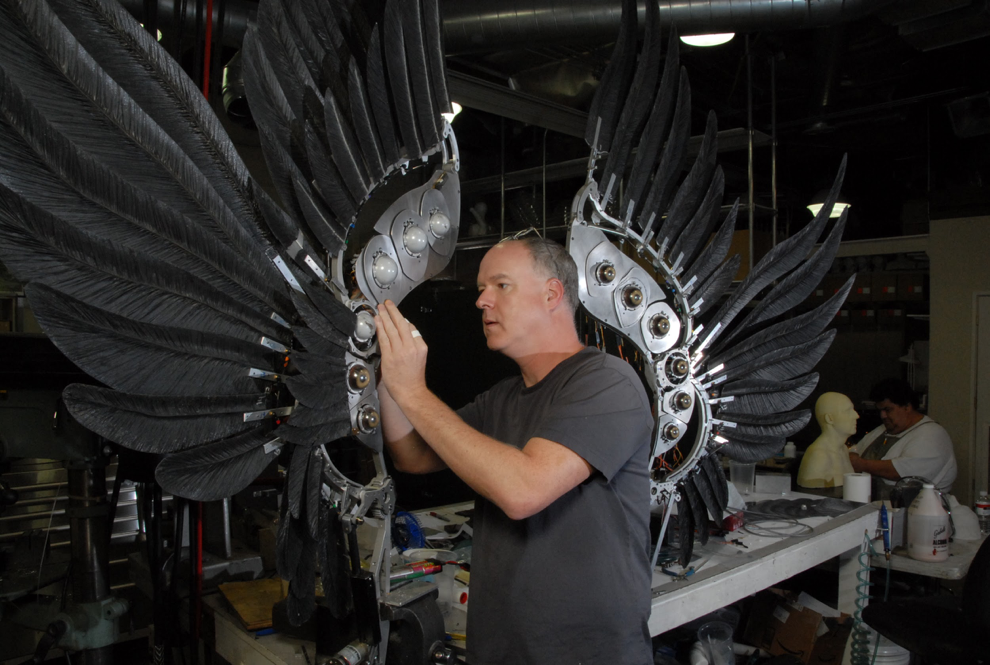 Doug Jones trying out the Angel of Death suit, courtesy Spectral Motion from LACMA on Vimeo.

Guillermo del Toro: At Home with Monsters is on view through November 27. LACMA is also presenting a series of the director’s films; the next one is Hellboy at 7:30 pm on Friday, November 4. This conversation was condensed and edited for clarity. 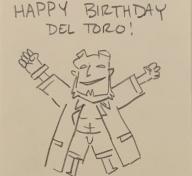 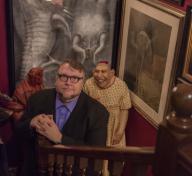 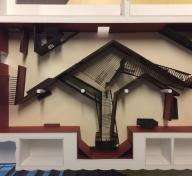