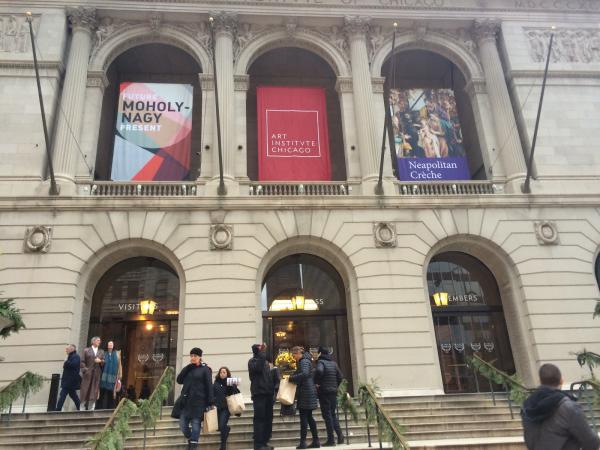 Stairway to the Art Institute of Chicago decorated for the holiday season, with Moholy-Nagy: Future Present banner at the top left of the image, photo courtesy Hope Flores

The work of László Moholy-Nagy and other great artists and educators of the Bauhaus was one of the highlights in my first art history course, but I had no way of knowing I would get to know his work intimately just a few years later through an Andrew W. Mellon Undergraduate Curatorial Fellowship at LACMA. This nationwide fellowship program aims to address a lack of diversity in the makeup of museums’ professional staff members, and identifies college students dedicated to pluralistic viewpoints in art museums  who hope to pursue careers as curators. Other participating museums include the Art Institute of Chicago (AIC), the High Museum of Art in Atlanta, the Museum of Fine Arts, Houston, and the Nelson-Atkins Museum of Art in Kansas City, Missouri. I learned of the fellowship through the art history department at East Los Angeles College and participated first in a week-long Mellon Foundation-funded Summer Academy at LACMA, after which participants are given the opportunity to apply for the two-year fellowship. 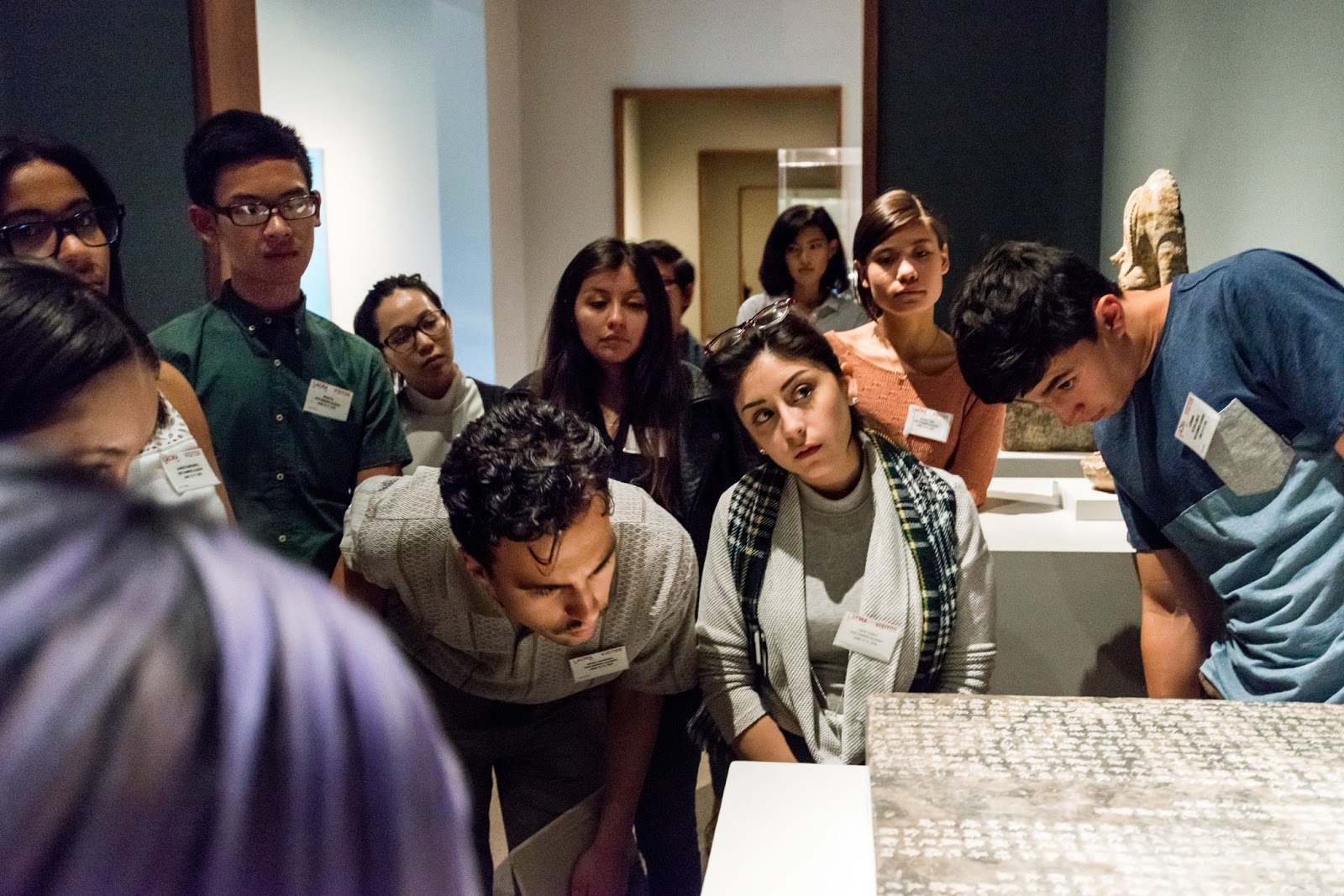 I decided to apply and was awarded one of LACMA’s two Mellon Undergraduate Curatorial Fellowships for 2016–18. Instrumental to my commitment to working in the arts were previous internship experiences like the Getty Multicultural Undergraduate Internships (MUI). Through the Getty’s MUI program, I held summer internships at Self Help Graphics & Art in 2015 and the Museum of Latin American Art in 2016, which subsequently led to positions at LA Plaza de Cultura y Artes and the Vincent Price Art Museum. These experiences connected me to the greater arts community in Los Angeles, and I deeply appreciate the network of peers and mentors I’ve been able to build. Happily, this generative pattern of mentorship continues for me at LACMA. 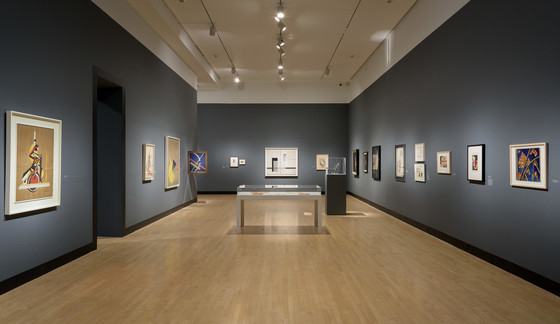 As a first-year fellow, I am mentored by Carol S. Eliel, curator of modern art at LACMA, who most recently added Moholy-Nagy: Future Present to an extensive curatorial curriculum vitae spanning more than 30 years. Moholy-Nagy: Future Present is the largest retrospective of Moholy’s work in the U.S. in almost half a century, and Carol co-organized the exhibition with curators Karole P. B. Vail at the Guggenheim Museum and Matthew S. Witkovsky at the AIC. With Carol’s guidance I became more familiar with Moholy’s work through the exhibition’s extensive checklist, and learned to see beyond the Constructivist compositions I came across in my art history course to understand the humanism and social concern at the heart of Moholy’s drive to create, design, and educate through a myriad of mediums. I then witnessed the last phase of the exhibition come together at LACMA as Carol made final decisions regarding everything from exhibition signage to conservation and object placement, leading up to the public opening on February 12. I also learned from Carol about the curatorial process prior to what I was able to witness firsthand, and the unique challenges of working with multiple institutions on a large-scale exhibition. Although a  show organized by three different institutions with thousands of miles between them may have some obvious challenges, I came to realize and appreciate the unparalleled benefits of having multiple iterations of the same retrospective.

Indeed, the idea of iteration and reiteration is central to Moholy’s praxis of art, and the traveling nature of the exhibition reflects that concept. Through his theoretical teachings and artistic practice, Moholy encouraged his audience to alter and shift their perceptions of the world through what would become known as his New Vision, an artistic approach that was defined most prominently in his photographic experimentations. He brought this New Vision with him as he fled an increasingly fascist Europe and established the New Bauhaus in Chicago in 1937. It was in the U.S. that he would dedicate himself to rendering his vision into reality until his death in 1946. His school became the Institute of Design, existing today as a graduate program at the Illinois Institute of Technology, and remains a testament to his New Vision. 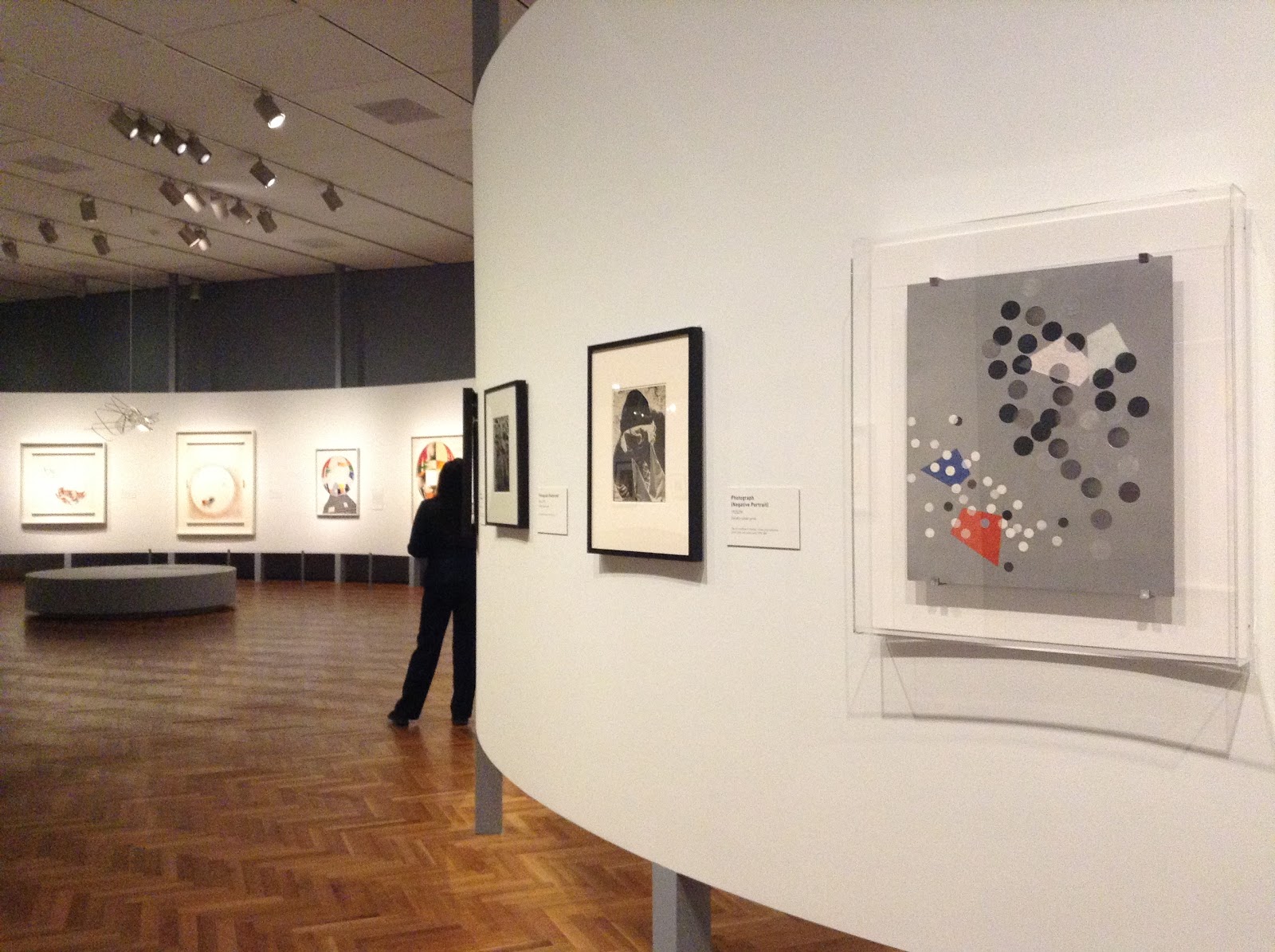 In early December of last year, I was able to visit Future Present at the AIC, also a partner museum in the Mellon Undergraduate Curatorial Fellowship program, in a unique opportunity to see Moholy’s work in the city where he spent the last years of his life. I was able to connect with AIC’s Mellon Undergraduate Curatorial Fellows, Yady Rivero, Alejandra Vargas, and Margarita Hernandez, and we shared our fellowship experiences over a day of workshops and gallery tours. I also met with Liz Siegel, associate curator of photography at the AIC, who led me through the spacious exhibition and gave me insight specifically into Moholy’s photographic work in Chicago. (In addition, she walked me through the companion show to the main exhibition, Abstract/Object, a study of contemporary photography in the context of Moholy’s work.) 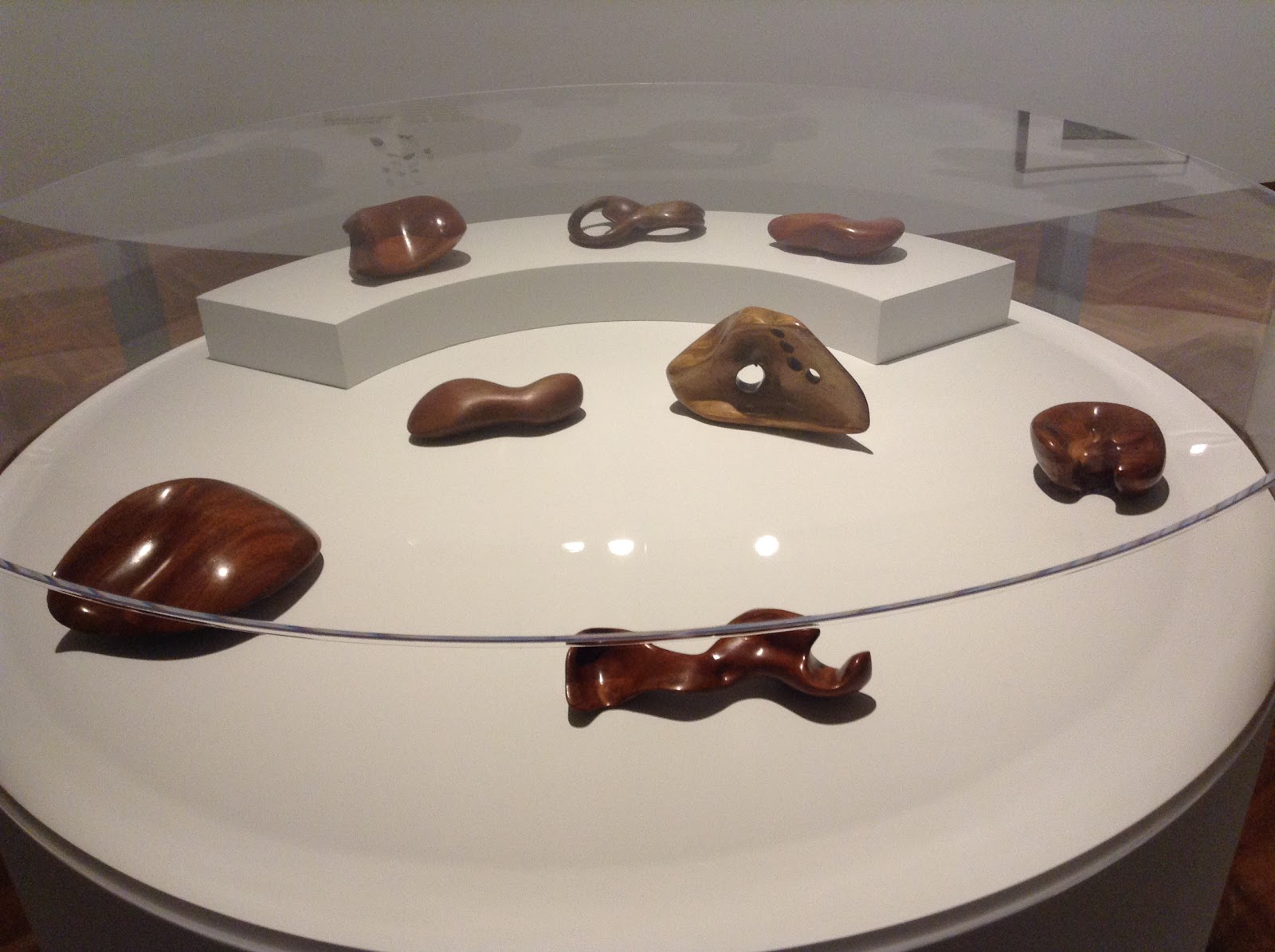 Vitrine at AIC featuring wooden ergonomic hand sculptures made by students of Moholy-Nagy in Chicago, not included in the LACMA iteration of Moholy-Nagy: Future Present, photo courtesy Hope Flores

The exhibition at the AIC was directly inspired by examples of Moholy’s own exhibition design and featured stilted walls and large, hanging, translucent dividers that organized the space into smaller thematic rooms. 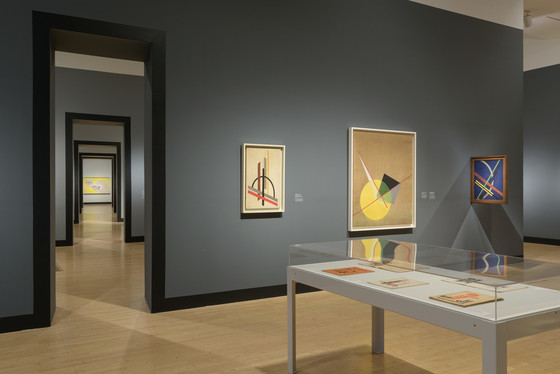 When I returned home to shadow the exhibition installation, I recognized key differences in LACMA’s architecture for the exhibition, designed by Johnston Marklee, which centers on a tapered, optically illusive hallway that cuts down the center of the exhibition and visually echoes the spirit of transparency, dynamism, iteration, and reiteration at the heart of Moholy’s work. Although I knew that the number of artworks in Future Present had been slightly pared down from the AIC to LACMA, many of the works and installations, including the Room of the Present, remained the same and served as a point of reference from which to study specific differences in exhibition design and layout. 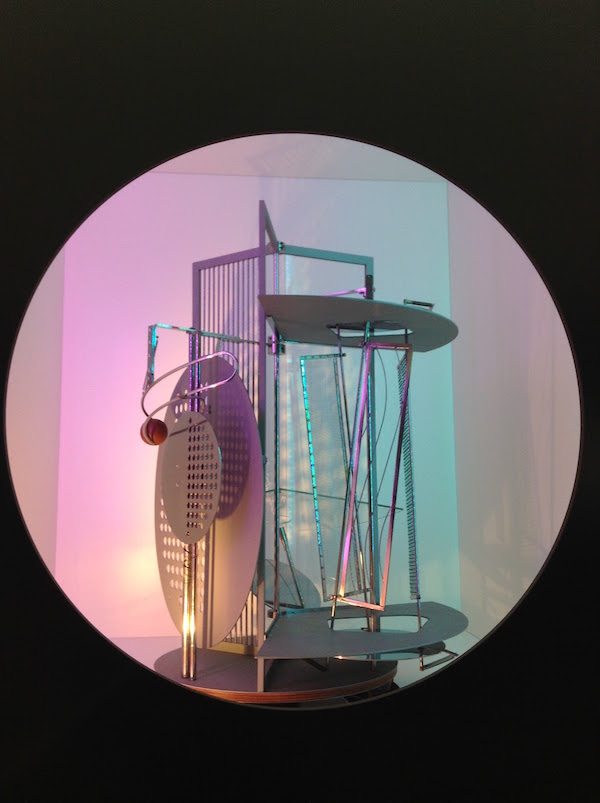 The perspective I gained in Chicago also informed my contributions to LACMA’s own companion show, Light Play: Experiments in Photography, 1970 to Present. Eve Schillo, assistant curator of the Wallis Annenberg Photography Department, and Deirdre O’Dwyer, research assistant in the Modern Art department, organized the show with Carol’s guidance, and were gracious enough to include me in critical conversations defining the show’s thematic criteria and checklist. I shadowed Eve and Deirdre’s collaborative process and was happy to write object labels for works in the exhibition by Jennifer West and Phil Chang. Light Play highlights contemporary examples of Moholy’s photographic legacy that experiment with light and shadow and in many ways exemplify his New Vision, and I am using my research for the show to inform an independent, academic project on the spirit of humanism central to Moholy’s photographic New Vision. I will be presenting my work this summer in Houston at the Mellon Undergraduate Curatorial Fellowship Program’s National Convening, an annual conference that brings together fellows, coordinators, and mentors from each of the participating museums for presentations, lectures, and networking opportunities. 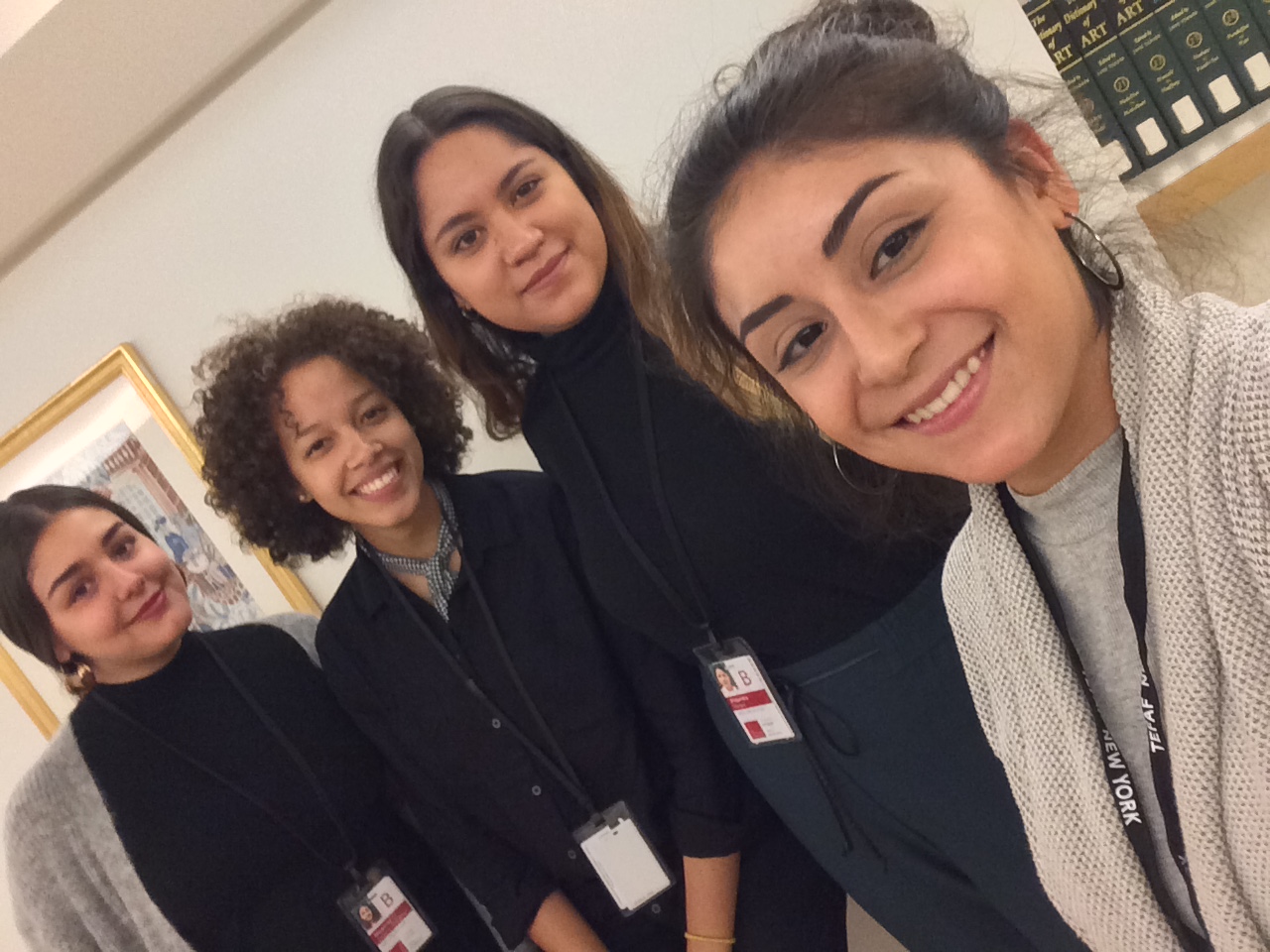 This summer, I will also be transitioning into the full-time portion of the fellowship at LACMA, and am interested in organizing opportunities for youth and their families to explore new ways to interact with LACMA’s modern art galleries. Moholy believed that “the experience of space is not a privilege of the gifted few, but a biological function,” and it is my aim to keep museum and art spaces representative and accessible to the many and not just the few. During the time I’ve spent in museums and art spaces, I have come to recognize the central importance of using these spaces to cultivate active communities. Programs like the Mellon Undergraduate Curatorial Fellowship and others that promote diverse and inclusive representation in the arts allow multiple perspectives and narratives to be shared within established cultural and other art spaces, and are vital to ensuring a future museum leadership that reflects the rich pluralism of our community.