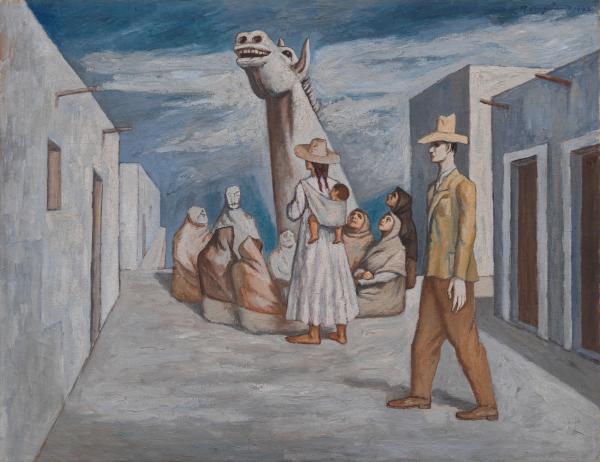 Mexican artist Raúl Anguiano (1915–2006) had a broad and varied career. He first arrived in Mexico City in 1934 from Guadalajara, where he had studied at his hometown’s Open Air Painting School, part of a network of schools that encouraged students to focus on local subjects. In 1937 Anguiano became a founding member of the Taller de Gráfica Popular, a collective print workshop dedicated to the creation and dissemination of sociopolitical art. During the 1930s and 1940s, Anguiano gained increasing recognition, and created works that drew simultaneously on cubism and surrealism, while also exploring revolutionary themes and creating socially committed art.

"I met the Anguianos nearly twenty years ago, and we are just delighted to be the recipient of a generous gift from the artist’s widow, Brigita Anguiano, of five paintings from this pivotal moment in Anguiano’s career. This important group of works now joins LACMA's rich holdings of Mexican modern art, adding more depth to our collection in this area," said Ilona Katzew, Curator and Department Head of Latin American Art.

One of the most striking paintings from this group is The Call of Instinct (1942). The haunting depiction of the village recalls the metaphysical paintings of Giorgio de Chirico (1888–1978), and Pablo Picasso’s famous Guernica (1937). The juxtaposition of seemingly incongruent elements contributes to the scene's fundamentally enigmatic sense, leaving it open for interpretation. The other works from the group range from portraits to surrealist-inflected works, including Space and Dream (El espacio y el sueño) (1934), The Servant (La sirvienta) (1938), Girl with Green Coat (La muchacha del abrigo verde) (1938), and Back to Earth: Folk Legend (Volviendo a la tierra: leyenda popular) (1941).

Beginning in the 1970s, Anguiano developed a strong connection with Southern California, where he had a second home, taught, and painted murals at the Mexican Consulate in Los Angeles (1999), the Bowers Museum (1999–2000), and East Los Angeles College (2002). These projects have solidified the place of Anguiano’s muralism in Southern California, making this generous gift especially relevant.